Dawn over the banks of River Ganga 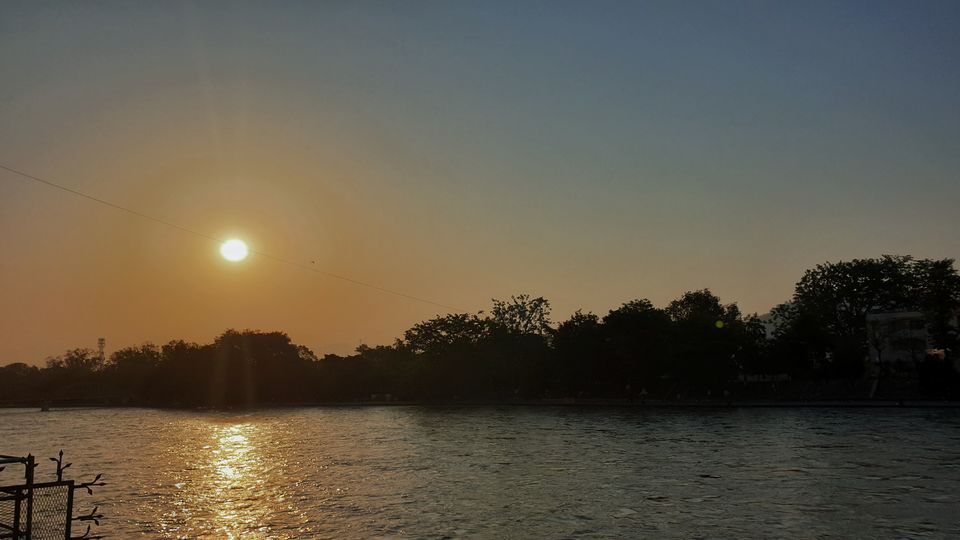 After a rejuvenating holiday in the hills, we decided to take a detour to a spiritual destination. This detour turned out to be one of the most divine experience for us.

We left from Mussoorie around 9 in the morning. It takes about 2 ½ hours to reach Haridwar. But we planned to go to Rishikesh and visit the Lakshman Jhula on the way. There was heavy traffic close to Rishikesh. Hence we had to make a choice of either visiting Lakshman Jhula or witnessing the Ganga Arti at Haridwar. The obvious choice was the Ganga Arti and so we headed towards Haridwar, ditching the idea of a halt at Rishikesh.

While getting into Haridwar, we passed through Har ki Pauri and it being a Sunday, the banks of River Ganges were crowded with people waiting to take a dip in the Holy River.

We checked into our hotel in the afternoon. We were very apprehensive as to how our experience of the Ganga Arti would turn out. We had been told that the place would be too crowded during the Arti and that we should reach the place much before the designated time.

But that was to be experienced later. For now, it was time to get to the private enclosure that our hotel had. We could access River Ganges through this private enclosure, take a dip here or just sit on the banks and soak in the serenity.

Our hotel staff too had a similar advice like our friends that we should reach Har ki Paudi soon enough so that could secure a place for ourselves, to sit while we witness the Arti. So we reached there at about 1710 hrs. We took a tuk tuk (similar to a rickshaw) from our hotel to reach the there. The charges for this ride were Rs. 20 per seat.

The apt place to witness the Arti is the place beside the Ganga Temple or on the banks opposite this temple (adjacent to the Clock Tower). However, there is so much crowd that people gather all around the area to have a glimpse of the Arti.

At the banks on the side of the Clock Tower, one can find many vendors selling eatables and water. One can even buy a mat to sit on. That is where we chose to sit too.

The main Ganga Arti begins at around 1915. This is truly a once in a lifetime experience. Even for the less religious beings, this is recommended simply for the beauty of it all. So many lamps being lit at precisely the same time, in sync with the sound of the Arti. One tends to forget all that is around and all that one is immersed in are the lights around and the reverberating sound of the Arti. I wouldn’t be surprised if there were people who went into a trance in such an atmosphere. It is one thing witnessing an Arti within the walls of a temple, but it is totally overwhelming to witness an Arti under the open skies amidst so many people. The sound of the hymns, so many lamps lit at the same time, its reflection in the river, it is all so breathtakingly beautiful that one may feel more than happy to come back for the Arti. Certain things have to be experienced personally and not read or heard from somewhere or someone. The Ganga Arti at Haridwar is one such experience. No matter how many adjectives I use, I will never be able to do justice to it.

Not to be missed

It is hard not to notice this and it is imperative to mention it that despite such a huge crowd, the place around the banks, the paths leading to it are very clean and devoid of much littering. A truly commendable job on the part of the authorities there. However, while the banks may be litter free, the bridge through which one has to walk through to reach the Tuk Tuk stand is not hawker free. There are many vendors there selling souvenirs, vermilion, eatables etc.

But that is just a little bit of inconvenience, if one may call it so. A visit to Har Ki Pauri to witness the Ganga Arti is a must.

One can travel to Haridwar from Delhi in around 5 hours. There are ample hotels and lodges on the banks of River Ganges, some of which having private enclosures too.

A once in a lifetime visit that will surely be a memorable one.