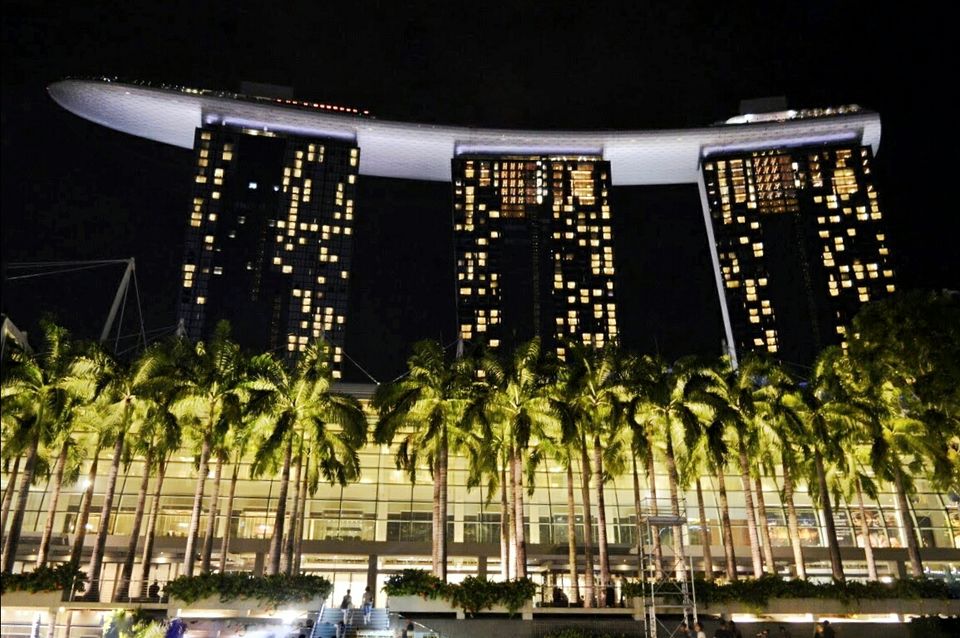 Changi Airport and Srilankan Airlines - So we landed to the world's best airport and felt like we have landed to some sci-fi city! What a transformation from moderate Colombo Airport to Changi Airport! Since we had same airlines and long transit hours from Mumbai to Colombo to Singapore, we had requested that we receive our baggages directly at Singapore. Upon reaching Changi, we started hunting our baggages and they nowhere to be found. We checked with lost and found department too but that was not much help. After speaking to few officers, we were told to check the belt where our airline baggages were rolling and there we saw it lying on the ground, unattended, mishandled and damaged near the belt (it was lying there since 2 days and nobody bothered to move it!). We never expected Srilankan Airlines would be so irresponsible and careless! After picking up our bags, we found one of the bags handle broken and my bag's key code was tempered which didn't let me open the bag until we had to break the key lock to open it (ufff!). Not a good experience on Changi!. Moving on to further we had to go North Point mall from the Airport.

Northpoint Mall - Our friends were meeting us here in Yishun. We took the bus from Airport with all our luggage. Despite so much luggage with us, travelling through terminal to bus terminal was soo easy and fuss free. We paid 5SGD for the bus ticket and it dropped us exactly outside the mall. We met our friends here. Dropped the luggage in the car and headed to Kopitiam (foodcourt). The sight in Kopitiam was dreading with all kind of meat hanging! Being a Jain, stepping here itself was more like a sin. It took a lot of courage for me to sit there for sometime without looking around and without any food and drink! Then we headed to Botanical Gardens.

Botanical Gardens - We took the MRT from Yishun to Botanical Gardens. First thing we did is to fetch MRT map in English, second is buy Ezlink cards that give us an access to MRT, buses etc. through one card. The garden is huge. You atleast need half a day or a full day based on your interest. Lack of sleep and too much travelling was calling my body to rest so we lasted here for not more than 2 hours. The place is very interesting and neat with a lake inside. Very country like! Then we headed to Mustafa Centre.

Mustafa Centre - After taking the MRT to Mustafa Centre, we stepped inside a small world of shopping at Little India. We shopped some chocolates and goodies from here. This is a 24-hour shopping mall.

Little India - It is an ethnic district in Singapore. It has too many Indian restaurants. Being a jain and hungry by now, food is what was haunting me! Not ready for any sort of experiment on day 1, We stepped into Kailash Parbat and had chole bhature. And I was very sleepy by now that I was sleeping even when I was standing. So by the time, other friends looked around for shopping, I picked up a chair from street shop and slept until they were done. Then we headed to Clarke's.

Singapore Checkpoint - We drove to Singapore checkpoint. The car was stopped at immigration centre. We handed out passports to the immigration officer without getting out of the car! and then we were on Malaysian - Singapore Box bridge that connects both countries!

Clarke Quay - We drove to Clarke's and boy, what a place this is! Buzzing with nightlife and young singaporean's, this place reminded me of my Phuket times. Still drowsy, I somehow managed to stroll around this place and sink into the liveliness! The sleep that haunted me was taken over by loud music! Clarke Quay is a historical riverside quay in Singapore, located within the Singapore River Planning Area. One of the best attractions in Singapore! After this we headed to Malaysia! Yay!

A group of few friends decides to hop on to 2 countries and travel together! We already had a friend living in Malaysia and after loads of planning and booking (only 20 days ahead of the trip!), we started off to the new country and expedition!. My ticket was booked just a week before the travel date. My Malaysian visa was received on same date of travel whereas Singapore eVisa was issued immediately. We tried booking through Singapore Airlines but tickets were costing us bomb as it was short period of booking. Finally we settled on SriLankan Airlines with long transit hours so we can have a day in Colombo and nearby. We deliberately booked our tickets with long transit hours and it proved to be wise decision. So on 14th early morning we left for Colombo. We had an entire day in Colombo. Then we reached Singapore on 15th night and on 16th night we were in Singapore and in Malaysia. So we had 4 nights in 4 different countries! (India, Srilanka, Singapore and Malaysia!). What and how we did in Srilanka is mentioned in another post.