The best memories are born out of accidents !

Well at-least when you plan your trips.

It was indeed accidental when I bumped into this site on the internet.

And I immediately knew where I should be the next weekend.

A39, the highway which runs from North Devonshire to North Cornwall is lovingly referred to as the Atlantic Highway. And how many of you have even heard of it ? We know the American counterpart. We know of the beautiful coastline drive in Australia (though not Atlantic). Even the Brits don't seem to be much aware of their own version.

Secret and Exotic as it sounds, still I planned to improvise and design my own version of a Coastal Highway route in England. This route would catch up with A39 after Barnstaple in North Devon and chart the roads closest to the ocean, right along the corners of the country. The roads that stand between the land and the sea.

I planned to reach Portreath, a small beach town in South Cornwall by the end of the day driving down straight from Central London. This route should cover the A39 and a little more of the coastal Highways of England.

I started the day early at around 7 AM (pretty early for a late English Autumn morning) in the new Renault Captur. It was a rented car from Hertz, a leading car rental company. The car had come quite cheap at £12/day.

Driving within London is a treacherous job with the speed limit being a strict 30 mi/hr and I yearned to get out on the highway as soon as I could with that speed. I took the M4 towards Bristol, from where I will go on to take the road closest to the blues. After taking the M5 diversion near I was headed towards the town which almost every Bengali remembers to this day, Taunton. I still half-expected to find some red cricket balls lying around the city. I took and exit on purpose towards the city and drove around the fabled stadium.

So I had already taken a detour from the original route and now I had to get back to the coast. So another improvisation came in the form of the route through Exmoor National Park to make the drive more enticing. And enticing it was. The pictures of the roads through the National Park proves that. 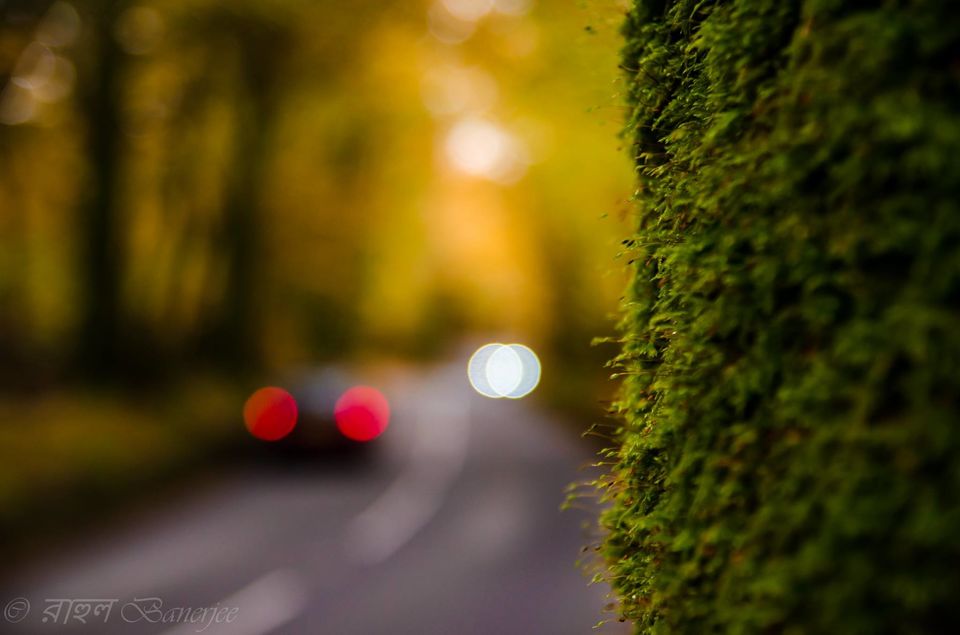 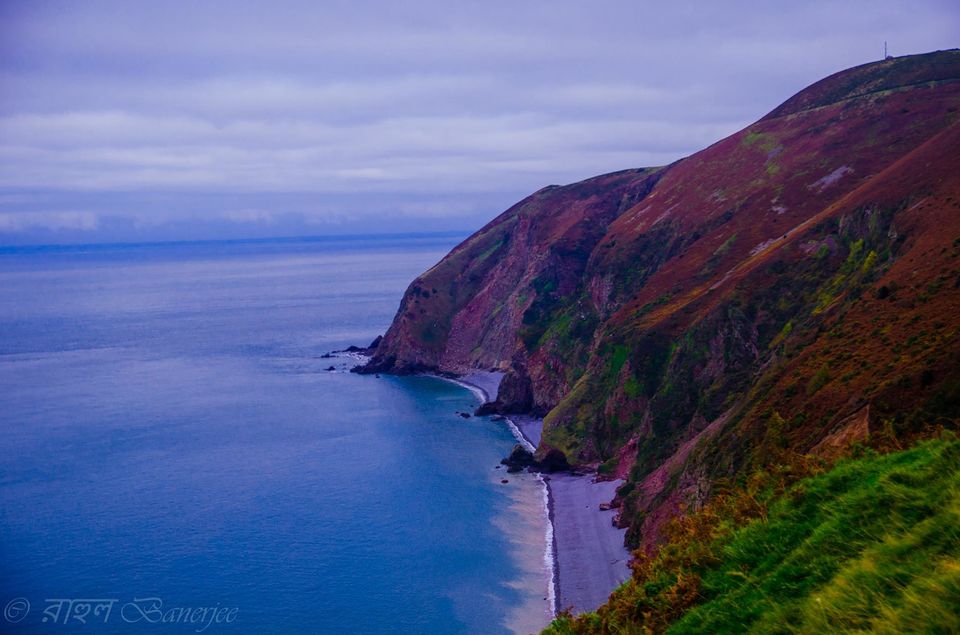 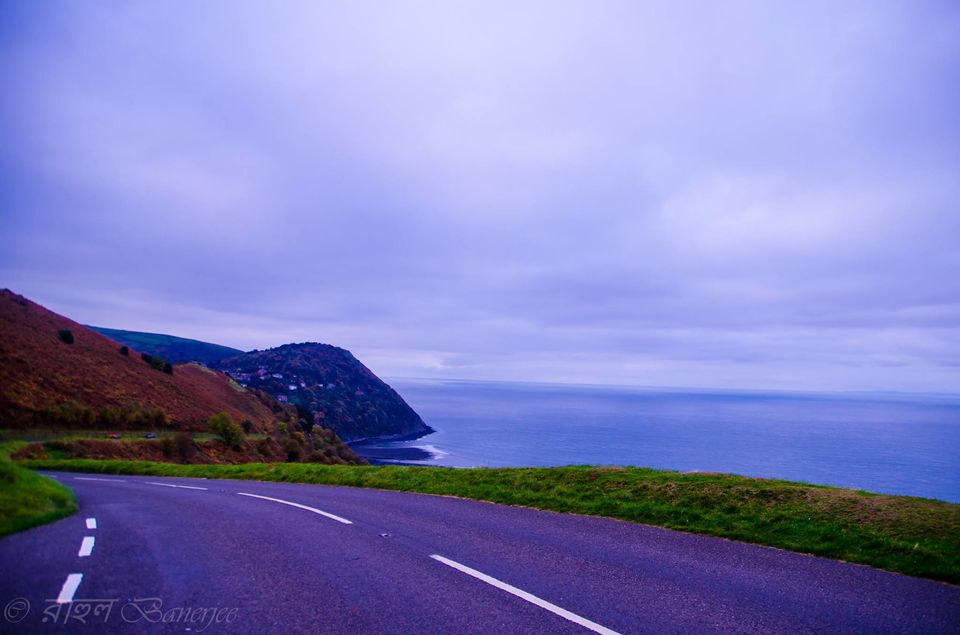 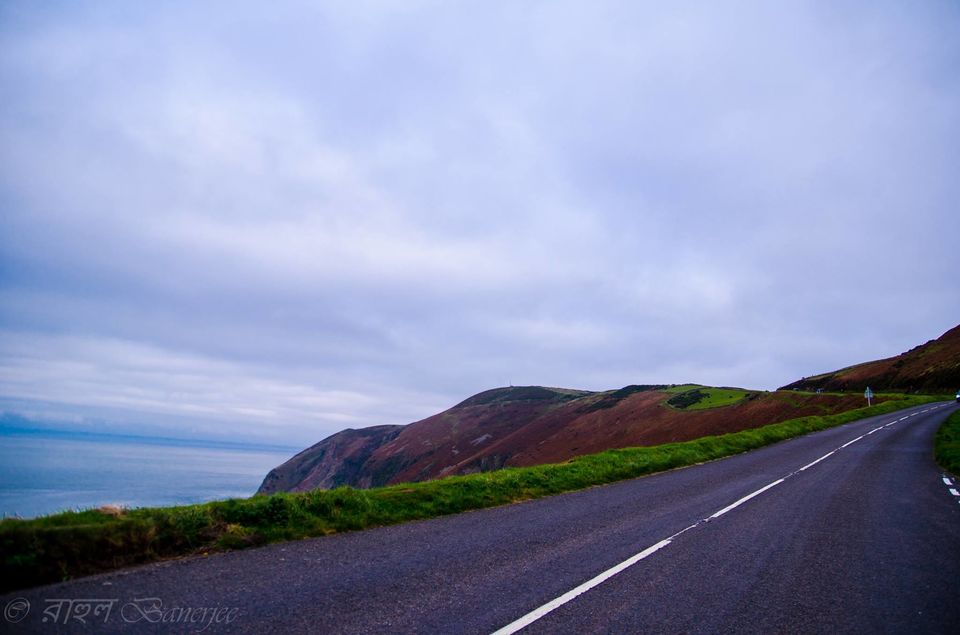 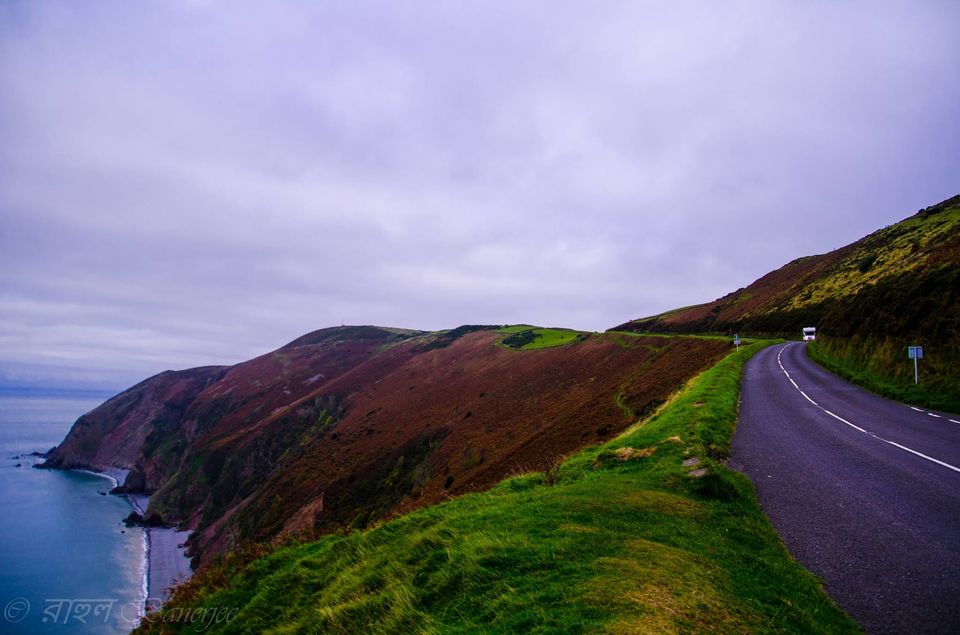 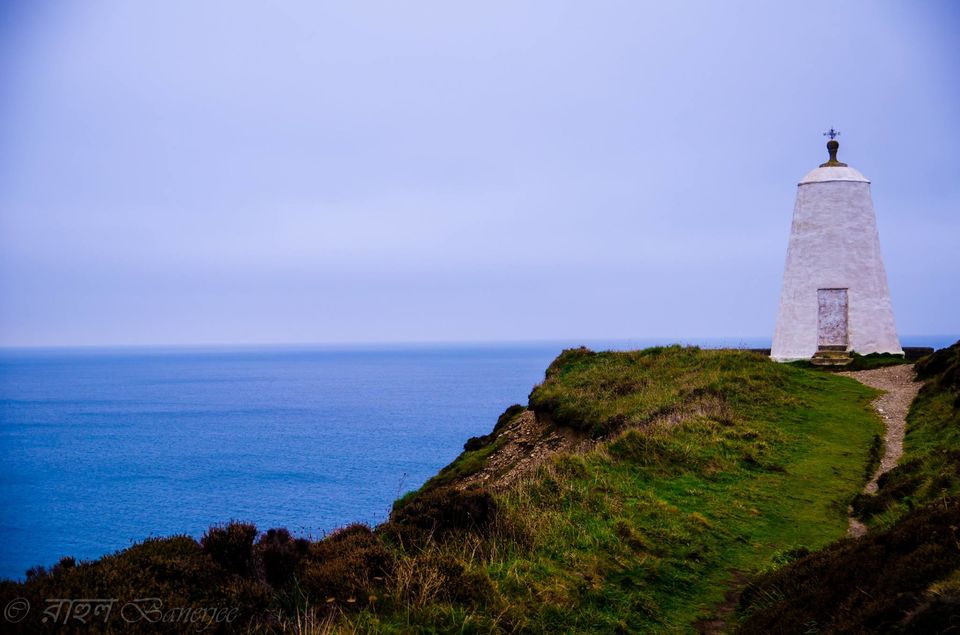 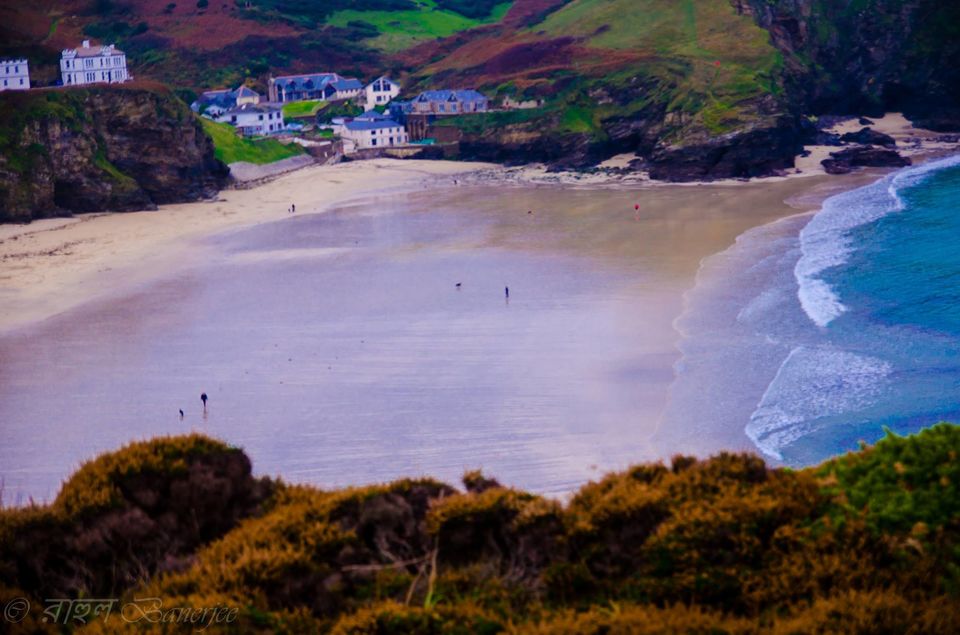 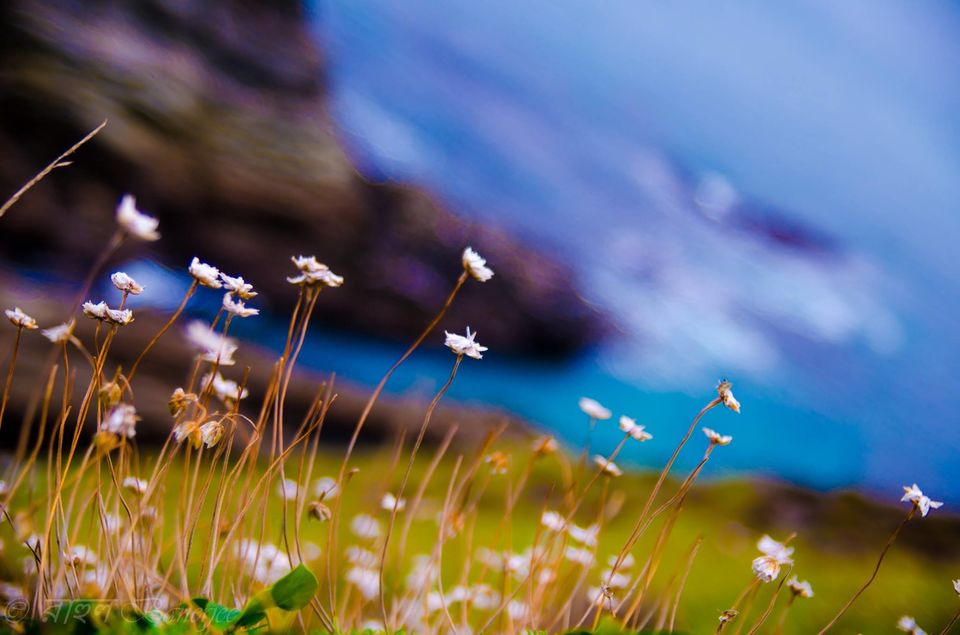 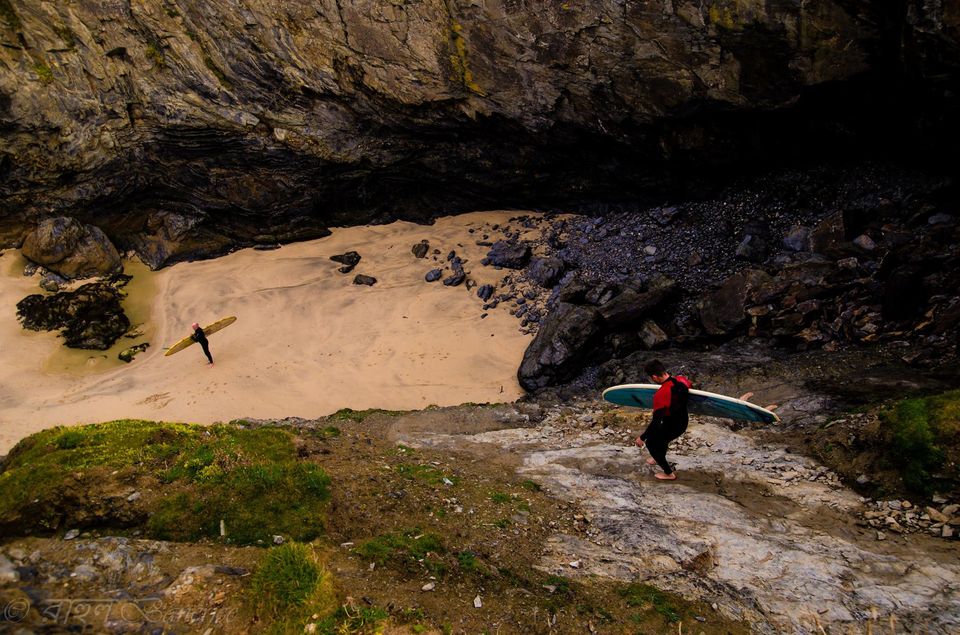 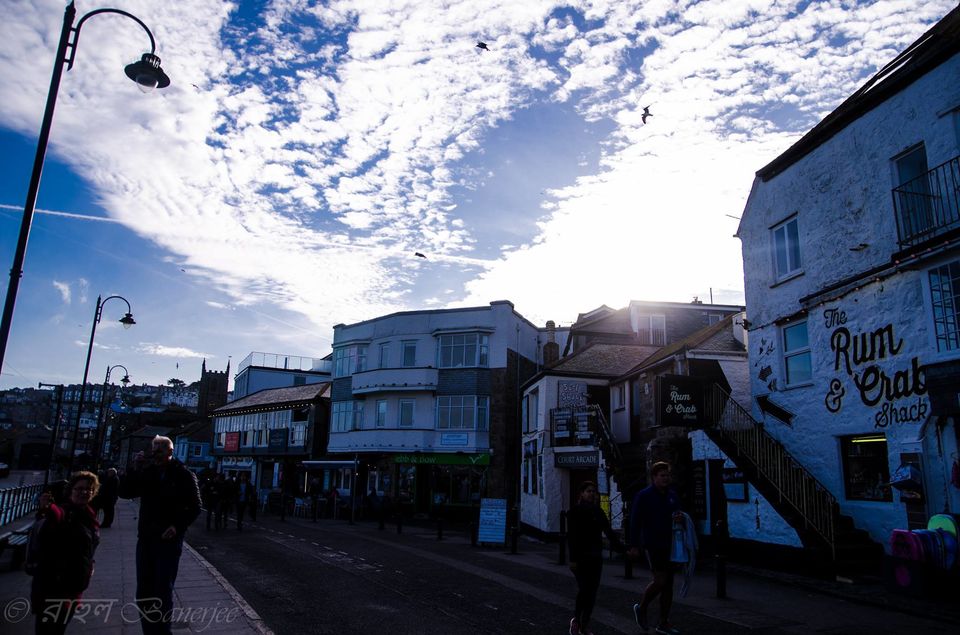 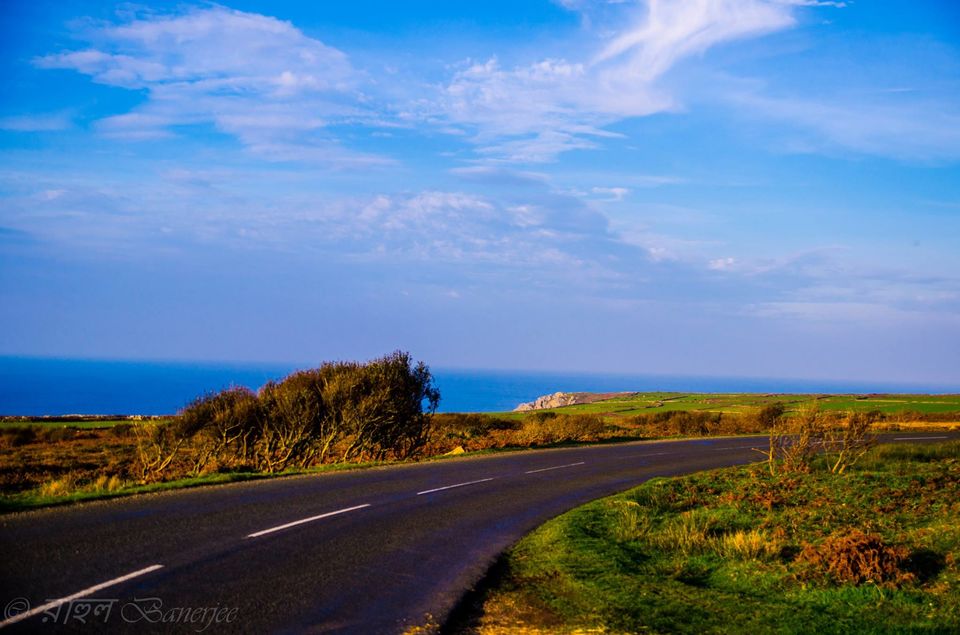 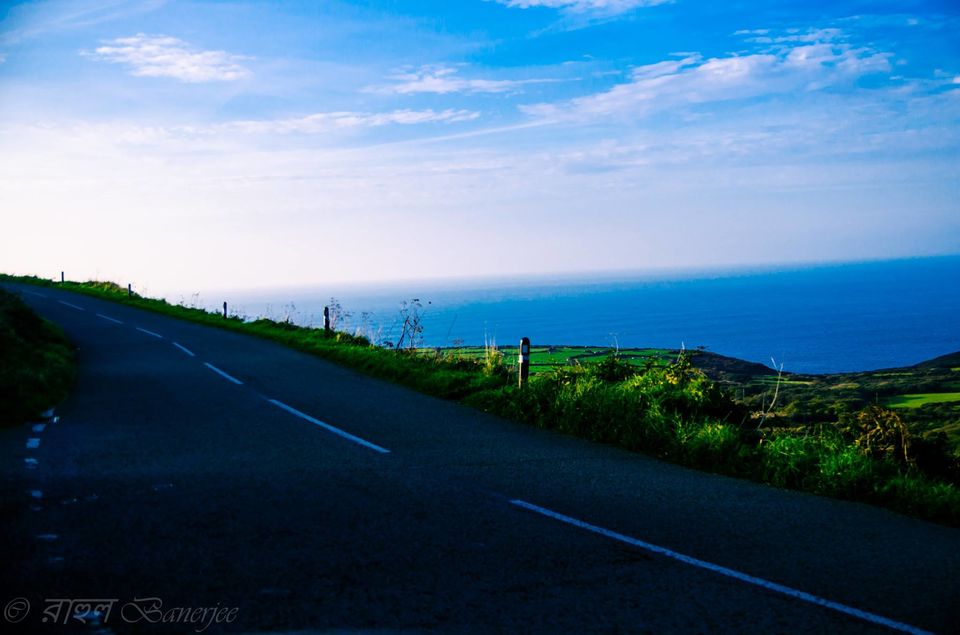 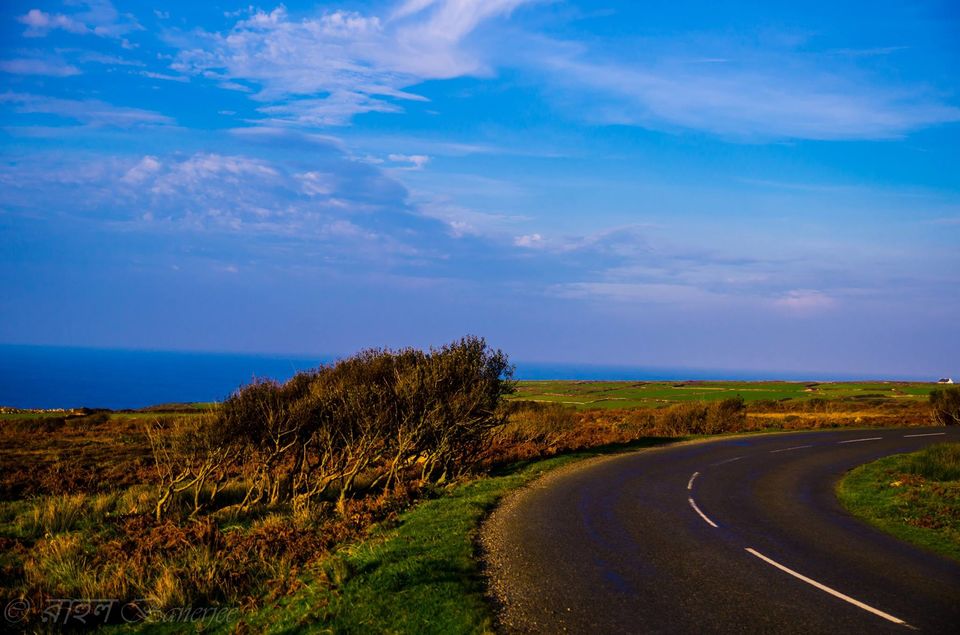 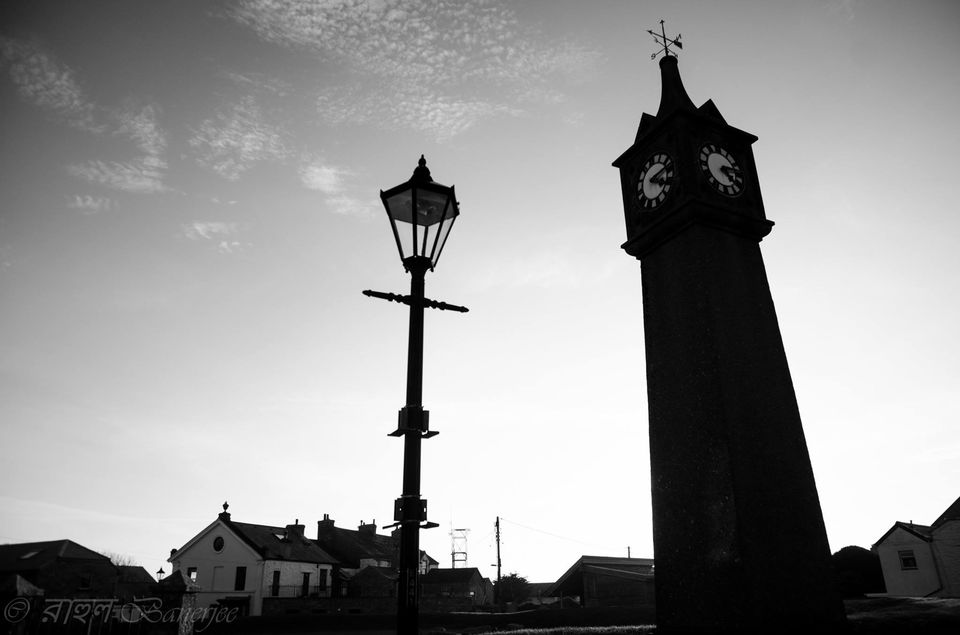 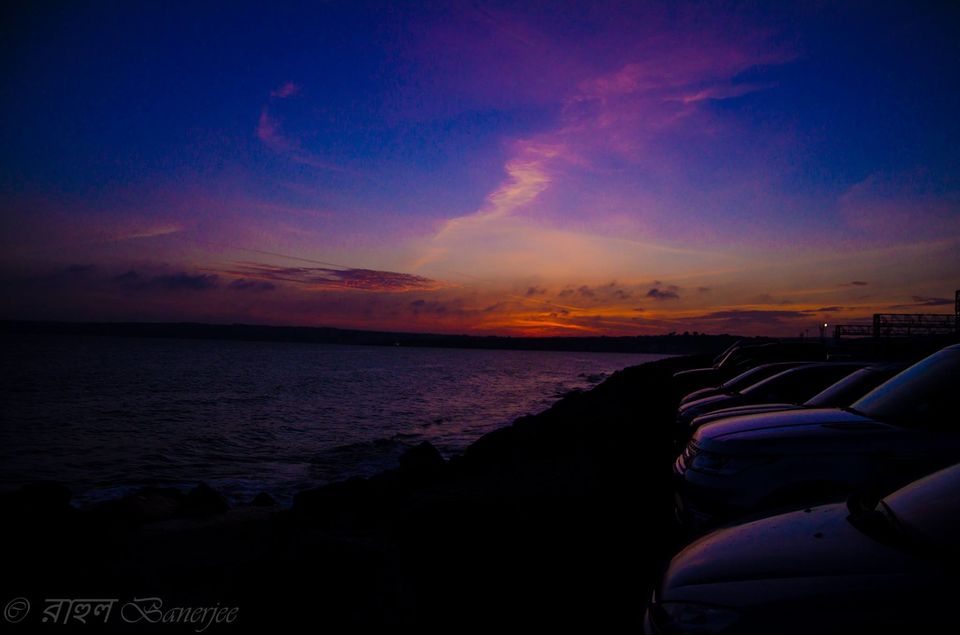 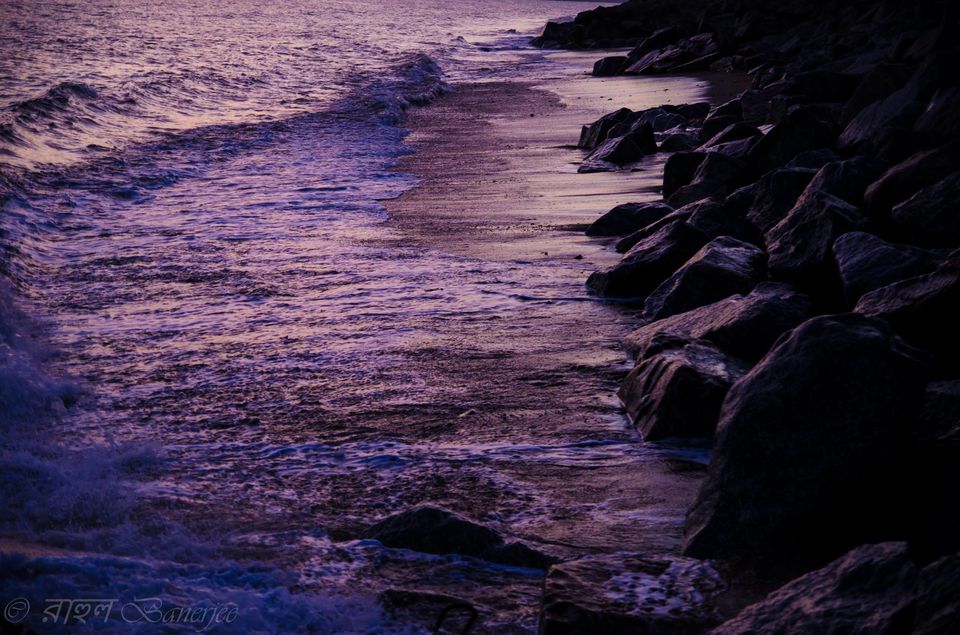 I still remember how disgusted I felt when i found out how different these 'Gora' National Parks are and how dull compared to our Desi National Parks. National Parks in India mean exotic wildlife, an elephant or two on the roads if not Nilgais and if you are lucky then a tiger or a lion. But I have got used to the English way of christening a bunch of trees as national parks.

As I exited the National Park, I turned towards Barnstaple. That's where the A39 starts and goes south along the coast.

Yes, the roads are beautiful, especially in small stretches near Bideford and Bude. But honestly, it didn't live upto my expectations. And my expectations would be fulfilled to the brim and overflow for the rest of my life when I would travel far south the following day.

Till then, here's how the A39 looks like while you drive.

Of course it was a beautiful drive ! But not as beautiful as the next day. I stayed up the night at Portreath, a beach town. The AirBNB had an excellent location at the ledge of the hill which hung over the sea crashing down at its feet.

It was 9 PM, when I finally reached Portreath, after making numerous pit stops on the way.

I could not afford to be late as I had to cover around 350 miles today. So I started off towards the next beach on the coast. My target was to cover entire southern coastline or the Cornwall coastline. 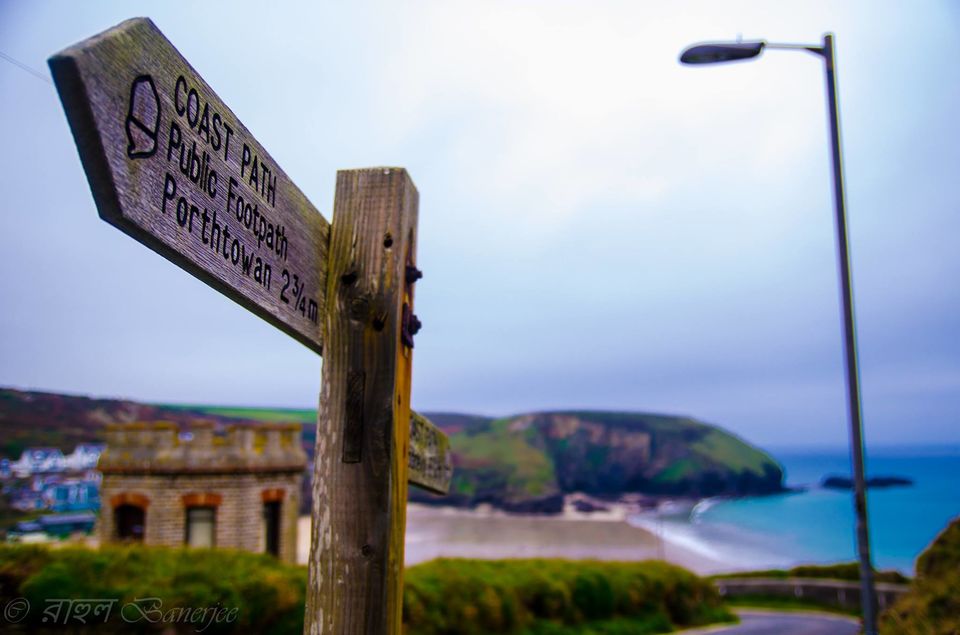 But before I post more pictures, have a look at the route that I took which definitely says a lot in the Google Maps itslef. 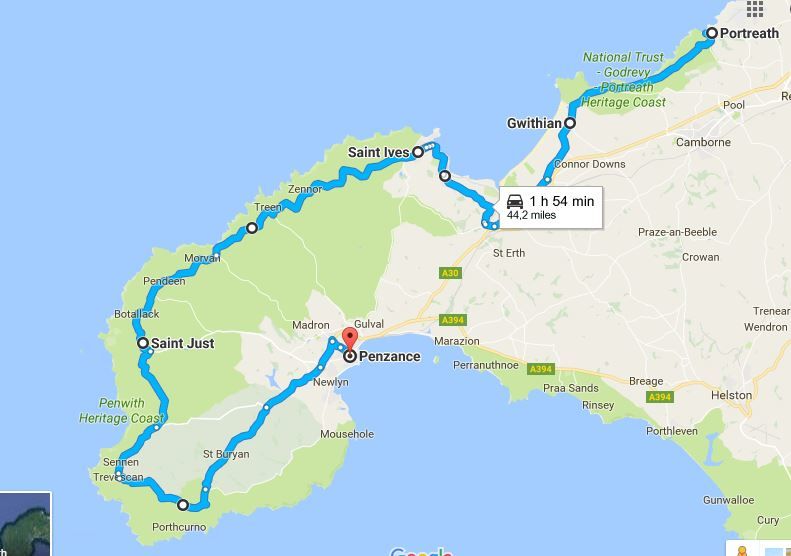 The first destination was Gwithian, a big beach with some imposing hills looking over. 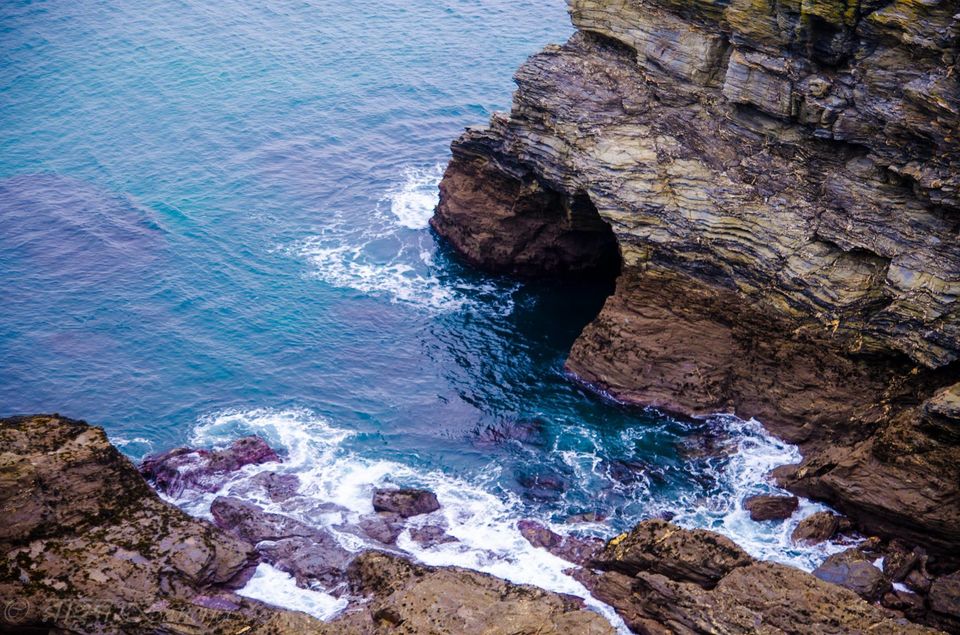 Next on the coastline was St. Ives, the most commercial beach on the south-west coast. But thankfully Cornwall beaches are nothing like the ones in the south-east which are too commercialised for my taste. The most quaint beach village that I have been to here is again a lesser known fishing village in Devon. The village had an interesting name - Beer ! But that is again another story which deserves another post.

The Rum and Crab shack visible in the photo is where we had a jumbo lobster, freshly caught from the sea and a Cornish Ale.

But, the highlight of the trip was now to begin. The most beautiful stretch of road in UK perhaps (given the many road trips I have been on here) is the road that stretches for about 13 miles between St Ives and St Just.

Beautiful green meadows, scenic little farmhouses lay between us and the ocean as we drove along the hilly road. It is best experienced as with every other drive. So its best to leave you with pictures that didn't do much justice to what I saw and felt that evening.

Cornish pasty is a famous dish here and the traditional Beef stake pasty is the most known of them all pasties. A must try when you are here. You could also run your tongue over the Cornish Ice Cream.

By the time I reached St Just, it was dusk. Its late autumn and I could not blame the sun. But the English weather forced me to cut short my trip.

I ended at Penzance though where the sun had already set and there was no point in following the coast anymore but retrace my footsteps back to the city.

Cornwall is famed for its beauty and there's a term called 'Cornish Beauty'. And you know what that means as soon as you set foot in this beautiful land of hills and seas.

But it was time-up for me. For now ! But I will again have to return to this beautiful land of rocks and blues. 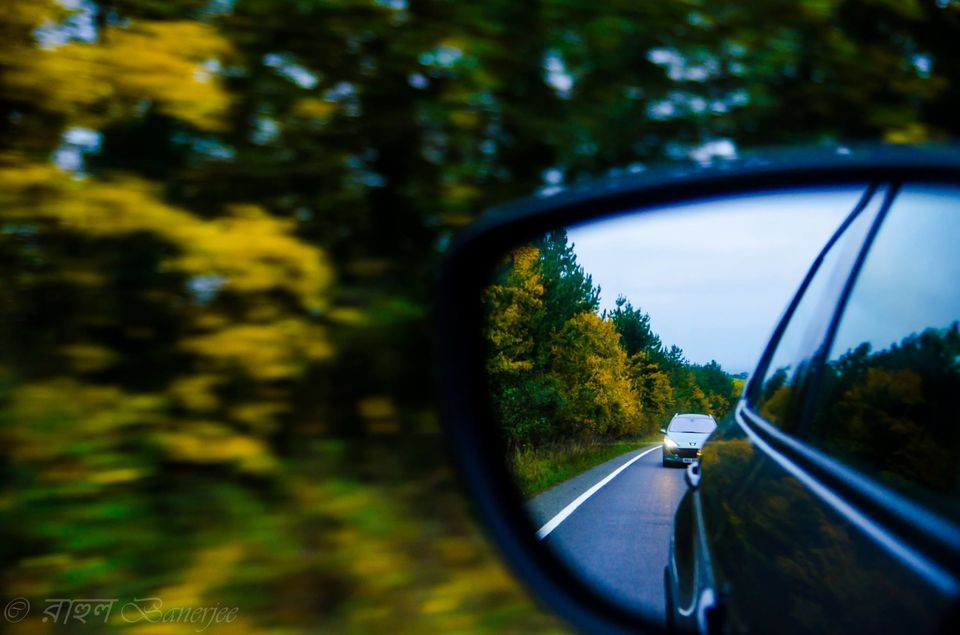 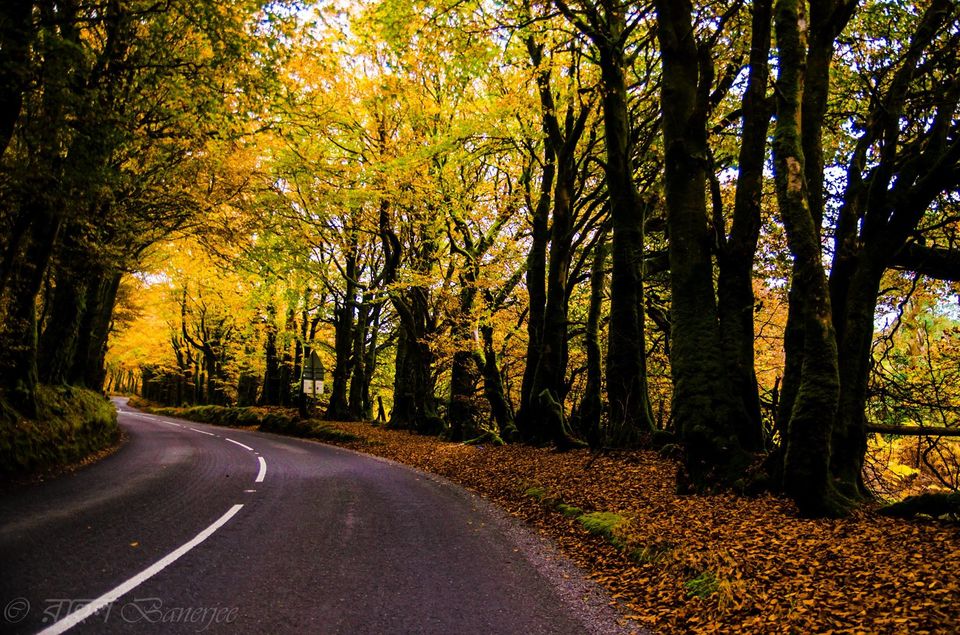 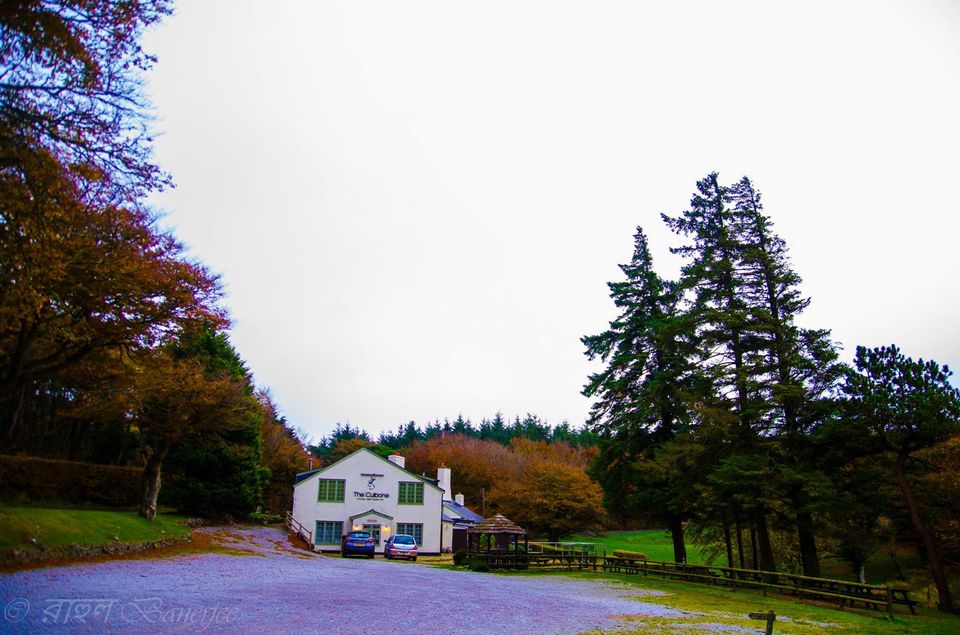 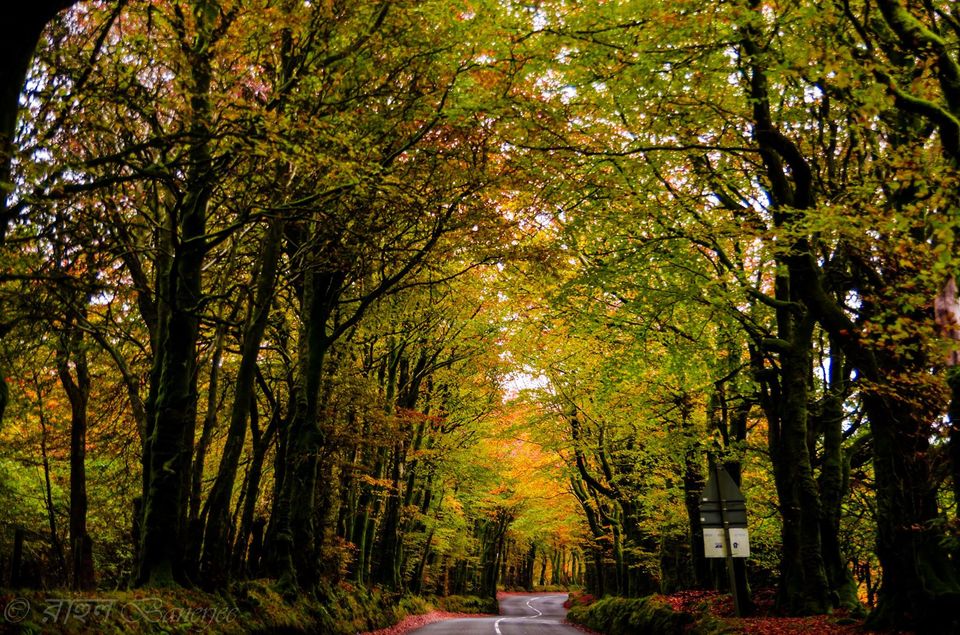