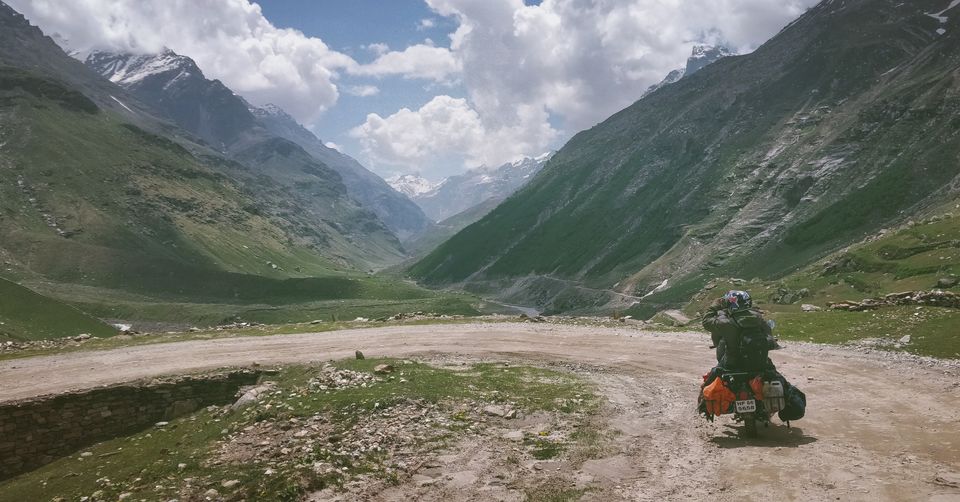 Bike trip in spiti valley is one of those trips where one should be ready for anything . In our group there was Me , Ankit and Rohan ( friends since 10th grade ) and ankit's college friend Devraj and rohan's friend Saket .

So , naturally a whatsapp group was created.

Everyone discussed what to bring on the trip ; 25000 in cash was mentioned on the top . Everyone was smart enough to bring just 1 rucksack but Rohan brought an extra bag to put his camera and other stuff .

On Saturday everyone reached Delhi , We took an 8 p.m. HRTC Himsuta for manali . Then saket got a call from manali that there has been a cloud burst in spiti . On sunday , morning we reached manali ( there was huge traffic between kullu and manali ) .

So , no one except me brought the 25000 cash they were supposed to bring and spent an hour near mall road on a sunday evening to find out that ATMs had no cash .

We had already booked our bikes and asked the guy to arrange permits as well . Since , saket already knew the guy Avinash ( HIMALAYAN HAWK ADVENTURES ) we expected that the bikes will be good and rates will be justfied .

Permit : 300 per bike ( negotiable or could be done online once you have details of bike )

We paid avinash through NEFT and decided to use my cash for the food and stay during the trip .

We were informed that path before gramphu had too many water crossings and path between gramphu and battal was also not so good to travel . Avinash suggested that we should go to leh instead .

We decided that we will go to Spiti and if anything will look too scary on the path , we will quietly come back .

He provided us with all the papers and permits , tool kit , extra spark plugs and tubes , extra clutch wire was already attached on bike .

Avinash told us to maintain the bike in motion while crossing water coz if the bike stops beween stones inside water its harder to push it out of it .

Initially rohan booked a KTM , but avinash strongly advised him not to take it on roads of spiti . So rohan rode pillion with me .

Ankit and devraj rode on one bike .

We bought bungee cords to tie luggage . Saket , dev and me bought rubber boots as we were driving .

We took the bikes to solan to check if the bikes were running okay .

THURSDAY : kaza to battal ( direct route ) ( at a very fast speed and no breaks it took us less than 4 hours )

FRIDAY : Battal to Manali ( 6 hours if road is open and crossings are okayish )

WHAT TO DO and WHAT NOT TO DO :

Leave early from manali to reach gulaba check post by 6 . We left at 7 a.m. and found huge traffic for around 10 - 15 kms before Gulaba .

On sunday night , try to sleep at places which are higher than manali ( eg. solan ) to acclimate . Our headaches started after Battal and continued till key Monastery due to height .

We ate diamox on sunday night itself ( its upto you )

In the morning when riding towards Rohtang , all the traffic is directed towards rohtang so bikers usually take the other lane which is kept free for vehicles coming down . Drive carefully.

In royal enfield , when you fill the petrol tanks fully , do not put it on side stand as the petrol starts gushing out of the cap .

When you are wearing rubber boots , you cannnot move your leg from the ankle to put gears or apply brakes or to put your toes over stones during water crossings , so , keep that in mind and get used to it . [ In other words its not a proper thing to wear but it saves you from icy cold water at crossings ]

In a group , 1 bike at a time so that others could help him .

One has to know where are the stones exactly inside the water , to avoid getting trapped in the gap between two big stones or where the the depth is too much . For this purpose the other person can walk ahead and guide where to take the bike .

Most importantly the earlier you are , the lesser the water will be , so try to cover this section in the morning hours .

We were taking extra caution because we knew nothing about repairing a bike ; if anything would have happened to the bike , the cost of sending the bike back to manali would be anything between 5000 and 10,000 plus the damages payable .

Reach Battal early and get a place at PWD Dormitory to sleep ( 250 per person ) . On our way back , we reached battal at 6:45 in the evening and we had sleep at a very dusty mattress inside a hut .

Even in kaza , find a stay first. keep your bags and then leave for langza - koumik - hikkim . [ there is direct route for kaza from hikkim so no need go back to kaza ]

While returning , from Kaza , our bike stopped and did not start . Rohan and i had to push the bike to the service center in kaza ; it was exhausting . The Service center is just near the entrance of kaza , the mechanic took only 150 for repair work of more than an hour .

So basically when the bike does not start even after using choke :

1. check fuel flow by taking off the pipe

2. take out the oil filter in open

when my bike stopped again after battal , i followed the same and found out that quality of petrol found in kaza was really bad , but then again anyone else's bike did not stop like mine did .

You will realise that most of the time you are driving in the first gear ( uphill and at water crossing ) , its okay to do that , but just don't keep pressing the clutch half way .

The uphill U turns are harder due to the stones / dust / mud , the first gear and a bigger turning radius are the key , just make sure there is no vehicle at the junction coming from opposite side . As applying brakes at this point will create imbalance for sure .

having someone riding as pillion is a good thing for the person driving . ( guidance / Entertainment ) .

But the pillion rider will have serious pain in the back and below throughout the ride .

All the luggage should be tied to the bike properly . In no case the riders should carry anything on shoulder or back , while riding ; not even a camera ( to avoid discomfort and loss ).

There are huge biker groups you will find on the way , they are all prepared , they have mechanics too. Staying ahead of them , might prove helpful if you are in a trouble . People are usually helpful when they are in spiti .

Things are sold for more than MRP till Kaza .

Chacha - Chachi Dhaba in Battal is awesome for so many reasons . When you sit there for a tea or meal , it feels like a trip for real . When we were there it was windy AF , we thought the plastic roof might blow off .

Key monastery is calmest of them all . The Dormitory is at top of the hill shaped infrastructure . I have never seen the night sky so starry , the balcony is just perfect to capture the Milky way. The food at the monastery and the Norwang restaurant is " simple " .

Most importantly , when you are riding down from rohtang pass , don't miss " that turn " towards spiti or you will be riding towards leh .

After your trip is done , you can go to Rocky's cafe located at old manali's end ( beyond manu temple ) . The food is good and the view is great on a cloudy day or mornings / evenings .

Lastly if you are on a trip and carrying your SLR , after every session take out the memory card and keep it n your wallet , just in case if you loose the camera , you will always have the pictures safe .

I hope this article proves helpful to travellers like us who want to do things on their own and in a budget .