10 best wanderlust movies of all time

Catching a travel bug is a serious incurable disease. You will find yourself in front of google or travel sites searching for the next place to visit, booking your next ticket or just simply reading experiences from different people all around the world.

Sometimes, you need some kick-start before you head out to your next adventure making sure that the spark is still there and won't be lost.

Travel films or documentary doesn't fail to inspire me over and over again, it helps me focus more on what I want, where to go and what to do in life. It gives me hope that there is still some parts of the world that is waiting for me to discover and another adventure awaits across the globe. Travel movies takes you on a trip and makes you more excited to just pack your bags, book a flight and JUST GO.

Here are my top 10 Travel movies that will surely ignite the wanderlust in you! A lonely, aging movie star named Bob Harris (Bill Murray) and a conflicted newlywed, Charlotte (Scarlett Johansson), meet in Tokyo. Bob is there to film a Japanese whiskey commercial; Charlotte is accompanying her celebrity-photographer husband. Strangers in a foreign land, the two find escape, distraction and understanding amidst the bright Tokyo lights after a chance meeting in the quiet lull of the hotel bar. They form a bond that is as unlikely as it is heartfelt and meaningful.

Billionaire Edward Cole (Jack Nicholson) and car mechanic Carter Chambers (Morgan Freeman) are complete strangers, until fate lands them in the same hospital room. The men find they have two things in common: a need to come to terms with who they are and what they have done with their lives, and a desire to complete a list of things they want to see and do before they die. Against their doctor's advice, the men leave the hospital and set out on the adventure of a lifetime.

The desire to find something real - to connect with something or someone - is what drives Richard (Leonardo DiCaprio), a young American backpacker who arrives in Thailand with adventure on his mind. Etienne (Guillaume Canet) and Francoise (Virginie Ledoyen) join him on an adventure to "The Beach," a mystical paradise. However, this paradise is less than perfect.

Liz Gilbert (Julia Roberts) thought she had everything she wanted in life: a home, a husband and a successful career. Now newly divorced and facing a turning point, she finds that she is confused about what is important to her. Daring to step out of her comfort zone, Liz embarks on a quest of self-discovery that takes her to Italy, India and Bali.

Christopher McCandless (Emile Hirsch), son of wealthy parents (Marcia Gay Harden, William Hurt), graduates from Emory University as a top student and athlete. However, instead of embarking on a prestigious and profitable career, he chooses to give his savings to charity, rid himself of his possessions, and set out on a journey to the Alaskan wilderness.

A father heads overseas to recover the body of his estranged son who died while traveling the "El camino de Santiago," and decides to take the pilgrimage himself. An idea from a young, new co-worker (Anna Kendrick) would put an end to the constant travel of corporate downsizer Ryan Bingham (George Clooney), so he takes her on a tour to demonstrate the importance of face-to-face meetings with those they must fire. While mentoring his colleague, he arranges hookups with another frequent-flier (Vera Farmiga), and his developing feelings for the woman prompt him to see others in a new light.

Carl Fredricksen (Ed Asner), a 78-year-old balloon salesman, is about to fulfill a lifelong dream. Tying thousands of balloons to his house, he flies away to the South American wilderness. But curmudgeonly Carl's worst nightmare comes true when he discovers a little boy named Russell is a stowaway aboard the balloon-powered house.

Walter Mitty (Ben Stiller), an employee at Life magazine, spends day after monotonous day developing photos for the publication. To escape the tedium, Walter inhabits a world of exciting daydreams in which he is the undeniable hero. Walter fancies a fellow employee named Cheryl (Kristen Wiig) and would love to date her, but he feels unworthy. However, he gets a chance to have a real adventure when Life's new owners send him on a mission to obtain the perfect photo for the final print issue. 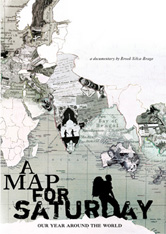 On a trip around the world, every day feels like Saturday. A MAP FOR SATURDAY reveals a world of long-term, solo travel through the stories of trekkers on four continents. The documentary finds backpackers helping neglected Thai tsunami victims. It explains why Nepal's guesthouses are empty and Brazil's stoplights are ignored. But at its core, SATURDAY tracks the emotional arc of extreme long-term travelers; teenagers and senior citizens who wondered, "What would it be like to travel the world?" Then did it.

Have you watched any of these already? What are your favorite travel movies?