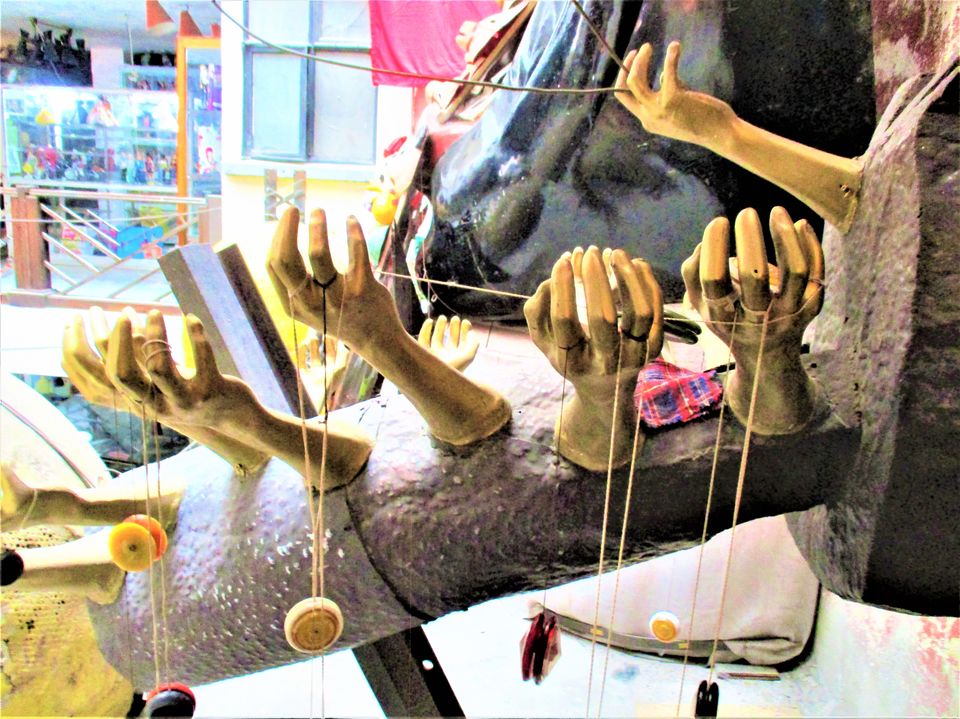 Mexico is a fascinating country to visit. The country is home to some unusual and bizarre traditions. Its most famous festival is Dia de los Muertos (Day of the Dead). The annual event honours and celebrates deceased ancestors. It's a strange combination of fun and melancholic and an example of Mexico's obsession and acceptance of death. In fact, nowhere else in the world is the subject of death celebrated with such exuberance.

Considering that Dia de los Muertos is Mexico's most popular festival, it's no surprise that there are some bizarre places to visit. Here are eight of them:

Revellers eat, drink and listen to mariachi music on boats which traverse the canals of Xochimico. Little do they know that the spookiest island in the world is located nearby. A place where creepy dolls hang eerily from the trees in various states of decay, not to mention the pervading atmosphere which fills the air. According to local legend, the dolls are possessed by the spirit of a girl who drowned under mysterious circumstances.

The caretaker of the island discovered a doll belonging to the girl. He hung it in a tree in her honour. He believed that the doll was possessed. Consequently, he continued to collect dolls. He hung them in trees all over the island in an attempt to appease the spirit of the girl. A visit to the island is a chilling experience. Now a tourist attraction, visitors arrive with their own dolls to add to the grisly collection.

A trip to Mexico's premier witchcraft market is a shopping experience with a difference. If you have an ailment, you are sure to find a cure for it here. This unique market blends Catholicism with ancient indigenous beliefs. Before visiting a regular doctor, many Mexico City residents seek a remedy here first.

Although pots, pans and other mundane items are sold, the outskirts of the market are deceiving. Indeed, if you delve into the depths, you find yourself in a voodoo-land of shrunken heads and amulets. If you aren't sure what you are looking for, don't worry. There are wizards, witches and shamans on hand to offer advice.

Located in the colourful city of Guanajuato, this macabre museum isn't for the faint-hearted. From 1865 to 1958, relatives of the deceased were required to pay a grave tax. If they couldn't pay, the body of the departed was dug up. To the surprise of the authorities, the bodies had become mummified, apparently due to the arid climate.

In time, the authorities accumulated enough mummies to open a museum. Many of the exhibits appear to have died in agonizing pain. There are several babies on display, not to mention a woman who had the misfortune to be buried alive. In all honesty, it isn't for everyone. Nevertheless, the morbidly curious will be fascinated.

This little known psychedelic oasis in the desert of Guanajuato, is an astonishing hippy dwelling. The house is known locally as La Casa de Color and was created by Anado McLaughlin. Indeed, every surface of the house, studio and garden is a work of art. Recycled bottles, seashells and broken pottery are used to create remarkable mosaics. What is more, the attention to detail is astounding. Paintings and sculptures are everywhere and there is a surprise around every corner. Above all, it's an organic, evolving of work of art. The house offers a glimpse of sixties counter-culture at its most exciting and vibrant.

Located in a slightly shady are of Mexico City, this is a bizarre museum which you have to see to believe. The incredible Museo del Juguete Antiguo was created by Yukio Shimizu, who started collecting toys many decades ago. As a result, he is now the owner of the largest collection in the world.

Set in a multi-storey warehouse, the museum is a crazy combination of odd, creepy and nostalgic. Indeed, everything from Barbie Dolls to Lucha Libre wrestlers are crammed into the nooks and crannies of the gigantic building. Additionally, on the rooftop there is a huge display of street art. Indeed, it's captivating, a little overwhelming and totally unique all at once.

If you dare to venture into Tepito, the most dangerous neighbourhood in Mexico City, you will encounter the altar of Santa Muerte. Otherwise known as the saint of death, the cult is the fastest growing belief system in the country. The cult is popular among drug cartels and linked with ritual murders. The saint of death is a controversial figure indeed.

In the first place, the family of Enriqueta Romero had the deity in their home for many years. Senora Romero then decided that the statue should be accessible to the public. With this in mind, she moved her onto the street. Attired in a dress and wig, the grinning skeleton receives offerings of everything from tequila to joints. Worshippers from all over the world gather to pay their respects.

Southern Mexico is pockmarked with sinkholes, otherwise known as cenotes. The sinkholes form part of a massive underground network of channels and caverns. The Mayans believed that they led to the afterlife and are thought to have been used for human sacrifice. If that doesn't put you off, Cenote Xkeken is an incredibly atmospheric place to take a dip. Like a natural cathedral, daylight streams through a hole in the limestone cave illuminating the azure water. Bats fly overhead, not to mention the catfish who nip at your ankles.

High in the mountains in a tropical rainforest, lies a surreal jungle wonderland. Situated near the village of Xilitla, Las Pozas is a weird and wonderful fantasy world. The project was the concept of the eccentric English artist, Edwards James. Indeed, a stroll through the jungle is akin to being in a psychedelic dream. Strange structures, giant flowers, concrete cactus, not to mention huge serpents, all make an appearance amongst the lush foliage.

Mysterious gateways open to paths leading to who knows where. Furthermore, a pagoda sits in front of a stunning waterfall, appearing like a film set for a Greek mythology movie. Magical and otherworldly, visitors can even take a swim in the pools, surrounded by columns and sculptures. Indeed, this remote Dali-esque style utopia is remote, but the journey is worth the effort.