A Glimpse into the lost kingdom of Champa: Po Nagar / Cham Temples of Nah Trang, Vietnam 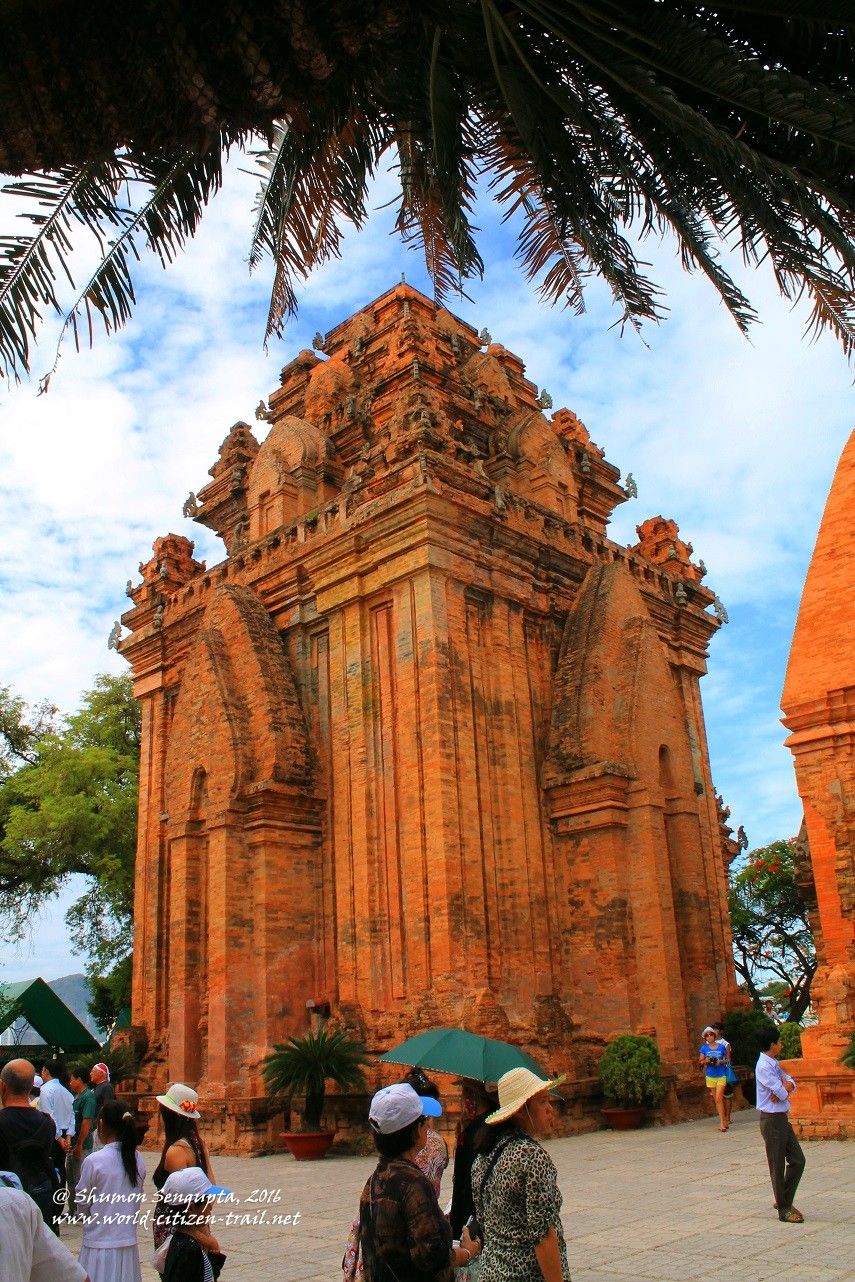 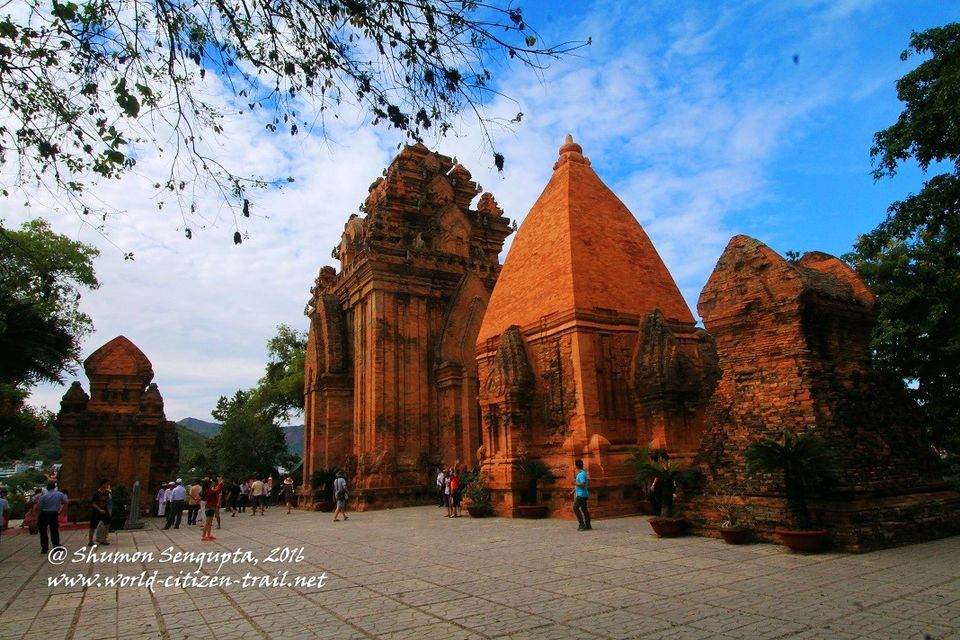 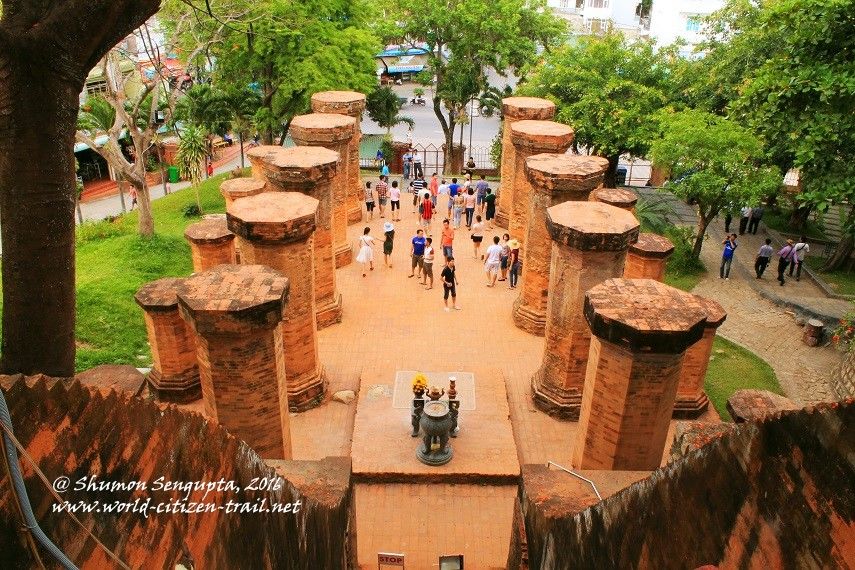 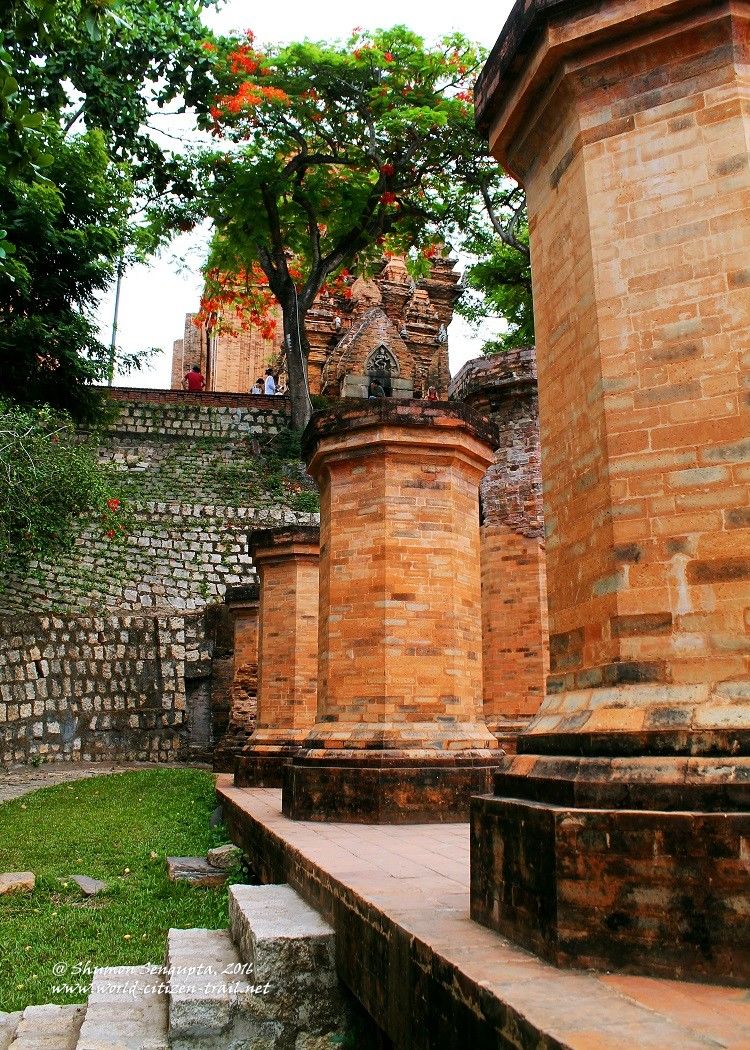 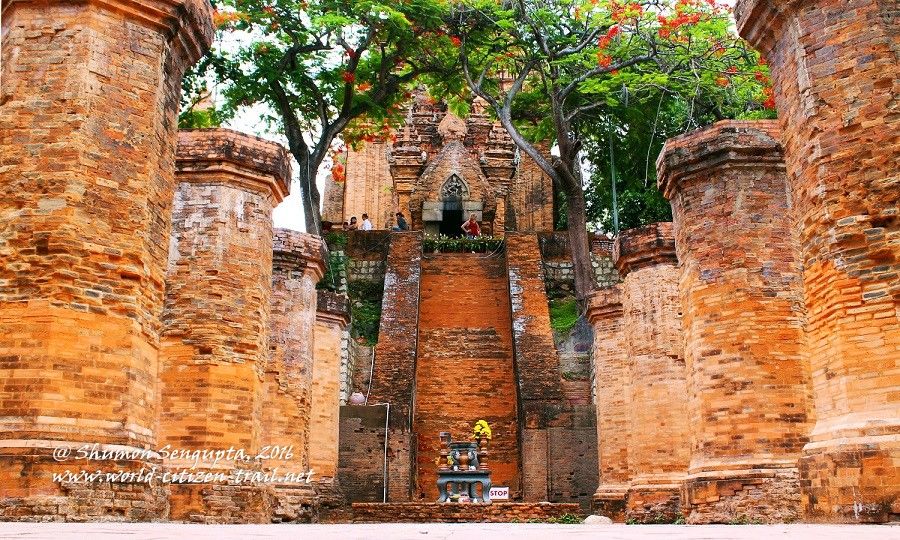 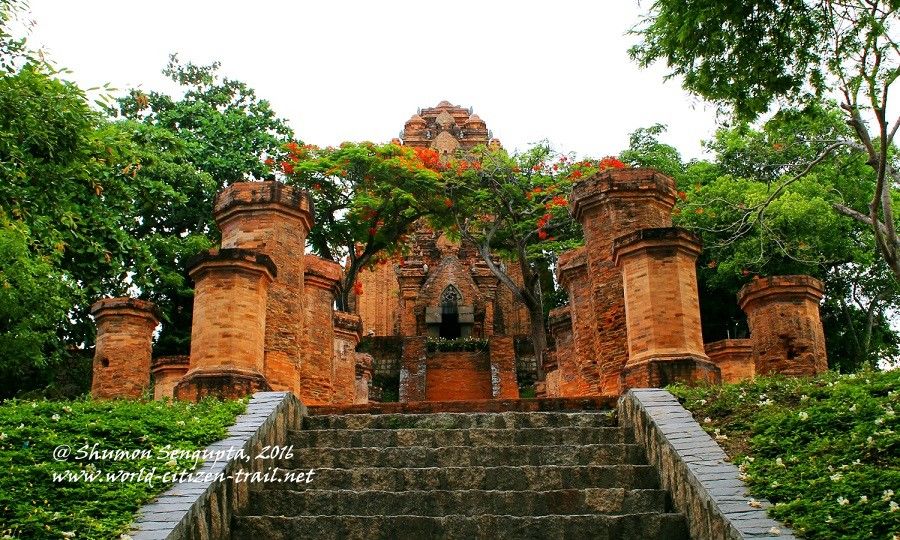 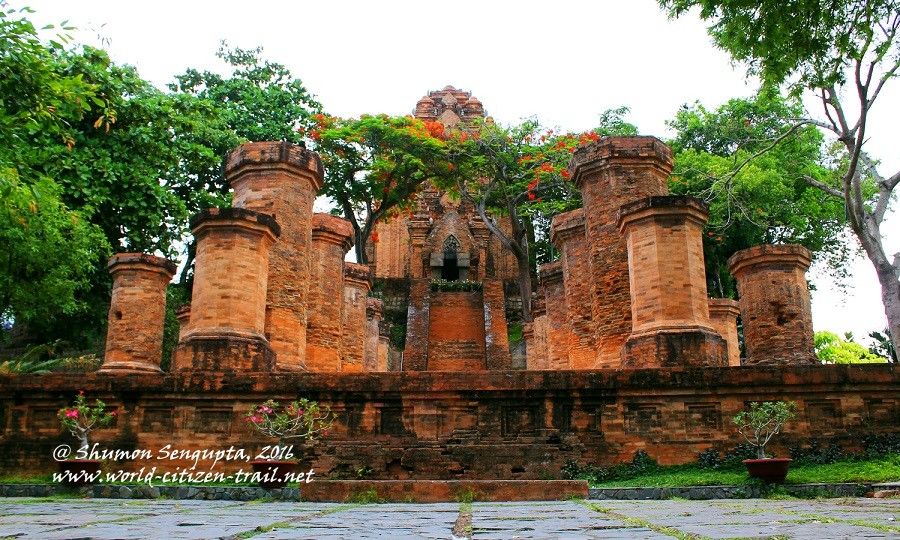 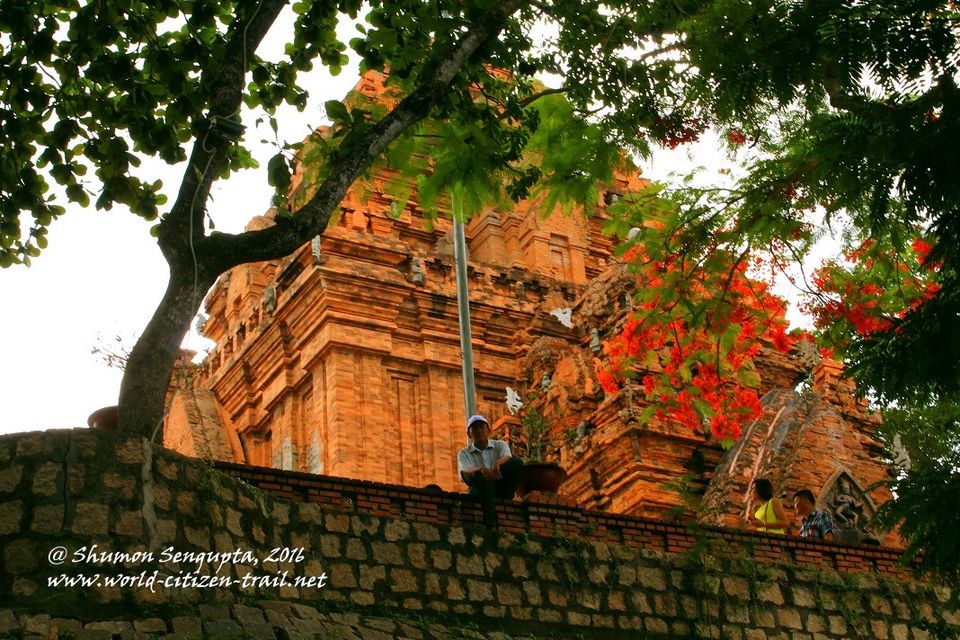 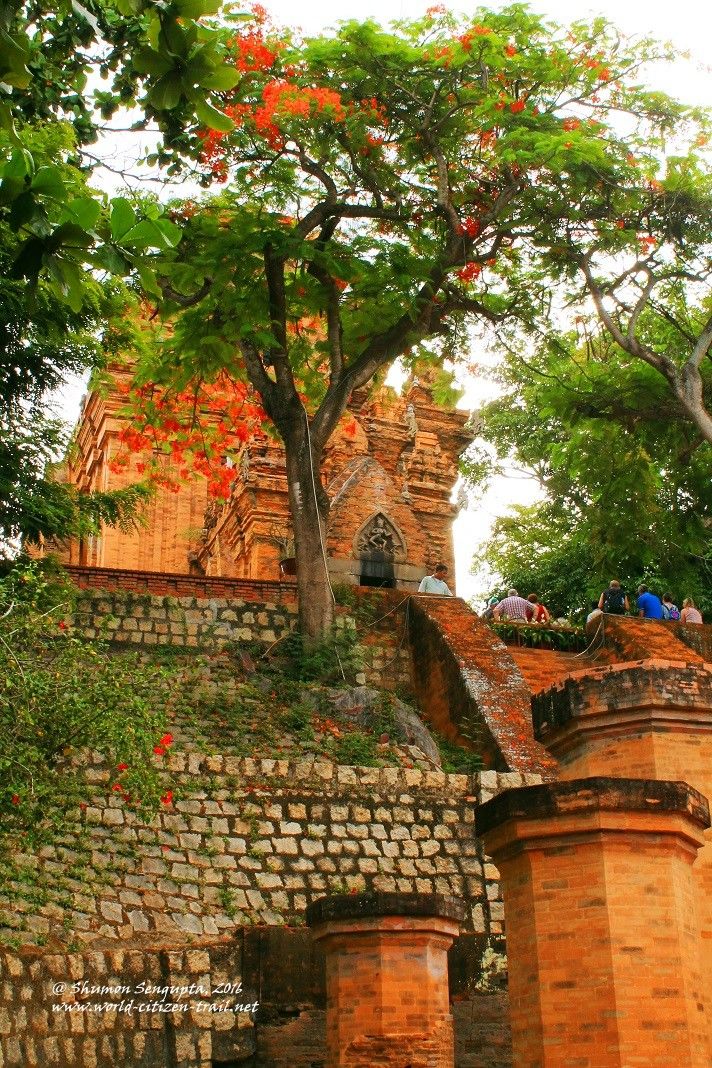 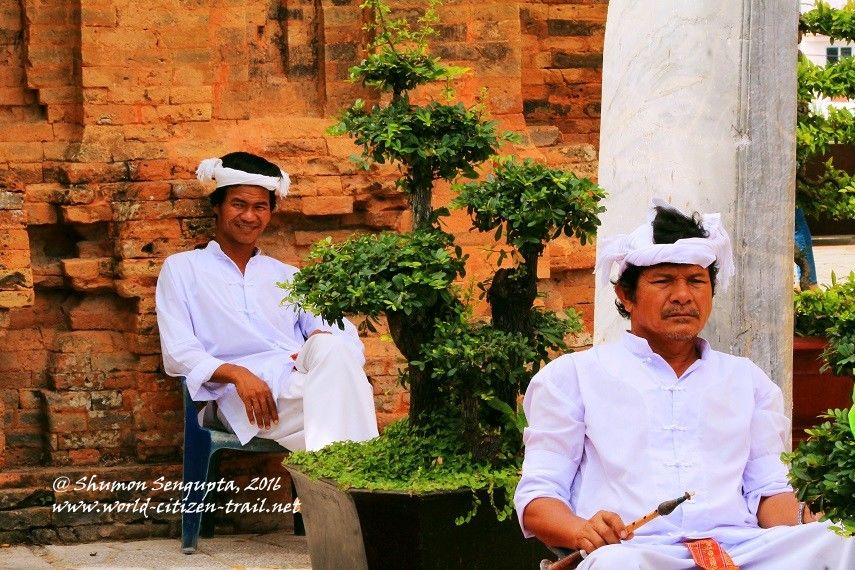 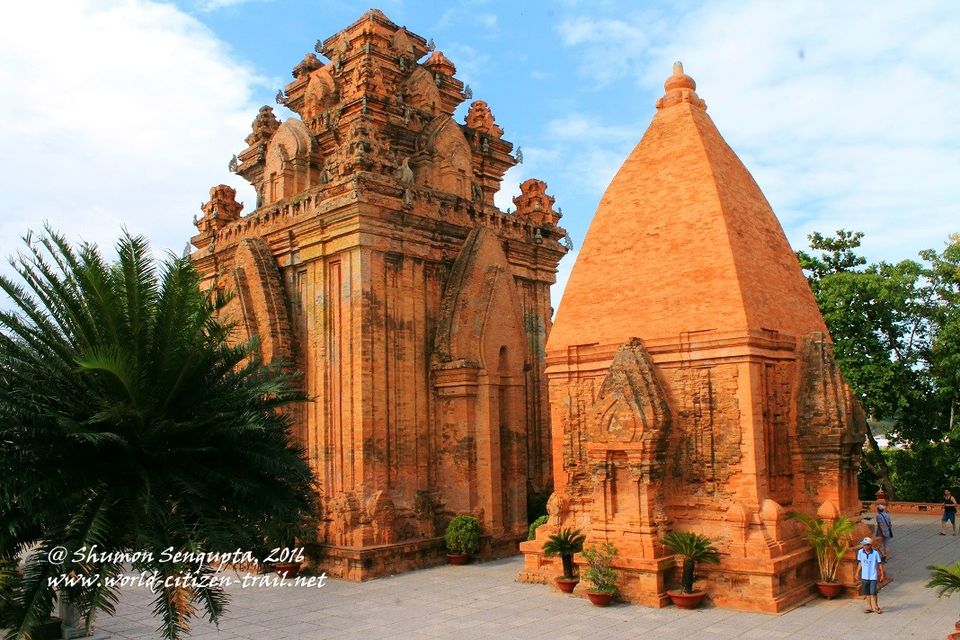 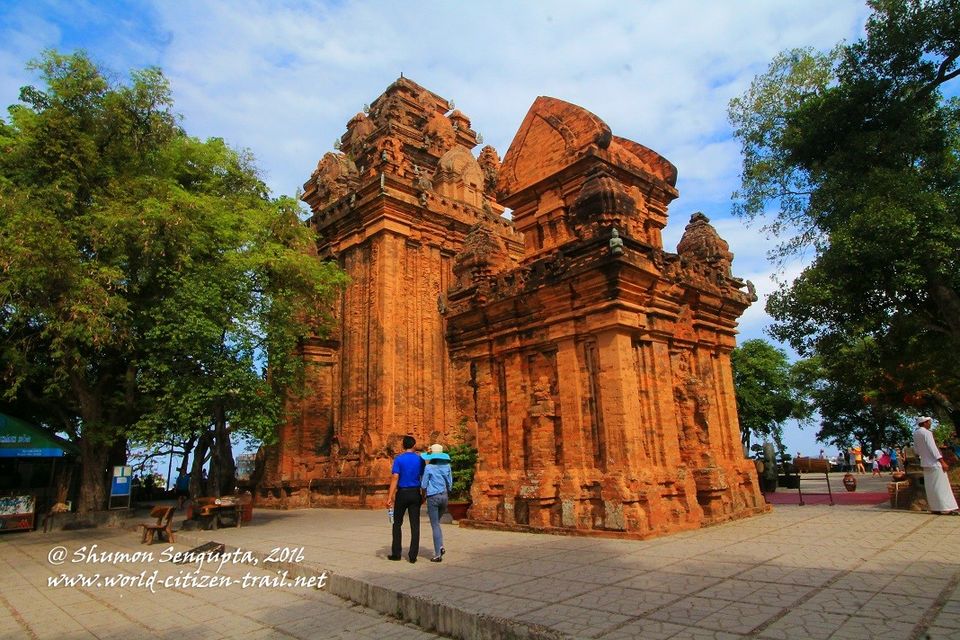 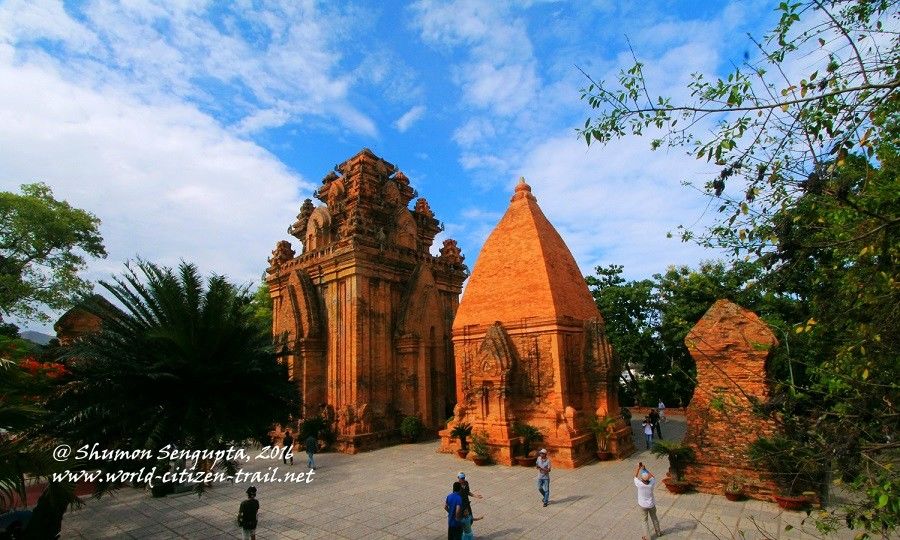 I was in the coastal town of Nah Trang in South-Central Vietnam for a week, on work. While chatting with a colleague over dinner, our conversation eventually moved on to art and architecture in South East Asia and my colleague informed me that less than 3 KM from Nah Trang was an ancient Hindu temple complex which was worth visiting. I was told the temple was still in uses for worship.

I did not know that there were ancient Hindu temples in Vietnam, and I was totally ignorant of the presence of any indigenous Hindus in the country. Hence I was intrigued and decided the check the temple out the following afternoon.

But before I describe the temple complex, a few words about the Cham people (from the kingdom of Champa), those who built these temples, would be in order.

The Kingdom of Champa was one of the many “Indic” cultures (also referred to as the Indianized Kingdoms) that flourished in South East Asia between the 6th and 15th century. These Hindu and Buddhist kingdoms thrived outside the mainland of what is present day India, for over a thousand years. The Cham people of Vietnam practiced a form of ancient Hinduism that was centered on the Hindu God, Shiva and the Mother Goddess.

It is quite likely that the original Chams of Vietnam, who are ethnically different from people of northern Vietnam, were immigrants / colonists from the Indonesian islands. They were particularly skilled in trade and shipping. Their chef cities along the coasts of Vietnam served as key ports in the important trade routes linking Indonesian islands, China, India, Persia, Arabia and Europe. Between the 7th and 11th centuries, the Cham people controlled the important harbor town of Hoi Ann (described in another post), which was an important link on the ancient strategic spice, ceramic and sandalwood trade route. At its height, the Champa Kingdom occupied much of Vietnam and portions of Cambodia and Laos. The Cham were a long standing historical rival of the Northern Vietnamese, as well as the Kingdom of Angkor in Cambodia. In fact, in 1177 Angkor was sacked by the Chams.

 Subsequently, in the 12th century, the Cham people were defeated by the Khamer Empire. The Cham kingdom shrunk further with the Vietnamese people’s southern territorial expansion. Following the Cham-Vietnamese War in 1471, the Cham Kingdom was reduced to a small enclave near Nha Trang, with many Chams fleeing to Cambodia. Today, the Cham people have been reduced to a very small and marginalized ethnic minority group in Vietnam.

The temple complex of Nah Trang is situated over a hillock, by the Cai River. Within this complex, numerous stone slabs (stele) have been found inscribed with information that shed light into the history of the Cham people – particularly their spiritual life and social structure. In addition to these inscriptions on stone, the history of the Cham people has also been reconstructed from other written sources, particularly recorded Chinese history.

 Historical research indicate that a temple made of wood existed in this site as early as the second century. This original wooden structure was completely destroyed by Javanese raiders in the 8th century, following which the temple was rebuilt in stone and brick in the 9th century – a work of architecture considered to be the first of its kind in Vietnam. The temple was built by the Dua (Liu) clan of the Chum people which ruled over the southern part of the Cham kingdom.

The temple complex is built on two levels. At the lower level, there once existed a large meditation hall (only the pillars survive today) and at the second level, there were seven to eight east-facing temple towers (of which only four survive today), built on a ledge overlooking the meditation hall. A flight of steep masonry stairs lead from the meditation hall, up to the temple complex at the top. This access is now closed and one has to climb the second level through a flight of winding steps by the side of the complex.

 The temple complex was built between the 7th and 12th century and is still used for worship, not just by the Cham people, but also by Vietnamese and Chinese Buddhists. This temple is dedicated to Yang Po Nagar, the presiding deity of the Dua (Liu) clan, in addition the Hindu God, Shiva. Yang Po Nagar is the local name of the Hindu Goddess – Durga.

Of the four surviving temple towers, the one on the northern side (Thap Chinh) is the biggest one and dates back to 817 CE. It is approximately 28 meters tall; has a vaulted pyramidal masonry roof over the sanctum sanctorum and a vestibule in front, immediately leading from the entrance. The doorposts and walls of the vestibule that lead to the Sanctum Sanctorum have numerous etched inscriptions.

 On the pediment, just above the entrance of this Northern Tower has a bas-relief image of the four-armed mother goddess – ‘Durga’ (the slayer of the buffalo-demon) executed on sandstone. The Goddess is shown in movement, holding a discus, a lotus and a club; with one feet trampling a buffalo. Her fourth hand gestures blessings. This beautiful bas relief also depicts two musicians – one playing the cymbals and another the flute, near Durga’s feet. 

In 918 CE, King Indravarman – III is said to have installed a ‘mukha-linga’ (phallic symbol with a human face executed on it) made of gold, inside the Northern Tower. The Golden Linga was subsequently looted by Khmer raiders. After a series of alternate plunders of the temple by raiders followed by replacements and rebuilding by local kings, finally in 965 CE, King Jaya Indravarman – IV replaced the gold ‘Linga’ with a black-stone image of the seated, 10-armed ‘Uma or Durga’ (the consort of Shiva), which is the image that we find today.

This exquisitely carved stone image has been painted over (it looks like wood) and gaudily decked up so excessively that one can hardly see the original stone sculpture. I suppose this is a fairly modern day development. For someone interested in art and sculpture, it is a disappointment.

The Central Tower (Thap Nam) was built in the 12th century on a site that had an older temple dating back to the 7th century. It is partly built of recycled bricks, probably from the older structure. There is a stone ‘Linga’ inside the sanctum sanctorum and overall this temple tower is rather plain. The interiors were however once said to have been covered in silver. The Southern Tower (Mieu Dong Nam) again has a ‘linga’. The last of the four existing towers – the Northwest Tower (Thap Tay Bac) is richly embellished. It is said to have been originally dedicated to Ganesha, the Elephant God. 

In an attempt to showcase Cham culture to visitors, the temple complex hosts ‘traditional’ performances – mainly by dancers and drummers. The drumming was soft and pleasant, the rhythms and beats uncomplicated, and the dance – simple, delicate and graceful. Needless to say, it would have felt more authentic if the dancers were in their traditional ethnic dress and not in their modern Vietnamese national costume which looks more like a uniform less like an attire for a traditional dance. The male drummers however were in their traditional dress and by their appearance they stood out clearly as a different ethnic group to the Vietnamese. 

The classical artistic legacy of kingdom of Champa, the little that remains today, comprises primarily of sculptures in sandstone, both freestanding and bas relief and some metal statues and decorative items. The work was predominantly religious in nature, while some were purely decorative. The religious life of Chams, as assessed from its art and inscriptions, seem to have beautifully syncretized elements of Hinduism (essentially Shaivism), Buddhism and indigenous religious practices.

Because of centuries of war, vandalism, pilferage and neglect, what we see today of the classical Cham artistic legacy is but a skeleton of its original form. Written sources like the Chinese books of history and the Cham inscriptions inform us of a cycle of catastrophic events – primarily acts of war and plunder that inflicted sever damage loss to the Cham culture and its art.

Based on a study of Chinese documents, historian Ma Duanlin writes that in the second quarter of the 5th century, a Chinese general name Yuen Kan pillaged the capital of Champa Kindgom, looting “rare and precious objects“, including “tens of thousands of pounds of gold in ingots coming from statues which he had smelted.” Subsequently, at the beginning of the 7th century, a marauding Chinese general named Liu Fang made away with “eighteen massive tablets of gold” which commemorated the coronation of eighteen previous kings of Champa.

In the following centuries, frequent raids and invasions by Khemer and Vietnamese armies resulted in the final destruction of Champa as an independent political and more importantly – the near total extinction of a culture in itself.

I spent half a day at this site, admiring the temples, watching the performances, wandering around, gazing over the surrounding vistas from the top of the hillock, checking out the numerous shops selling local wares and finally sitting for a while in the shadows of the soaring temple tower, wondering about the past splendour and grandeur of the Cham culture, now long lost to the world...

This post was originally published on 'Tales from the trial of a World Citizen'.