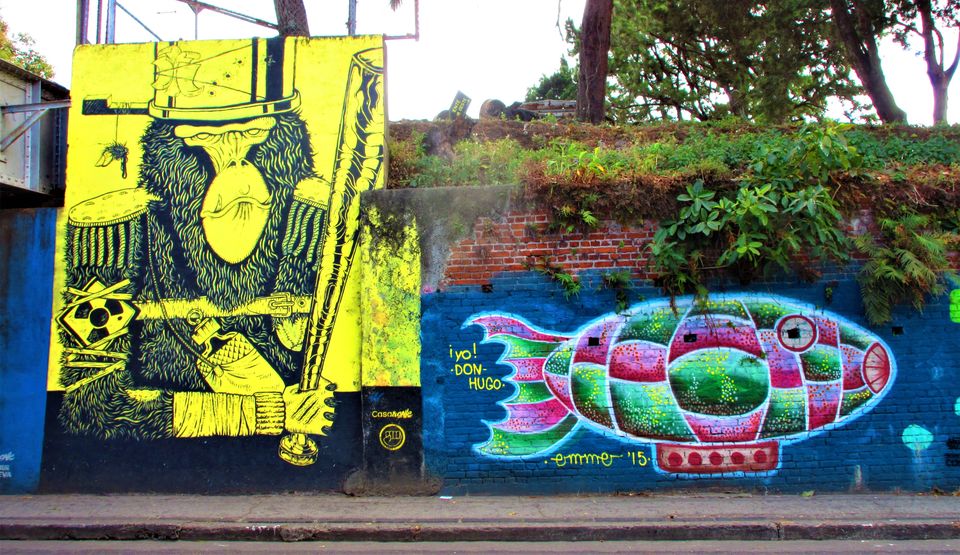 Welcome to a guide to surprising San Jose! Costa Rica is, of course, a paradise for nature lovers. Consequently, it makes sense that many people only wish to spend a minimal amount of time in the capital of San Jose before heading to the beaches and tropical rainforests. Additionally, it has to be said that San Jose doesn't have the best reputation and is known for crime and gang warfare. Nevertheless, during the day the city is relatively safe for tourists and the majority of visitors, as we did, enjoy hassle free visits to the city.

Situated in the central valley, San Jose is the capital and largest city in Costa Rica and is surrounded by volcanoes, coffee plantations and cloud forests. If you are travelling independently in Costa Rica, you will likely find yourself returning to the capital on at least one occasion in order to take onwards transportation. During our Costa Rican adventure, we found ourselves in the city three times in all - on arrival, departure and when catching a connecting bus.

The good news is that San Jose isn't such a bad place as you may have heard. Not only is San Jose home to some incredible street art and several interesting museums, but it has a beautiful national theatre. Admittedly, San Jose isn't one of the great cities of the world, but it certainly isn't without interest. Exploring its downtown streets and discovering the city's colourful street art definitely kept us happy on our visits there. Without further ado, here's a guide to surprising San Jose!

It is safe to explore central San Jose during the day. The most common crime is pickpocketing, so keep your valuables secure and out of sight and it will greatly reduce your chance of an incident. Avoid the following areas at night: 10 Avenue, The Coca Cola Market and Barrio La California. Additionally, stay clear of the parks, which are known to be dangerous outside of daylight hours. If you do venture out at night, make sure you take a taxi. It's always a good idea to check with your hotel or hostel if you are not sure which neighbourhoods are risky to walk around in.

To be honest, we found it difficult to find decent places to eat in San Jose. There was a little Middle Eastern café near our hotel which made excellent (and cheap!) falafel wraps and chicken shawarmas. Consequently, it became our go-to place. However, apart from that little joint, nowhere else we tried impressed us. There are, of course, some good restaurants in the city, but we just didn't find them!

Here are a few that we have heard about too late!

Restaurant Silvestre has an excellent reputation and serves traditional dishes with a twist in an elegant atmosphere.

We wish we had made it to El Buho Vegetariano, which by all accounts, is the best veggie/vegan restaurant in the city. Apparently, the food is not only seasonal and organic, but delicious and reasonably priced.

One of the top-rated hostels in the city is C apital Hostel de Ciudad where dorms and private rooms are available. In the dorms, each guest has their own pod, complete with curtain, shelves, plug socket and light. There is a BBQ/yoga area in the backyard as well as a lounge and working space.

We stayed at Hotel Santo Tomas, which is a boutique hotel within walking distance to all the main attractions. It's a mid-range option with breakfast included in the price and was comfortable and friendly. It even has a small swimming pool and some outside areas to relax in. It was also very secure.

If you are looking for a touch of luxury, you can't beat the Marriott, which is a twenty-minute drive from downtown. It is built on a 30-acre former coffee plantation with views of the mountains and city skyline. It offers everything that you would expect from a luxury hotel including two restaurants, a bar, a swimming pool and fitness room.

How to get to Downtown San Jose from the Airport

We took a bus to and from the airport - it was cheap and only took about 35 minutes. On arrival, we took a taxi to our hotel. Although it was nearby, it was getting dark and we couldn't get our bearings, so we decided to play it safe.

Leaving San Jose for other Destinations in Costa Rica

We found the bus network good in Costa Rica. However, we did find ourselves having to change buses in San Jose in order to cross from the Pacific coast to the Caribbean coast. Confusingly, there is no main bus terminal in San Jose, but terminals are scattered through the capital. The buses from each of them head to different destinations through the country and also to other major Central American cities.

What to do and see in San Jose

At the heart of the city lies Plaza de Cultura. Apart from the splendour of the National Theatre, the architecture on the plaza isn't particularly interesting. Nevertheless, it's a space where vendors congregate, street performers entertain the crowds and families stroll along eating ice cream. At weekends it come alive with concerts, performances and is also occasionally the scene of political demonstrations. The surrounding streets are lined with shops that include everything from international brands to tacky souvenir stores.

With an exterior in neo-classical style, this impressive theatre was built between 1891 and 1897 and was inspired by the Palais Garnier in Paris. The ornate lobby is home to statues by Pietro Bulgarelli and it's possible to pop inside and catch a glimpse of it. The theatre's most spectacular feature is a mural on the ceiling by Aleardo Villa, which depicts rural life in Costa Rica at the turn of the 20 th century. The National Symphony Orchestra perform regularly in addition to a full programme of ballet, plays, operas and concerts. Guided tours are available during the day.

Depending on your interests, there are a few museums in San Jose worthy of a visit. Here's our pick of four of the best:

Located in a subterranean building on Plaza de Cultura, this museum is home to over 3,000 gold, ceramic and stone Pre-Columbian artefacts. Spread out over several floors, the museum examines the role of gold during Pre-Columbian times. Signage is in both Spanish and English.

You can't miss the striking sight of this museum, which is constructed to resemble a block of raw jade stone. Over 7,000 pieces of jade together with Pre-Columbian art and pottery are on display on five floors. The lay out is well-presented and information is in both Spanish and English.

The Museum of Contemporary Art and Design

If you have an appreciation for modern art, this is the only place to head to in San Jose. Exhibits are ever-changing and include experimental, audio and visual presentations. The museum is small, but entrance fee is only a couple of dollars.

Housed in a former fort (which still has bullet holes visible on the building), The National Museum traces the natural history together with the anthropology, archaeology and history of Costa Rica. The star of the show is the Butterfly Garden at the entrance of the museum where you can see an array of the country's most spectacular butterflies.(N.B. The butterflies don't get any more dazzling than those in Costa Rica!)

This bustling market on Central Avenue consists of a maze of lanes and alleyways where vendors sell everything from electronic items to Costa Rican coffee. Additionally, it's a great place to pick up a souvenir or two and the prices are generally lower than shops. There are tiny eateries where you can sit and sample freshly cooked local cuisine. A market is always an ideal way to gain a glimpse of local life and this one is no exception.

One of the highlights of our time in San Jose was discovering the city's street art. Vibrant urban art can be seen all over the city, but one of the best places to find it is Avenida 3 between Calles 15/17. The colourful and innovative street art in this area is abundant and captivating.