Amritsar - Home to Sikhism's Holiest Shrine - To travel is to live!

By BULBUL on the wing 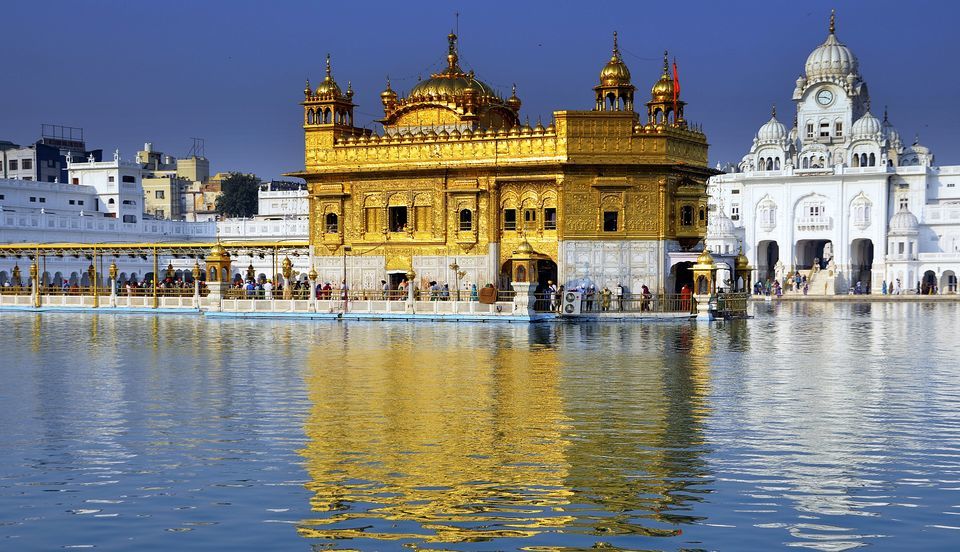 Amritsar is a city in the northwestern Indian state of Punjab. Guru Ram Das, the fourth Sikh guru is believed to have found the holy city of Amritsar. The pious city shares its border with Lahore, Pakistan.

The best time to visit Amritsar is between November and March. The weather is pleasant and ideal to visit tourist attractions.

How to reach Amritsar

You can reach the city by Air, Rail or Road, depending on the time you have.

Rail - Amritsar railway station is the main terminus station. It is well connected with other parts of India.

Road - If you are traveling from nearby states to the holy city, the best mode to reach is by Road. The simple reason is that it allows you to explore many things on the way. Do visit 'Haveli', a restaurant on the Amritsar - Jalandhar Highway for some delicious food and entertainment on-the-go.

Riding a taxi is without a doubt the best way to reach the city center. The trip will take around 20-30 minutes. Estimated prepaid taxi fare to get to the city center would be INR 350-400. You can also try Uber/Ola to get more competitive prices.

If you are visiting Amritsar for religious reasons and carrying small baggage, enquire if you can take a free shuttle bus to Golden Temple from the Airport.

One tip here - Avoid riding any other taxis, since they can scam you. There have been incidents of overcharging tourists. If at all, you have to ride one, ask the driver to turn on the meter.

Many 3-star hotels are located in the radius of 1-3 km from the Golden Temple. The hotel tariffs range from INR 1500- NR 2500 per night. There are many Dharmshaalas nearby Golden Temple ranging from INR 500 to INR 1200 per night.

The cost-effective and convenient way is to use Rickshaw or Autos for local commute. The average auto fare from the station to the golden temple would be INR 100-120.

The safest is to buy local currency from any bank. There are many reputed forex dealers as well. But, a bank is the easiest to locate anywhere.

I should actually put this under 'Things to do in Amritsar'. No trip to Amritsar is complete without eating a meal at 'Kesar Da Dhaba'. This vegetarian Punjabi Dhaba is more than 100 years old. It is located in a narrow lane, around 500 meters from the golden temple. The lane, especially in the evenings, is overloaded with people waiting for their number to flash on the small screen outside the dhaba. I am not joking. I waited for around an hour.

Try out the dal makhani, palak paneer, and Tawa Parantha. The food is dripping with desi ghee (unsalted butter) but tastes so good. The dessert, phirni (served in earthen pots) is a must for your taste buds to have an unforgettable climax ????

One tip here - The waiting time here is a minimum of 45-60 minutes. Plan your 'hunger' accordingly.

Things to do in Amritsar when you have only 1 day

Darbar Sahab is an illustrious pilgrimage site of Sikhism. It is usually called the Golden temple because it is plated with gold. The entire top of the temple is made of pure gold. As per Lonely Planet India, the temple is a blend of Hindu and Islamic architectural styles. The foundation stone of the temple was laid in 1589.

Words can explain the beauty of the temple, but not the sublime peacefulness that is felt there. You can spend hours inside the temple without ever getting bored. The more time you spend there, the more you would want to stay. The temple is surrounded by a manmade lake (Amrit Sarovar) that has a lot of red fishes in it.

The darshan (visit) time starts from 2:30 am till 11 pm. The crowd is much lesser than it is during the daytime. A lot of pilgrims sleep in the temple premises itself. I reached the temple at 11:30 pm, thanks to Kesar da dhaba waiting time :-), with a hope to take good photos. But, I ended up staying there till the next morning. If possible, stay there for the 'darshan' which starts at 2:30 am. It is exceptionally calm during the night. The chanting of 'Satnam Waheguru' before the doors are opened for darshan, is a pleasure to the ears. It leaves a therapeutic effect on both mind and body. After the darshan, while exiting, take the prasad. The Prasad, called Karrah, is a halwa made up of wheat flour, ghee (unsalted butter) and sugar.

Many pilgrims take bath in the sacred Amrit Sarovar. The water is believed to have healing powers. The pool is called the 'Pool of the Nectar of Immortality'.

One tip here - Cover your head all the time. It is a way to pay respect to God. You will get a good scold from the sevadaars (volunteers) if the head is uncovered at any time.

a) Carry a light jacket to cover yourself as it gets cold during the night.

b) You can meditate while sitting near the lake. It's tranquil in a way, that can only be experienced.

c) If you have a late night hunger attack, you can go straight to the langar hall. The langar is a 24 hours community kitchen, which serves free food to about 100000 people every day. There are volunteers who do seva i.e. help in cooking and serving the food. You also get tea and toast right outside the hall 24 hours a day. The meals are basic vegetarian food i.e. lentils, bread, rice, vegetables, etc.

d) Go and reserve your seat in front of the main door before 1:30 am. You will find people already sitting there. The Guru Granth Sahib, the holy scripture, is treated as a living person. The kirtan starts at around 2:30 am and the Guru Granth Sahib is placed in the Akal Takht (bed).

e) If time allows, meditate on the 3rd floor of the temple. Real peaceful energy.

f) If you are driving you're own car to the Golden temple during noontime, it is highly recommended to leave the car at the hotel. You won't easily find a parking space outside. Finding a parking space in the night is not a problem.

g) Lastly, take as many photos as you can of the beautifully lit temple. Without a question, it is the most beautiful Gurudwara (temple) in the whole world.

A place which makes any Indian feel Patriotic. The border divides Indian and Pakistan. It is about 30 km from Amritsar, India and 25 km from Lahore, Pakistan. One can reach here by bus or taxi. The buses start from the golden temple, costing approx INR 100 per person. The cab will charge around INR 1000-1200 from the golden temple to the border. It is better to ask your hotel to arrange for a taxi.

Wagah Border Ceremony, also known as Beating Retreat Ceremony was started in 1959. The ceremony takes place every day. The timings change depending on the season. The ceremony starts at around 5:15 pm and 4:15 pm during summers and winters respectively. The entry is free. Patriotic performance by way of an extremely energetic Parade is done by the Indian soldiers and Pakistan soldiers simultaneously. The parade is done along with loud shouts of 'Vande Mataram' and 'Hindustan Zindabad', which means - 'long live India'. The audience repeats the same at the top of their lungs. It feels as if there is a competition going on as to which country's audience is louder. The parade involves foot tromping (while lifting the legs very high) by the proud soldiers. It is an amusing display of one-upmanship. After the Parade, the national flag is lowered and taken off for the night and is then hoisted again the next morning. This is a daily ritual.

For an Indian, it is an uncanny feeling to watch Pakistanis right across the Border Gate.

A few tips for Wagah Border

a) Try to reach the stadium half an hour before the ceremony starts. Take the place on the top. You will be able to see 'Lahore, Pakistan'. The parade view is nice and can be seen on the big screen displayed. If you are more keen on watching the soldiers from near, then take your seats on the ground level at least an hour before the ceremony starts.

b) Do not carry anything except money and a bottle of water. There are stalls inside selling food and drinks.

c) Inform your family before entering the main gate as the mobile phone would most likely be not working due to the jammer.

d) Wearing a cap and shades is a must. Wear good sunscreen as well.

e) Wear comfortable footwear as a fair amount of walking and climbing the stairs are involved.

This public garden witnessed one of the most heinous crimes committed by the Britishers on April 13, 1919. The Britishers shot around 1000 people dead, who had gathered in the garden for a protest against the arrest of 2 Nationalist leaders. There were about 25000 people present there. Some tried to escape from the garden and some jumped in the well built in the premises.

The place has a great significance in Indian History. The walls of the garden still have the mark of the bullets. The well, in which people jumped is also well preserved.

The garden is near the Golden Temple and the entry is free. It is open on all days.

One tip - Avoid going in noon time (during summers). It is unbearably hot.

Also known as Lakshmi Narayan Temple, is another pre-eminent temple in the holy city. Idols of Goddess Lakshmi, Goddess Durga, and Lord Vishnu are worshipped here. The architecture of the temple is similar to the Golden Temple. This temple is also built in the middle of a lake. A bridge, built across the lake gives access to the pilgrims. There is a langar hall here as well.

The temple is open from 6 am till late in the night. But, visitors are not allowed inside the temple for about an hour in the noontime, somewhere between 11:30 am to 1 pm. Plan your visit accordingly

If you are interested in the History of India, this is a must go.

One tip here - If you do not have a lot of time, skip the pre-partition section and head towards the Boundary commission room.

Must try vegetarian food in Amritsar

b) Amritsari Kulcha (a kind of bread)

Best to shop in Amritsar

a) Punjabi Jutti, it is Punjab special footwear

c) Kara (Steel Bracelet), you will find these outside the Golden temple

SPONSORED
Want to book a similar trip?
I accept the Terms of Use and Privacy Policy of Tripoto.
SPONSORED
Related to this article
Things to Do in Temple,Temple Travel Guide,Weekend Getaways from Temple,Places to Visit in Temple,Places to Stay in Temple,
Tagged:
#temple#pilgrimage#video