Sylhet Division is the northeast division of Bangladesh. It borders the Indian states of Meghalaya, Assam and Tripura to the north, east and south respectively, and with the Bangladeshi divisions of Chittagong to the southwest and Dhaka and Mymensingh to the west.

Panthumai, a West Jaflong Union village under Guainghat Upazilla, is another resort in Sylhet. The village, which is very close to the eastern Khasia hill of the Meghalaya Ranges, boasts of a striking fall popularly known as Borhill Fall. Although the main fall is geographically located in Indian territory, people can enjoy its enormous splendor head-on. Flowing from Borhill Fall is a branch of the Piyain River that heads west and leads to Bisnakandi, another major tourist spot. Besides the splendid drop, the Guainghat-Pangthumai Highway itself is a sight for the sore eye. As one heads east, the huge mountain ranges seem to get closer and gradually change from blue to green. And the clouds and waterfalls playing hide and seek are sure to fill you with awe. The best time to visit Pangthumai is between April and mid-October. To visit Panthumai, you must go to Guainghat Upazilla Sadar. From the town of Sylhet you must take the Sylhet-Tamabil highway and travel about 42 km until you reach Sarighat, where you must turn left and travel about 16 km to reach Guainghat Point, where the road forks. The road on the right leads to Upazilla Sadar, while the one on the left leads to Sylhet airport. Just one kilometer of travel on the road on the left leads to Guainghat College. An additional 12 km journey through the narrow alley to the east next to the college leads to the village of Pagthumai. On the way to town there is a market popularly known as Bazar Maturtol. After reaching Pangthumai village, one should get out of the vehicle and walk left for a while, and one will be in for a big surprise. An impressive waterfall is ready to welcome you with its dazzling beauty.

Tourists can visit Lalakhal and Pangthumai on the same day if they wish, due to the proximity of these places. Starting early, you can travel to Lalakhal by car or bus and then take a boat to Zero Point, meander through Lalakhal Tea Garden, and finally have lunch at River Queen restaurant before departing for Pangthumai. The journey shouldn't take more than an hour and a half, leaving one with the entire afternoon to spend in the fall before embarking on a two-hour drive back to the city.

To visit Lalakhal and Pangthumai you can rent a minibus for 5500-7500 BDT depending on its size and brand, although it will cost a bit more on weekends.

Lovachora is a border area with Kanaighat Upazilla in the eastern part of the Sylhet district, which is somewhat fortified from northeast to northwest by the Meghalayan mountain ranges. It is essentially a quarry where stones and boulders are quarried, as well as an old tea garden. The visit to Lovachora involves a boat trip from Kanaighat Sodor. As the ship moves east it will soon reach the confluence of three rivers. Flowing from the south and north respectively, the Borak and the Lova meet at one point, take the name of Surma and flow west towards the city of Sylhet.

The shadows of the distant hills falling on the crystal clear streams of the Lova create a heavenly sight. The Lovachora Tea Garden stretches over a wide area from the riverside to the slopes of the hills. A tea factory devastated in the Liberation War in 1971 is still preserved in the garden. Along with an old cabin, it is a must-see for visitors. The hut at the top of the hill is popularly known as the Fergusson Bungalow, named after the Fergusson family who installed the tea garden.

What's more, subject to permission from the BGB border patrol force, tourists can go to the source of the Lova and see the suspension bridge that connects two hills on the other side of the border.

First you have to go to Kanaighat Upazilla Sadar to get to Lovachora. Different routes can be taken to go to Kanaighat from Sylhet. One option would be to use the Sylhet-Jaflong highway and turn right at Dorbosth Bazaar. The one-and-a-half hour drive itself is an attraction in its own right. To the left are the ranks of the Jaintia Hills. Upon reaching Kanaighat Upazilla Sadar, which is located on the shore of Surma, tourists can rent a boat to go to Lovachora.

The boat trip from Kanaighat to Lovachora takes an hour and a half.

Despite being an Upazilla, a small administrative unit, in Sylhet's Moulvibazar district, Sreemongol has long been credited as one of the top tourist attractions and has earned its recognition as a city since the early 19th century. Although the first tea garden in Sylhet, Malnichara, was established near the town of Sylhet in 1854, the large tea plantations eventually found their niche in the town of Sreemongol and the surrounding hills and mountains. The only tea research institute in Bangladesh, BTRI, which is a popular tourist destination, is also located in this city. Easily accessible from Dhaka by road or train, Sreemongol has a lot to offer tourists. Of the 138 tea gardens in Greater Sylhet, 38 are located in Sreemongol, and this number would not be less than 60 when added to the gardens in the surrounding areas.

Anyone traveling in and around Sreemongol is sure to be greeted by lush green tea gardens that stretch out over miles and miles of mountainous areas, not to mention the singing birds and shady trees in addition to the gardens of pineapples and lemon trees.

Just two kilometers from the city, the BTRI is easily accessible by rickshaw or CNG auto-rickshaw. With permission, one can enter the premises and be fascinated by the splendid flower gardens, ancient tea plants, a tea factory, a testing laboratory and many more.

Just outside BTRI is Neelkantha Tea Cabin, a fabulous tea stall and another Sreemongol attraction where tea gardener Ramesh Ram Gour sells tea in a variety of colors and flavors.

Around the city of Sreemongol there are several natural lakes. Just a ten-minute rickshaw ride down College Road leads to Varaura Lake, which is surrounded by lush green tea gardens. Lake Rajghat is a bit far from the city. In 30 minutes by car, you can take Kalighat Road or Sindurkhan Road from Sreemongol city. Also, about 10 kilometers east of the city of Sreemongol is the legendary Madhabpur Lake within the Patrakhola Tea Estate. The various colored water lilies in the lake, the pedestrian paths along the riverbank, as well as the tweeting of numerous birds in winter make it a place worth visiting.

Besides the tea gardens, hills, forests and lakes, Sreemongol has also been enriched with the beauty of beels and haors (that is, swamps). Covering an area of ​​600 square kilometers, Baikka Beel is located there. To the east of Hayeel Haor is Baikka Beel comprising 100 hectares of swamps. Following a government decision, this swamp has been preserved as a refuge for local fish since 2003.

In winter, this swamp is inhabited by both migratory and local birds. In addition to the singing of various species of birds, the beauty of different flowers, including water lilies, enchants tourists. An observation tower has been built there for the convenience of tourists.

Although most tourists visit Baikka Beel during winter, this swamp takes on incomparable beauty in the rainy season.

At the foot of the Meghalaya mountain ranges, in the middle of Tahirpur and Dharmapasha Upazilla, under the Sunamgonj district, in the northeast of Sylhet, is a vast swamp popularly known as Tangoar Haor that extends over an area of ​​almost 100 square kilometers. Cascading down from the Meghalaya, around 30 waterfalls flow into this great body of water engendering an enchantment that is truly rare. In 2000, it was internationally recognized as a Ramseur site. After Sundarbans, it is the second Ramseur site in Bangladesh. Before that, in 1999, the government of Bangladesh designated Tangoar Haor as an ecologically critical area.

Tangoar Haor is worth visiting in winter (December to February) when tourists would be greeted by thousands of species of local and migratory birds, as well as in the rainy season (June to August) when boisterous waves coupled with incessant rains and the meghalayan clouds create a scene that enchants each and everyone.

In winter, tourists can rent scooters at Shaheb-bari Kheyaghat in Sunamganj and go to Tahirpur or Takerghat in a couple of hours. From any of the places you can rent a boat to tour Tangoar Haor. In the rainy season, many tourists rent a bojra, a spacious mechanized local boat suitable for an overnight stay, in Sunamgonj to visit Tangoar Haor. Renting a bojra costs about 10,000 BDT a day. However, it is not a good idea to visit Tangoar Haor in the rainy season without a life jacket and other necessary precautions in view of the rough and wavy waterline, despite the unrivaled splendor this large body of water exhibits this season.

The best option is to rent a motorboat (a boat with a steam-like motor) from Sunamganj, travel to Tangoar Haor via Tahirpur and finally reach Takerghat, which is a Bangladeshi limestone mine at the foot of the Meghalayan mountain ranges that it is currently in an abandoned area. state.

Lalakhal, which is another major tourist attraction in Jaintapur Upazilla, is covered with hills, natural forests, tea gardens, and rivers below the Jainta Hill, which is part of the Meghalaya mountain range of India. Flowing from the Indian side, the Myntdu River enters Lalakhal as the Sari and meets the Guaiyan River after passing Sarighat. In a nearly 12 km stretch of the river from Lalakhal to Sarighat, the color of the water remains transparent green in winter (as well as in other seasons when it is not raining) due to minerals that flow with the water and the sandy river bed.

On the eastern bank of the Saree River, you will find the "Lalakhal Tea Garden".

A tourist can experience the green water river, the Mountain Range and the Tea Garden at the same time in Lalakhal.

Tourists usually travel to Sarighat, which is 42 km from Sylhet city center, by road and then rent a boat to reach Lalakhal. The one and a quarter hour boat ride (mechanized) on this crystal green water with lush green hills on either side of the river is a relaxing sight for any nature lover.

There is a boat station in Sarighat operated by Nazimgarh Resort. From there you can rent different types of mechanized boats to travel to Lalakhal.

It is also possible to go to Lalakhal by Micro Bus or Private Car. Not far from the Sari bridge there is an old structure that used to be a tavern named after "Iraboti", the princess of Jainta province, in the middle of the road. Lalakhal is only 7 km from this landmark. Tourists can embark on a trip to Zero Point by boat from the River Queen restaurant. You can rent a minibus for 3500-5500 BDT depending on its size and brand, although it would cost more on weekends (especially on Fridays).

Locally made mechanized boats can be chartered from Sarighat for around 1200-1500 BDT, while special boats from Nazimgarh ship station would cost 2000-5000 BDT. 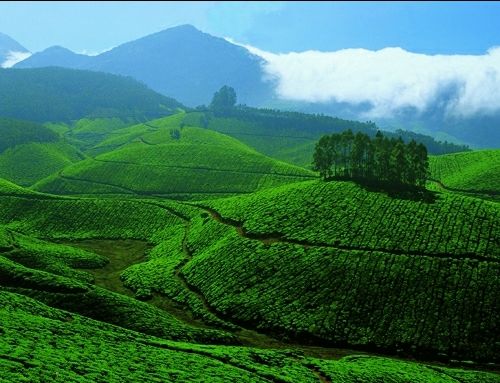 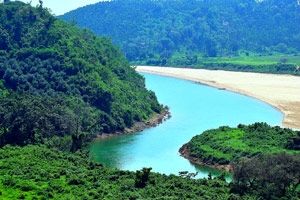 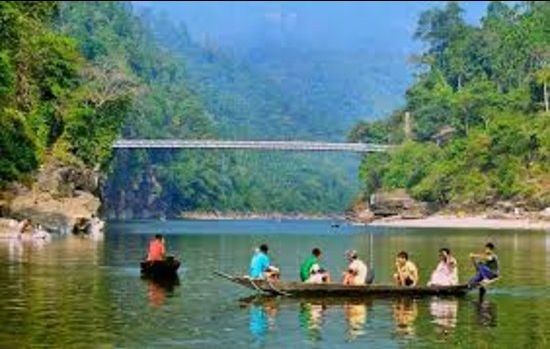 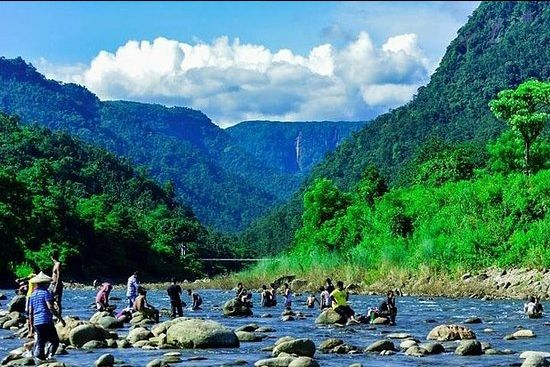