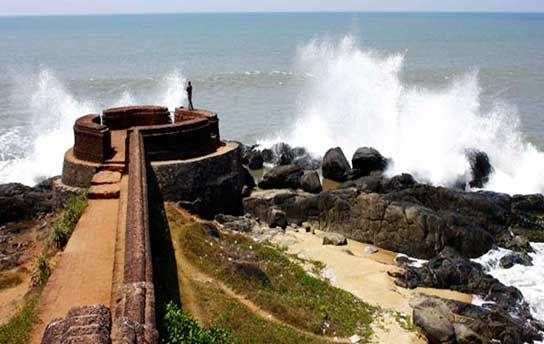 After getting down from the lockabawari, after breakfast and started asking the Road of Kasargode, it was known that the condition of the road is just fine till the time of the day, but when the minds of the house were heard from listening to such discussions, then proceeding So it was decided, then on the Kanhagad-kasargod road that ran out. Now, talking about the road, about sixty kilometers of the total deposits of Biyanabbe Kilometer was just narrow road, on which was visible on both sides Thick The forest was not going to be seen in the back, therefore, the mind was reaching it quickly, but if the vehicle reached it then it is from its time. Finally we got a good road. After Sakri roads, the importance of good roads increases and they look a lot better. Then listening to songs with pleasure, they went ahead while enjoying the road. Reading on this road, I do not know how the mind slips out, that we have to leave, and if GPS continues to cooperate, then we started asking the path of Kasargod, thus adding eight to ten kilometers. From where I remembered from there, then back to Bekal Fort.A lot of space has been provided for parking here; First, the car was parked right under the coconut tree; Te saw then placed elsewhere removed from there. After reaching here, experiencing very hot heat, after the cold drink, we took a hat to save the child from heat, and inside the fort running, read for information about Bacal Fort -

Three hundred years of existence is located in Fort Casale of Kasaragod in Kerala, which is the biggest and historical fort here. Its height is only one hundred thirty feet above the sea level. Its construction was made by Shivapu Nayak in 1500 The trick is to be reached here. It seems to be reaching here that the eyes of this place will remain here, the Arabian sea on one side and the beautiful view of the fort on the other side. It is one of the seven wonders of India. There is also a park for children, which is famous as the Bakel Park. Now as this is my first experience of this sea-view, there is no place for happiness, on the other hand my daughter's The first experience was only at the age of four months. Because we are from North India, then we can not easily get a chance to see it, seeing the waves of the sea, it seemed as if they were watching them. To get away from here due to very strong sunshine and hurry to go forward Lying Overall, the decision to go to Benak Fort was excellent and leaving it to Kerala, it is such that there was a lot left. So, in this way, in the next post, in Mangalore, you can also see here.