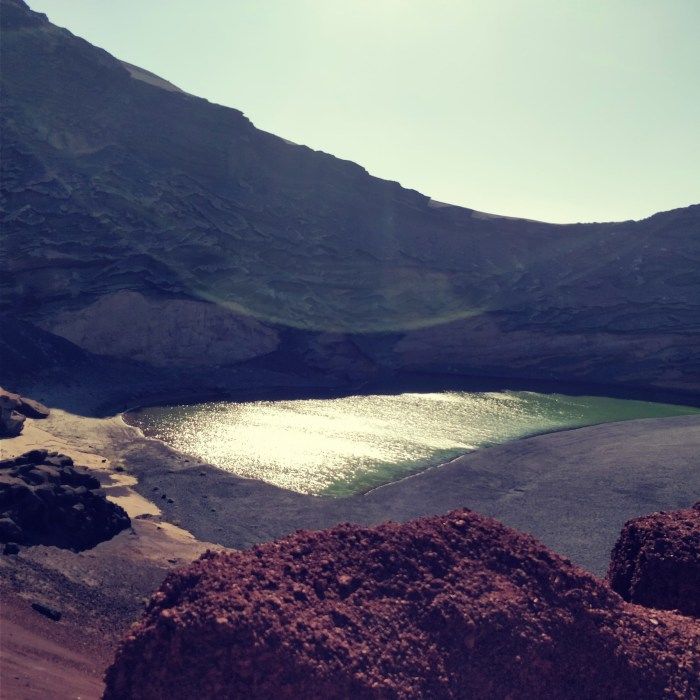 These wonderful travel quotes, written by some fabulous REAL people, who are one among us, are my most treasured travel inspirations. More power to them for being unapologetically fearless to follow their heart, defy the norm, and continue to be a driving force in many of our lives.

Without underestimating what I take back from each traveled destination while keeping an eagle's eye on where I would go next, let me share with you our most recent travel experience in one of the Canarian Islands, Lanzarote, in the Atlantic Ocean. Sandee's wish to run the Half Marathon at Gran Canaria and the cheapest connecting flight from Canarian Islands back to Zurich took us to this beautiful piece of land which had emerged 15 million years ago after a volcanic eruption. It'

At the cost of sounding cliché, I confess that I too at some point in my subconscious mind had dreamt of being on an island surrounded by deep blue pristine water to appease my conscience and an azure sky over my head to marvel on the beauty of my existence in that space of tranquillity. Speaking psychologically, dreaming of being on a desert island actually means that you may have a craving for solitude. You need to make a little space for yourself. But isn't that actually true? Don't we all crave for solitude amidst the busier lives that we are forced to live? Our dreams are a reflection of these yearnings. And they sometimes actually come true ????

"It's the possibility of having a dream come true, that makes life interesting" -Paul Coelho

Staying at Lanzarote was indeed " A dream come true" for me. It was surreal. There were several bizarre moments, mixed with melancholy and cheerfulness. I reflected on my past, relived through all my dreams, gazed at my present, and quivered at the thought of what my future would be like. Sometimes just being at such a place can just make you feel so alive. It was short but the most fulfilling trip that one can have in 48 hours. Sharing with you our detailed itinerary and experiences of two days spent awesome well at Lanzarote.

Day 1 - Relax! Discover the Island on foot or cycle

Be ready to be stunned by everything that you see ????

A striking combination of colors

Where else have you seen such a stunning concert of colors? Coral Reef Blue Sea kissing the sky with hues of different shades of blue at the horizon. Tall green Canarian Palm trees creating a beautiful contrast with the black Volcanic Soil below and a battery of white painted houses of same dimensions and pyramid shaped roofs very meticulously constructed. The Volcanic mountains of colors ranging from light yellow to deep orange to brown, with less or almost no sign of vegetation. It's a visual treat. You may feel nervous to have dampened the intriguing beauty of this island if you blinked your eyes.

Beaches- Lanzarote is a beach lover's paradise. The island is home to close to 100 superb stretches of sand, some of which are regarded as amongst the best in the Canaries, such as the huge sweeping bay at Famara on the rugged North West coast and the interconnected coves of Papagayo, located close to Playa Blanca in the south. You can a get here a complete insider's guide to all the beaches that Lanzarote has.

Soft play parks and open gyms - Like i always say, travel along with your kid and look for kid friendly places. Lanzarote is a best travel destination for travelers of all ages, but best for children and oldies. Soft Play parks for kids, open gym areas, and a chain of restaurants alongside the beaches makes it a perfect place for everyone to just relax and while away time. It is a great family holdiay destination.

Lanzarote has been a popular destination for cyclists of all abilities for many years. Its year-round dry and warm weather makes it really conducive for cyclists for long distance biking. The island's beautiful terrain also plays an important role in its intoxicating cycling pastime. Every year the island hosts the Lanzarote Ironman, an international triathlon competition that attracts many athletes who like to train on the challenging hills.If you take a city tour on a bus, you will find cyclists of all ages all along the road biking fearlessly at a blazing speed. You can see me cycling along with Mayra around "Peurto Del Carmen".

Day 2 - Take a drive around the Island on a guided bus tour.

This was a difficult decision for us because we dint want to rush through any place, even if we missed a few. But the guided tours primarily take you to all those places where you cant reach otherwise unless you cycle or drive. So if you are short on time, here is my best 3 picks on what you can't miss when at Lanzarote.

My 3 picks on "Must See places" of Lanzarote

It was a " never seen before" experience for us. When we were at Amalfi Coast last month, we thought the view from the top at Ravello was the most beautiful thing that we had ever seen. But what you will see here is beyond one's understanding of how many ways nature can just overwhelm you with its beauty and give you some pause. The volcanic eruptions that occurred between 1730 and 1736, and in 1824, gave rise to numerous structures of high volcanological interest.

The absence of a mantle of vegetation, the extreme roughness of the forms and the variety of colors that exist (red, brown, beige, black and orange) next to the silhouette of the volcanoes and the abrupt coast, give the park an extraordinary beauty. You can reach there by bus or a private car. The tour buses go along narrow paths for about 10km through the national park and a unique volcanic mountains panorama can be enjoyed.

At the bus park you may get a glimpse of the crater depths, and see how a small dry bush, thrust into a hole, will immediately catch fire, how a bucket of water, tipped into another hole, will send up a great plume of steam into the air. Six metres down under the surface the temperature is already several hundred degrees centigrade.You may feel that with your own hands if you touch the volcano rocks or the stones (picón) behind the restaurant or near the fire place. It is amazing - here on the hill top is one of the "hottest" places of Lanzarote! And the volcanic mountains of the Timanfaya Park are still alive. You have to really see it to believe it. There is a restaurant " El Diabolo" where chicken and rabbits are prepared on the grill, which is powered only by the heat from the volcano heat below.

El Golfo is a half-submerged cone of a volcano, which over time has been eroded by the sea, leaving behind only the striated wall of the crater displaying a myriad of red and russet colors.At the foot of the crater wall is Lago Verde, a half-moon-shaped striking green lagoon. Its unusual phenomenon in the cove, where sea water has become trapped in the form of a lake and turned a striking acidic green, due to the algae which lives there. Its at the Papagayo beach.

It's an open air cave. The island born artist and architect Cesar Manrique conceived this 6 decades back. Entry to Jameos is by climbing down a stone-staircase into the first cave known as 'Jameo Chico', which has been turned into an unusual bar / restaurant, with views over a small lake.This natural lake has extremely clear water - regulated by the Atlantic Ocean - and is home to a species of blind albino crabs known as 'Jameitos' which are only found on Lanzarote.

Crossing the lake, by a narrow cobblestoned paveway we reached the 'Jameo Grande'. It's like walking out of the dark tunnel to be faced, suddenly with a huge open-air cave lined with tropical plants and the most fantastic swimming-pool you may ever see.This crystal-clear, turquoise pool is truly paradise, even if you can't actually use it, as swimming is forbidden. From the far end of the 'Jameo Grande' you can access the auditorium which has been constructed in part of the volcanic tube running down to the Ocean. The auditorium is used for classical concerts as it has excellent acoustics and for film screenings.

Hipotels La Geria - This hotel is 2 min walk from the Pocillos beach, surrounded by tropical gardens, just off. They have a wide range of outdoor facilities, including tennis courts and huge swimming pool - all bathed in year-round sunshine. Here you can also simply lie back on a sun lounger with a drink from the poolside bar. Relaxation can also be found in the hotel's on-site sauna. They have a large spread of breakfast buffet. And they have a variety of calendared events every night - Music, Dance, Magic shows, Circus etc. where you can just sit back and have a good time.

Solymar - Though you would find many restaurants along the shore overlooking the majestic Atlantic Ocean, I can't resist but mention this place where we had a full course meal on Day 1 and went back the next day again only to relish this yummy homemade caramel custard we have ever had. See below.

Few Intriguing and good to know facts about Lanzarote

The island's name in the native language, Guanche is Tyterogaka which may mean "one that is all ". Ochre is the island's predominant colour. Ochre is a natural clay earth pigment which is a mixture of ferric oxide and varying amounts of clay and sand. It ranges in color from yellow to deep orange or brown. It was formed some 15 millions of years ago following the volcanic eruption that formed the Canary archipelago The Island receives large amounts of sunlight and is almost never cloudy, there are usually over 3,000 hours of sunlight a year.There are five hundred different kinds of plants on the island, of which 17 species are endemic. These plants have adapted to the relative scarcity of water From 1730 to 1736, the island was hit by a series of volcanic eruptions, producing 32 new volcanoes in a stretch of 18 kilometres (11 miles). The colour of houses on Lanzarote is tightly controlled - all buildings are painted white, with green shutters in the countryside (for farmers) and blue by the sea (for the fishermen)

Kids can sometimes take you by surprise with their sudden outbursts of extreme emotions of love and joy. One such moment we did witness when Mayra put her foot on the sand for the very first time . She felt the chilled water gushing in and out with the waves with screaming joy. It was simply delightful. They are a powerhouse of enthusiasm and energy. They just know how to be joyous without any reason.

How do we lose these basic qualities which we are born with while growing up? What exactly happens to us, that we start looking for reasons to be joyful and happy?

It's an unfinished affair. I certainly can not have Lanzarote on my list of " Will come back soon" places. It felt like home. It felt like, I could stay there forever. With a heavy heart, we took the flight back to Basel. Click on the video below to get a glimpse of the spectacular aerial view of the island.

Which are your favorite destinations, which you think you are sure you will keep going back to?