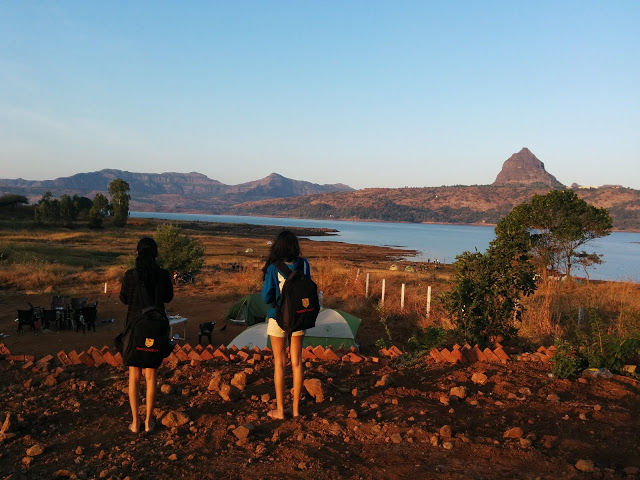 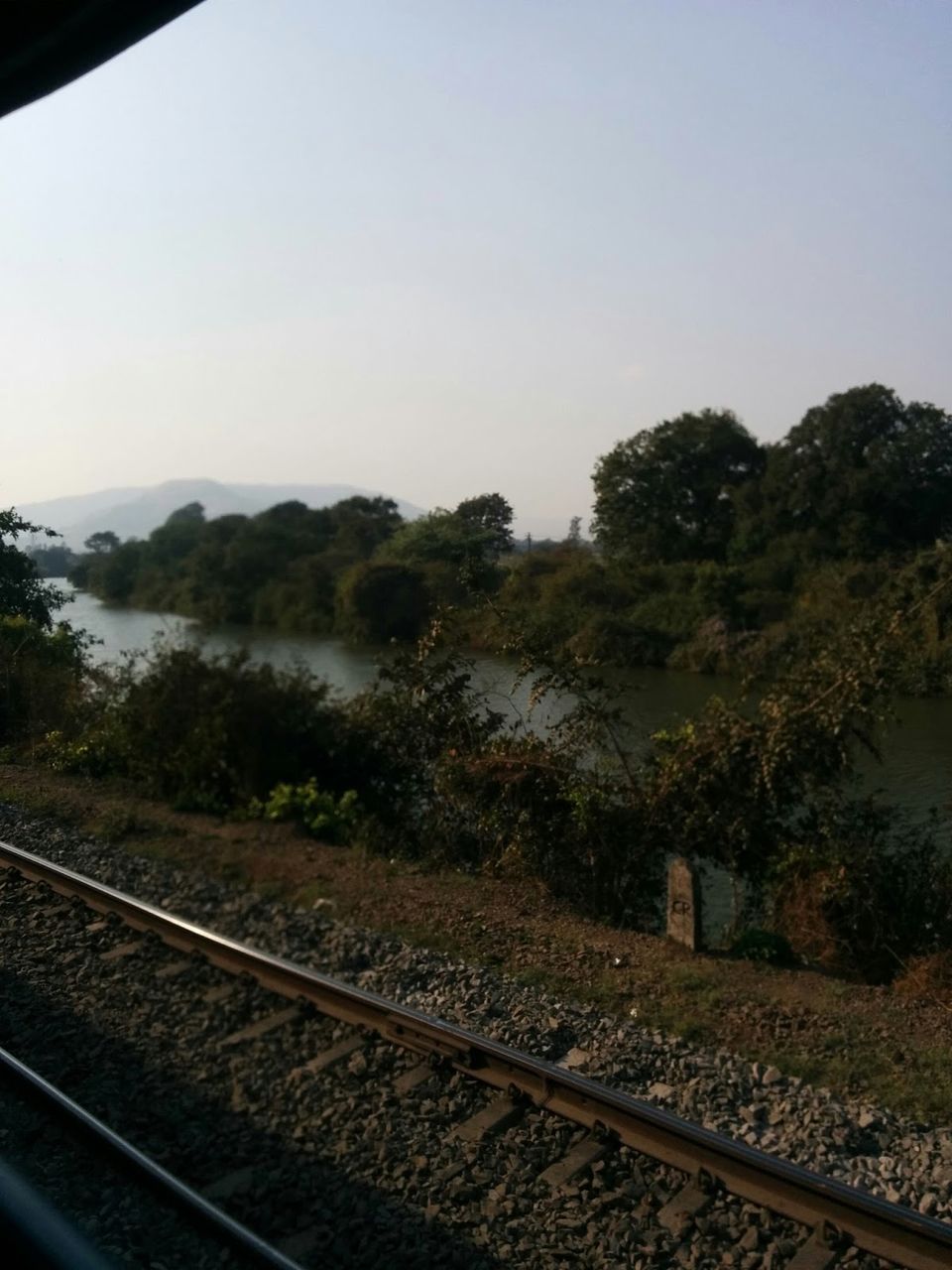 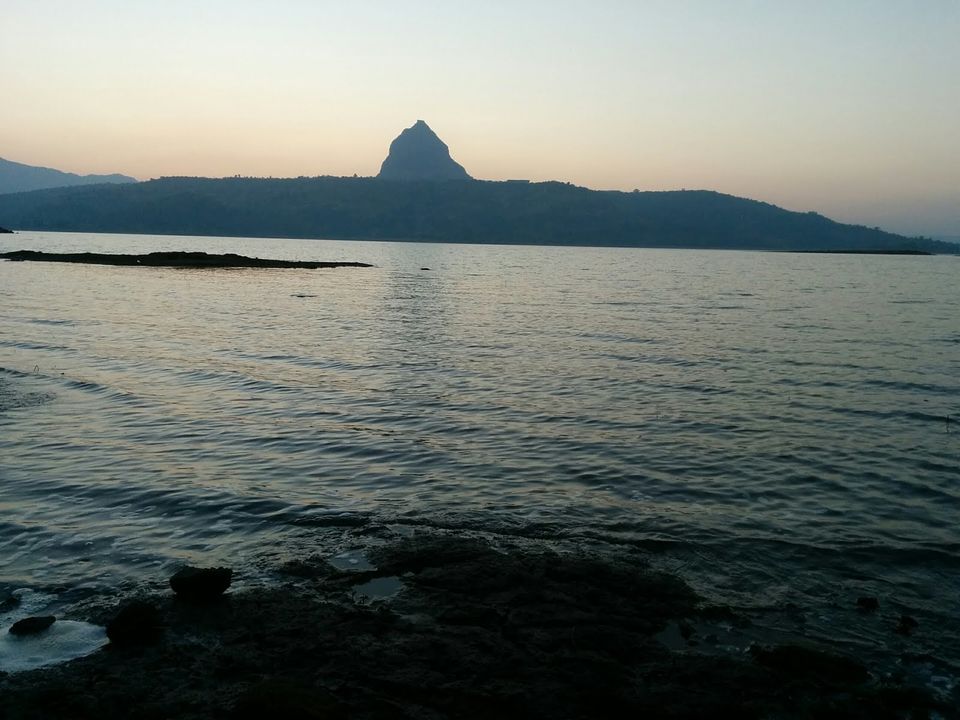 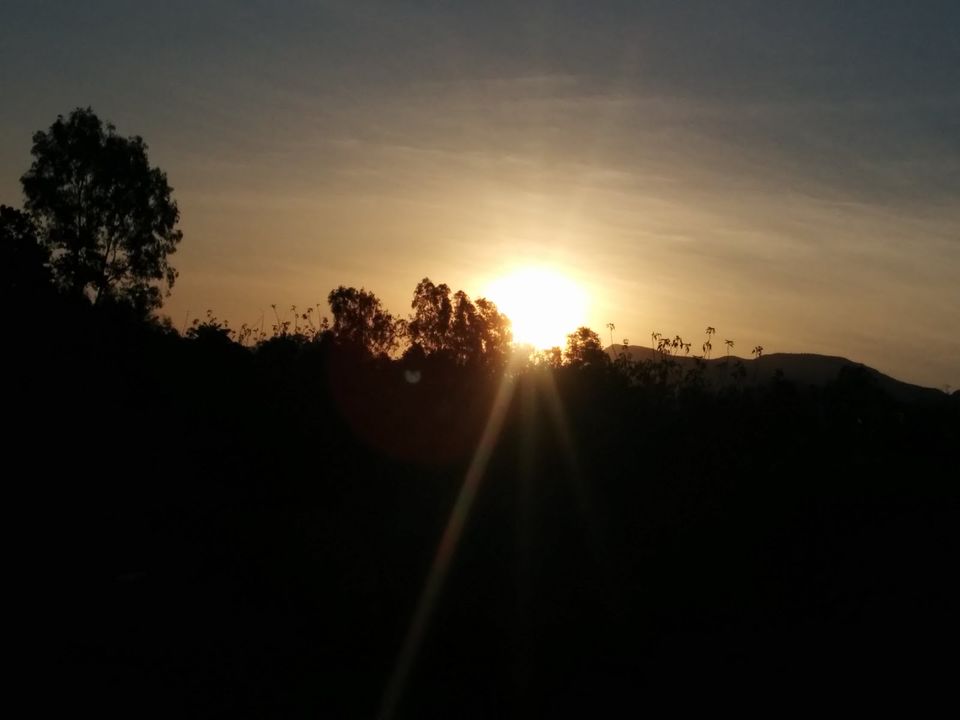 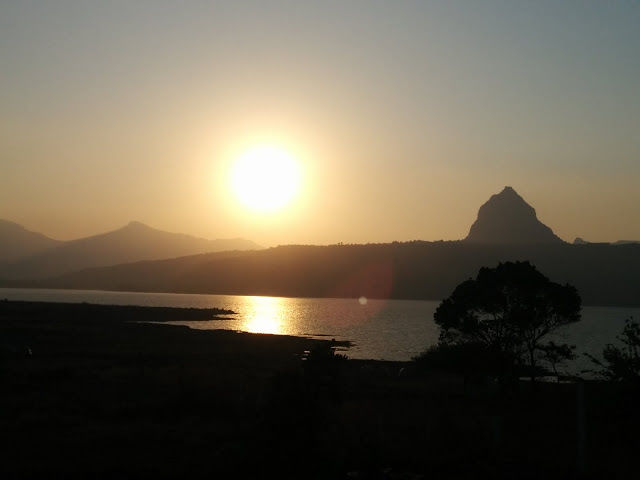 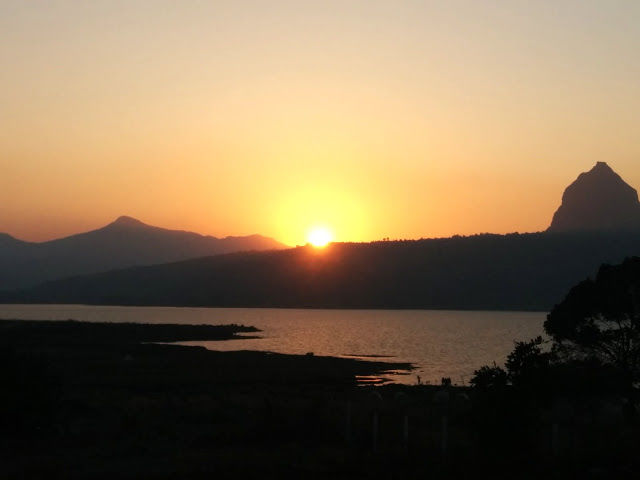 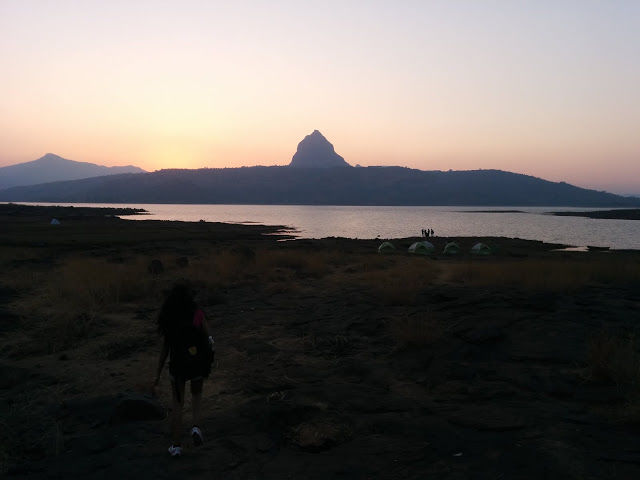 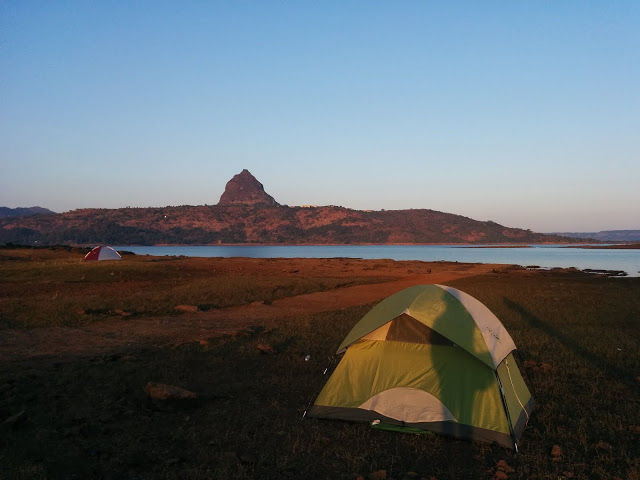 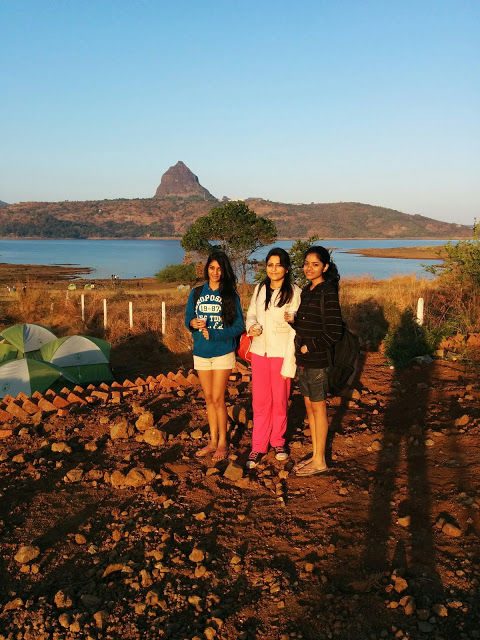 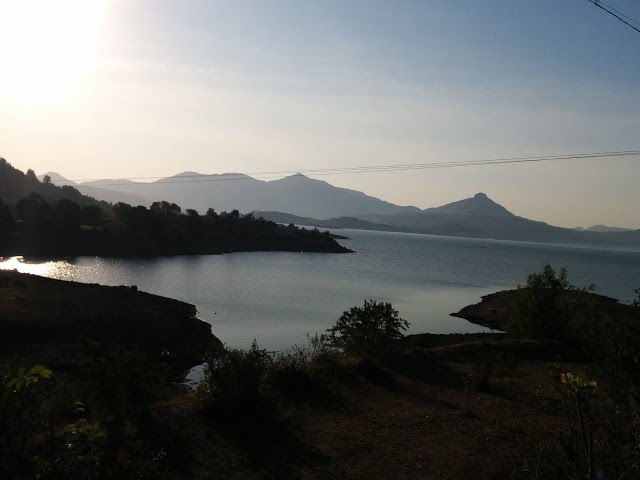 It's almost unbelievable when a trip you have been wanting to make possible for a long time materializes at the last moment. The turn of events on Friday, the 5th of Feb was such that we oscillated between a yes and a no, several times in a day, all for a camping getaway over the weekend. With the three of us in (and later a fourth), almost certain about the location where we wanted to camp, all that was missing was a plan. Relentless trying and calling several tour organizers did not help as everything was booked. Then, almost magically I got a call from a number that I had just dialled. "Madam, aapne call kiya tha (You had called)", a feeble voice from the other end proclaimed. '"Oh yes, I did call to check if you have availability for a camp for 4." Starting out with that very question was the only thing that made sense, nevermind the fact that I couldn't even recall the name of the tour organizers I had called in the first place. On asking, the amused voice replied 'Thakursai Camping'. More like, need meets want meets need. And so with a spot booked and arrangements made, the saga began.

As the local sirened its way towards the Khadki station, passengers flocked like herds of sheep. Within seconds the compartments were full, with men hanging inside-out, while we stood gaping, our eyes rolling from one compartment to the next - all in an effort to look for space, somehow, somewhere. We hopped onto the last compartment that looked relatively free, and had space to accommodate us, only to realize later that we had jumped aboard the luggage compartment. There we stood amidst fisherwoman who sat comfortably on the local's floors, in a pool of fish - their carefully picked catch squirming in a last ditch effort to survive. Meanwhile, we were just about glad that we had place to stand.

With a pick and drop arranged at Lonavala, we zoomed our way in a Nissan Micra, towards Pawana lake. Lonavala surprised us with a host of 'Maganlal' chikkiwalas in town, 10 at the least to count in a span of just 2 minutes. With the sight, we recalled our management lesson in 'umbrella branding'. The road bent and we swayed towards the interiors from the main highway. Crossing paddy fields, and hearing tales of Lohgad fort on the hilltop, the journey was replete with anecdotes from the Ghats that surrounded us.

In no time, the road took another bent, this time off-road, and down into the grasslands we waded through with bated breath. The hills and the water in sight, we waited for a herd of sheep to cross us by. There was no hurry, as we basked in nature at its best. As the car came to a halt, excitement took the better of us. We were welcomed with pakodas and 'high' tea, but more importantly the place was going to be our abode for the night.

Pawana (lake) was a breath of fresh air, much like its meaning that implies freshness and purity. At dusk, we soaked our feet in water, and internalized every bit of the soothing embrace that the waters had to offer. We marveled at the great expanse of the universe that carpets the day with sundown and twinkles under the brilliant gaze of the night skies. The dazzling stars and the clear sky, an extreme rarity was a waking reality as we peeped our heads outside the tent and lay flat on the ground. Spotting constellations, formations, the brightest stars, we were lost in the enigma of something so profound that the world had suddenly come to a halt. All that existed was the wilderness and us.

Perched in the tent inside, we chatted and discussed everything under the sun. Barbecued food gave us company while time flew by like never before. With torch in hand, we scrounged our way back to the top, where dinner was laid. Sick of the hostel food, the basic daal-roti and mixed vegetables with milkmaid gulab-jamuns to top, was a welcome change. Needless to say I stuffed myself with the softest galub-jamuns that immediately melted in my mouth. Our stuffed selves traced the way back. It was bonfire time. With minimal wood to spare and lots of dung cake by the side, along with kerosene we carefully stoked the fire. Singing along and soaking in the warmth, the night was at its sparkling best. As the fire died down, we had no option but to retire to our tent. Talks followed, and soon after the night took the better of us, as we coiled into slumber. Around 4 a.m. I was woken up by the sounds of  what seemed like water and the relentless wind that slapped against the body of the tent.  I layered myself with more clothes as seething cold pierced through the tent.

Sleep was hard to catch thereafter. The next I looked at the watch, it was 7 a.m. With the tent zip open, and the waters against the hilltop in sight, the morning had to be good. I lapped up the few morning hours of solace by the waters despite the cold breeze, meditating in parts.

Tea followed, with an unmatched view. We left the place but a part of us remained. The way back was filled with anecdotes about the number of movies' songs shot at various points around the lake, the birthday celebrations of the likes of Amir Khan and Vidya Balan in the boathouse club. The spectacular birds' eye views gave us company through the drive.

Even though I had feedback to share, Thakursai camping had been the warmest of hosts. They had started out just last year, but with no website to their credit yet so hospitable and packed was rather alarming. In retrospect, it felt like destiny had orchestrated its magical spell and we were ordained to stay right there. That we be awed spectators to the night skies, that twinkled and gleamed under the embrace of the Gods. For earthiness, both in character, and concept has its roots in nature, it is best witnessed in environments as pure and serene.

With time to spare for the next local, we had breakfast at Lonavala. Pancakes, and cold coffee was just what my hungry self needed. I couldn't resist myself from buying a pack of chikkis from the famous Maganlal chikkiwala. Local reiterated its essence characterized by wading crowds, women applying make-up, samosas doing the rounds, and more crowd percolating in with each station. All the stories that I had heard about the local, were after all true and not mere exaggeration.The saving grace this time around was the ladies compartment.

With a pack of unforgettable memories behind us, we haggled with the next autowallah at the Khadki station back to the hostel. The travesties of modern life beckoned yet again, as I found myself reminiscing about the weekend that was too short-lived. As they say, such is life dearies!

This trip was originally published on 'Travelogues: A traveller's revelations'.