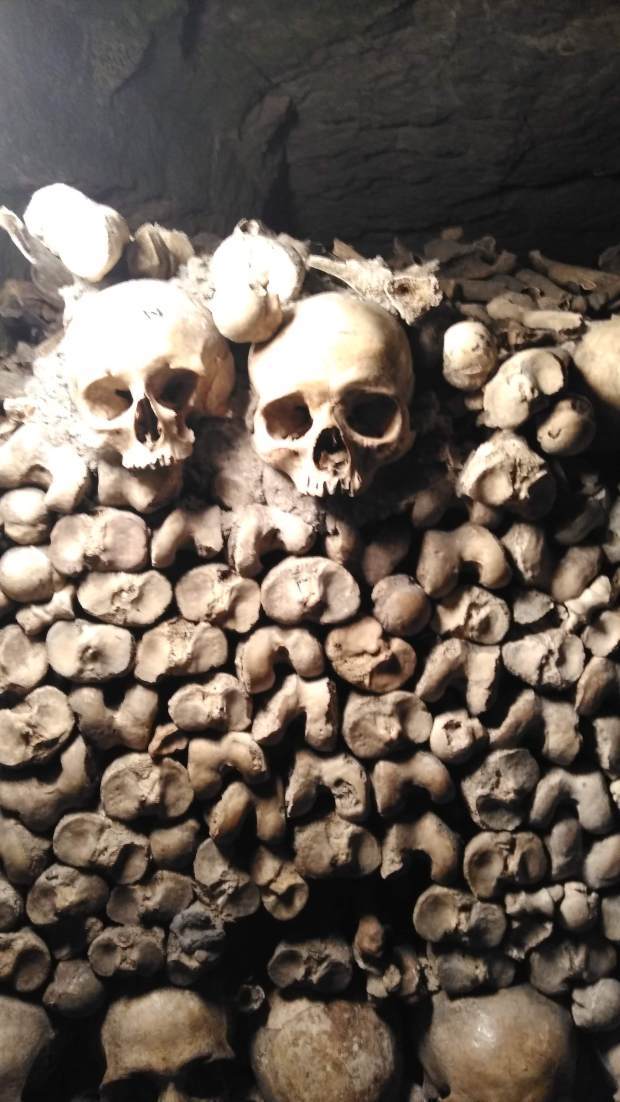 I had never visited a Catacomb. To be honest, I hardly knew about their existence, it was only while researching for my upcoming Paris trip that I came across the term Catacombs. Not that I was very keen to visit, I kind of found the whole concept macabre and creepy but I have friends who literally love these places and they almost threatened me that I shouldn't come back from Paris without visiting the Catacombs. I still had hoped to skip citing time constraint but life seriously had other plans for me and I found myself getting creepy goosebumps inside the catacombs of Paris. Thanks to R whom I befriended in Charles de Gaulle airport. He is a young man who was hellbent on taking me to the catacombs and he succeeded.

Our walking tour of Paris from Champs de Elysses to Notre Dame ended around lunch time. We had a beautiful meal of Falafel and Fries at an eatery owned by a Bangladeshi man. While eating lunch I also started a conversation with the man about Bangladesh. As my family originally hails from Bangladesh we developed an instant camaraderie. This man guided us to a shorter way to reach the catacombs. It took us a 20 minutes train ride on an RER line to reach the place.

The tickets to the catacombs are 13 euros and it takes around 45 minutes to see the place. Be prepared for a long queue at the entrance as they allow only 200 people inside at a time. Once I started climbing down the stairs I was feeling an eerie sensation. I am not brave heart when it comes to graves and cemeteries and more than scary, I find them macabre and perhaps grotesque. Just to think of a person who was alive one day and then see him only as a skull and bone makes me feel uncomfortable.

Nevertheless, I completed the walk, even though there were moments when I felt like going back. The initial 15 minutes of the walk was boring and uneventful with nothing in sight. It was just walking inside a cramped and dimly lit tunnel but then the ossuary started. There are no railings or anything and if you wish you can actually touch the bones. At one point while clicking a picture we almost tumbled a stack of bones.

The history of the catacombs is written on the walls and one can also buy an audio guide for 3 euros. The entire catacomb is not open for public display only a portion with the relatively younger collection is open. A part of the catacomb has also turned into huge rocks of calcium deposit. Even though, initially I was apprehensive but once completing the tour I felt it was a completely new experience worth my time and money.

Once we came out of the Catacombs we went to the store where stuffs related to the catacombs are on display. The catacombs were our last destination in Paris and the next morning we left for Pisa, Italy.