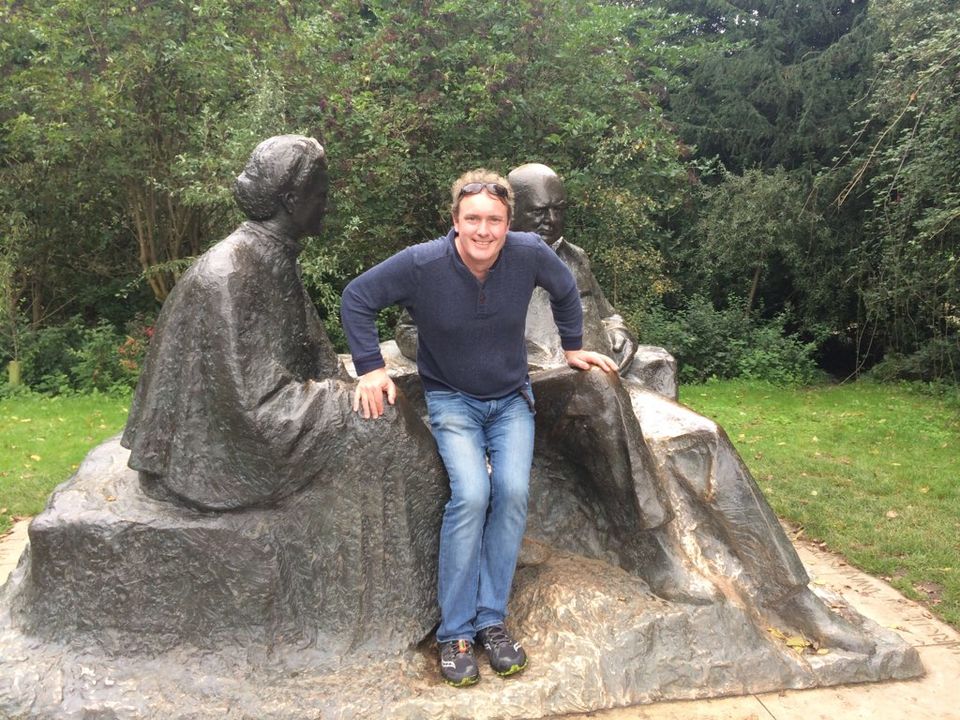 I returned to London shortly after completing the Chemin de la Liberte'. Keeping in line with my WW2 themed holiday I ventured out to Chartwell. The great British statesman, Sir Winston Churchill, lived in this home for over 40 years. The house is still much as it was when the family lived here.

Chartwell is a museum and shrine to the man who led Great Britain to victory during the Second World War. Now a National Trust property, it's an understated Victorian country house with beautiful gardens. Sadly we were not allowed to take pictures once we were inside the actual house so the only pictures I have to share with you are of the gardens and since it happened to be a rather overcast day they don't do the place justice.

I dig some digging on the internet and local records suggest that there was a house built on this site as early as 1362. Apparently the name Chartwell was most likely derived from the chart well that lies on the site and still feeds the ponds to this day.

The house that you will find there today was built during Tudor times. It was probably built as a hunting lodge. It is thought that King Henry VIII stayed there while courting Anne Boleyn who was living at nearby Hever Castle.

The house and land was purchased by Winston Churchill in 1922. A dark, red-brick, ivy-clad villa on a hill, Chartwell was said to embody Victorian architecture at its least attractive. Churchill set about remodelling the house straight away.

The house was transformed. Larger windows were added to let in more light. More rooms were also added. Having said this the house is not as grandiose as one would expect for a victorious wartime prime minister. The house has a homely personal feeling to it.

Churchill and his family did not frequent the house often during WW2 because of its close proximity to the English Channel.

It’s no secret that Churchill’s financial situation was often unstable and in 1938 Churchill was almost forced to sell Chartwell. Wealthy friends of Churchill intervened and bought Chartwell for the National Trust in 1946 on the condition that Churchill and his family could live there for the rest of their lives.

Today Churchill’s presence fills every nook and cranny of the house. The house is filled with memorabilia from his life and the walls are lined with photographs of the famous people that he met.

Churchill’s love of painting was a massive part of his life. It provided some relief from the periodic bouts of depression he famously referred to as his ‘black dog’. In the 1930s Churchill converted a cottage on the property into an art studio and throughout the rest of his lifetime completed up to 500 paintings. Queen Elizabeth II has one of Churchill’s paintings in her private collection. There are around 130 of Churchill’s paintings hung on the various walls of Chartwell.

The gardens at Chartwell are amazing. The views are spectacular and just as much as I enjoyed viewing the house I also loved walking around the gardens. I think that for anyone wanting to get a better idea of just who Churchill was, a better understanding of his private side if you will, then a visit to Chartwell is a must do.