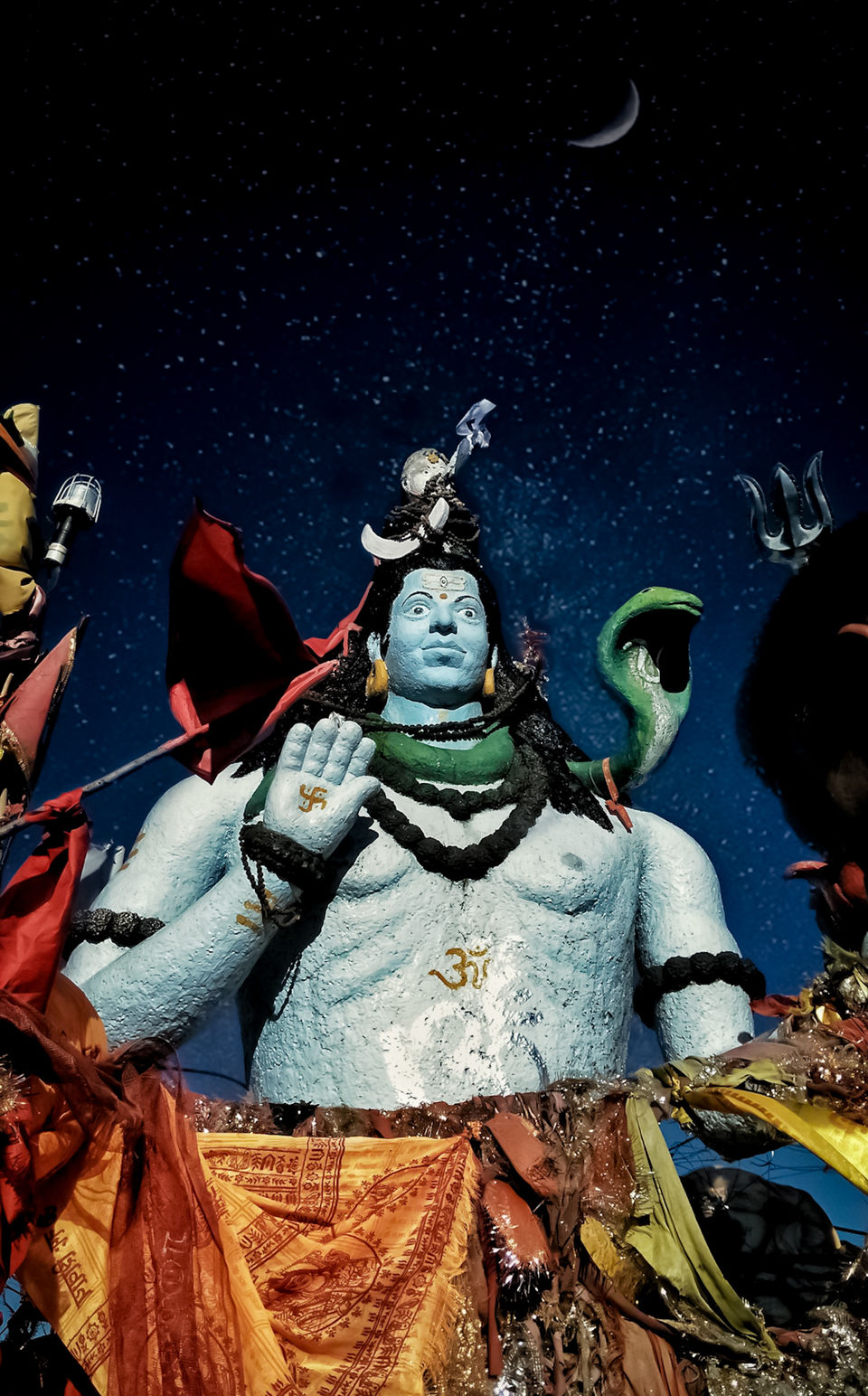 Churdhar peak is the highest peak in the Shivalik ranges standing as tall as 3647 meters, located in the Sirmour district (In the outer Himalaya region). Churdhar Sanctuary is surrounded by lush green forest with deodar trees. Churdhar is otherwise called Churi-Chandni Dhar (Bangles of snow ridge). Shri Shirgul Maharaj is widely worshipped in the Sirmour district, and Churdhar peak is named after him Chureshwar Maharaj. It is rich in flora and fauna. There are two ways to reach the top, one is long which starts from Nohradhar, Sirmour (14 Km), and the shorter path is from Sarahan, Chaupal (8 km). Hiking difficulty is moderate to easy from a long route but, it gets steep and a little difficult from a shorter route.

In this blog, I will share my experience of climbing this pinnacle. I have climbed it on numerous occasions, and I will sum up my involvement with a solitary blog.

Climbing a peak is always pleasurable when you are accompanied by your friends. We took the longest route to start our excursion because that was the nearest starting point from our habitation. We boarded a bus from ochhghat (Solan), which is at a distance of 80 km from Chandigarh. It was an early morning bus which started at 5:30 in the morning from solan. We arrived at Nohradhar at around 9 am. After breakfast, we gathered food items to eat on the trail and to cook on a campsite. Yes, we had decided to camp this time and, it was the best decision I have ever made.

We began to climb around 11. In the beginning, trails were steep, dusty, and somewhat intense to climb. It was a three days trip. It was winter, so we had to carry a lot of things from cooking vessels to blankets and every possible object we might need for camping. I was carrying a lot of weight that made my climbing pace slow and, I used to get drained soon. So here's a piece of advice, never overpack things which you will easily find on the trails. Carrying 10kgs on your back (at the most) will give you normal speed. To tackle the first 3kms of the trail, you need a bit of hiking practice before you go for the Churdhar summit.

It was dusty, Stoney, and sun legitimately on the head that drained most of our energies in the first 3kms. As and when we were reaching closer to our destination, weather unexpectedly changed, and it was the most astounding and slackening up weather any hiker can wish. The trail was pleasing, with trees and brambles covering the way, slow and cold breeze spouting over the face, the sound of little water currents, mellow aroma of wilderness, and birds enchanting in the background filled us with freshness.

We kept on walking for another 3 to 4 km and reached the second base camp called 'dusri'. It was around 4:30 in the evening. We decided to take a rest there and set up a tent. While some of us were setting up the tent, others searched around for dried stems and leaves to burn a campfire and to prepare dinner. It was almost 7:00 while, we were working and exploring the surrounding. It was a bit scary to be alone on that side but beautiful and thrilling to witness such views and experience it.

After gathering all the stems and dried leaves, we set up to lit them but but but we forget to bring any fuel to keep them burning. Luckily we had a big bottle of petroleum jelly (it was cold, you know). And then we started to prepare dinner because we were starving and it was cold outside. By dinner, I meant we made Maggie and roasted potatoes with a cup of coffee. Eating Maggie while camping resembles a custom for each camper. Also, indeed, we performed it well. At that time, food was like heaven on a plate. We gathered around the fire with food. It was one of the amazing dinners I have ever had. A sky full of stars, moonlight, cold breeze, and smell of food was making the surroundings even more pleasurable. I was savoring each bite and living every moment. I was ecstatic. I wish I could romanticize that moment even more but, no words and completely justify the feeling I was in at that time. My heart was full of emotions. It felt like I was complete, I have nothing to gain and nothing to lose. I am happy for whatever I have. I didn't want anything else as if I lived for the day.

No such moments can be passed without performing nattii in Himachal. We played nattii songs and danced around the fire. I was in a euphoric state.

I wanted to stay out of the tent a little longer to stare at the galaxy and capture every moment in little packets and store it into my memory boxes. But it was around -5 degrees Celsius and, I couldn't contain myself out any longer. Somehow I convinced my poor heart to get inside if I don't want to die. But it was so cold I couldn't sleep the whole night despite having blankets.

We woke up around 6 in the morning, packed everything, made breakfast, and started to trek further with limited things we might need for the day. Leaving the rest of all our stuff in the base camp. We trekked around another 5kms through lush green and covered with trees.

We managed to reach the third base camp called 'Tisri' in a few hours. The weather became more intense, windy, and cold. It started to snow around third base camp. We were lucky enough to experience it because it was the first snowfall of that season. We rest for a while, consumed energy bars, and started our journey again. Here comes the most delightful and intriguing piece of the whole climb. The trail was wet and made it difficult to walk through due to fresh snowfall. We were cold, freezing, our lips were numb, shaking legs, and no one's around aside from us. But the views were so mesmerizing we fail to remember the entirety of our agony. Those landscapes were what I live for. We were very close to the Shiv statue, yet a long way to go. That part of the trail had colossal rocks jumbled and bumbled into each other. We had to rock jump, climb to reach our destination, this was one of the most troublesome parts of the trek for me.

It was the highest point of the entire trek. The Himalayan peaks visible are Kinner Kailash, Shrikhand Mahadev, Kedarnath, and Badrinath. This place was also known as sunset point and, believe me, you could experience the most beautiful sunsets of your entire life from this point. That was the time when I felt myself, being young, free, and wild. Running short of breath in that cold weather. Sweating from inside and a light touch of the cold breeze caressing my hair slowly. And the view I was witnessing I had never seen before. I felt like, that was it. That was a place I always wanted to visit. My heart belonged there. I couldn't accept the obvious reality of what I was encountering. It was an alternate reality for me.

Again I wanted to wait there for a little longer; however, had to keep going since it was getting darker. And trekking in dark is always dangerous in such places for a beginner like me.

Finally, we arrived at a gigantic Shiva sculpture. It was too cold to even consider removing our socks and shoes to enter the statue area. In any case, we did it. That cold was so harsh and, the surrounding was full of stones (pointy stones) as construction was going on. My feet were full of bruises after walking here and there to click photographs and to worship.

After a while, we trekked furthermore towards the public rest area and also has the main temple. We settled our stuff in the restrooms and set out to eat something. There were a few small restaurants(dhabas) available where we could find parathas and chai. After having our meal, we wandered around that area and explored. I had never been to such high altitude areas before. It was getting difficult for me to stay out but, the views and landscapes were worth dying for. Following an hour, it was completely dark so, we couldn't wander anymore.

We did evening prayer and set out in the common area for dinner. After dinner, we went to our decided restrooms separated for men and women. We paid 5 rupees for every blanket we rent out for the night. It was a tiring journey, so I fall asleep as soon as I hit the bed. It was not super clean or hygienic but getting even those things in such places was more than enough for surviving the cold.

I was awakened by the babbles of the women around us. It was around 6 in the morning. We watched the sunset, cleaned ourselves, joined morning aarti, worshipped, had breakfast, and set out to descend. On our way down, we climbed shirgul Maharaj stone to worship. It is the main place to worship, and Churdhar is known as.

Ascending was tedious as we were new to that place and were enjoying every part of the trail, whereas descending was easy. The path was again a little intense, restricted, high, and steep it was a consolidated bundle as we were getting down through various paths. We again went to the shiv statue to worship and finally set down. Surrounding was so beautiful and hypnotic we lost our ways. We were unable to locate ourselves and find our way out. That area was so huge, and captivating we couldn't control ourselves but to get lost. After searching for our way back for a few minutes, we spotted a villager and followed him, and finally, we were out of the jungle. We were running down the trail because we were brimming with energy, and it was not even that cold. We reached 'tisri' again ate some food freshly prepared on the mud stove.

After getting refresh we began our journey towards 'dusri', walking for a few hours we reached 'dusri'. We gathered our things, did a little photo session, and headed towards the city.

To put up every feeling, every experience, and every emotion I went through on that trail into words is not easy and justifiable.