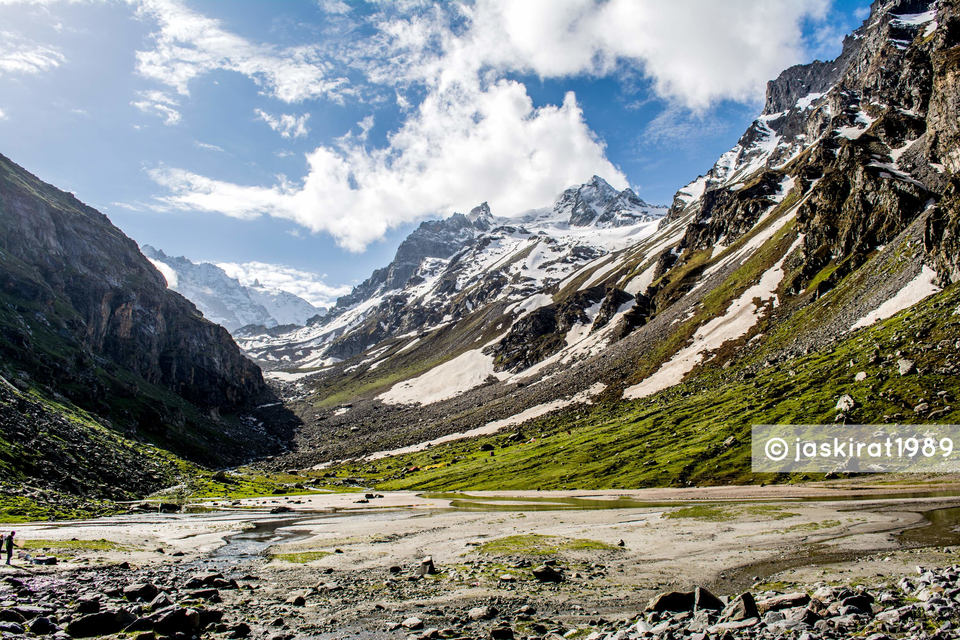 There were a couple of things I hadn't done until 2018, travelling solo and a multi-day Himalayan trek. So when I decided to do both together, I had no idea what I was getting myself into. Traveling solo for the first time can be a scary and an overwhelming experience. Fortunately, the group I met didn't let me feel like that.

I had booked the trek through Trek The Himalayas (TTH). TTH had shared all required information for the trek beforehand with regular reminders too, which made preparation for the trek easier. The starting and ending point for the trek was Manali which is an overnight bus travel from Delhi.

Arriving early morning in Manali, I hung around the collection point as other trek members started to arrive. The group was 25-26 people strong but I was the only one doing it solo. At noon, after a brief round of introductions, we all got into a Traveller to go to the starting point of the trek. 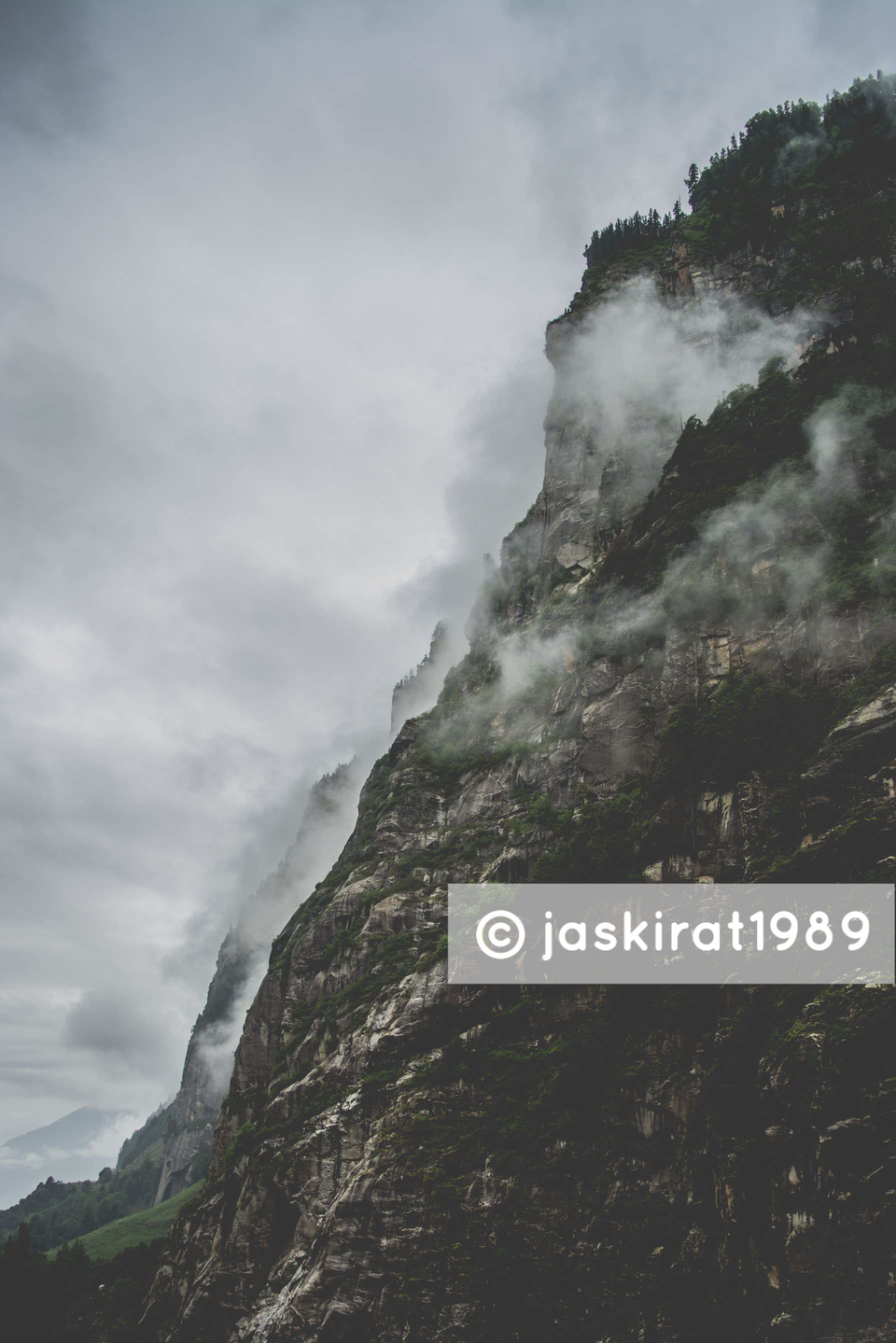 Starting off the trek solo at Jobra near Manali, with a group of 25 or so completely new people, I had little idea of what I was getting into. The weather wasn't playing along but resulted in some really dramatic images. 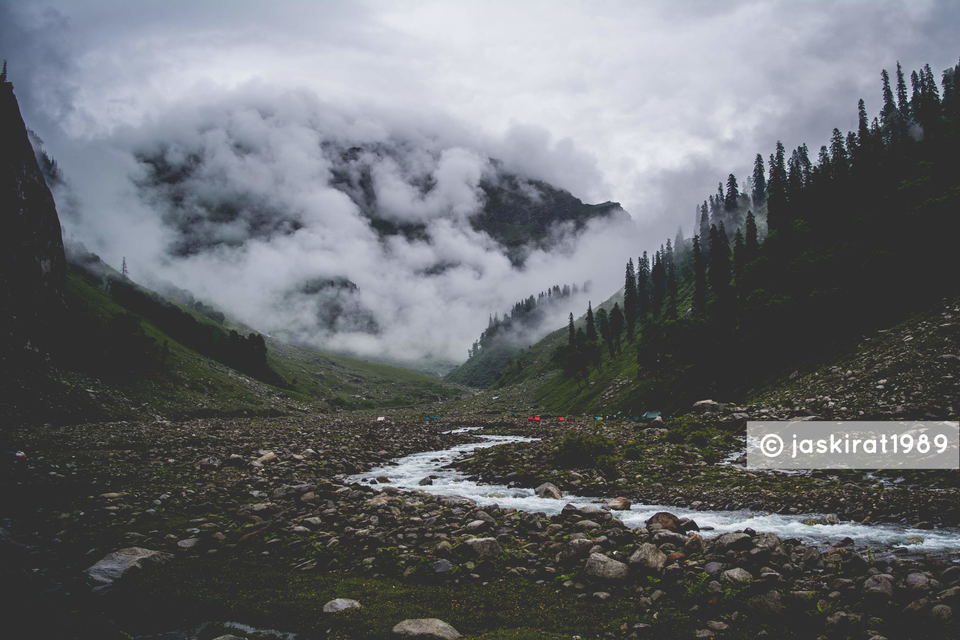 It was a short and sweet trek, but a trailer for the struggles ahead. We passed through breathtaking landscapes. The beautiful Kullu Valley is mesmerizing on this side. The walk was slightly tiring but not too bad. I didn't really go breathless yet. 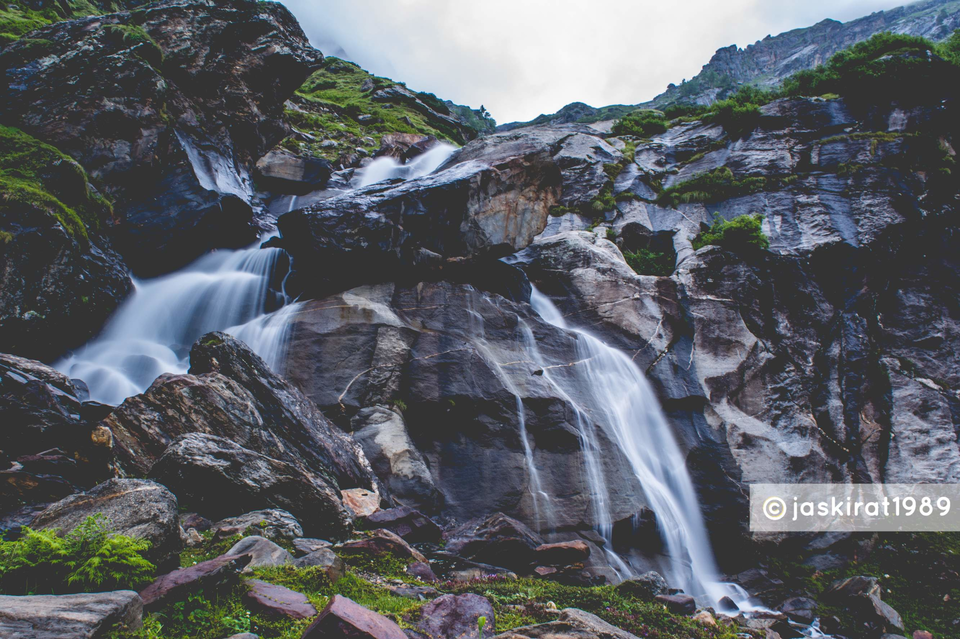 Our camp for the night was next to a waterfall which we filled our water bottles from. The weather was wet with a light constant drizzle that wasn't really a bother.

The people in the group were starting to mix up well together. We all gathered together in the dinner tent, had a round of 2 Truths One Lie as introductions and played bluff.

After dinner, lying in my tent, I could hear the waterfall hardly 200m away from me. It's soothing yet intimidating in a way... Sleeping in a sleeping bag and a tent was new to most of us. I hardly got 5 hours of sleep while some others spent the entire night sleepless.

A view I won't mind waking up to every morning 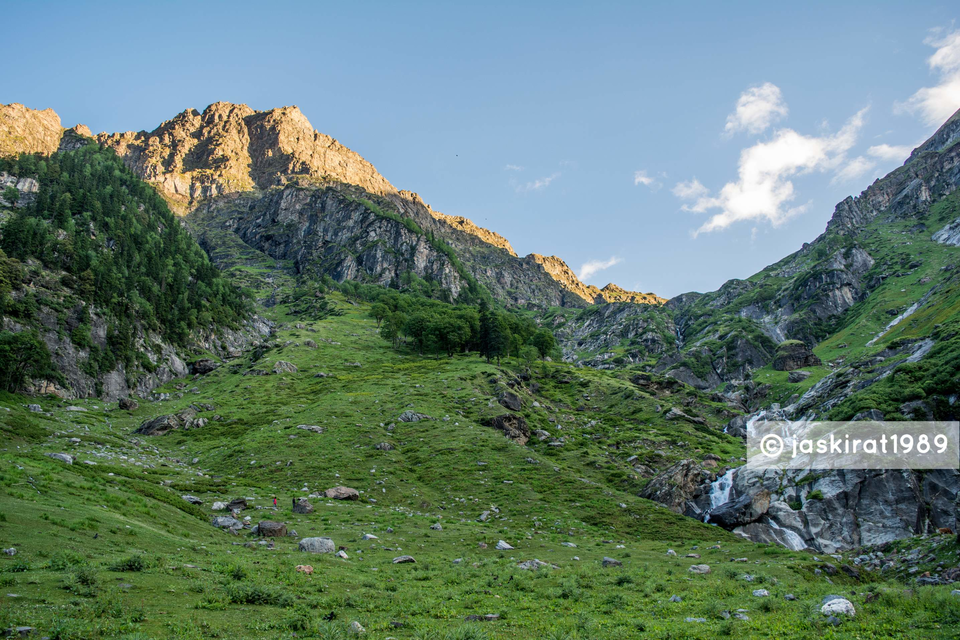 Waking up to a clear sky and this view was amazing. Even though most of us didn't get much sleep, we were fresh and ready for the climb up to Balu ka Ghara. 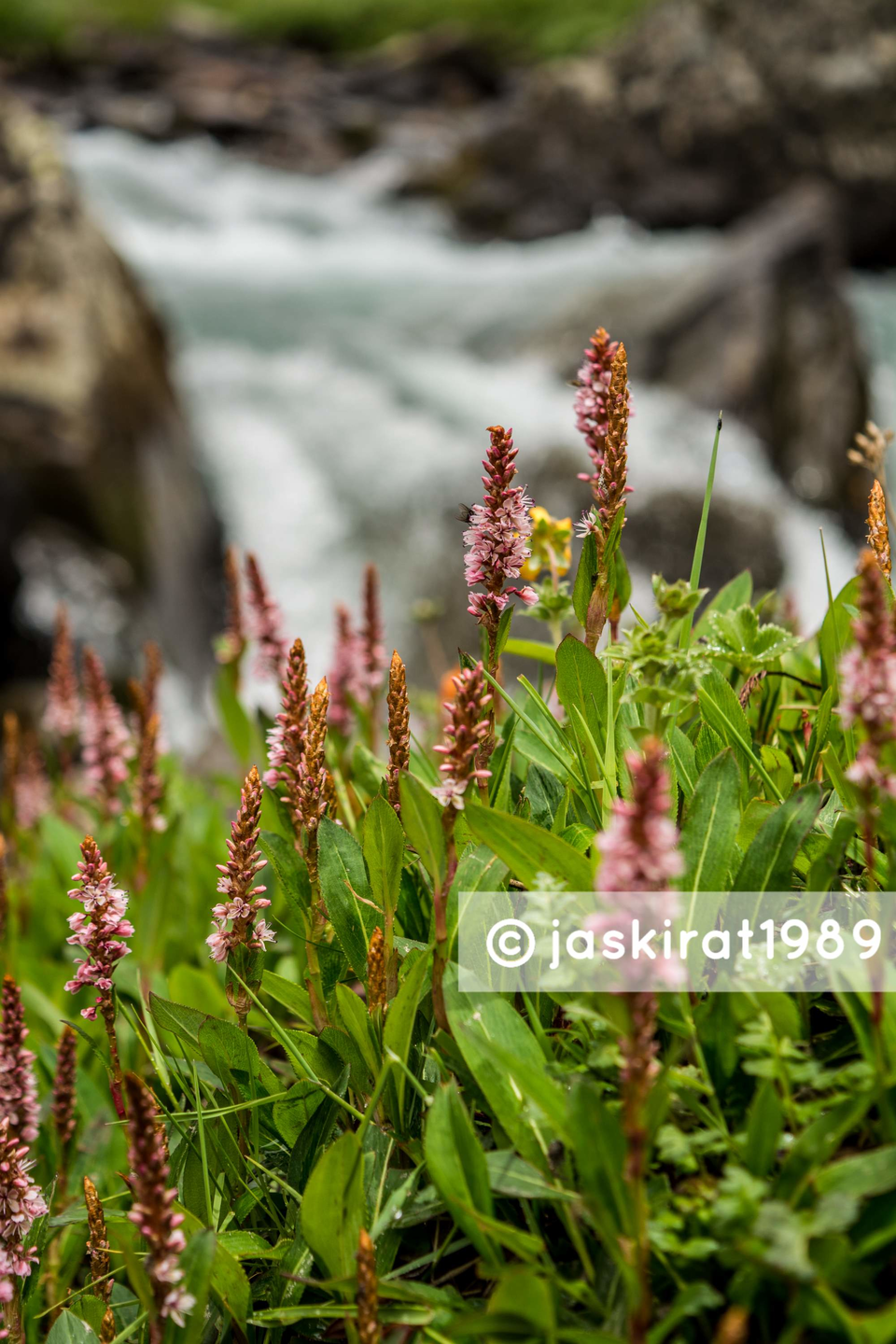 The trail just kept on getting more and more beautiful. The mountain stream was a constant companion. We filled our water bottles from it. Drinking 4-5 litres lf water is necessary to avoid AMS. Despite that, many of our group were getting headaches by now. 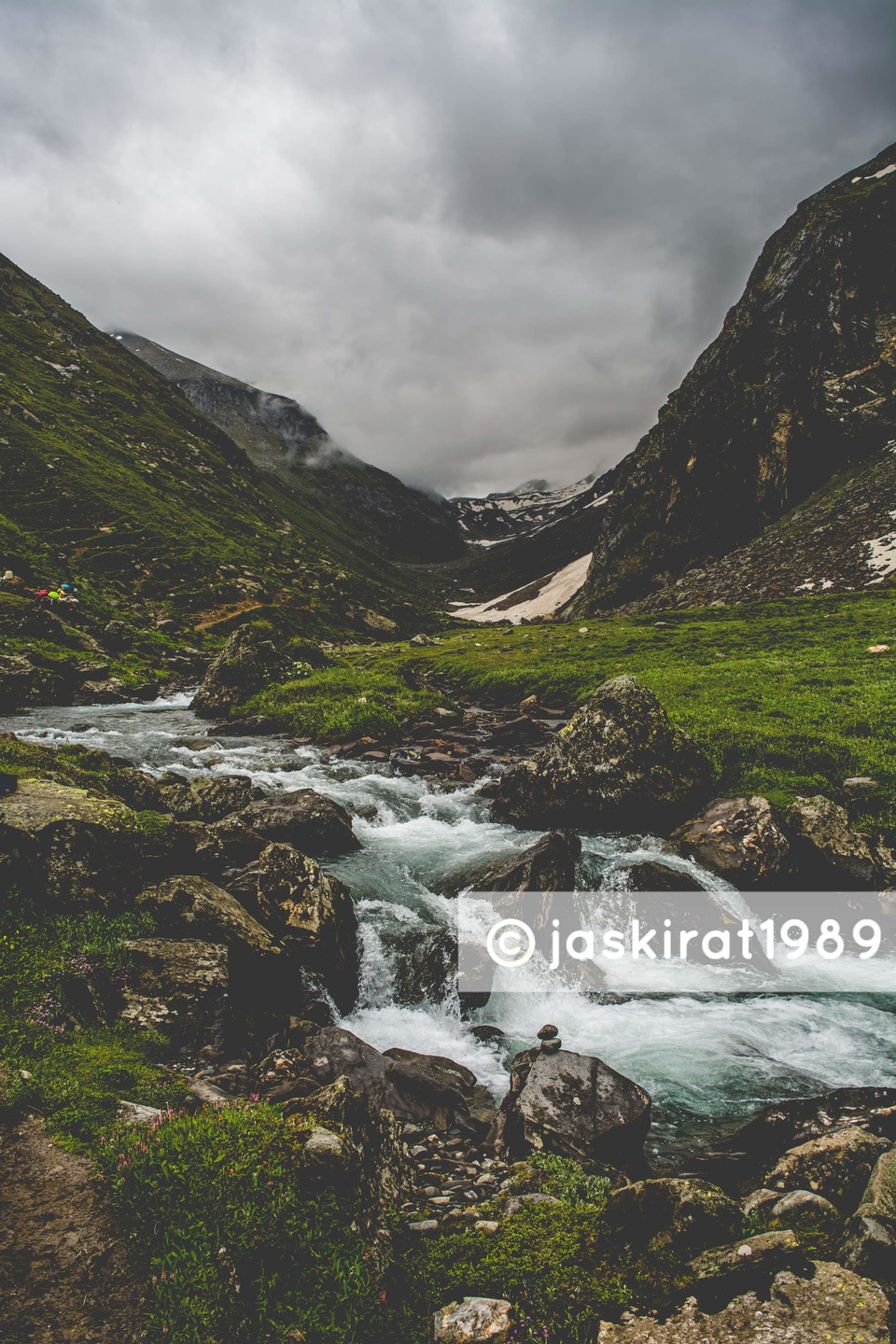 A couple of our group members fell in the stream while trying to fill their water bottles. While on a trek, with wet weather and cold temperatures, this can be a huge inconvenience. Most of your warm clothes get wet and you just might catch a fever. So if you're on a trek, you can't be too careful...!

Though we were greeted by clear skies in the morning, it used to get cloudy by noon and it rained soon after. The rain made it harder to climb as the rocks and muddy patches turned slippery.

The camp was surrounded by high cliffs on two sides. Clouds were rising up through Kullu valley and passing over us, towards Hampta Pass, showing us the way. The weather by now was very cold. Washing our utensils, washing our faces or even brushing our teeth was a monumental task as the water in the stream was ice-cold!

Woken up by a mule about to trample me in my tent at 4:15am, I decided to take a few long exposures. 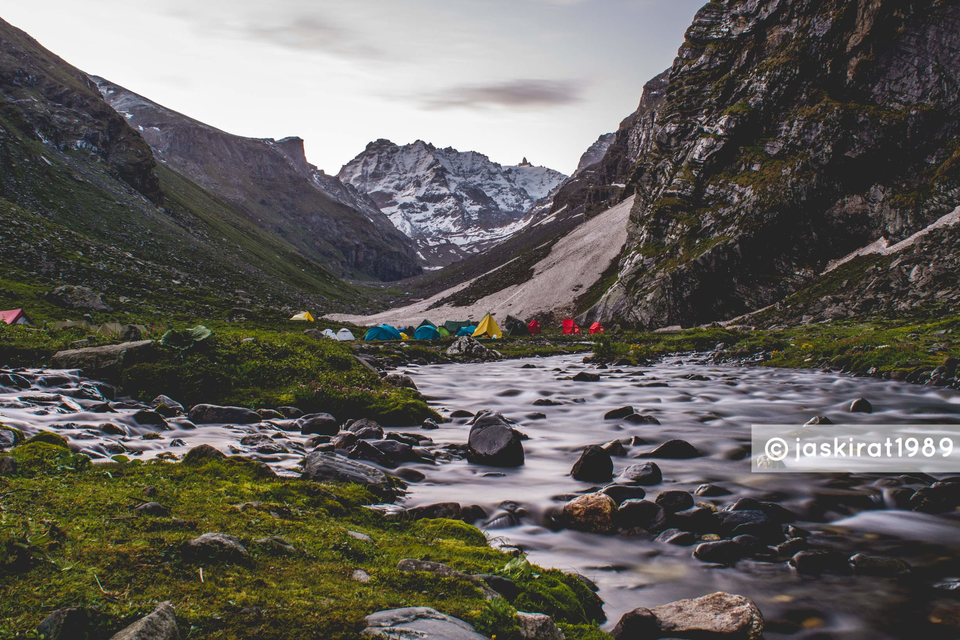 Another night of broken sleep, this time I was a bit worried. It was going to be the longest walk, highest altitude gain and the toughest part of the 5-day trek.

We were starting the day from Balu ka Ghera at 3590m and would be climbing all the way up to 4300m when we reach Hampta Pass. We started at 7 in the morning so that we could reach the pass by noon, to avoid rain/snow fall.

Balu means sand in the local language. Balu ka ghera is a flat area where the stream deposits its silt and hence the name.

The trail got rockier with huge boulders that we had to climb or step over. I was thoroughly enjoying the climb as we crossed Balu ka Ghara. The climb was tough and tiring. A lot of our group members were struggling with the climb. We were running out of breath as the altitude increased. The weather got cloudier, colder.

I was not expecting snow. In fact, I wasn't even expecting it to be so cold. The only trek I had done before this was Triund, and frankly, I though it wouldn't be any colder. Severely underdressed, my poncho saved me from the wind and snow.

The day started off normally. My pace was good. I was leading the trek for some stretches even. The landscape was breathtaking. Tall snow covered peaks all around. About 15mins before we reached Hampta Pass, it started snowing. And it wasn't the Christmasy soft snow, but almost hail-like shower of ice.

I was the 3rd person to reach the pass from our group. My head started to hurt when I reached. That headache stayed with me till I descended to our camp for the night, Sheagoru. I was mostly walking alone due to my pace.

We stopped to rest and let the group re-group, had our lunch while the wind and snow battered us. Hampta Pass is at the same altitude as Rohtang Pass (4300m), yet the conditions were harsh. The landscape was rocky, unforgiving.

The sight of Spiti from Hampta Pass 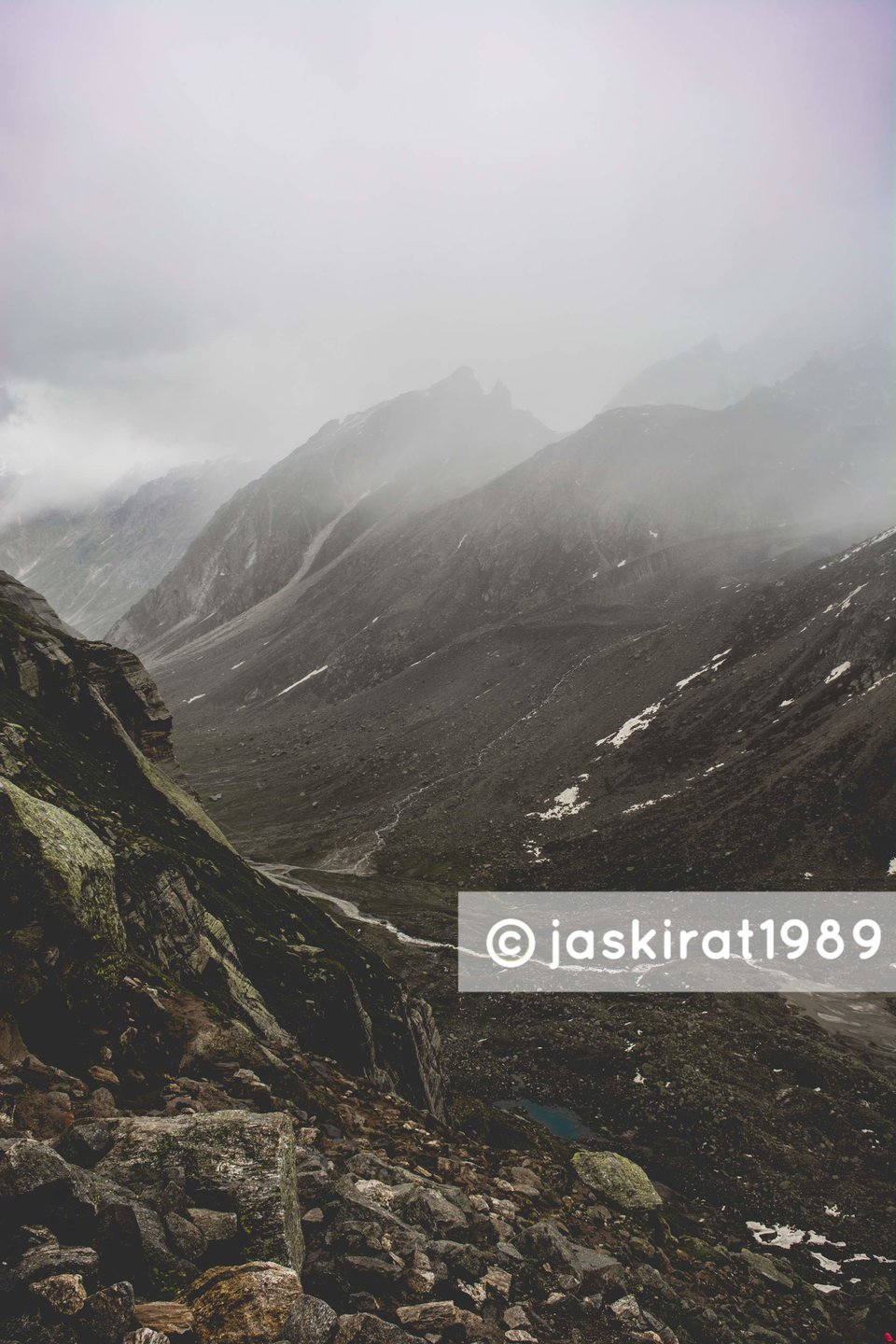 Crossing the pass, we were greeted with the sight of Spiti Valley. Starkly contrasting Kullu Valley that we had climbed, Spiti had tall sharp peaks, which were mostly devoid of vegetation. The view left me breathless, speechless and intimidated.

We were warned at the beginning of the trek that the next camp would be the coldest. Just how cold they meant, I realized when I was descending from Hampta Pass down into Spiti Valley.

The snowfall turned into a constant light drizzle, which made the steep descent more challenging. Every step had to be a careful and calculated one. Taking too long or too hurried steps could mean slipping and injuring yourself.

The barren and intimidating expanse of Spiti Valley in front was a stark contrast to the lush green Kullu Valley. Large boulders at the bottom of the valley indicated where once a glacier might have been. The valley still was prone to stone fall and we were advised to cross the area as quickly as possible.

On our way we had to cross long snow patches, one of which we decided to slide on! We could see our camps from the pass, but it still took us over 3 hours to reach the tents. By the time we reached our camp, we were exhausted, wet and cold. But we had done what we came for. We had completed the most difficult day of the trek: crossed Hampta Pass.

With tall peaks surrounding us, pitch black darkness all around, cold winds blowing and shaking the tents, it was the most appropriate setting to tell each other ghost stories! At night, most of us were too tired to stay up. But a few of us who had arrived early and had rested a bit, stayed up and told each other ghost stories.

They warned us how cold the camp site would be. But nobody mentioned how beautiful it would be.

Camp Sheagoru, and the sight of Hampta Pass 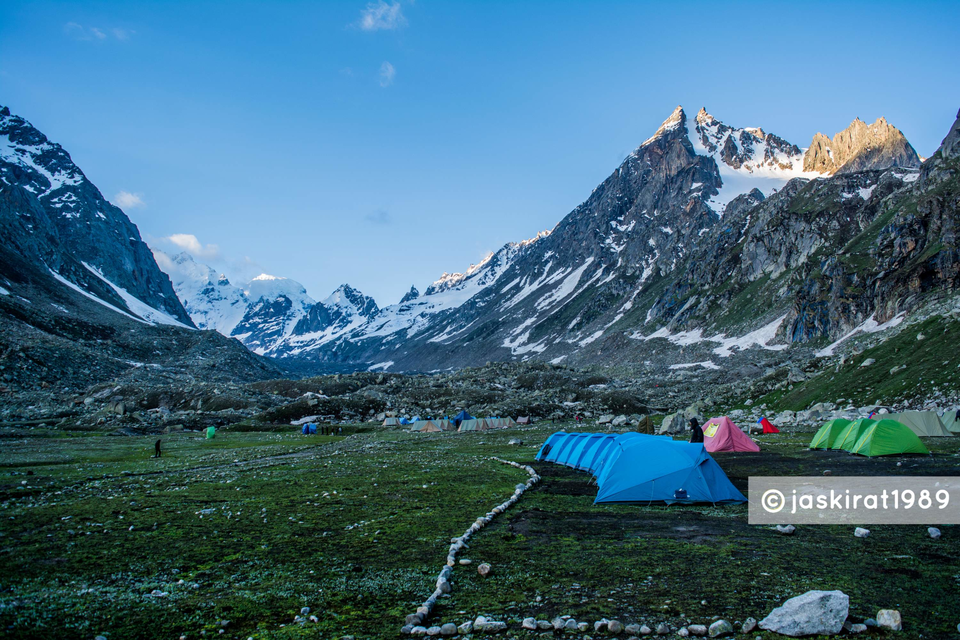 Surrounded on all sides by tall snow covered peaks, with a river flowing in the middle, the valley was breathtaking. You can clearly see Hampta Pass in the photo. A pass is a low lying area used as a route to cross a high range.

Right after we left the camp, we had to cross the river. One minute in the ice-cold water and we couldn't feel our legs!

The descent was steep but easier than what we had gone through in the last few days. The weather was clearer, with the sun shining throughout the day. Since the mountains block most of the rain on the Kullu side, Spiti valley receives much lesser rainfall and is a cold desert.

Sheep and Rams on the way 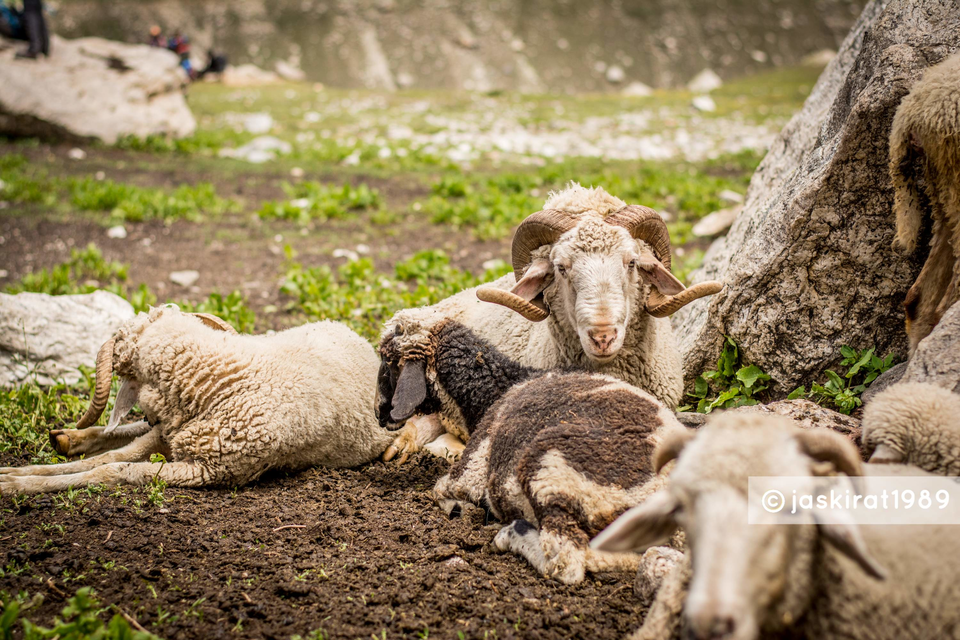 We descended down to Chhatru where we boarded cabs which took us to the last campsite at Chhatru. A hurried lunch, a change of clothes and then we were off to Chandrataal Lake. A 3 hour journey to the lake and just as long to come back. Just to stay at the lake for an hour or so... Was it worth it? Definitely! 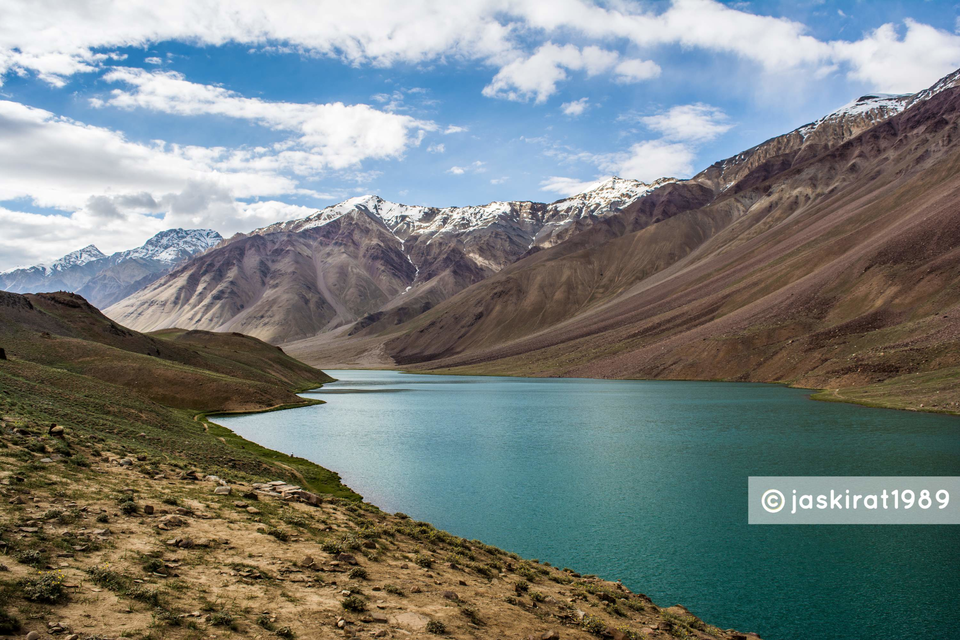 Nestled in the mountains, the emerald green lake was a sight to behold. Pictures don't do justice to this place. 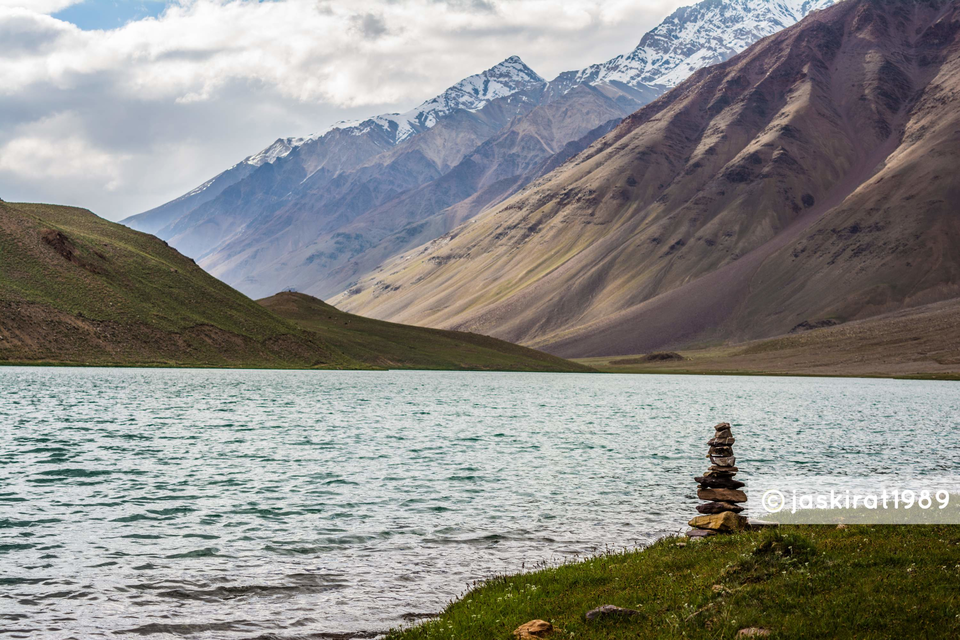 On our way back from the lake, we were all quiet in the van. Mostly listening to music, quietly reminiscing the last few days. The adventure had almost ended. At night, we celebrated at our campsite. That would be the last night together as a group.

The skies too opened up! And even though we had the moon there, I managed to get a decent milky way shot! 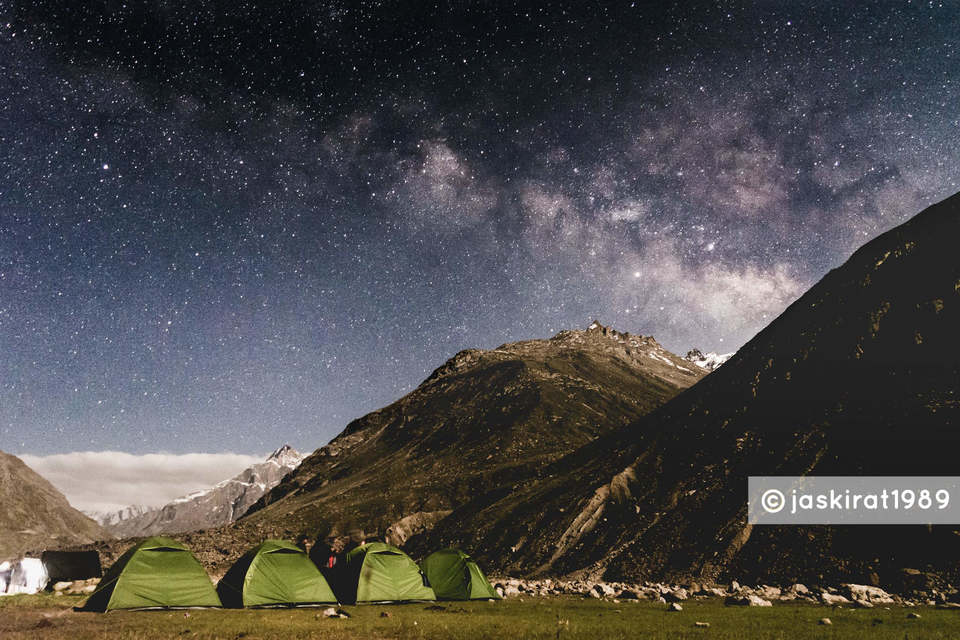 Day 5: Back to Manali

The last day of the trek is the journey back to Manali in the cabs. The route takes us through Rohtang Pass. Yet, after the adventure we had the last few days, the view from Rohtang just didn't seem as exciting now.

Crossing Rohtang, all of us got reception in our mobile phones, something we were living without for the last couple of days. We were back in our worlds, connected to families, friends and work. And the adventure had truly ended...