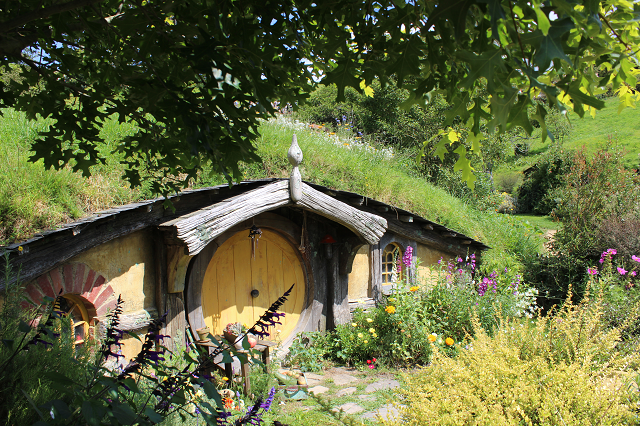 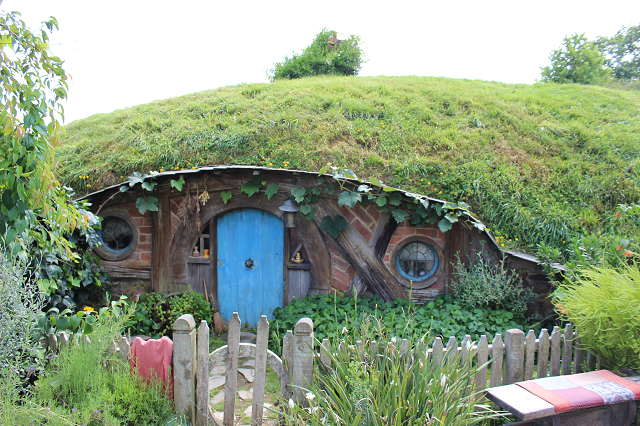 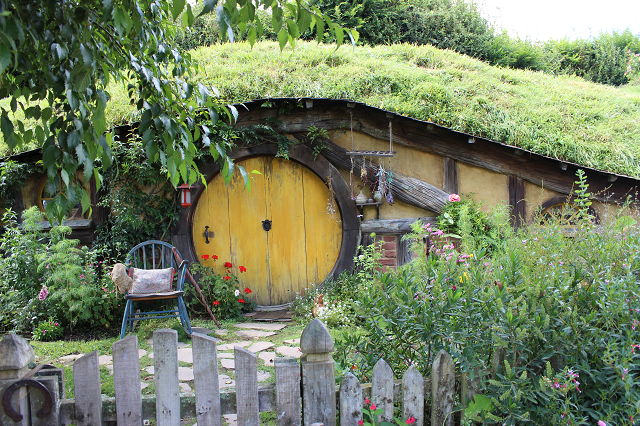 The famed trees of Hobbiton 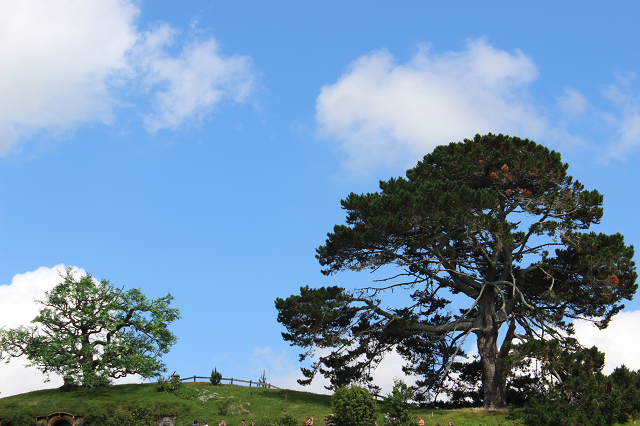 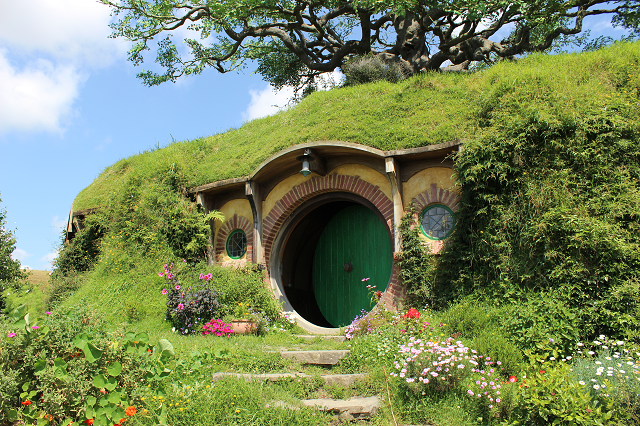 Enjoying ale and cider at the Green Dragon Inn 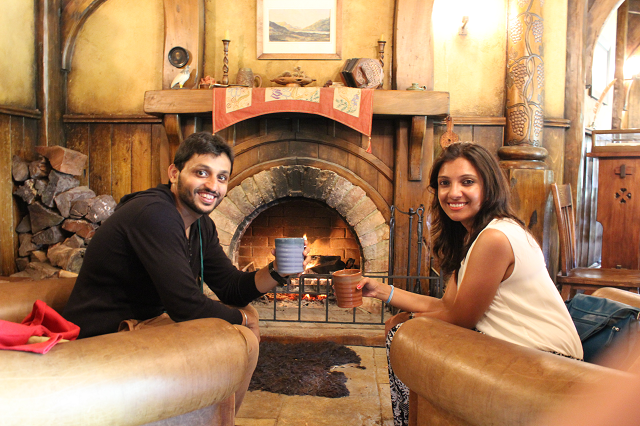 No admittance except on party business! 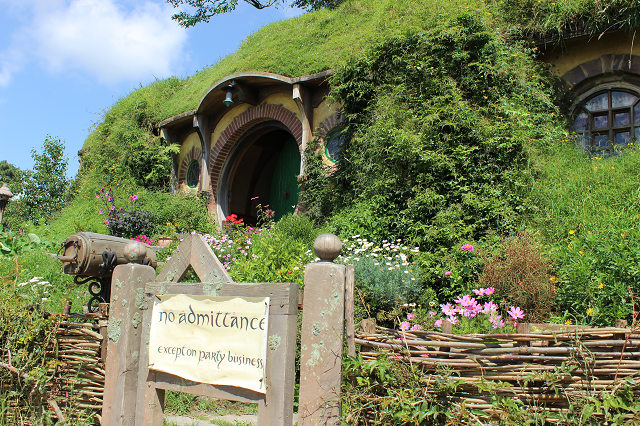 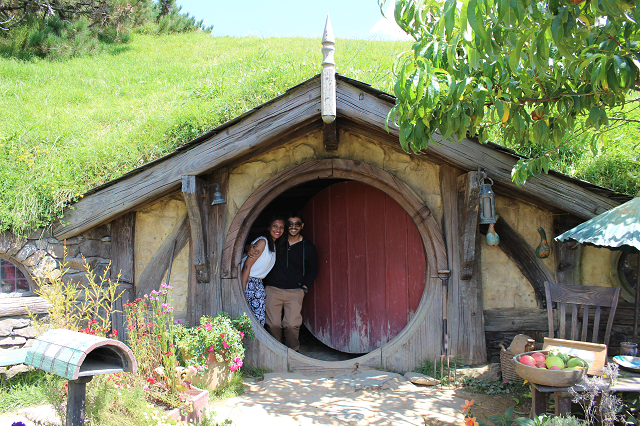 It was just another sleepy Saturday afternoon on the Alexander Farm in the Waikato region of New Zealand in the year 1998 when the fortunes of the family farm changed forever. For the next 15-odd years, the 14-acre lush dairy farming landscape became home to ‘Hobbiton’, one of the most iconic filming locations for six movies in the Lord of the Rings and Hobbit series.

Nestled at the foot of the verdant, forested hills of the Kaimai range in the heart of Waikato in New Zealand, Alexander farm is pure fantasy. It is no wonder why Sir Peter Jackson and his location scouts found the tranquil setting perfect for creating the sleepy and peaceful Shire. The shooting schedule for the movies began in late 1999 and organized tours commenced in 2002. The set was recreated with permanent materials in 2011 for the Hobbit movies and the current English Country vision of the farm is expected to last at least for the next half a century.

Alexander Farm is located in the town of Matamata which is 75 km from Rotorua and 177 km from Auckland. The visitor centre for the Alexander farm is located on Buckland Road just off State Highway 29 and it is the farthest that any private vehicle can go. The visitor centre is the beginning of the Hobbit magic and makes one’s imagination run wild. The place features a ticketing centre (which has a life-size statue of Gandalf in all his glory), a quaint Hobbit-inspired Shire’s Café with an authentic Kiwi Menu, and picturesque views of the countryside that one can stare at endlessly.

After purchasing tickets, tourists need to board 20-seater buses to visit the set as part of a tour. Each tour is accompanied by a tour guide. When we visited Hobbiton one sunny day in January 2015, the cute and enthusiastic Paul was our tour guide and regaled us to the hilt with stories about Hobbiton.

Hobbit-y things to see and do

Fantasy comes to life as one steps onto the grassy knolls of the Hobbiton Movie Set. The towering trees, 44 colourful Hobbit holes, an onsite bar and inn and a river flowing nearby will definitely draw ‘oohs’, ‘aahs’ and excited babbling, whether one is a fan or not!

Once you’re in Hobbiton, it is astounding to see how crowded the place can get! The walking tours follow a strict path covering all Hobbit holes before proceeding to the Green Dragon Inn. The distance between two consecutive tours is not much and sometimes tours end up right behind each other as they tour the many Hobbit holes in succession. So make sure that you’re not too close to the tour in the front or behind, or you’ll be clicking photos with people getting in the frame.

Our tour began with Paul guiding us to the signpost that read ‘Tuck Borough’ and ‘West Farthing’. A sense of excitement kicked in as we realized that we stood at the exact spot where a young Bilbo had screamed ‘I’m going on an adventure!’ As we made our way towards the first few Hobbit holes, Paul burst the first bubble – the holes were merely doors in the rolling knolls! Paul explained that only 2 hobbit holes – Bag End and one other – had been carved into the hillside, while the rest were merely doors propped up against the lush landscape! Don’t let this dampen your enthusiasm. Just stand in the tiny gardens or sit on the miniature bar stools in front of one of these ‘doors’, and you’ll experience intense exhilaration – and you’ll forget the fact that the Hobbit holes are props.

An interesting fact about the Hobbit holes is that all of them are different in size. Paul explained to us that this was to put things in perspective so as to show the difference in sizes between older and younger Hobbits, dwarves and tall wizards such as Gandalf. Another interesting story that Paul told us was that there was a small water body hindering the village setting, inhabited by a certain species of frogs native to the region. Sir Peter Jackson had a manmade water body built away from the set and had the frogs transferred to it so as to not to disturb the ecology of the farm.

The iconic Hobbit hole and home to Bilbo and Frodo Baggins, Bag End, is one of the last Hobbit holes on the tour. The thoughtfully-designed hole is located near the top of the hill, which had allowed Bilbo to have a view of the village and ‘run across’ the Shire in the movies. The signboard of ‘No admittance except on party business’ on the gate is taken quite seriously in real life as entry isn’t permitted beyond the gate! However, the one other Hobbit hole allowed people to stand just beyond the door and peep out, thus making one really feel as if they were living in the Shire.

In the wake of the glamour surrounding the Hobbit holes, little details that have been incorporated painstakingly often go quite unnoticed. Don’t miss out the cute little clotheslines outside some Hobbit holes, fake scarecrows in the middle of fake fields, vegetable patches (with real vegetables, mind you), lampposts, signboards, little wooden benches and even posters about missing persons!

As we passed the last Hobbit hole, a towering tree at the top of the tallest hill in Hobbiton caught our attention. As we marvelled at the way the trees roots and branches had been tended to, Paul burst the second bubble – the tree was fake! Paul explained that Sir Peter Jackson, director of the movies, wanted an imposing tree on the hillock to complete the picture-perfect Shire. However, after the tree was constructed, Sir Peter felt that the colour of the leaves on the tree didn’t match the plants around it. The leaves were spray painted individually until he thought the colour was perfect and the tree looked real. We were completely and truly amazed at the magnitude of the efforts taken to perfect the set.

We stood under the Party Tree for a long time, trying to imagine how the audience was seated during Bilbo’s speech and where Bilbo was standing when we slipped on the ring. After that, we made our way across a scenic ‘river’ where Paul burst yet another bubble – the ‘river’ was actually a still water body! However, it looked so perfectly like a river that the crew constructed a bridge across it to make it appear more like one.

The Green Dragon Inn was our last stop on the Hobbiton tour, and it seemed like the tour guys had saved the best for the last. As we stepped across the threshold of the Green Dragon, the whiff of delicious ale and beer clouded our noses. Paul our guide turned into Paul our bartender as he whipped up complimentary drinks for us. Sipping a cider and an ale, my husband and I occupied the comfortable sofa seats next to the hearth where a fire was merrily crackling away. I felt the warmth wash over me as the entire experience left me heady.

The details in and around the Green Dragon are sure to leave Lord of the Rings fans starry-eyed. The iconic poem-song of Misty Mountains that is hung on one of the walls of the inn beckons one to actually sing the song from the movies. There are also ‘Hobbit clothes’ hung on a peg that people can don and feel as if they actually are part of the Fellowship. Just outside the Green Dragon on the banks of the river, there’s even a picnic basket placed on the pier, as if left behind by a Hobbit enjoying a picnic lunch. As we stood outside the Green Dragon at the end of the tour, we felt complete – as if a longing within us was fulfilled. It was at that time that we actually felt what the Hobbits felt when they were leaving for the adventure – the Shire is a safe, comfortable place; a foothold to fall back on.

We began walking towards the bus station as Paul told us a fascinating fact – 50% of the people who visit Hobbiton haven’t seen the movies or read the books. At the end of the tour, they went back as hard core fans, excited to explore the world of Lord of the Rings. As we boarded the bus and made our way back to the visitor site, Paul mostly ended up answering questions about where to apply to become a tour guide for Hobbiton!

Usually, the addition of Hobbiton to the itinerary increases stay in Rotorua by one day, since the other day is spent in seeing sights in and around Rotorua. Although we weren’t advised against it, many people suggested that we were better off spending that extra day someplace else or knocking it off the itinerary. However, visiting Hobbiton is like living your fantasy that has been brought to life. One doesn’t know what to expect, and the actuality of seeing it all leaves one in awe. Also, one has no idea of how big the farm actually is, and the painstaking detail and attention given to aspects while making a movie blows one’s mind away.

Spell-binding tales and a bucolic, tranquil setting make this slice of Middle Earth on earth a delight to visit.

Organized tours begin at the Matamata i-Site, Rotorua, and at the Shire’s Rest just off Buckland Road, where the farm is located. Tour prices from the Matamata i-Site and the Shire’s Rest are $75 for adults, $37.5 for youth (10-14 years) and $10 for children. Tour prices from Rotorua are $100 for adults, $72.5 for youth, $45 for children, and $35 for infants (0-4 years). New evening dinner tours have recently been added as part of the experience every Wednesday which cost $190 for adults, $150 for youth, and $100 for children. Proper walking shoes are recommended since it’s a two-hour walking tour.

The onscreen wizardry in the Lord of the Rings and Hobbit trilogies may have caught the fancy of millions, but Hobbiton is ground zero, where the magic really happens.