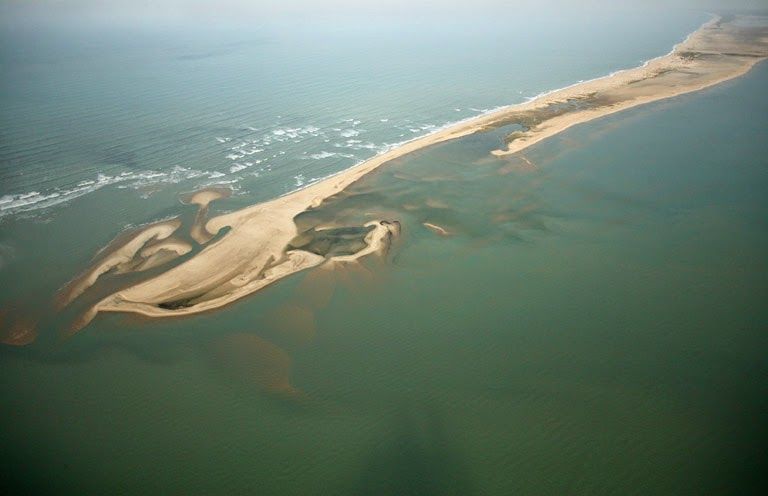 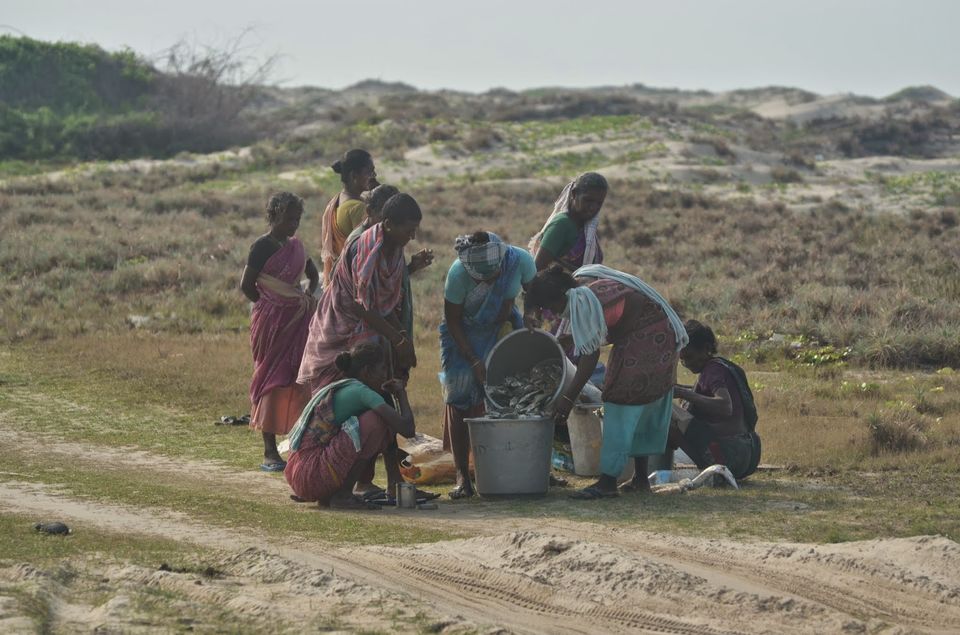 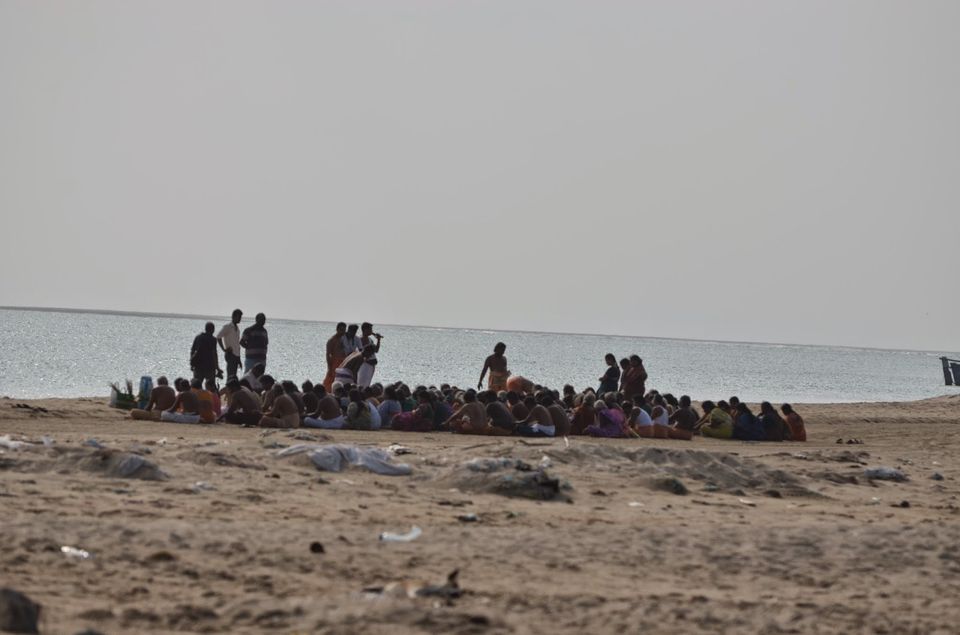 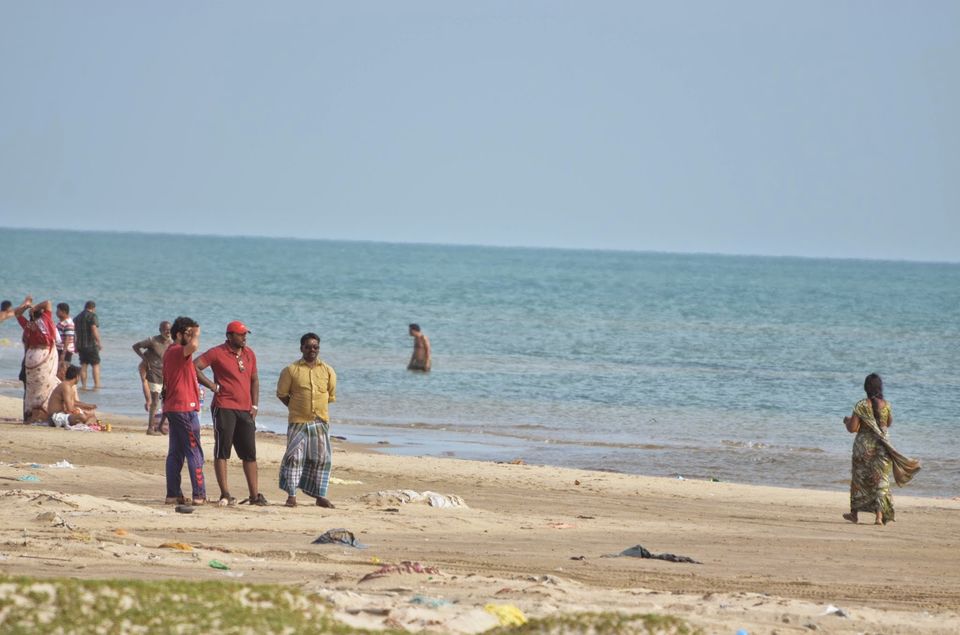 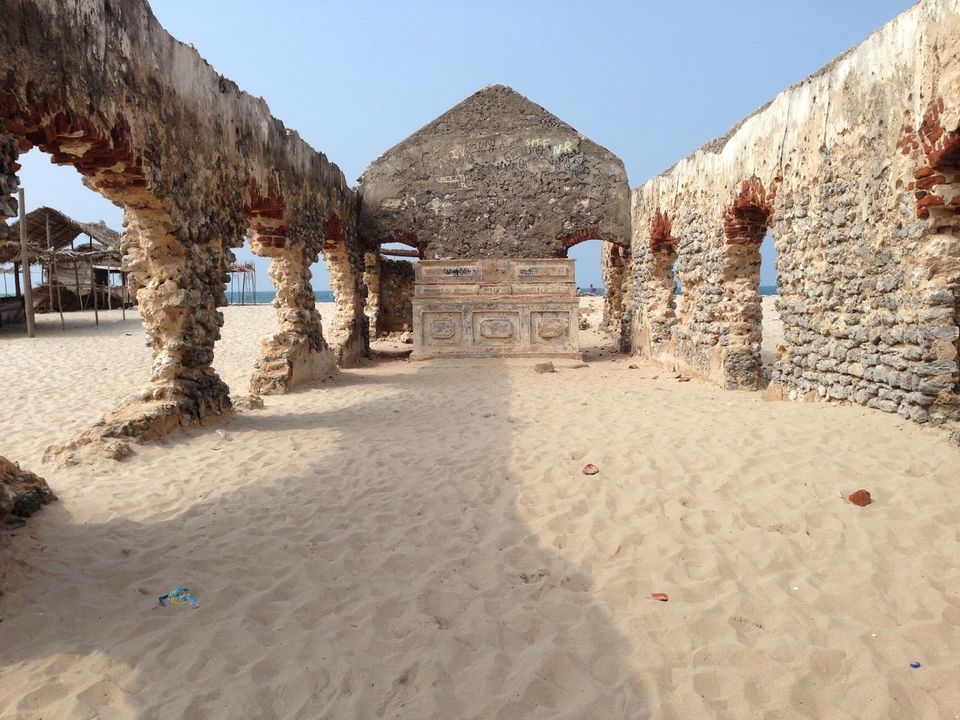 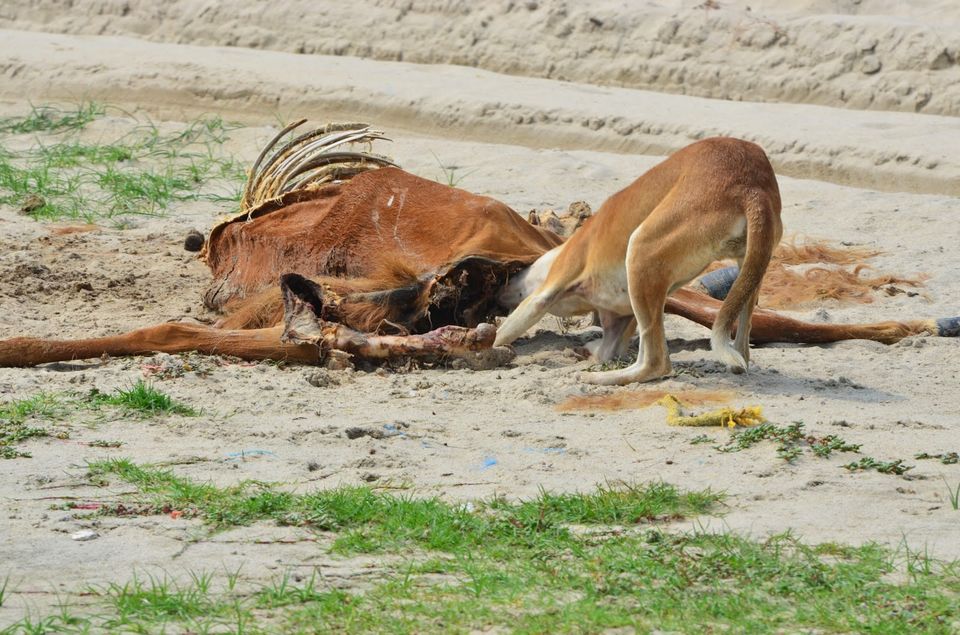 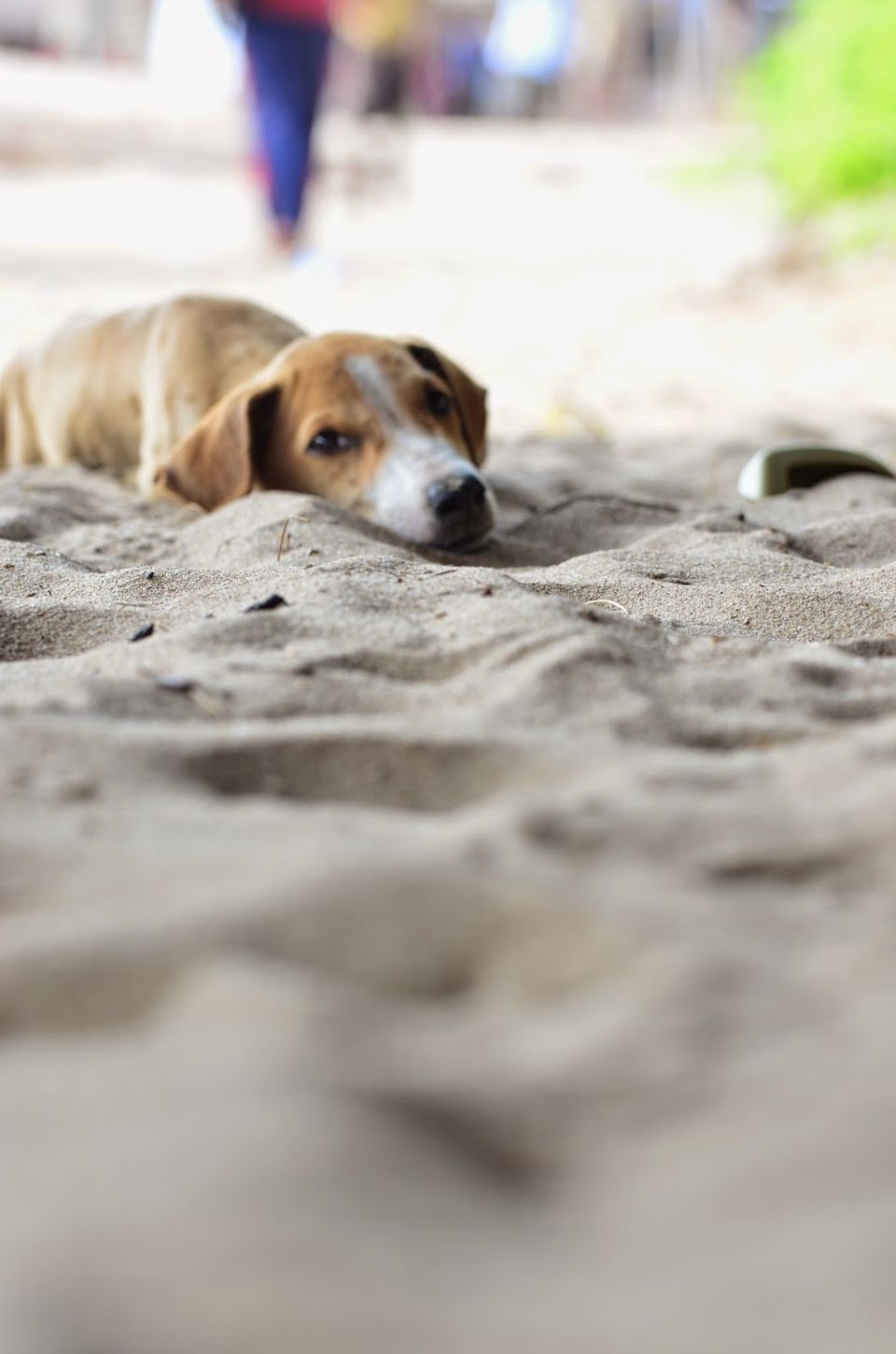 We reached Dhanushkodi in a tempo van. That was the place which I have always dreamt of. A beach with pure white sand, greenish-blue water and Partial cloudy blue sky was always my dream. In fact most of the people have this dream and I call this ride a “Dream come true”.

Anyone ever seen a market with no roofs, no bargaining, no rate discussions and no hustle and bustle, yes this happens in Dhanushkodi. They just come with a boat full of fishes, divide it and will take it.There where no big crowd for making those noise which usualy happens in a market, I should say the town was no more stable to hold such a crowd, still people gather there to feed the immortal souls. Naval base was haulting at the tip of that land when we reached there.

Driver who took us to the tip in tempo warned us not to go to tip since navy executives have the right to encounter if they feel any bad vibes. apparently we were hardly normal to clinch up there and recur. We just took the help of sand dunes to tuck away ourself creeping to the tip of the land. Staring at the near by land (Sri Lanka) from the tip of that land is such a great feeling the you will never forget in your whole wide life. If you will take few cups of wikipedia before going to Dhanushkodi, a lot of random thoughts will haunt your mind which makes you valiant about the trip and makes the ride worth . Our driver started jeering at us from distance. We decided to go near him just to keep him away from tensions, He was annoyed and we were expecting a slap literally :-p. But we talked and dragged him back to mood.

The next place was Dhanushkodi town which was washed off and completely destroyed in 1964 cyclone, Place  filled with uncompleted dreams and screaming sounds. This won’t liberates you or entertain you. But here you are going to realise how worth is each and every breath of yours. We were on the way, through the Sanddunes emerged with water. Driver showed us the railway track which was stretching towards the sea, that was the track where train caring 108 children were washed off to sea and after 2 days the bodies were found out from the sea. Near to that there was a road which was guiding towards the sea it was also the same. This get's through one’s head that "we are just a drop of water which happen to take birth from clouds and ends over ground, the travel from clouds to ground we can take it as life between that even a small vibe of wind can torn us apart".

We reached Dhanushkodi town and I first saw a railway station and Church which was destroyed in that cyclone. I walked through the side ways of railway station and I headed to the church. Railway station was crowded with people which I hates the most, not the people, the crowd. The basic built of the church is still backed. I went inside and started to feel the place, I was able to hark the chanting of people’s prayers. The stillness between the walls and the sound of the serene waves from Bay of bengal bulged me to that mind place where I can visualise everything which I had read in wiki about the town once existed . I just closed my eyes and I can hear the sound of chorus singing, marriages, children playing around, parents scolding. From there I decided to get detached from the group and walk alone to next Building which was old Police station.

I went to the old police station, walls in heights and Zero crowded. Its scary, believe me. People who stays there(in small huts) say's that at night they can hear girls screaming. Still I just want to take a chance and give it a try, sitting at the top of the building alone. Sand dunes took me to the top and I sat there. That was such a hell of a solitude feeling. Now I know what it feels for those people who getting enlightened. I took a panorama from there just to take a peek sometime when I need it badly, even these snaps brings peace to me. I don’t know to explain it more, its beyond words and some feelings can never be explained as it is.

Between I saw a dog starving since days and he was getting ready for the death call. I guess that would have passed away by now. Dogs eat horses in Dhanushkodi and that how the food cycle works there, Horses eat small dry grasses. Its weird to read but its more woeful witnessing it directly. But Infact its how dogs survive there in Dhanushkodi. Pony's are running here and there, unknowingly hunters are waiting to kill them for food.

We where getting late and Sandeep my pillion, came and called me. I jumped off from the building. Luckily I was not hurt, thickness of sand got me in hold. We all headed back to the gathering point where our bikes were parked. We paid the fee to driver and we took the bike. Raghu and jyothi started the bike and went to Rameswaram before us.

We started bike, went a 100m and a monster biking shop was there so I stopped just to ask the rate of monster biking through the sand. After that when I tried to start the bike, it was not getting triggered. Here we go, again we are left alone. We looked at each other and laughed, words untold "Insane things happens to Insane people". We were starving from morning and we were having 100 Rs hardly. No work shops, no petrol pump, no phones and no money. It was our time and we were having it in full swing. People gathered and everybody tried in their ways to start the bike, unfortunately everyone vanished knowing its not going to happen.

I told him that we will sit for some time and will wait for Raghu and Jyothi to come back. Since its Jyothis bike I thought he can handle it. We waited for around 30 min and sandeep was cuddling up with his SLR. I was just sitting there and counting the waves which I always love to do. I saw Sandeep was meditating in between with his eyes closed. I didnt took it seriously. Suddenly he asked for the bike key's, I gave him and he left me. He went near to bike and again started kicking. After 10 min I felt bad watching him like that under the hot showing off sun, I took my bag and was walking towards him. Suddenly bike got started. It was like a miracle. I asked him what he did and his answer made me meh. He replied me that he was meditating and he got an intuition that it will start, still I believe him because I have read Alchemist so I have a little belief in what he said. Anyways our problem was solved and we started hitting back to Rameswaram. We reached our room and started sleeping draining off all our tiredness. There we put an end to our dream come true and it filled us all with solitude and peace.

This trip was originally published on the blog Life Improvised, by Sreedev.