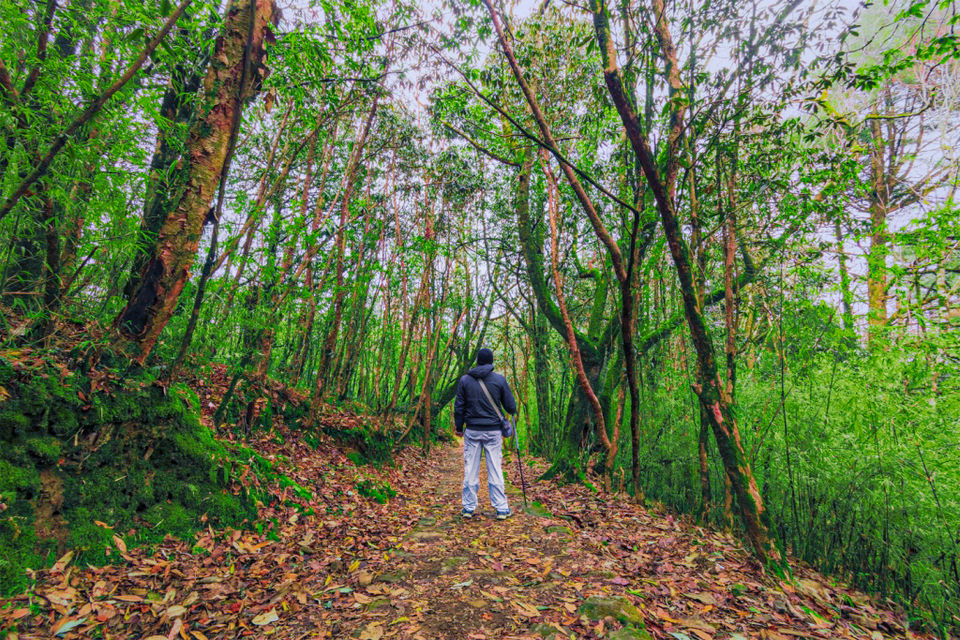 Lets make a very abrupt beginning to this blog. It took us just a couple of mins to decide and get the tickets to NJP, around mid-October last year. Also, it took us just another couple of mins to decide where we will be going after reaching NJP – the difference is that we decided where to go in 2 mins after reaching NJP station! We? Mangalik, a doctor, mountaineer and my best friend and myself.

A Little about Dhotrey: Its a small village in Singalila Mountain range, near Nepal border and a part of the famous Sandakphu trek. It is famous for rhododendrons and as a place to stay before Tonglu trek. Nothing much about it but is it so? Let’s begin.

Padatik Express from Sealdah to NJP. Light dinner and sleeper coaches with the checker coming late, its always a mixed experience on this train. Good night and hoping to wake up to a productive morning, because we didn’t know where we were headed.

We decided where to go while crossing the flyover of NJP station, and our plan was to get it done within a budget of 4k bucks. At around 10, we took a small cab to Darjeeling More @ 30/- per head and then got a share car which travels upto Rimbik. Not much to define in the journey, just stopping a few times, once at Mirik and once at Pashupati Market. We reached Dhotrey around 4pm. The place that we chose to spend the next two nights was Sunrise Homestay, a very new one with beautiful rooms and no placards or posters yet. We got served Veg momos since it was a festival day there, hence, no non-veg. After the light meal, we began our main journey. First stop by walking was the Dhotrey Medicinal Plant Sanctuary which was nothing less than a dense forest with beautiful pathways, and every turn here was reminding us of “Yellow Wood” from The Road Not Taken. A few photographs and successful trial to get network to inform at home that we have reached, we returned to our homestay, clicked some more and then off to bed with Nepalese style dinner (brilliant it was!).

Decided previous night, we got ready for the Tonglu trek. A one way 5km trek, crossing three mountains, half covered in lush green forests and half in dried leaves indicating fall and some its-and-bits of snow, we reached the top of Tonglu, from where they start for Sandakphu. We planned to get down since we didn’t have time (it was a 3 day trip). We met some mountain goats and a dog on a dried pond. We were kinda sad to see nothing of the view we had thought of and we got back soon. Lunch was similar to last day’s dinner, only having egg today, since festival was over. After lunch, around 4 pm, we were too tired to go out.

Then came the most magical part of our trip, I had hoped to get clear skies and had booked the tickets during new moon. However, the first night was pretty disappointing, full of clouds. This night, after 22 chicken momos per head, we were about to go to sleep with a faint hope of getting to see Mt. Kanchenjungha the next day, I gave a glance at the sky and could see quite a few stars from our balcony. At -2°C, I rushed to the roof with my camera gear and Mangalik followed suit with the room keys. And I had seen one of the most majestic views in my life. The sky was glittering with stars and the Milky Way was crystal clear. We could also capture the Orion Nebula and many more stars and our hope was getting better for the view of the majestic mountain range. We finally dreamt of some good stuffs.

Morning at 5, we woke up, temperature was freezing but we made our way to the View Point, via the temple and YES, we were not disappointed the second time. We could see the legendary mountain standing right in front of us, about 50km away in its best grandeur. Mt. Kanchenjungha and many more peaks of the Sleeping Buddha Range were visible. We finally said to ourselves, The Best for the Last. Car was waiting for us at Dhotrey, we took it and returned in the same way as we had gone, and since we were returning home, a heavy meal before boarding Darjeeling Mail from NJP late at night.

Oh, total amount spent was only ₹3760/- per head. We had done it within 4k, as promised to ourselves.

Brilliant as always, this trip will be etched in my mind for the Milky Way, the Rhododendrons and Mt. Kanchenjungha, all in one trip.