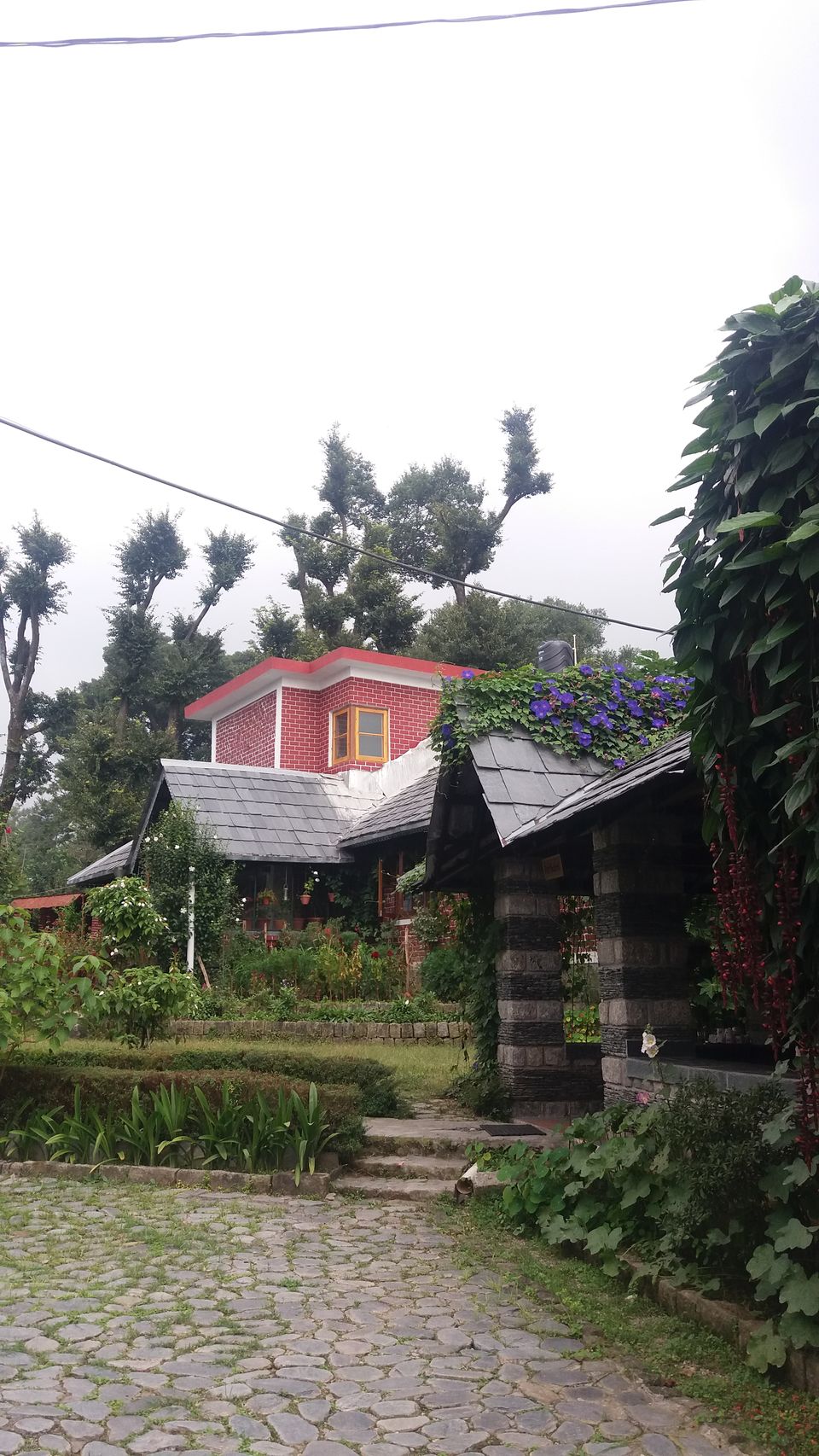 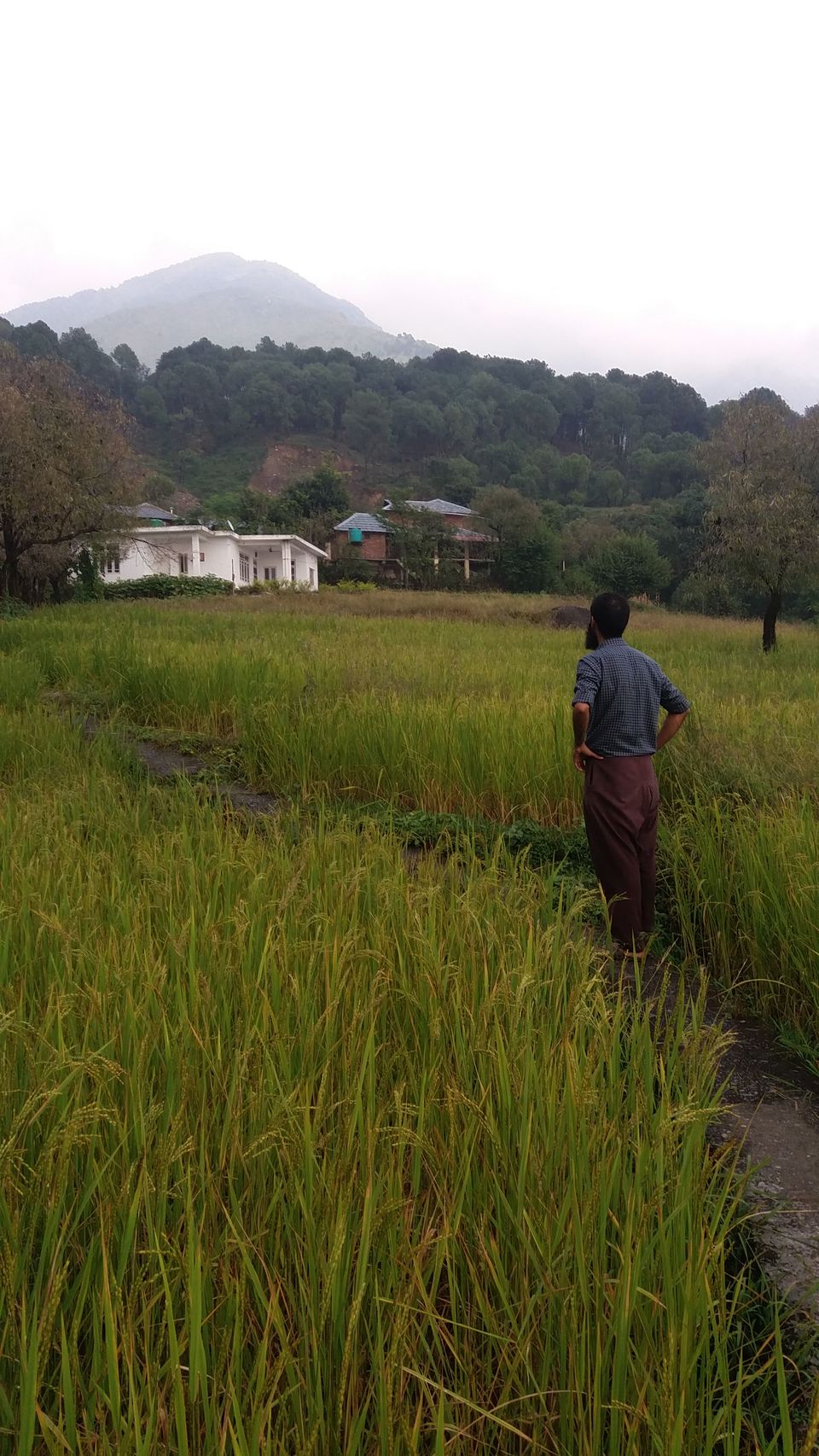 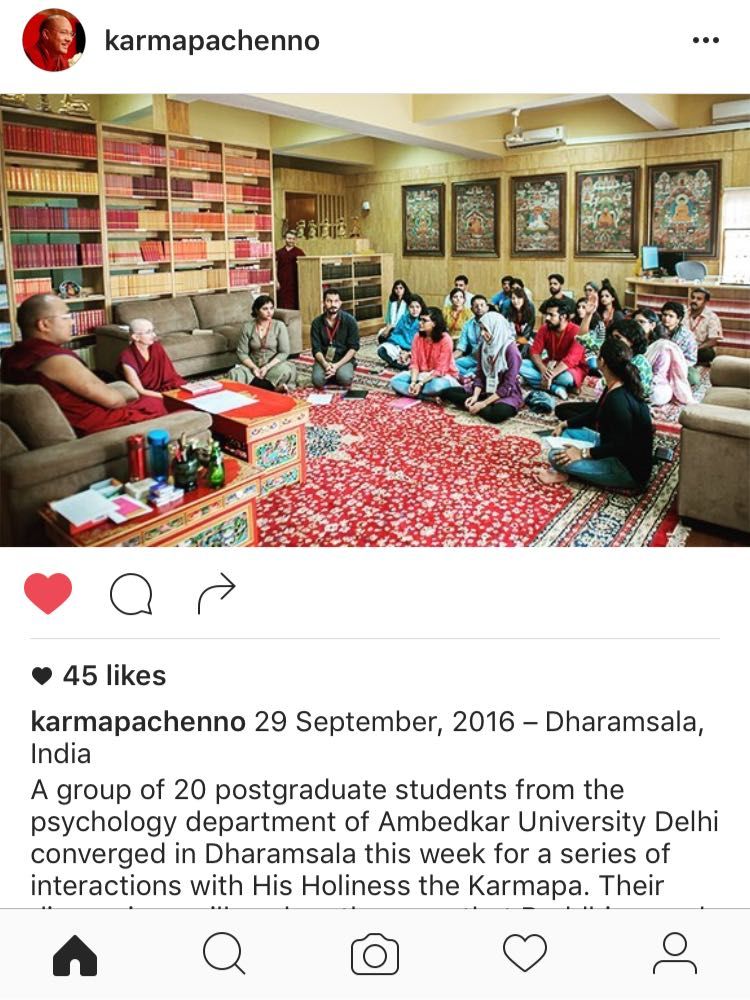 This past September, twenty students and alumni of Ambedkar University Delhi hauled themselves into a Volvo along with two faculty and a nun to head to Dharamshala. We were to meet with the 17th Karmapa over ten days and discuss sets of emotions with him. These were — faith and hope; envy, jealousy and greed, shame and guilt, etc.

The ride up was smooth enough, with two breaks in between — one for dinner and one for morning tea. We stopped at the typically named Vaishno Dhaba in the hours just before dawn. I brought out my bidis and ordered a tea, which was just-sweet-enough, strong and spiced.

A few hours later we were in Lower Dharamshala where ten white hatchback cabs were waiting to take us to our residence for the coming week. Jagori is an NGO that does trainings geared towards women’s empowerment. They also rent out their facilities to large groups such as ours. We were housed in cottages with beds inside — I bunked with a junior and a batchmate.

The NGO is beautifully built, all flat grey stone and red brick with bunches of flowers dropping over the verandahs. Our meals could be timed with an Army man’s clock. The bell would go off and we would troop to the dining room for bread, eggs and fruit or roti sabzi or chawal daal and dessert.

We had three-four sessions a day — rounds of presentation, feedback, question generation, one upon the other with breaks for meals or tea. In the afternoon we took the white cabs down to Gyuto Monastery to meet the incredibly handsome Karmapa whose birth name is Appo Ga Ga (Brother Happy Happy).

Gyuto Monastery is primarily yellow and gold. As you enter you cross the residences of the monks and nuns on your left. As you face the front entrance, a small school for children is on the left. The Karmapa’s office is in the back, behind the main hall.

We would sit in the waiting room, be called in, go through security and wait outside his personal library until summoned. Three students would then present for around 20 minutes, then he would take ten questions for the next hour fifteen minutes. In between, junior monks would bring us all inexplicably hot water. In the air conditioned room, this was surprisingly welcome hydration.

We would then collect our bags and phones, stop in the tiny market for snacks and a drink and wend our way back to Jagori, for tea and reflections on the session. We went around in round robin format, i.e. one would speak while everyone listened. This was tedious and testing. I passed the time by fiddling with my phone — switching between Twitter, Facebook, OkCupid and the like.

After three days of this we were glad to have a little break on Saturday to go McLeodganj. I rode up with two friends who had bikes. We arrived a little late, to find our party finishing their thukpas at Tibetan Kitchen. We quickly ordered some lamb and vegetarian cheese curry — to find that the names of the dishes were far more appetizing than the food.

An attempt was made to go Bagsu falls, but quickly thwarted by the rapidly falling rain. So a friend and I sat at the Clay Oven Café while the bikers made their plastic enabled bid to check the falls out. We had a mocha and a cappuccino each, and shared their chocolate pastry which was too home-made for my taste. The boys arrived, we each took a nap and then ventured out into the lightening drizzle where we met some of our friends. We exchanged some notes and then ventured down the road, buying things for ourselves and friends. I bought a dream catcher for a friend and bergamot oil for myself, and also a bottle of very dry peach wine.

We stopped at the Four Seasons on the way back, which strangely enough only serves chicken. I had a traditional Tibetan dish, and my friends had some pizza. Food done, we hurried back and I peeled off to meet my friend.

He lives in Rakkar village, where Jagori is, except higher up the mountain. His is a mud plastered house with two and half rooms, a bathroom and kitchen. And also a black and white dog called Momo. We sat around, drank the peach wine, played some music, smoked bidis and soon it was time to bed and call in another day in the mountains.

Like this, our time passed, punctuated by warnings to not squish the snails, some wisdom gleaned in interactions with the Karmapa, and the many tears of my triggered compatriots.

So while my cohort spent the last day in Norbulinka on a farewell lunch, I sat with my friend and his dog Momo. I meant to drink Rhodendron wine but instead we went to Bakes and Brews, had coffee, some amazing chocolate cookies and a dessert each. Then I took a much needed nap at his place and then a cab to the bus station.

The bus ride back was eventful only because the driver appeared to enjoy scaring the pants off of his customers as well as the general public on the roads. He would swerve into and away from tempos, cars, bikes without warning and with shrill braking.

So I was very glad when I woke up to him yelling ‘Dhaula Kuan’ at five in the morning. By six thirty I was at my friend’s house, ready for chai and solid sleep.