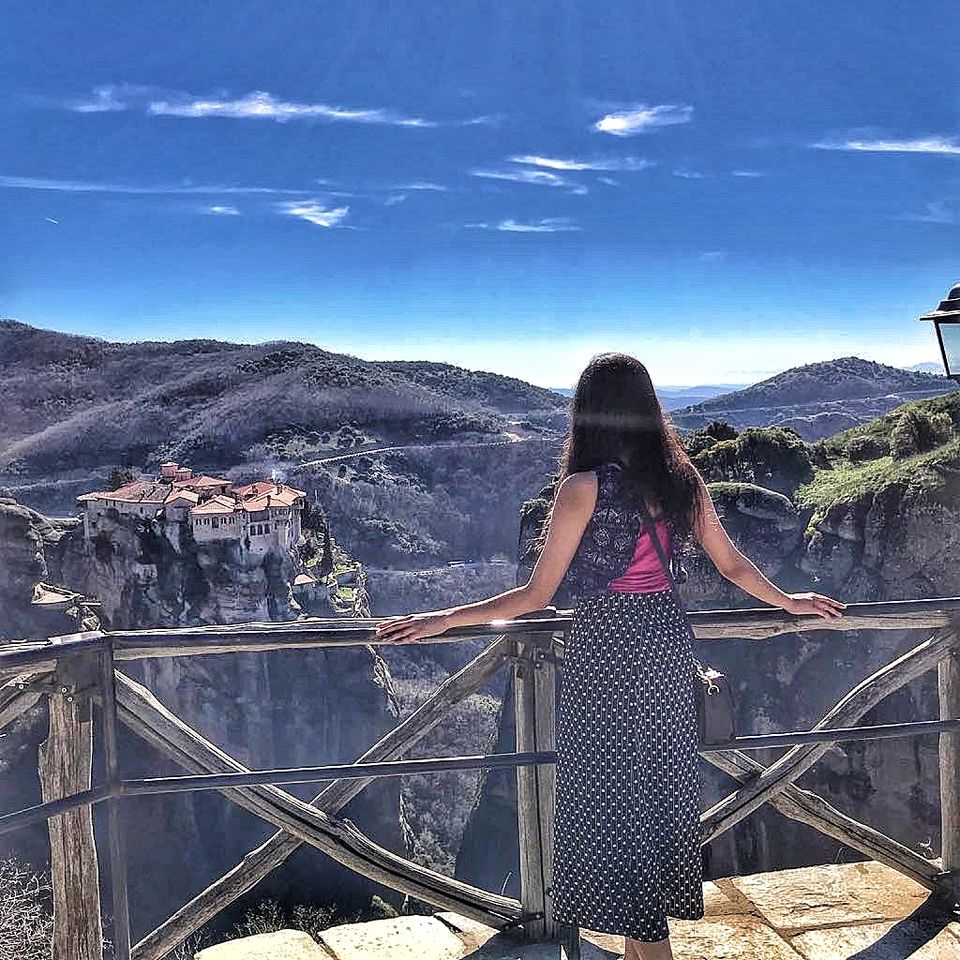 For those of you who regularly read my blog-posts must know by now that I have spent the past 2 years of my student life scuttling between European countries. But now that I have found comfort in my full-time career as an engineer, I plan to revisit countries which I believe deserved more of my time. Greece surely topped this list as I barely spent a couple days in the capital last time. Also I had a pending visit to offer my thanks in person to the Greek Gods for not letting me die of hunger after I fell victim to a pick-pocket during my first visit.

If you too wish to seek out the abode of the Greek Gods, I hope you find my itinerary useful.

Millions of years ago, 2 Greek rivers met to form a delta in a region of Central Greece. With the passing of time, the materials they transported formed a solid settlement underwater. But with tectonic movements, the sea bed rose to cause soil erosion. This shaped the bed into massive rocky pillars and the rivers too, changed their course. The few locals who inhabited the two villages at the foothills of these massive rocks naturally learnt the art of rock climbing and even passed on their skills to the monks who came by to build monasteries here. So by the end of 6th century, 25 monasteries stood on top of these rocks in an era, when technology was bleak.

Materials were transported with the pulley system. The monks learnt to chisel paths on the face of these rocks. They would fix the wood in the niches and pull themselves up with a rope. The trick was to reach the top and remove their make-shift ladder, so no one else could gain entry into their retreats. With wars being fought and bandits and dacoits looting, the area offered much safety to the monks who merely wished to lead a life of solitude and isolate themselves from human intervention. 'METEORA' in Greek literally means 'suspended in air'. The region got its name from a monk when clouds engulfed the rocks completely on a certain wintry day, exposing only their tops and the monasteries :)

After arriving in Athens, it was a bus ride into the land of monasteries. (It is possible to take the train as well, but there are delays usually).

Kalambaka and Kastraki are the two villages at the foothills of Meteora and it is easy to walk between them. While Kalambaka is a central hub, Kastraki is great for nature lovers. So I booked my stay in Kastraki. After checking in, I left for the 'SUNSET TOUR' by VISIT METEORA (https://www.visitmeteora.travel/). Due to the constraint on time, I wasn't sure of being able to find all the 'viewpoints' myself. So I decided to take tours to the monasteries and learn a little about the history of the place too!

A monk walking down the streets of Kalambaka 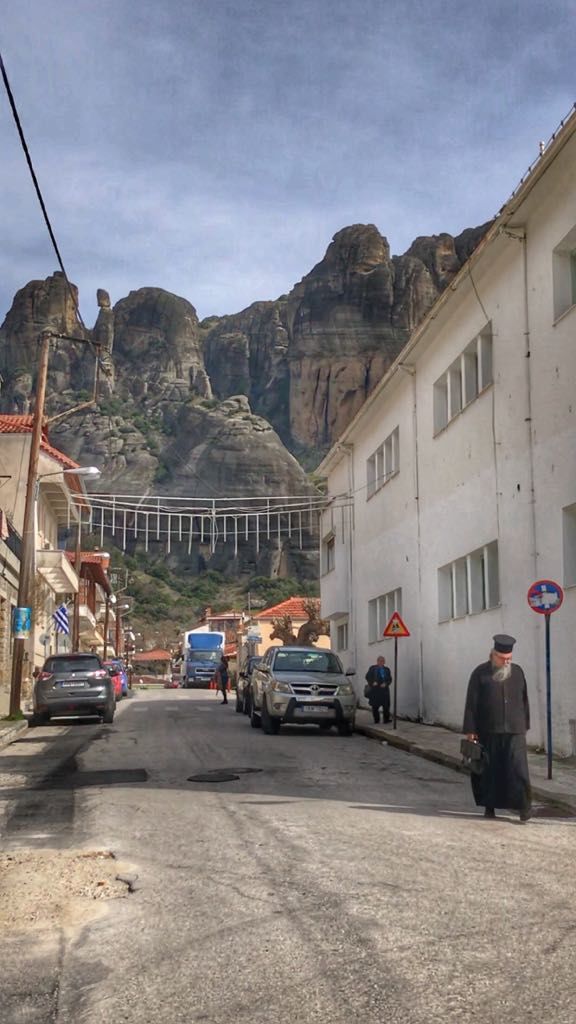 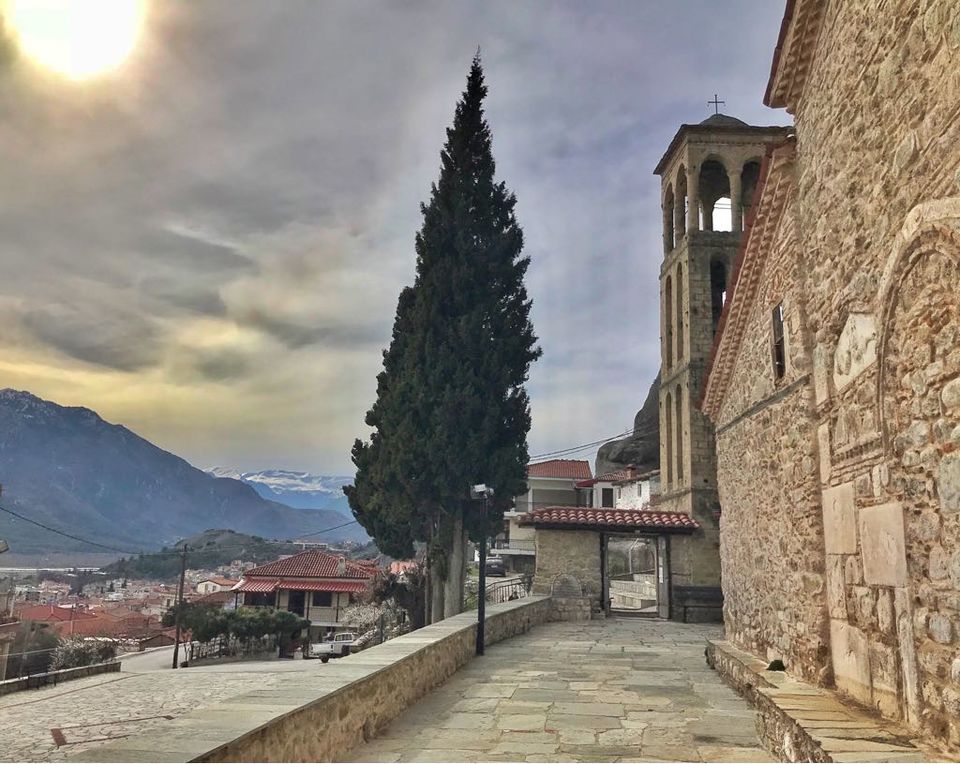 While a visit to the monasteries is exciting, there is a lot to learn about the history of the two villages itself. So the tours usually stop at the oldest church here. 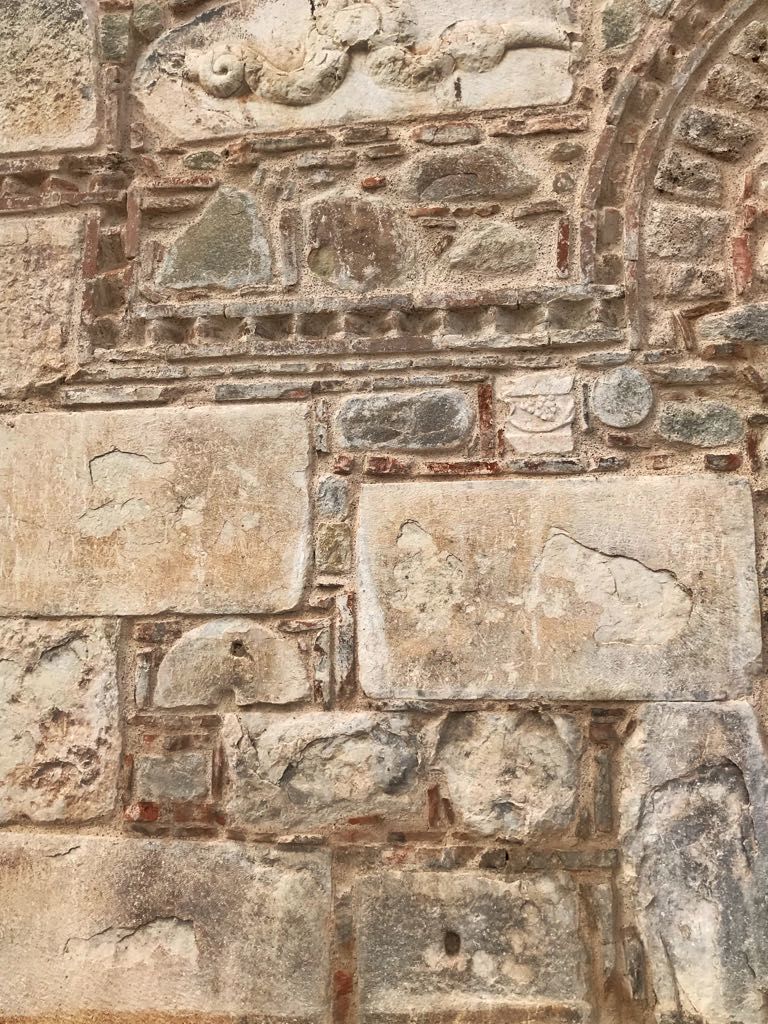 FACTS: This is the longest standing monument in Meteora. One that has been revived by the locals through centuries. Built in the 4th century over ruins of an ancient Apollo temple which was found here, this one withstood three major invasions-The Roman, The Ottoman and the Nazi fire-which burnt almost the entire village except this church. Now whether it is by sheer luck or by the touch of supreme power is a thing to contemplate. I do have strong faith in the Almighty and having learnt that the church walls are still embedded with marble that belonged to the ruins of the Apollo temple found here, I do believe that some form of supernatural power resides at the site. This was also one of the ways the locals preserved things of the past. Renovations were made every now and then, but a few features from previous centuries were always retained.

To add to all the stories you hear are views of the Pindus mountain ranges from the Verandah of the church. Also the biggest rock in Meteora, 'Aiyya' rises directly above the portico. All rocks in Meteora have names :) What a perfect blend for a history-buff/nature-lover like me!

MONASTERY OF AGIOS STEFANOS (AGAIN CANT LOCATE-You see why you should take the tour :P)

With that jaw dropping landscape in the backdrop, this one is a stunner. The monastery is known for being one of the 2 that admit nuns after an incident that occurred in the 1950s. 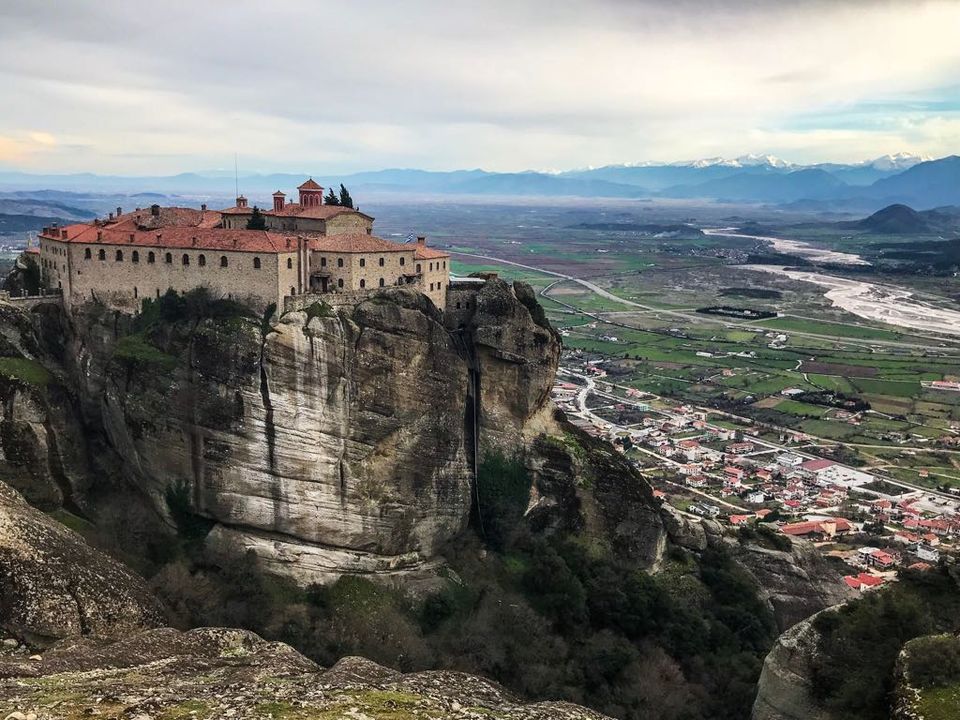 FACTS: Women were not allowed to enter these monasteries until the 1950's. But on a fine afternoon, while the men in the nearby villages were off to the fields, the Varlaam monastery caught fie. It was then the women who took timely notice of the chaos and rushed to offer help. So the monks had to open their doors to save their retreat. I truly believe that these events may be signs of how justly the Almighty loves all his creations! :)

CHASING PANORAMIC VIEWS AND THE SUNSET 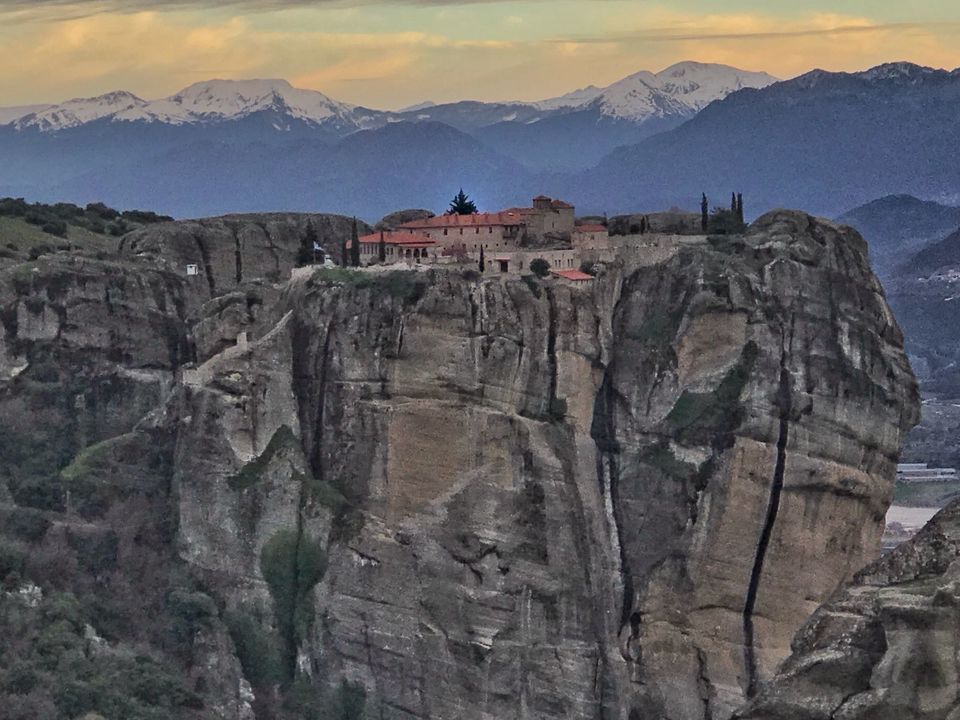 The sun setting over the rocks of Meteora 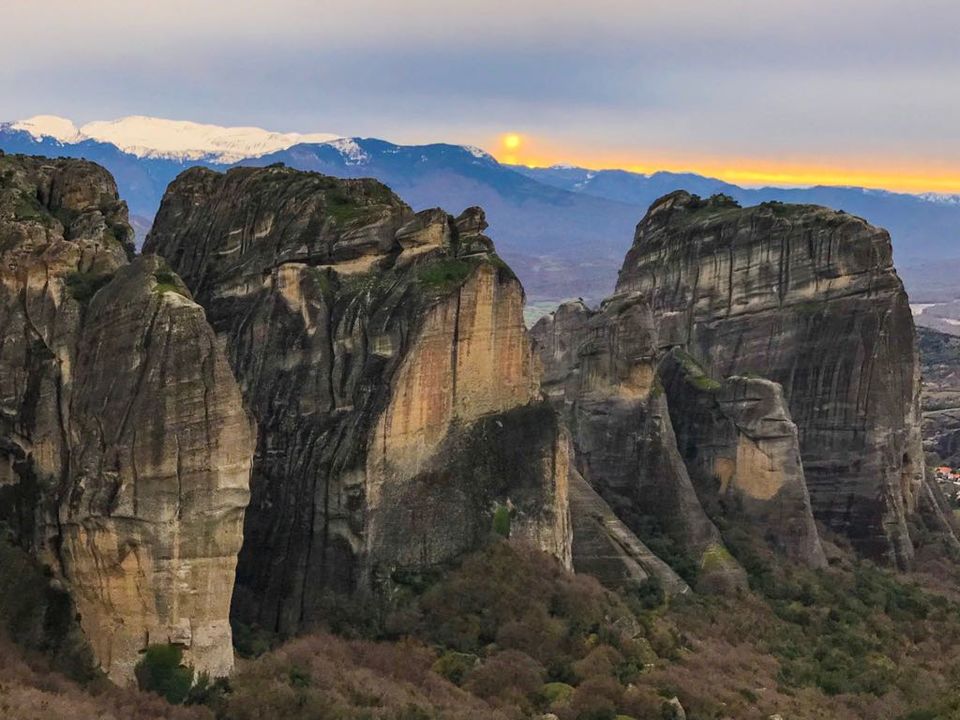 On the tour, I bumped into Phillipe from Estonia and we instantly got along. So we decided to grab some dinner at a Greek restaurant. I have met amazing people on both tours and self-guided getaways. Some tours are really worth it and this, was surely one of them! :) 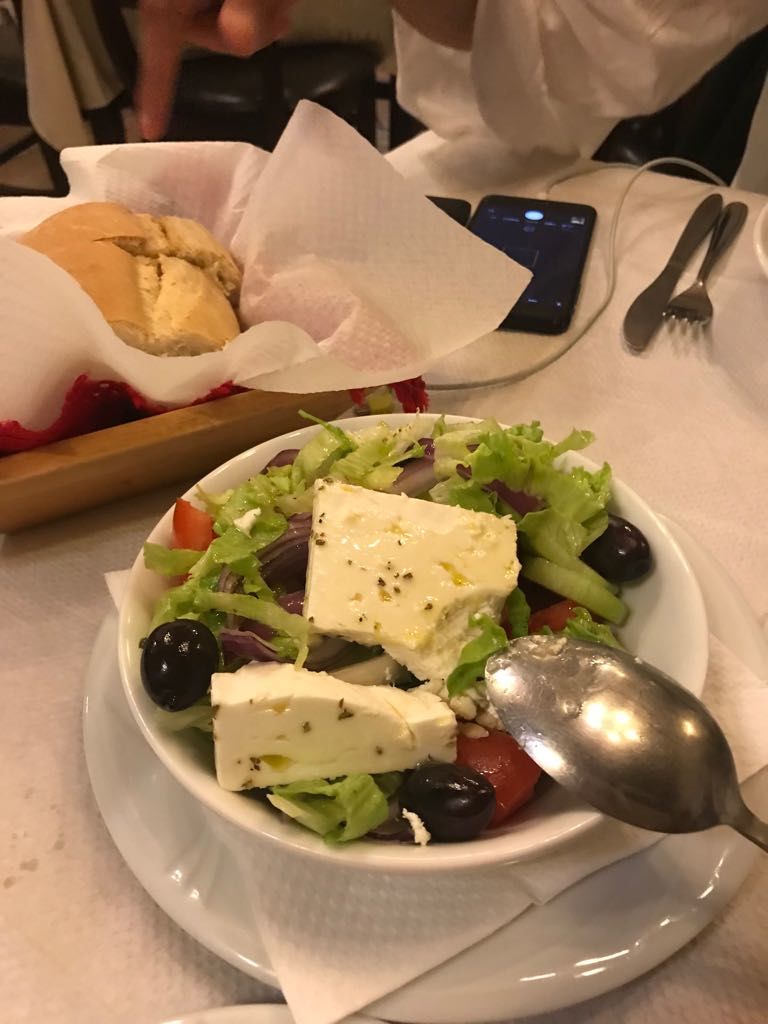 I started my morning with a walk in the village of Kastraki. The early birds, the rising sun, the glowing mountains and the distant church bells clanging in one of the monasteries were my only companions. This one surely makes it to my list of favourite morning walks! 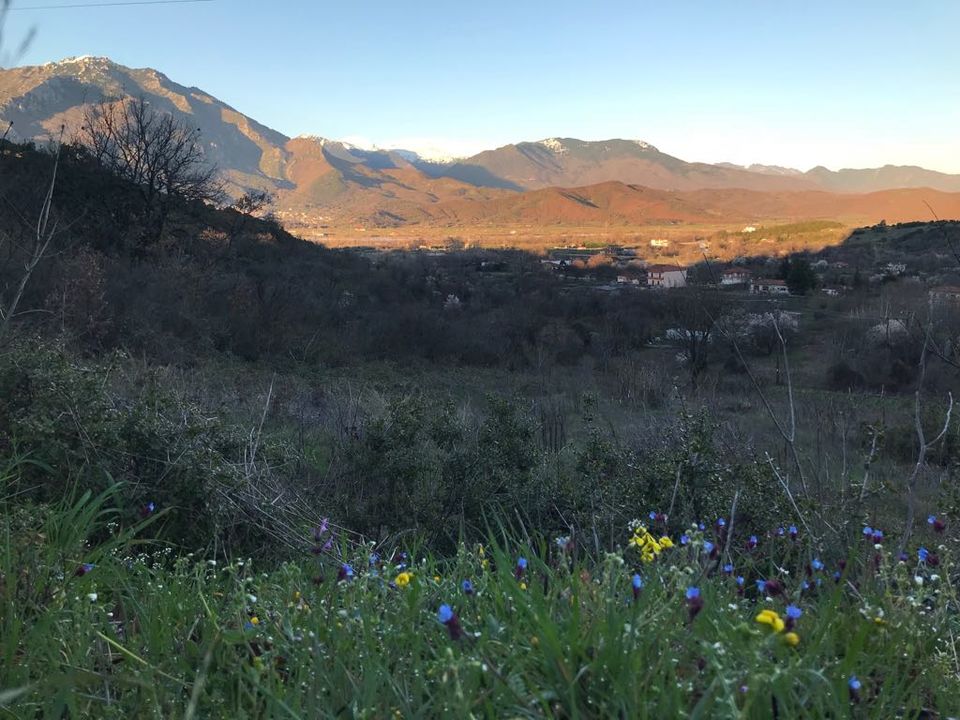 Ok, I am making this name up so I can tell you a bit about this location. I was once again on the 'HALF-DAY TOUR' with VISIT METEORA.

More views of Kastraki. Did you notice that niche right in the centre of the Holy Rock? 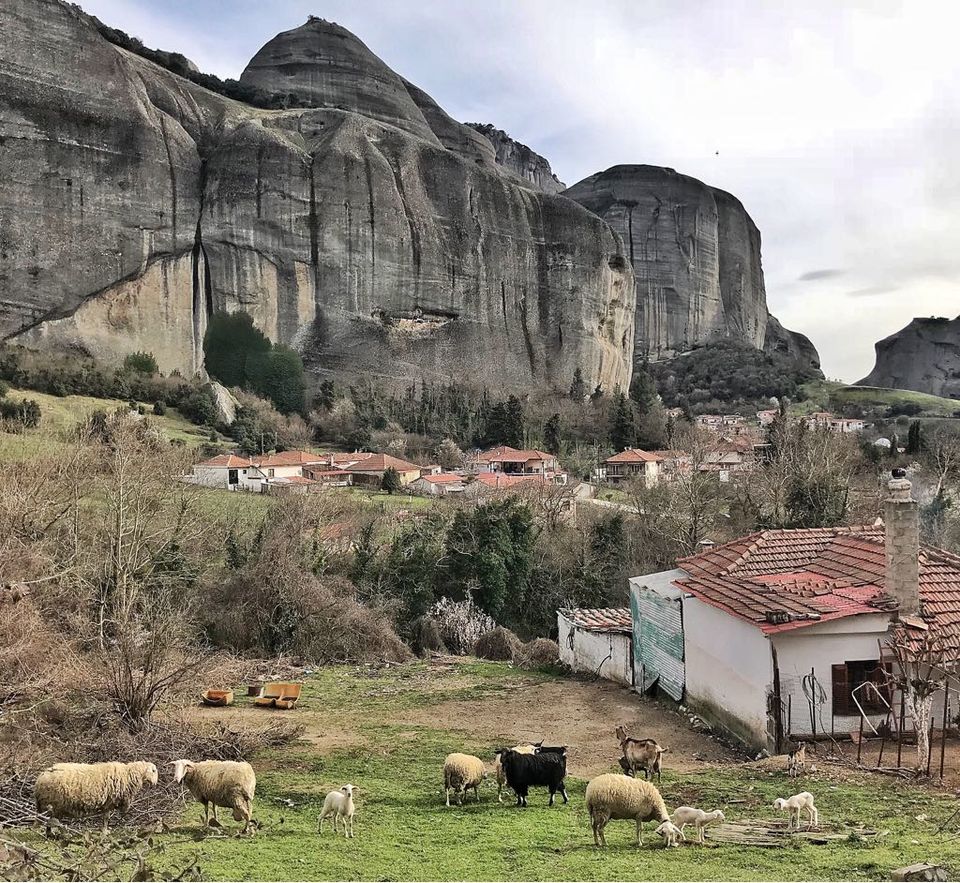 FACTS: Our minivan that wound its way up into the steep hills came to a sudden halt and the guide urged us to look to our right before gearing off again. In the distance, a lot of colourful pieces of cloth clung to a wide niche on the rock face. The guide then narrated a little tale about this custom which takes place on the 23rd of April every year.

Long ago, a Muslim woman's husband met with a dangerous accident. At the time she prayed in the village church for his recovery and offered her scarf to the Almighty. In spite of the locals mainly comprising of Christians, they all believed that it was indeed a miracle that the man was saved and continued to follow the tradition. So every year enthusiastic young rock-climbers take scarves donated by people and tie it up on the rock face. Meteora was SO FULL OF TALES! 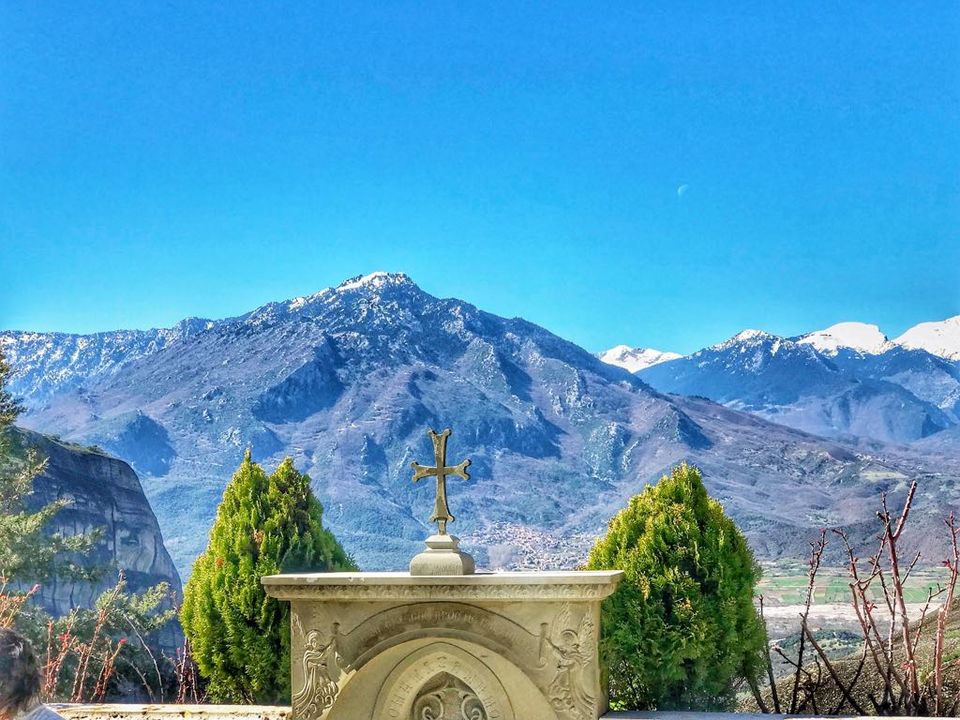 Other residents of the monasteries :P 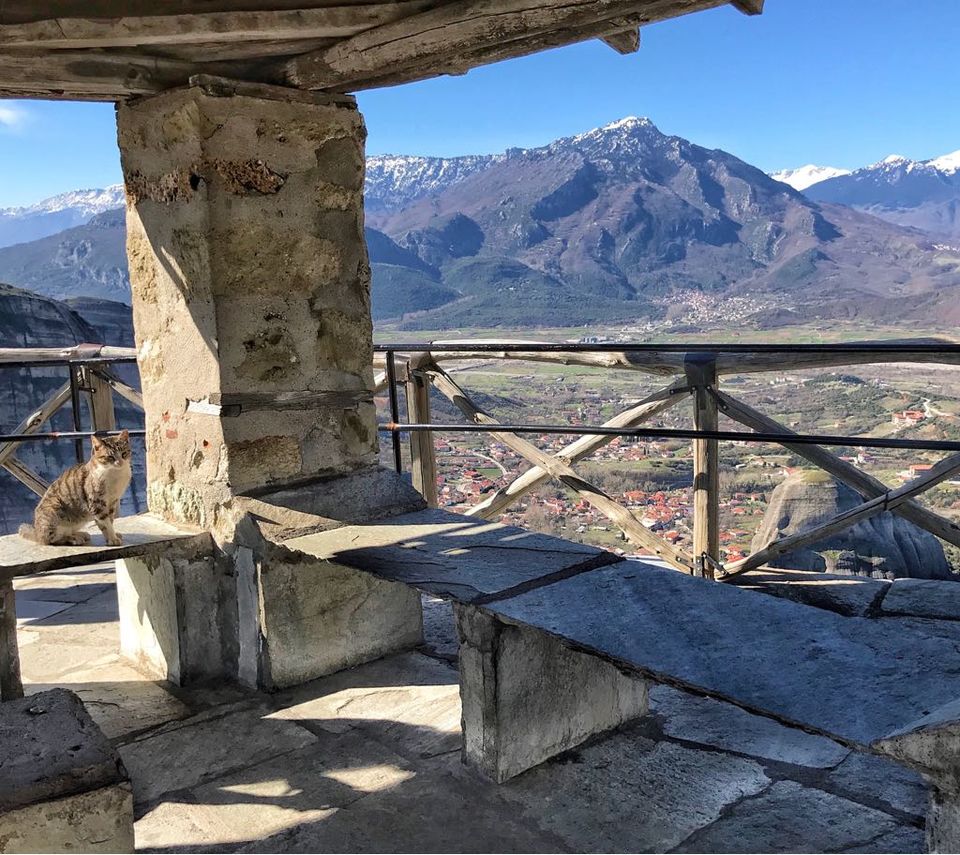 FACTS: The biggest monastery in the region, once home to 200 odd monks is almost deserted now. Just 4 monks remain because too many tourists have started to come poking :P But what is surprising is that the community of monks who have private rights over the area haven't denied entry to the tourists. Now isn't that kind? :) 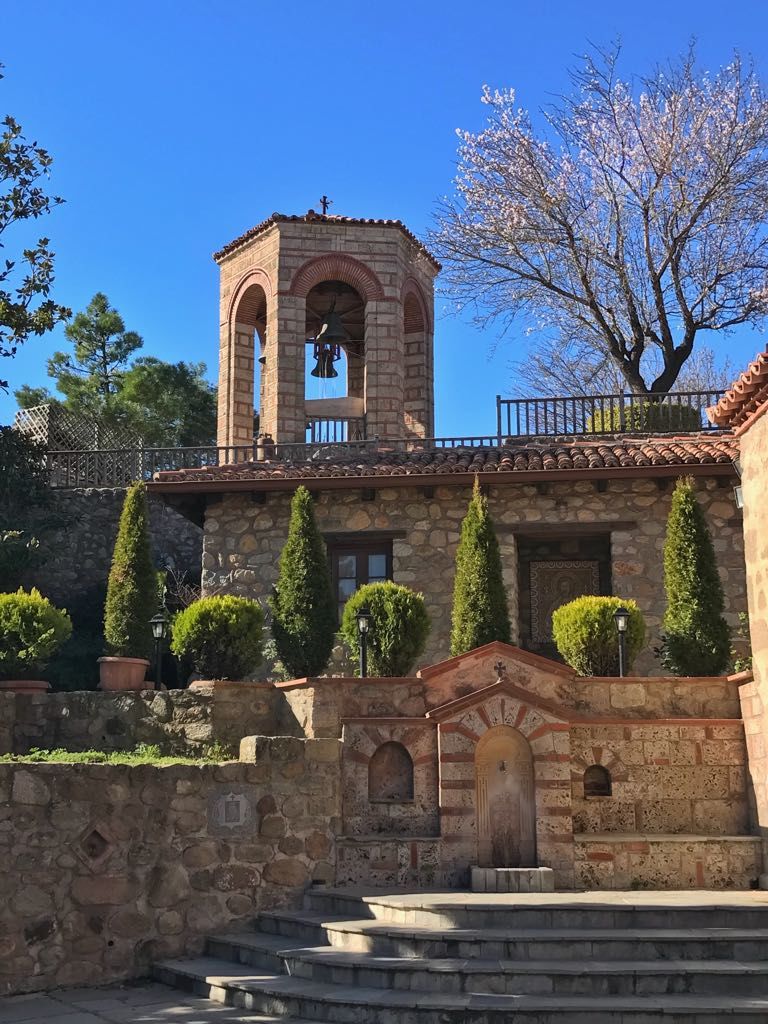 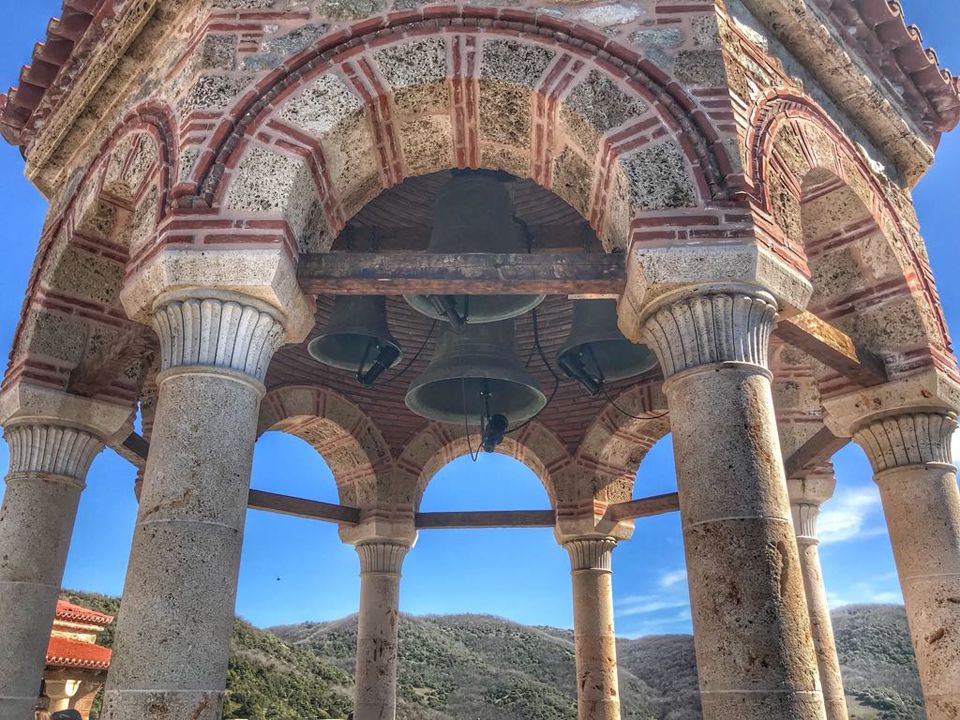 FACTS: Yes, it is the same monastery that caught fire and also the only one to retain its age-old practices of using a pulley to transport materials up into the monastery :) 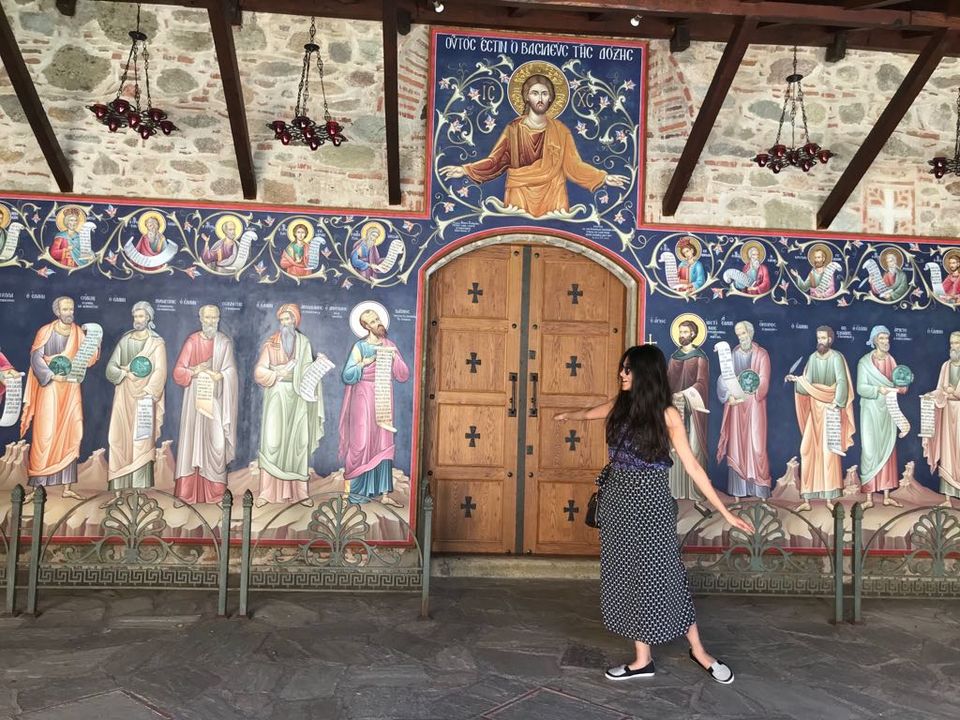 Views of he Varlaam monastery during the drive 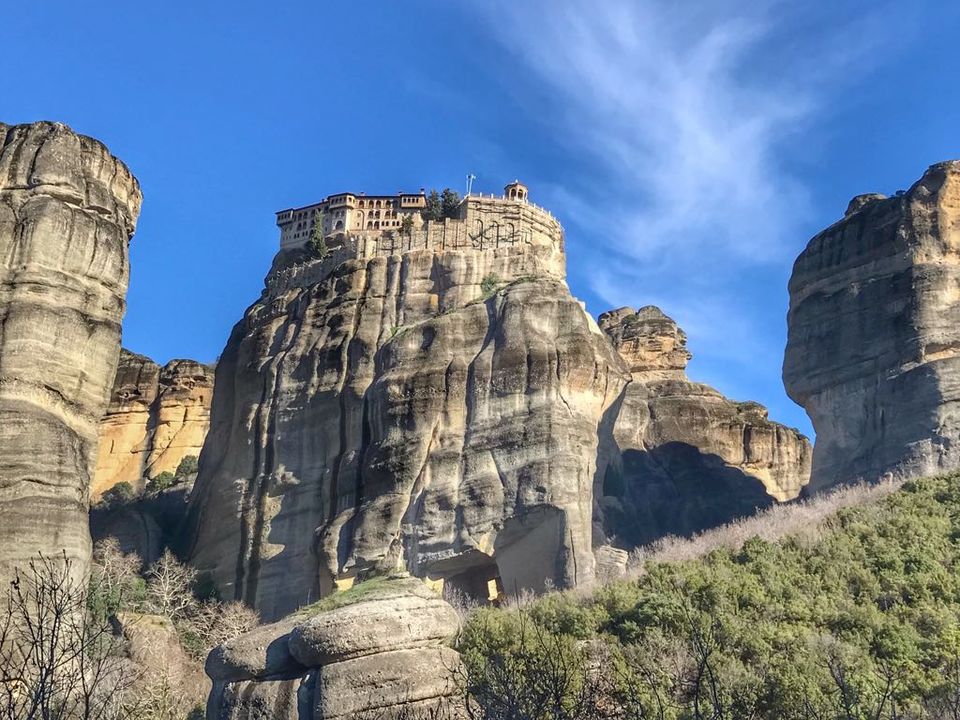 Most famous view of Meteora. Did you notice how different it looks in the morning and at sunset. Check out the 1st picture in the post again! 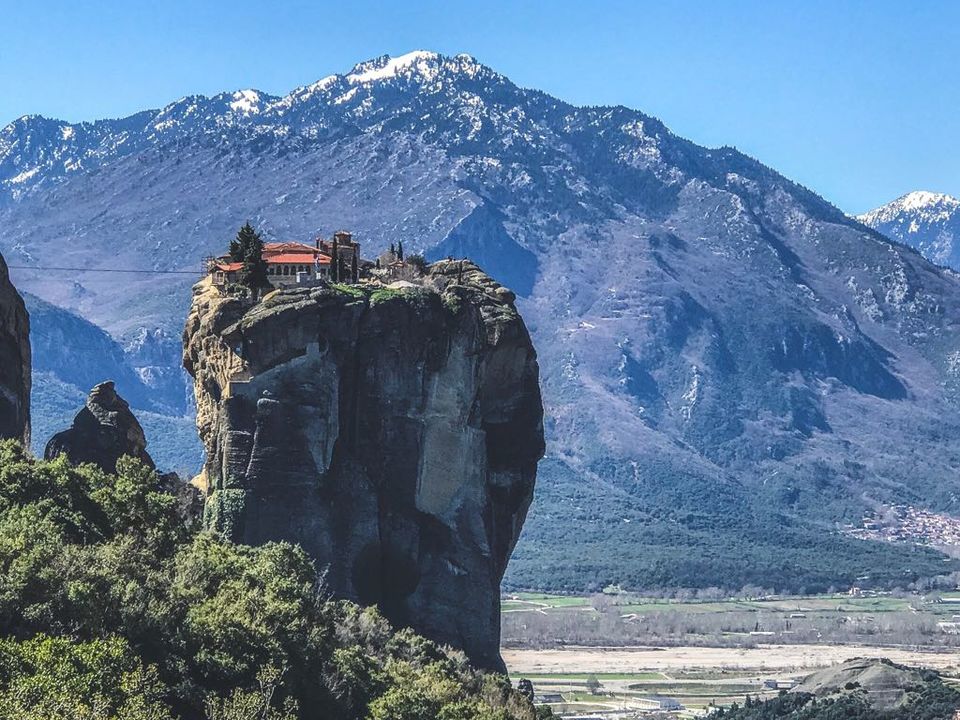 FACTS: Also known as the Roussanou monastery, this is the second one that accepts nuns. A tourist who once visited is a nun here now and the touch of a woman is apparent in every corner. Even though all monasteries requested women in trousers to drape a skirt, this one had the prettiest collection to choose from :)

Views of the monastery of St. Barbara from the Great Meteoron 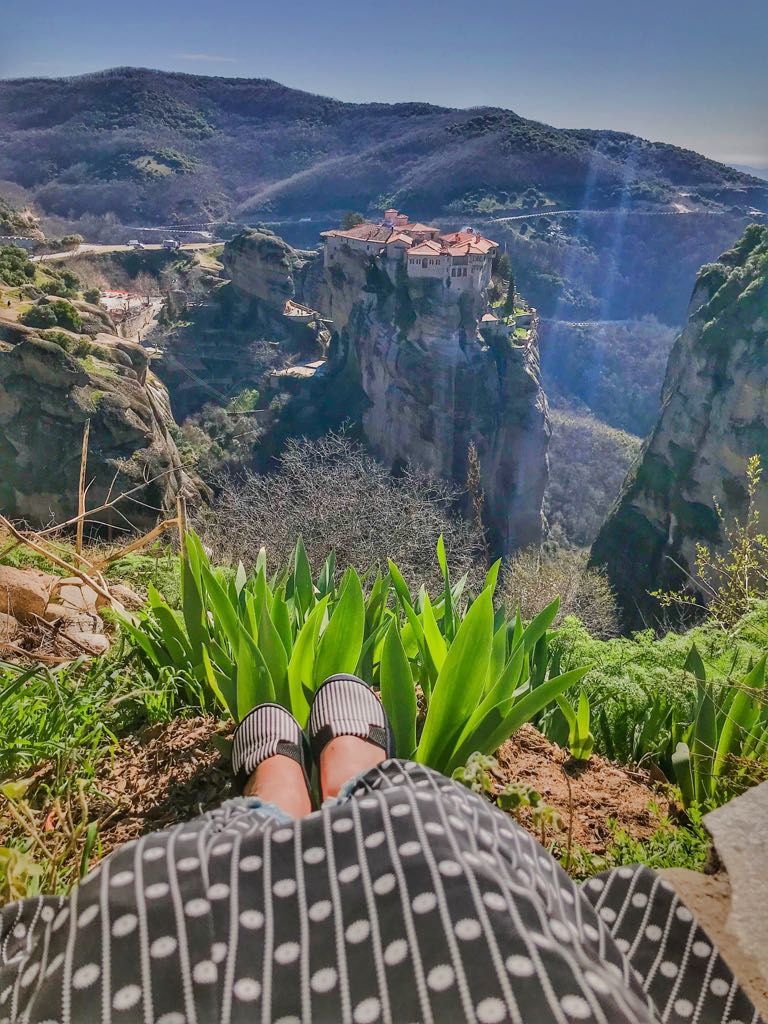 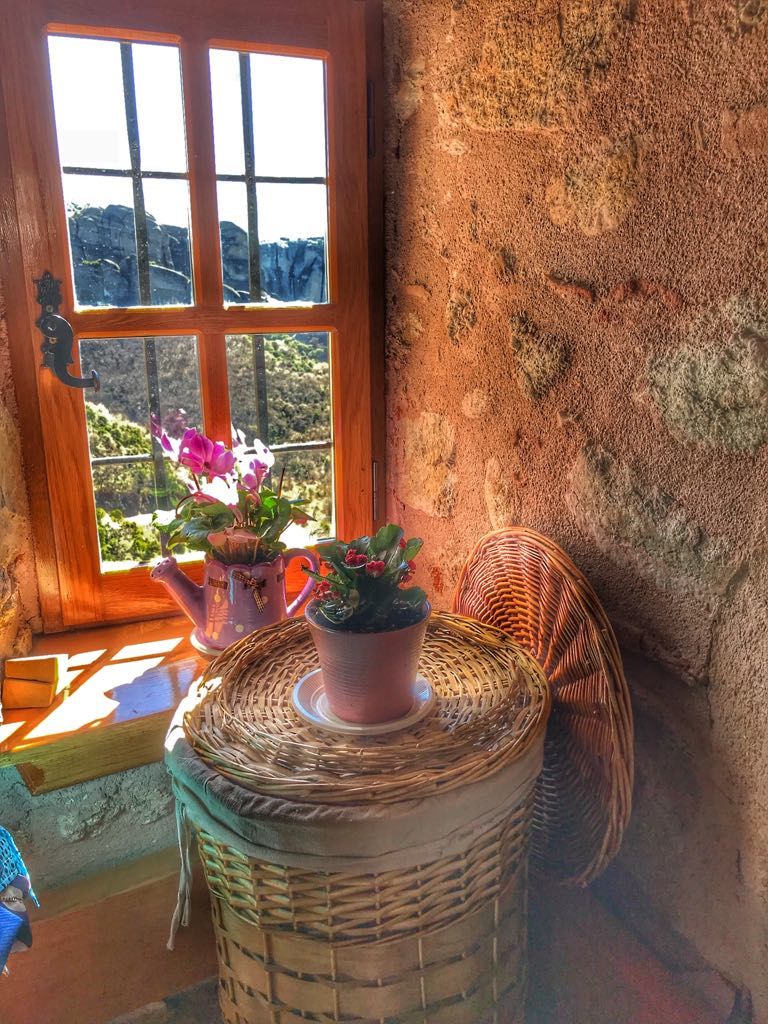 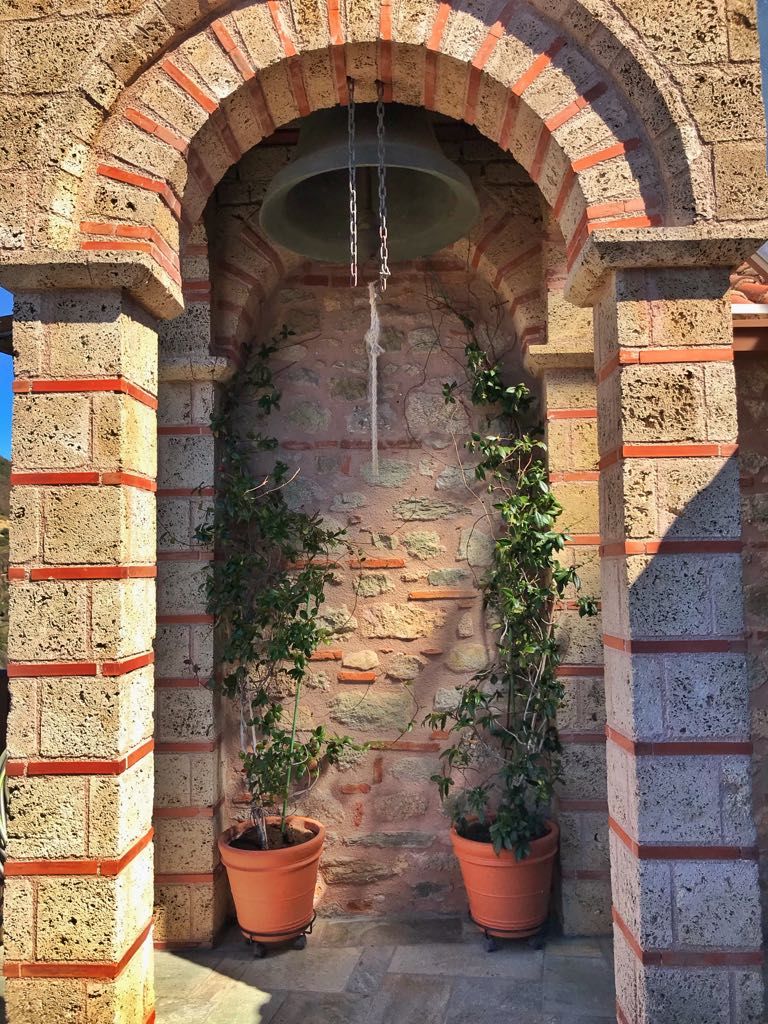 Delphi is a good 7 hours from Kalambaka by public transport. It was a late night arrival for me in Delphi and I hit the bed straight away. Since it was dark, I didn't realize what surrounded me until I opened my eyes to this view-straight from the balcony of my room! 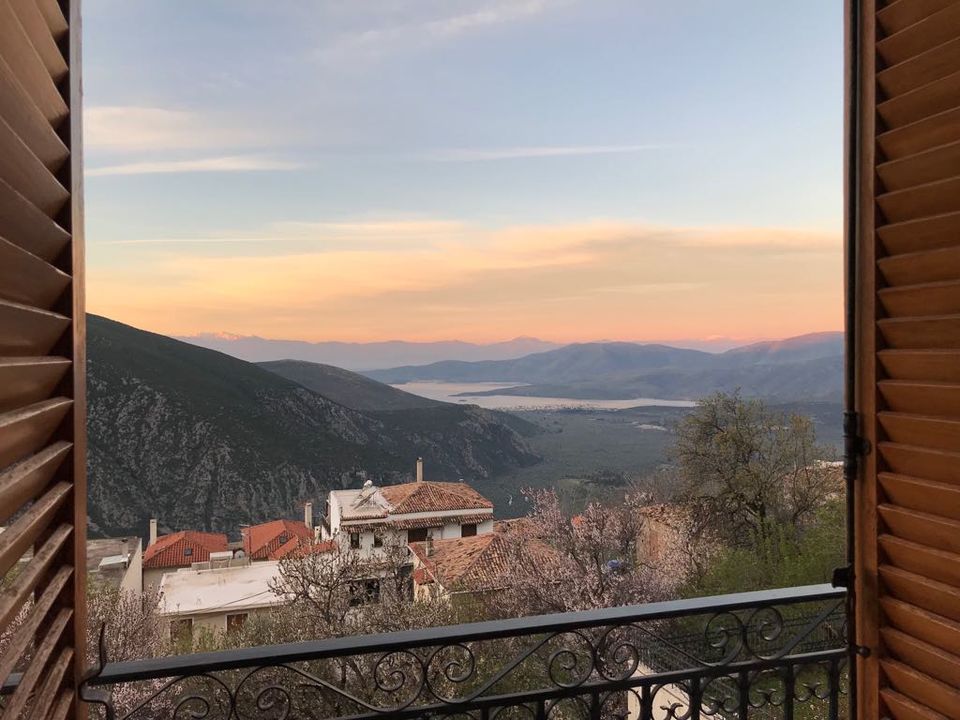 Bus connection details if you can't drive like me :/ 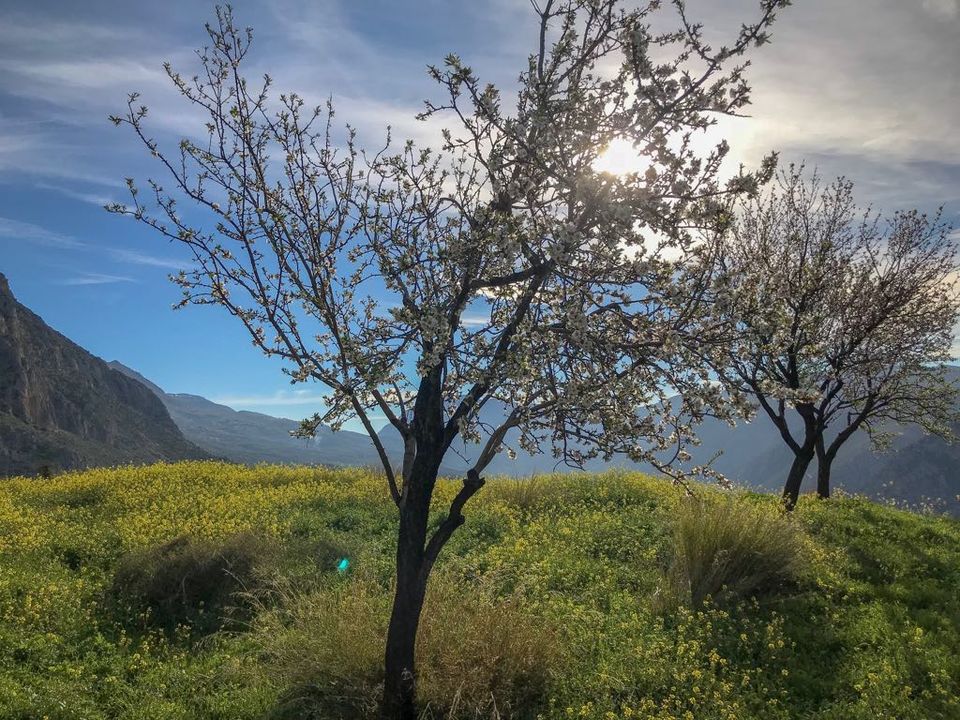 Views enroute to the archaelogical sites 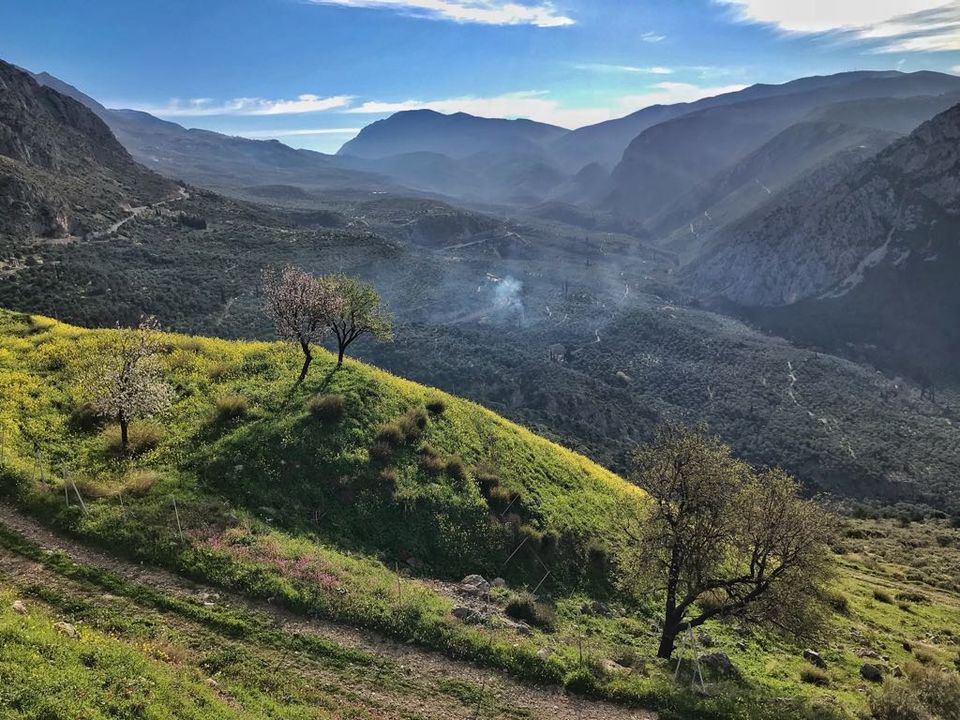 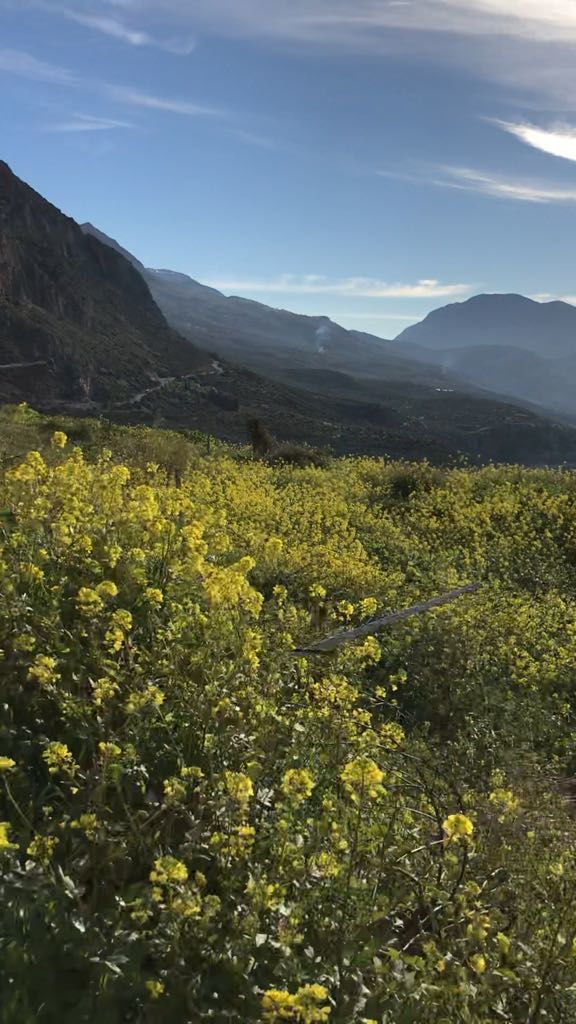 I spent one day in Delphi-home to the ancient oracle which is regarded as sacred in Greek mythology. It is a good two hour hike along the SACRED WAY which connects archaelogical sites like Apollo's Temple and the Temple of Athena. If you grew up reading Percy Jackson, then saying hello to the Greek Gods is exciting :P But the best bit is the trail. It is a steep but enjoyable hike with amazing views of Mount Paranusses and the surrounding mountains.

After a quick lunch in town, I caught a direct bus back to Athens.

Temple of Apollo at Delphi 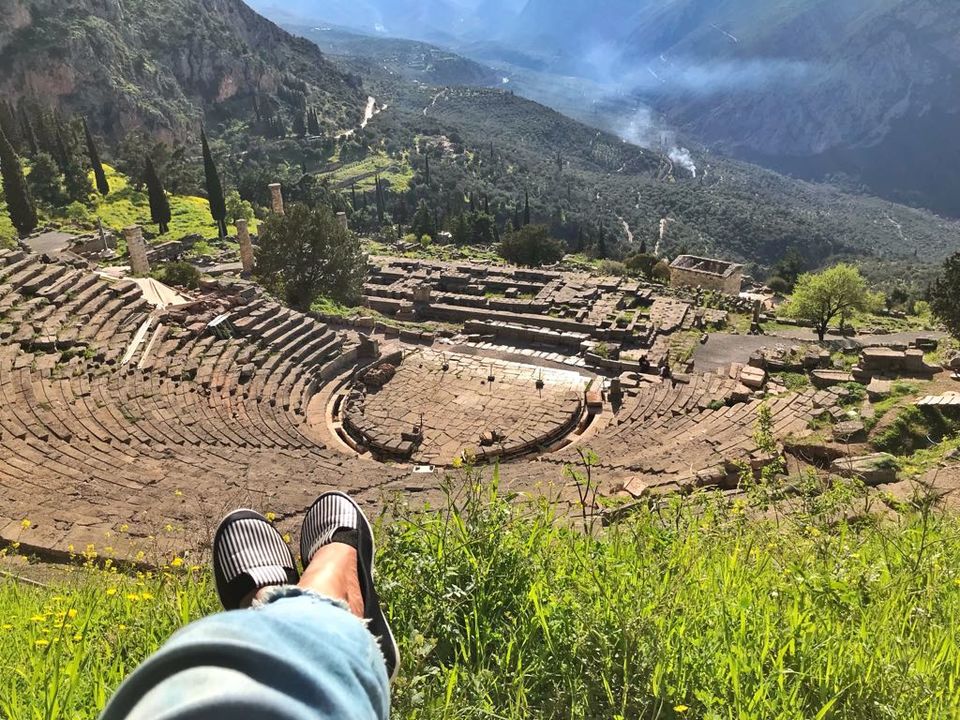 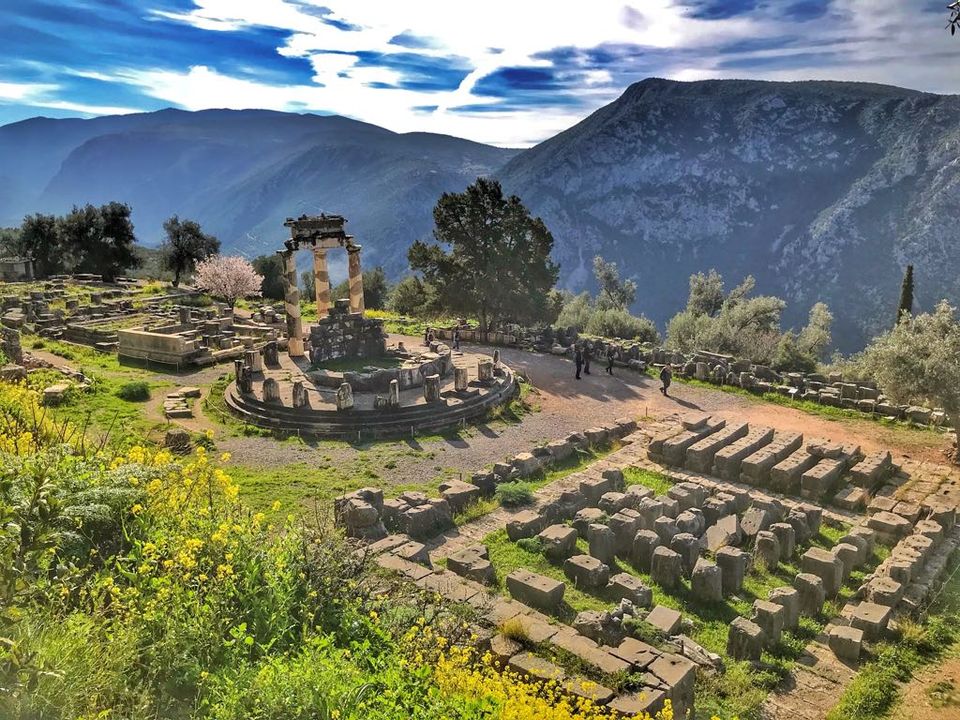