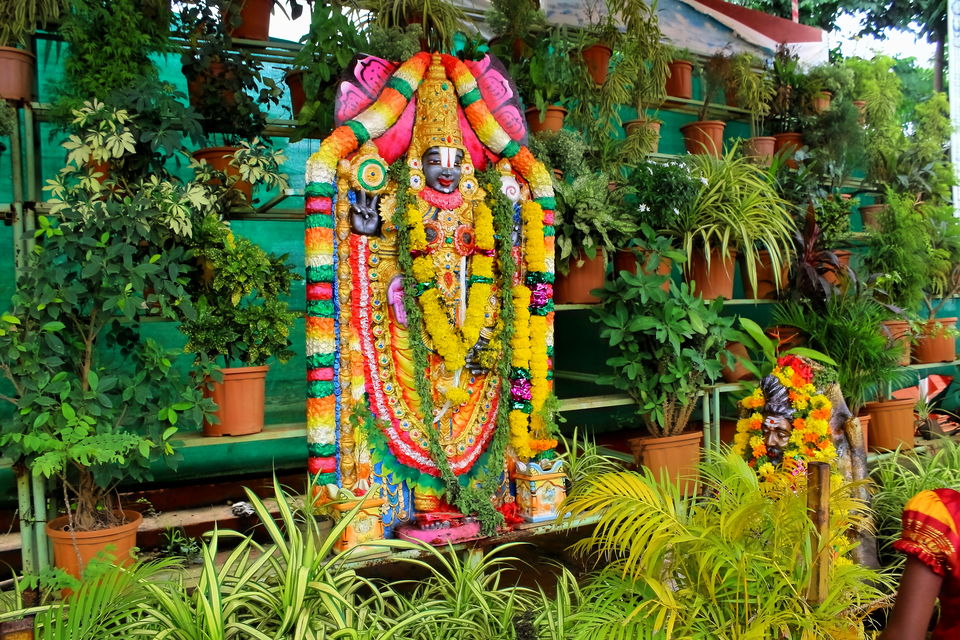 After stuck at home for months together due to 2nd wave of pandemic, finally we have attended a close family function and post that we have decided to plan for a one day trip with our family. We didn't want to travel long distance so after exploring multiple places we have decided to visit the near by two places near to our place. The places are Dwaraka Tirumala (popularly known as "Chinna Tirupati") and Maddi Anjaneya swami temple (Lord Hanuma temple).

The region covered by our Dwaraka Tirumala is commanding the top most conspicuous position in India, being garlanded by these two great Indian rivers Krishna and Godavary, as pointed out by Brahma Purana. The devotees who wish to go and offer their donations, or tonsures or any other offerings to Lord Venkateswara, Lord of Tirumala Tirupati, called as “Pedda Tirupati”, due to some reason, if they are unable to go there, they can offer their donations, prayers and worship in Dwaraka Tirumala temple.

Dwaraka Tirumala is a famous temple from the ancient times. According to some Puranas, the temple is popular even in Kruta yuga and is still attracting the devotees. According to Brahma Purana, Aja Maharaja, the Grand father of Lord Sri Rama also worshiped Lord Venkateswara for his marriage. On his way to the ‘Swayamvaram’ of Indumati, he passed by the temple. He did not offer prayers in the temple. The bride Indumati garlanded him, but he had to face a battle with the kings who came to the Swayamvaram. He realized that the battle was thrust on him for ignoring the temple on the way. After realizing this, Aja Maharaja prayed to the Lord Venkateswara. Suddenly the kings stopped the battle.

It is a great wonder to see two main idols under one Vimana Sikharam. One idol is a full and complete statue. The other is a half statue of the upper portion of the form of the Lord. The upper potion of the form is a self-manifested idol located by Sage "Dwaraka". The saints of the yore felt the prayers to the Lord are not complete without worshipping His holy feet. So, the saints joined together and installed a full statue behind the self-manifested idol, to worship the feet of the Lord according to Vaikhanasa Agamam.

We have decided to start early in the morning as the roads are very bad due to continuous rains in the monsoon. But it asusual we have started around 9:30AM from home and we have reached the first destination point by noon. We have quickly parked our car and rushed to the queue as there is lot of crowd as it is Sunday. We have finished our Darshan via special queue, there is lot of crowd and it is very scary to be in the queue post pandemic, what a pity state we are in.

Once the Darshan is completed we have planned to visit the near by places in the same compound. Here are the few of the attractions of the temple.

• Unique temple having two deities of lord Venkateswara in one sanctorum

• A huge statue of Annamayya

• Temple located on a mound surrounded by green planes

We also have a lord shiva temple(Sri Konda Malleswara Swamy Temple) if we go a bit ahead once we enter the parking area. That is a small temple and we also have a play area for the kids and also a small park near the same. We also have a rabbit park, small pond with ducks and the temple elephant as well. Kids can have fun time. We also have a free temple food available, we must try that which is extremely tasty. Due to pandemic they are giving it as a take away instead of serving food in the hall.

It was raining so heavily post the Darshan and we have moved to our next destination i.e. Maddi Anjaneya swami temple. That is a beautiful temple in between the green fields and just next to the high way. A 200mts deviation from the highway. This temple is around 32Kms from the Dwaraka Tirumala temple. Sri Maddi Anjaneya swami temple is located in Guruvadigudem Village. This is a holy Punyakshetra where you find lord hanuma with fruit in one hand and Gadha in another hand. He sat on the Maddi tree with the wish of his devotee who has done tapamu on the banks of Yerrakaluva . It is believed that Anjaneya swami gave a boon to Madvasura to take a form of Maddi tree so that he would be permanently be with him and this place would be famous with his name Sri Maddi Anjaneya swami according to Madvasura desire.

The rain just halted as soon as we reach the parking area of the temple and we visited both the Hanuma temple and one more Lord venkateswara temple in the same campus. We have also seen beautiful Kolatam dance in the temple campus which is fantastic experience. After that we had some refreshments and started our return journey and the rain came back as soon as we hit the road. The return route is horrible with the rain it was another heck of ride but with cousins and the chatters we didn't feel any tiredness and we reached home around 8PM. Another beautiful trip comes to an end.

Here are the few more random pics that I took over the journey.