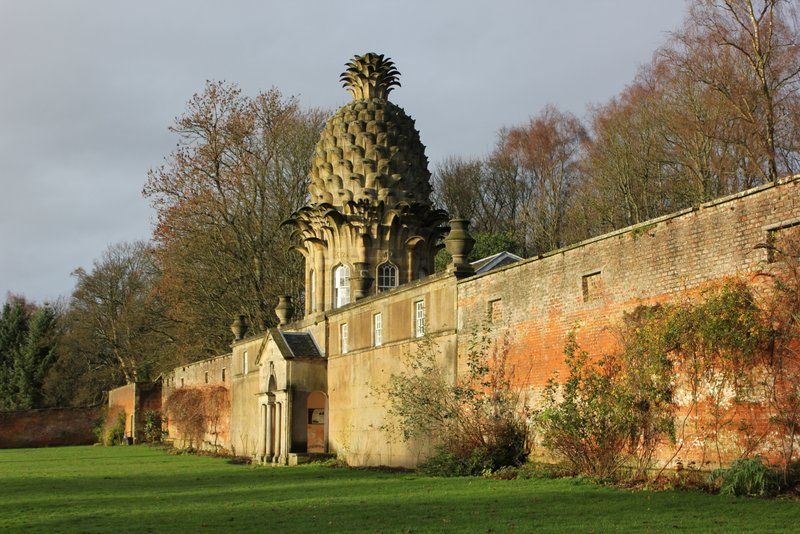 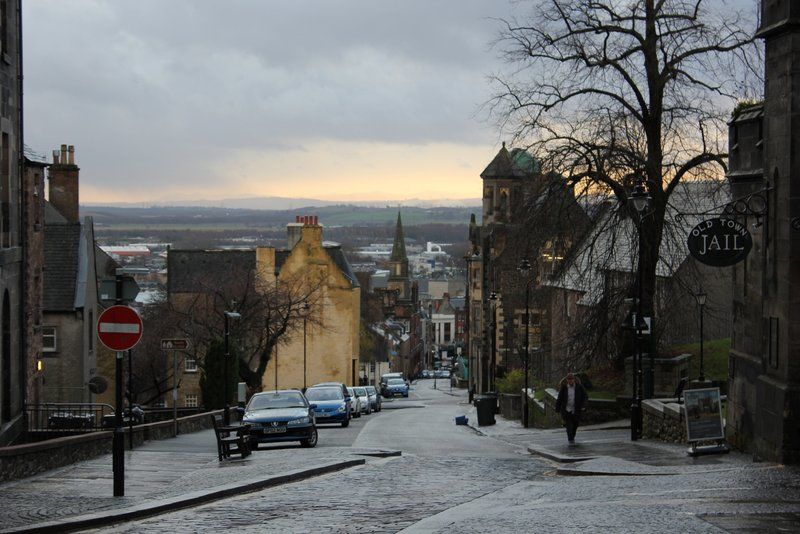 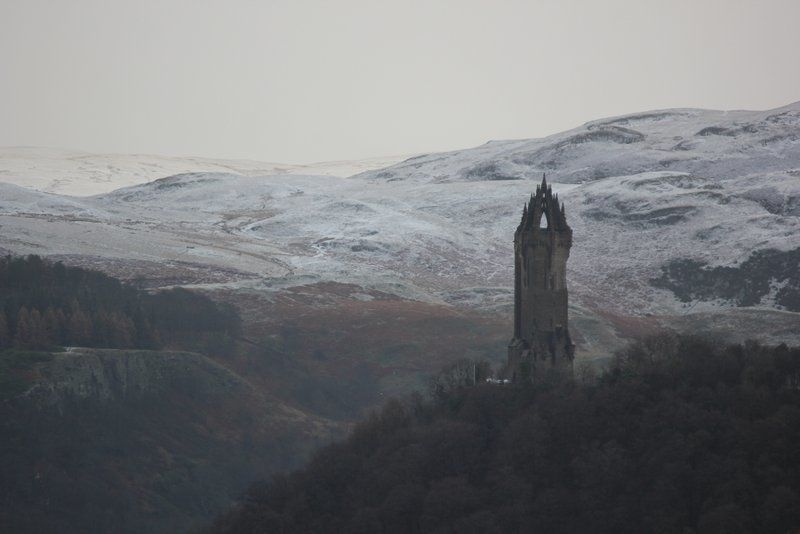 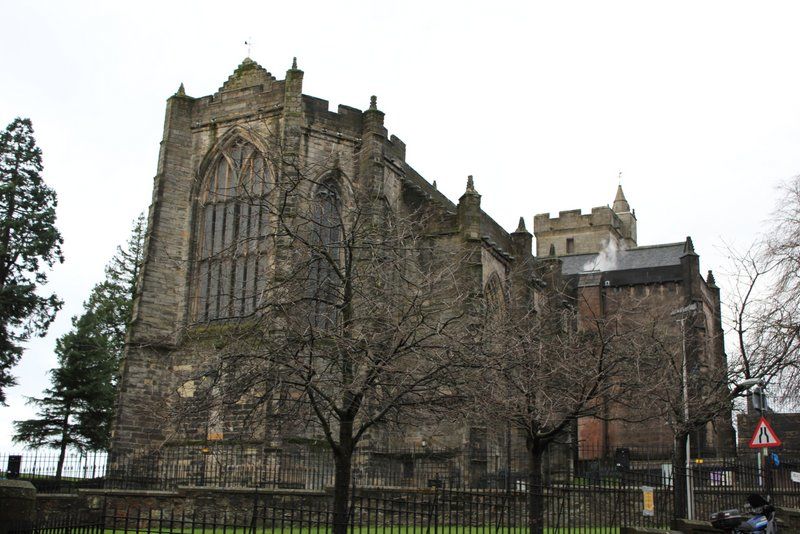 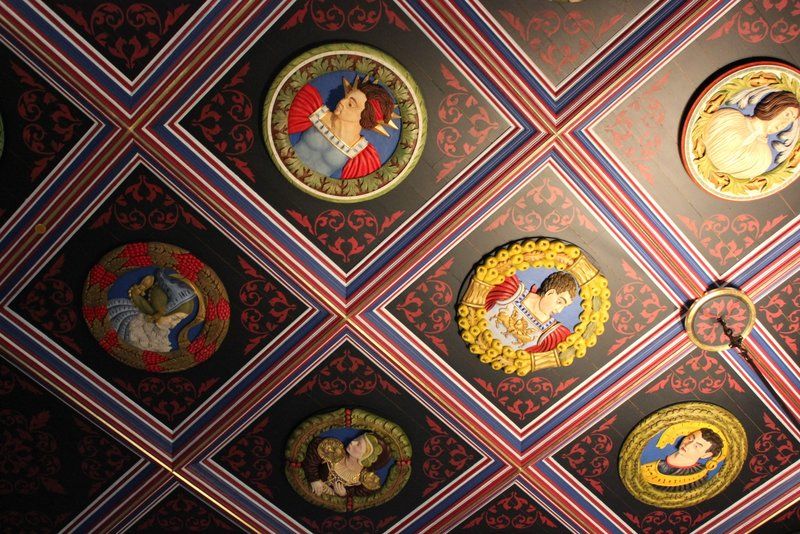 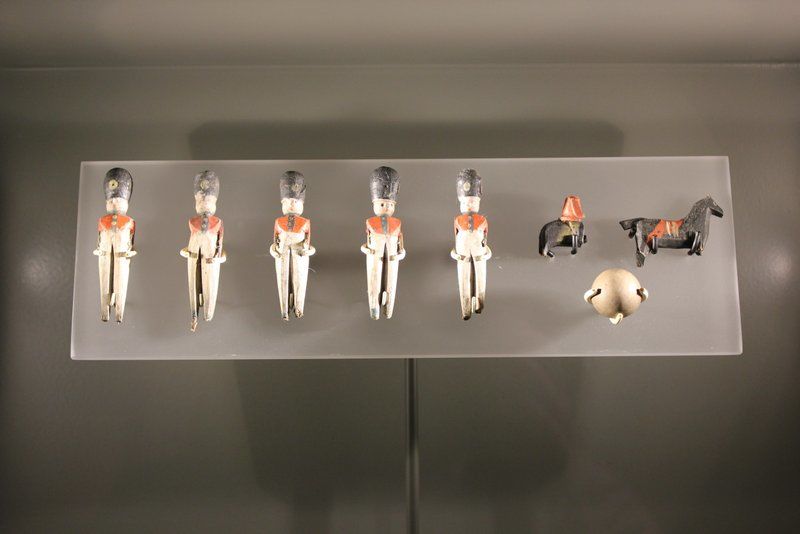 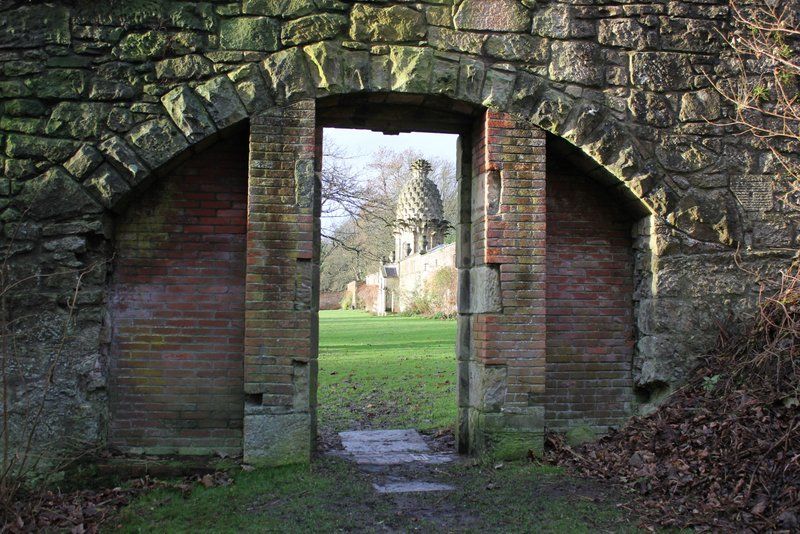 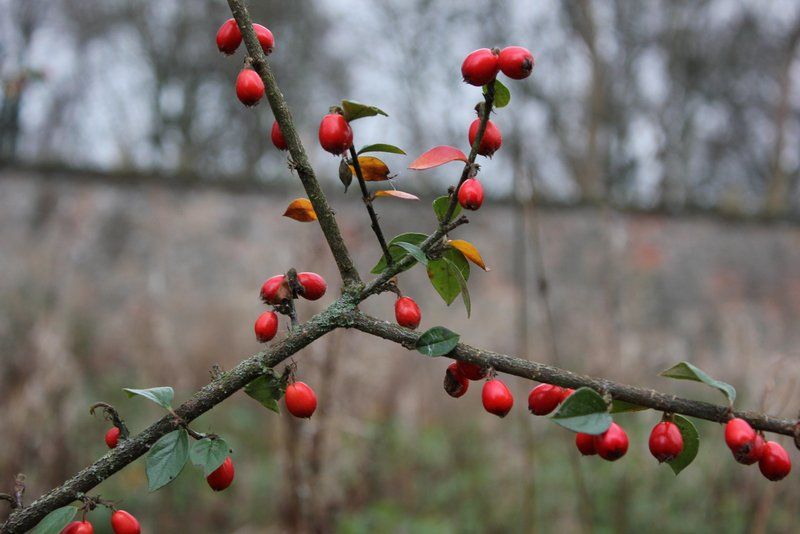 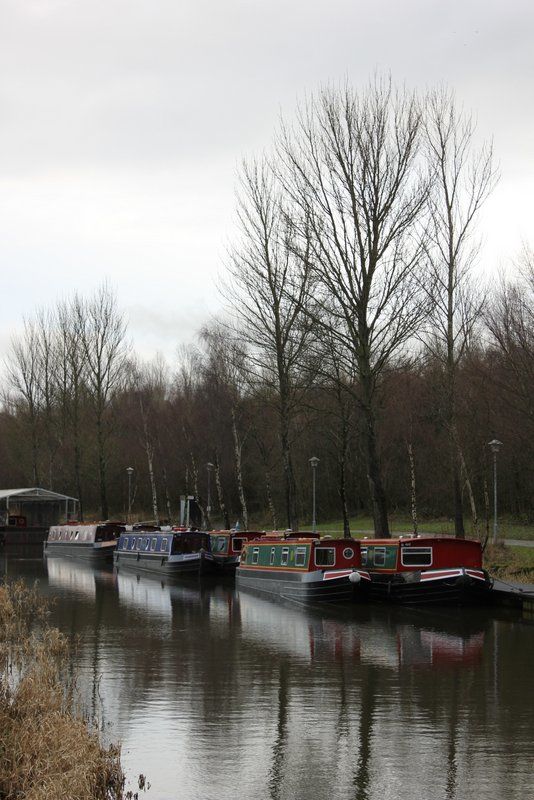 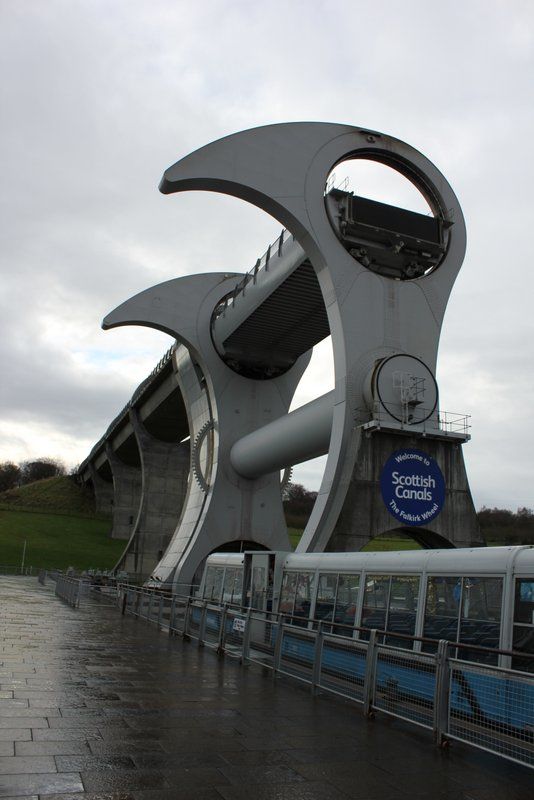 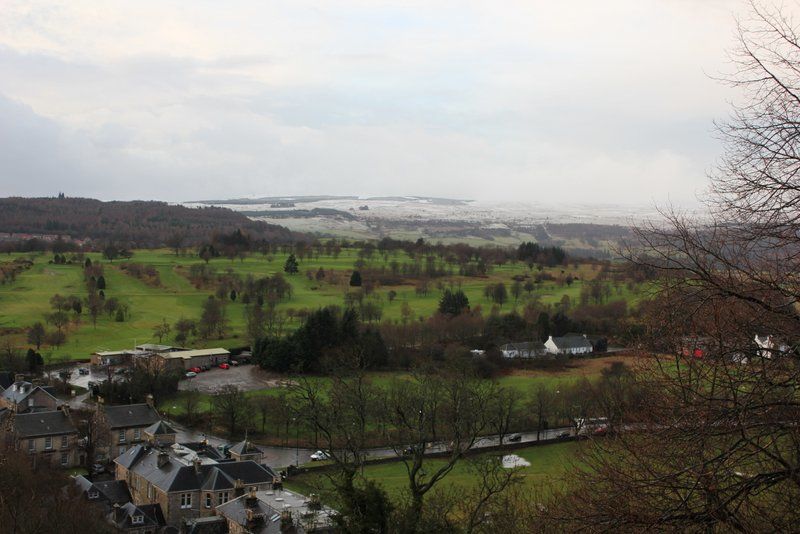 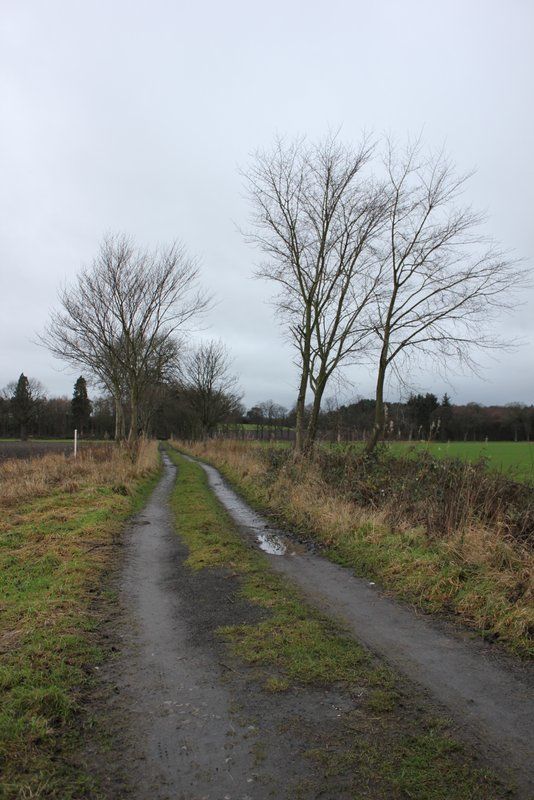 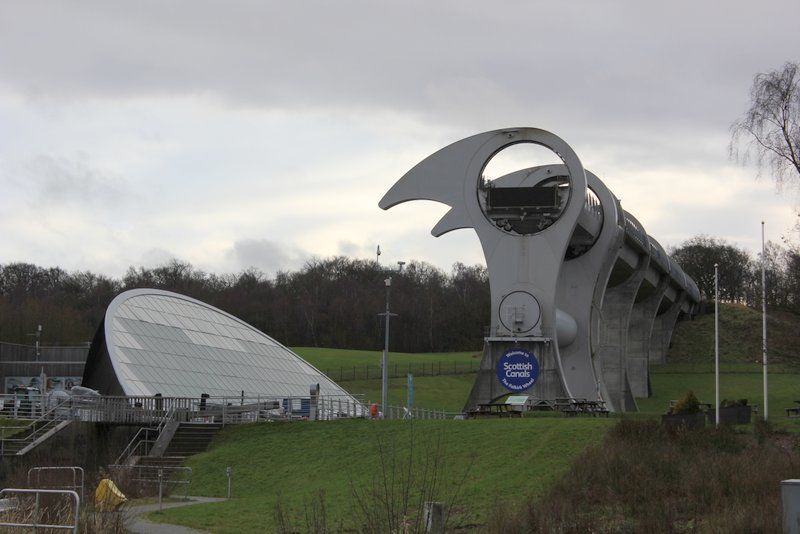 Right before leaving to go home, I went on a short trip to the Dunmore Pineapple, the Falkirk Wheel, and the city of Stirling.

The Dunmore Pineapple is an architectural oddity built in the 18th century with a pineapple shaped cupola. It was really awesome- I definitely recommend visiting if you are in that area. There was a short trail to get to the building with some lovely Scots pines and an interesting ruin.

The Falkirk Wheel is a giant rotating boat lift, an engineering marvel that replaced a series of 11 locks between two canals in 2002.

I found this paragraph from an article really amazing:

"Based on Archimedes’ principle, floating objects displace their own weight in water, so the caissons always weigh the same! Always remember the classics. By this method, the wheel is always balanced, allowing the most mind-blowing statistic about this wonder to exist—the Falkirk Wheel uses only 30.2 horsepower to rotate! In just over five minutes the wheel makes a half rotation, moving 600 tons to its new canal, using a measly 1.5 kW/h. The same amount of power used to boil eight kettles."

We visited Stirling on my first trip to Scotland in 2009, but for some reason were not able to spend much time exploring. I really enjoyed the city- in fact, I'd have to put it high on the list of my favorite cities in Scotland. I loved how the town was placed on a slope- it made getting lost impossible, and it was awesome seeing how the buildings progressed through time (the castle and oldest structures were at the top, while a new shopping center was at the base of the hill). I arrived in the evening, and checked into the youth hostel, went for a walk, then got some dinner and went to see the second Hobbit movie.

When the movie ended around midnight, I walked back into town. It was very eerie- the wind had picked up significantly while I was inside and was screeching and howling as it swept through the narrow medieval alleys. Nobody was on the streets, and dead leaves were spiraling though the air. I felt like I was in some sort of scary story, like the kind my sister and I used to read under the covers with a flashlight. The hostel looked fine during the day, but the full moon lighting up the church-like exterior and the surrounding gravestones was a bit too much for me. When I got inside my heart was beating pretty fast! It was hard to sleep that night because the near gale force wind was so strong it shook the entire building.

The next morning I got up early and walked over near the Church of the Holy Rude and John Cowane's Hospital to look for a geocache. I wasn't successful, but it had snowed during the night so I got a great view of the hills of the Trossachs lightly dusted white. Then I went over to St. Mary's Wynd, on the other side of the hill to get a view of the The Wallace Monument (I even found an interesting little raised lookout). After that, I went over to the Old Town Cemetery. It was really an unusual graveyard- the features I found most interesting were The Martyrs Monument, The Star Pyramid, and The Ladies Rock. From there I visitedStirling Castle, which was very impressive- I especially liked the stories on placards throughout the castle, like these about the Great Hall (taken from Stirling Castle website):

"Two royal baptism celebrations were held in the Great Hall. The first was at Christmas 1566, when Mary Queen of Scots hosted a three-day spectacle for her only child, the future James VI. The entertainment culminated in a banquet in the Great Hall. The guests sat at a round table, in imitation of King Arthur and his knights, and the food was brought in on a mobile stage drawn by satyrs and nymphs. A child dressed as an angel was lowered in a giant globe from the ceiling and gave a recitation. The banquet ended with a great fireworks display – the first ever witnessed in Scotland.

The second celebration came in August 1594, when James VI celebrated the baptism of his firstborn, Prince Henry. The climax was a banquet, the highlight of which was the fish course. This arrived on a model Ship of State, over 5m long and more than 12m high, floating on an artificial sea. As it sailed around the hall‚ 36 brass guns on board fired off a salvo."

You can find more short stories on this page. I also liked the interactive mini-museums within the castle and the tapestry workshop.
After visiting the castle, I went down the Back Walk to the Stirling Art Gallery and Museum. It had quite a few nice historic exhibits including an old dollhouse and projector. Finally, I stopped by the Thistles shopping mall, then took the bus back to St. Andrews.