Eating Out in Vienna

Our Food Favorites from the Austrian Capital 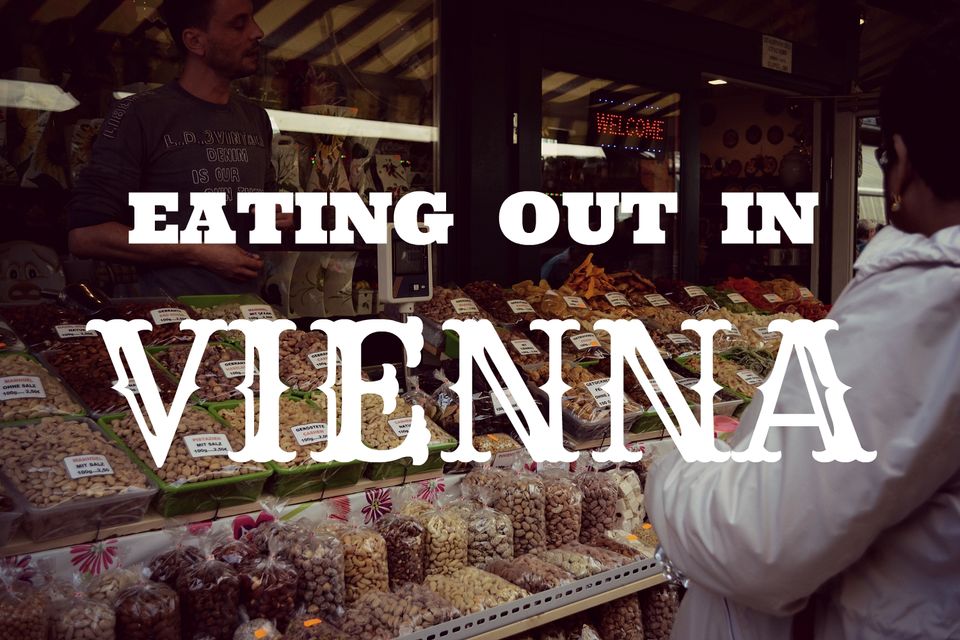 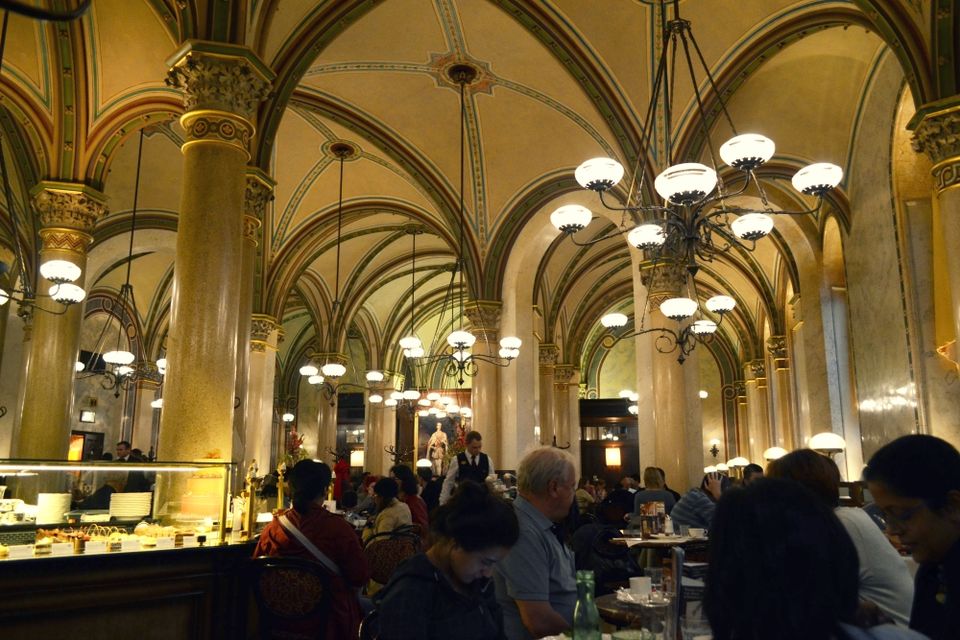 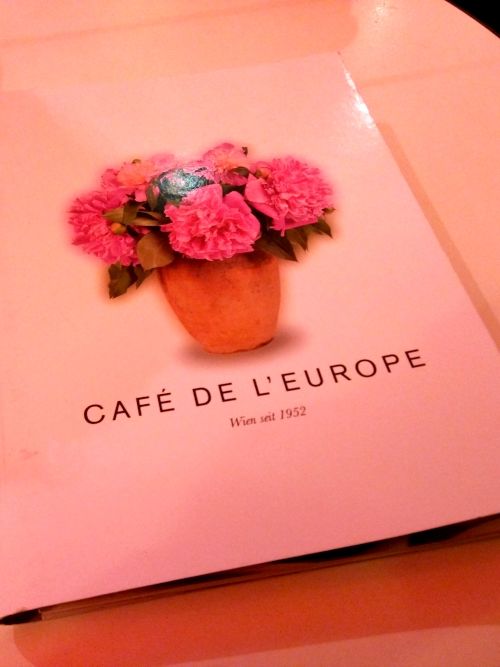 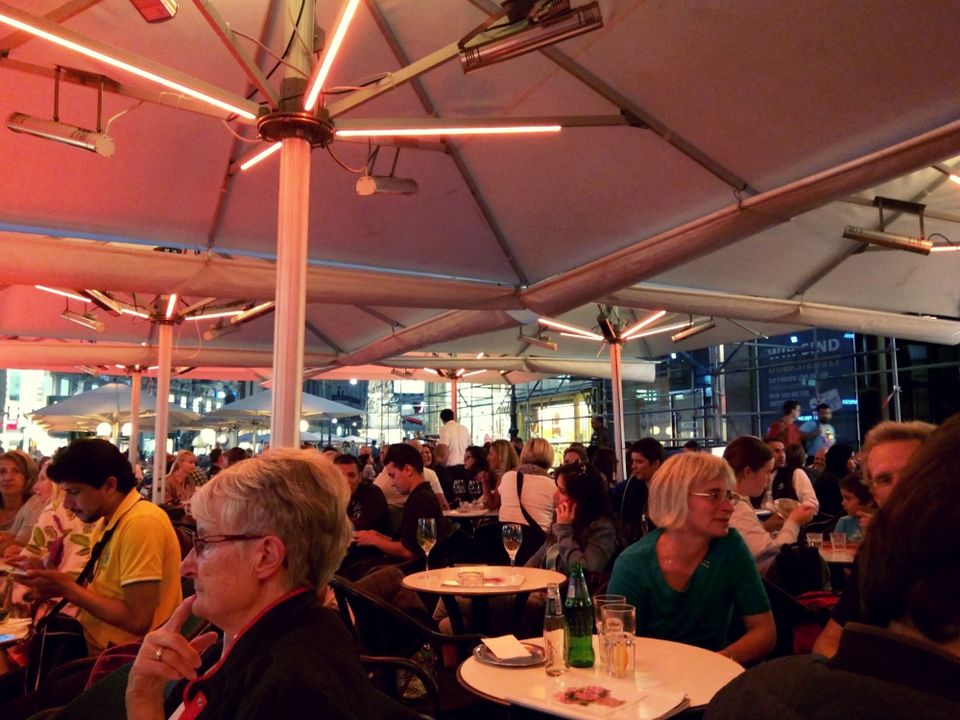 Go for a tiramisu sundae at Cafe de L'Europe 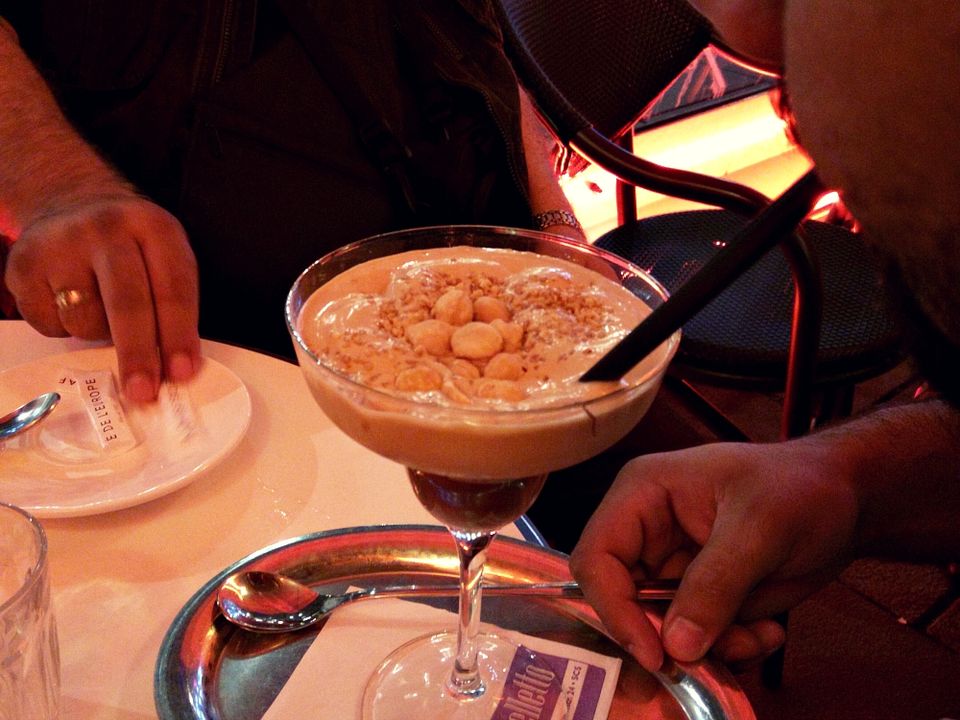 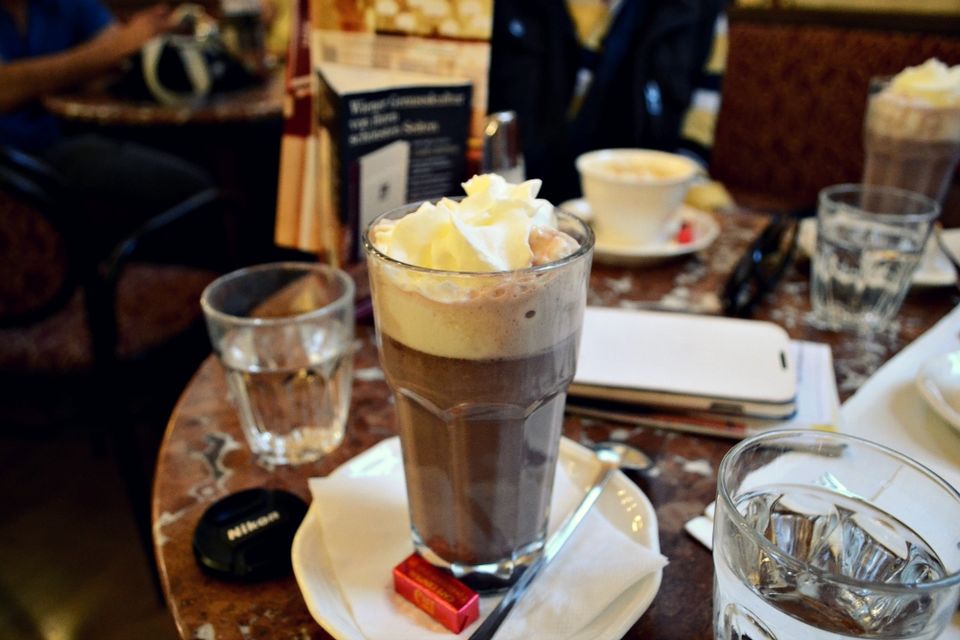 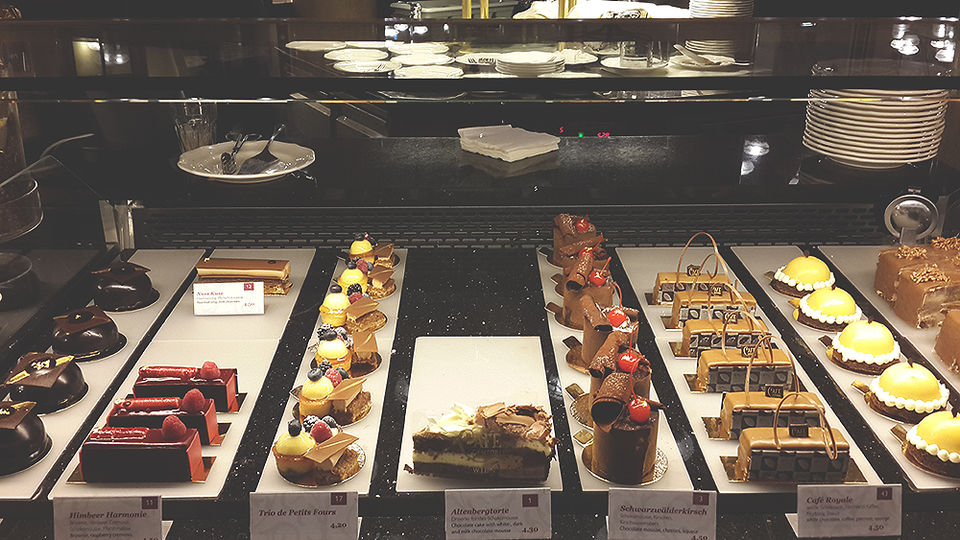 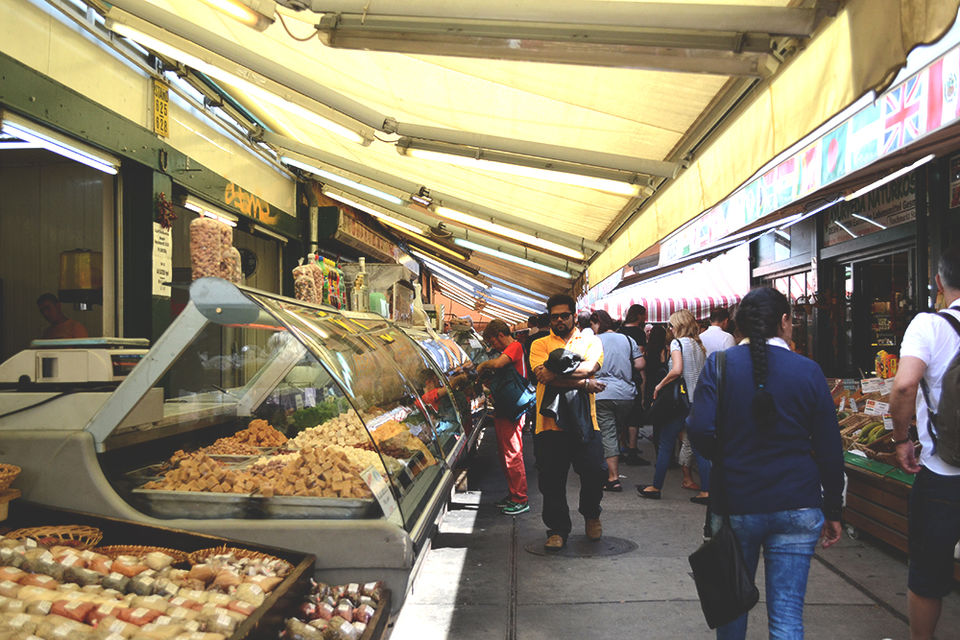 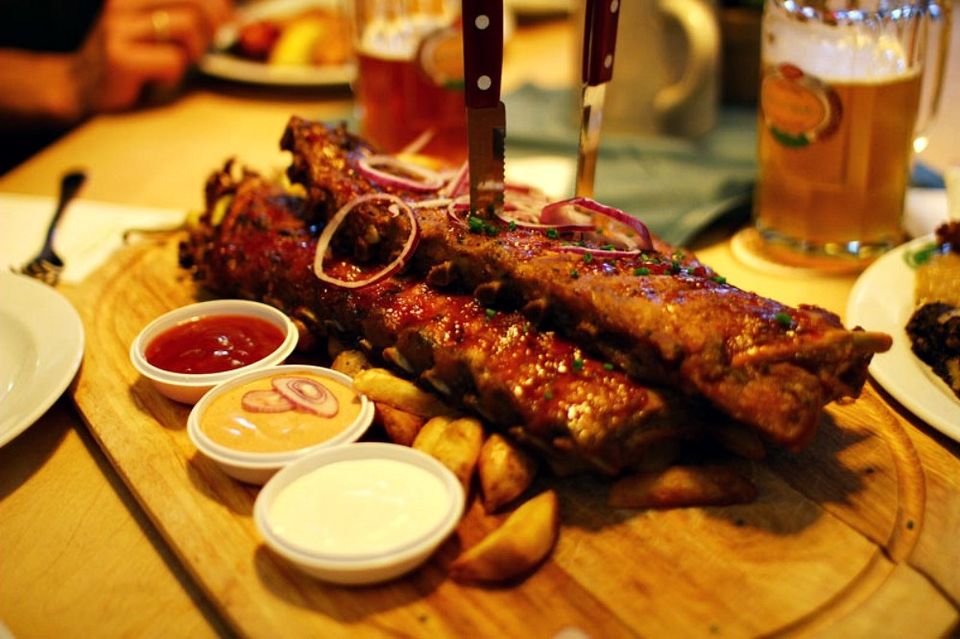 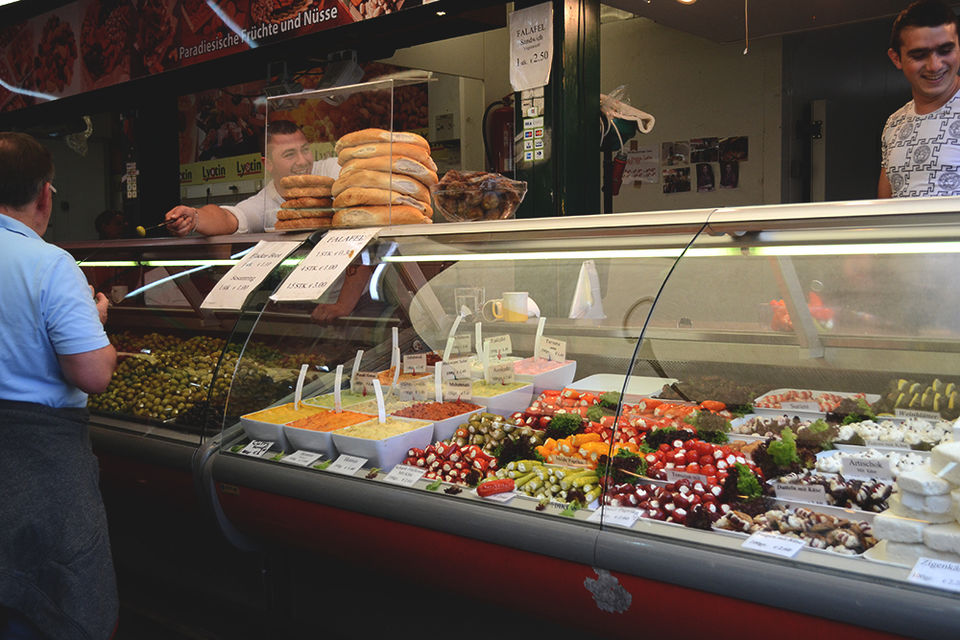 We were in Vienna and we came back with ecstatic tummies. I don’t have to remind you that I am a hardcore food-tripper more than anything else and I always start by researching the local food of a place before I even jot down the names of any sightseeing spots.

And that’s exactly what I did before visiting the Austrian capital. I learnt about the Viennese cafes, I drooled at the thought of sausages, I grabbed Salm Braeu’s address and took a train ride to Vienna with visions of Wiener schnitzel in my eyes. I also found the creamiest hot chocolate outside of Paris. No shit.

Grab a paper and pen and take notes on the places to eat at when you’re in Vienna! Vienna’s popular market is your best bet when it comes to brunching or even lunching. The market now has over 120 shops selling fruit, veg and meat. But that’s not the only things you’re going there for. Naschmarkt also has several vendors selling Middle-Eastern array of foods, Greek delicacies, ice-creams and gelatos, shops selling homemade chocolate, local beer, their very own versions of wiener schnitzel and of course, Viennese sausages. Chances are that by the time you’re don walking the length of the market, you’ll be filled to the tee with prosciutto-wrapped dates, Lebanese tabouleh, pickled olives, house-made salamis and banana-flavored gelato. However, don’t stop there. Naschmarkt also has an array of superb restaurants to offer. Food institutions that serve up fantastic seafood, Szechuan dishes and also local Viennese food. Washed down with a pint of Steigl, of course. A stone’s throw away from St. Stephen’s cathedral, this café not only has a hole-in-the-wall gelateria for those walking by, but also delivers yummy sundaes for those who have a little more time to sit and do a bit of people-watching.

You can grab a gelato on the run if you’re keen on finishing your shopping or if you’ve got more sightseeing to cover. But we would seriously suggest you to take some time and ask the waiter for a seat outdoor. Order some coffee or beer and a couple of sundaes and watch the busy city bustle by. Their cafe offerings are far better than their lunch, so don’t plan on having a full meal when you visit. Evenings are ten times busier than the mornings or afternoons, but seats change swiftly and that amounts to very minimal waiting time. When you’re in Vienna, it is assumed that you’d want to visit Hofburg Palace, for its history, architecture and the Spanish Horse Riding School. Once you’re done with a visit to the Sisi Museum and a ride in a horse-carriage around Stephensplatz and Innere Stadt, make your way to Café Central. Cafe Central is an institution by itself and has been so since the 19th Century. Obviously, that makes it a busy cafe to visit. The waiting time can go anywhere from five to twenty minutes. The first time we visited, we waited for 5 minutes for a table for four at the bakery. When we went back a day after, the queue had extended outside the cafe and on to its patio seating. Once you’re in you’re greeted by a statue of Peter Altenberg. Take your seat and quickly order for some coffee and hot chocolate. Trust me when I say that Cafe Central’s hot chocolate is one of the best you’ll have outside of Paris. Then make your way to the display case and choose your guilty pleasure of the day! For a whopping dose of grandeur and history with cake (of course, you’ve got to have cake), Hotel Sacher would be our top choice any day. This legendary establishment is not only a grand institution in Vienna, it is also the birthplace of the Sacher Torte. Café Sacher is part of the establishment, and apart from the Sacher Torte, a double-layered chocolate cake with a layer of apricot jam in between and a layer of chocolate ganache on top, you can also opt for the Sacher Melange, black coffee served with milk and topped with whipped cream. My personal favorites were the Fiaker (hot coffee served with cherry brandy) and the Anna Sacher Kaffee (black coffee topped off with egg-nog, very festive indeed)! OK, let’s be honest. This one is another tourist-puller, but you’ll have to swallow that and not think about it, because of their food. Salm Braeu serves up spare ribs that are undoubtedly one of the best, this side of the Atlantic. The place is always bustling and calling ahead might prove helpful, in fact, advisable. Although the waiting time we faced was a little more than five minutes when we arrived for dinner without a reservation (ummm, maybe we got lucky). Considering the quantity, they’re not too heavy on the pocket either, about 15.5 Euros a plate.

They also have their own brewery & distillery that churns out a super-foamy brew that goes perfectly with the sauce. If you’re not in the mood for ribs (gasp!) then order the monster of a pork knuckle and dig in!

Stop at any one of the würstelstands in Vienna and grab an unctuous Viennese sausage, slick with grease, to eat. It’ll satisfy you to no end. Seriously. Street food in Vienna is immensely good.

But through all the wurst eating (no pun intended), we remembered watching Ishai Golan downing a monster wiener sausage in one of his Street Food episodes. The episode was on Vienna, of course. After a bit of research we found that Vera Tondl’s LEO happens to be the oldest würstelstand in Vienna, and boy does she deliver. Go for the Hot Dog Käsekrainer. Without a doubt the best hot-dog you’ll eat. Yes, America, I went there. Sue me if you want, but a monster cheesy dog stuffed into buns, Viennese-style is just plain awesome.

HotelsMap
A very comfortable and clean hotel for those on a budget. The staff is super helpful and the breakfast, that's included in the cost of stay, is excellent. The Atlantis Hotel is located on a busy street and is adjacent to a popular shopping mall that includes eateries of all sorts, supermarkets, fashion stores and the mall is also known by all taxi drivers, so getting around is a breeze.