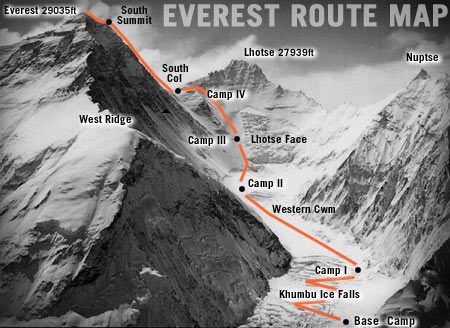 Mount Everest (8,848 meters) stands on the border between Tibet and Nepal in the Himalayan Mountains in Asia. The ever enthralling peak is the tallest mountain in the world. It is also the king of the eight-thousanders in the Himalayas. Himalayas — the tallest mountain range in the world — span across six countries: China, Nepal, India, Pakistan, Bhutan and Afghanistan. Geologically speaking - Mt Everest is only about 60 million years old.

1.      In 1856, the mountain was named after George Everest, a retired Surveyor General who never even saw the peak 2.  The Trigonometric Survey of India in the 1850s confirmed Everest’s existence 3. The last year that no one climbed to the Everest summit was 1974 4.      The Indian mathematician Radhanath Sikdar was the first to put a figure on the height of the mountain. He calculated that it reached 29,002 feet (now adjusted to 29,035 feet), the highest point ever recorded on earth 5. The worst year on Everest, in terms of deaths, was 1996 when 15 climbers died in the season, including nine in a single incident (documented in Jon Krakauer's book, 'Into Thin Air'). A close second was as recently as 2012, when 11 climbers lost their lives. Hundreds of corpses are thought to be still on the mountain 6. The most dangerous area of the mountain is often considered to be the Khumbu Ice Fall, which is particularly dangerous due to the unpredictable movement of the icefall 7. The youngest person to reach the summit is 13 year old Jordan Romero. In May 2010, the young American broke the record previously held by 15 year old Ming Kipa of Nepal 8. It normally takes around 12 hours to climb the final mile from the highest Base Camp to the summit 10. The first tweet from the summit was sent by Kenton Cool in 2011. On one of his many trips to the top,he tweeted: "Everest summit no 9! 1st tweet from the top of the world thanks to a weak 3G signal”