8 Timeless Havelis That Make Rajasthan The Cultural Capital Of India

Truth be told, my fascination with the royal land of Rajasthan began with my occasional visits to the Jaipur Literature Festival and the few hours dedicated to short city tours after the fest hours. The evenings spent at Johari Bazar hunting for the best of Meenakari jewellery, at Tripolia Bazar and Chaura Rasta for brightly-coloured lac bangles and at Sireh Deori near Hawa Mahal for Rajasthani handicrafts, make some of my best travel memories.

In the heart of the capital city of Jaipur, Bapu Bazar is a local market with a fragrance of its own. The 5000-year-old art of distilling traditional perfumes (ittar/attar) can be witnessed by following the hypnotising fragrances in local markets.

These traditional artifacts are also the signs of the prospering trading community in Rajasthan. The traditional havelis of Rajasthan have been the ancestral homes of the Marwari business communities that prospered during the 18th and 19th century through growing trade relations. Believe it or not, these palatial ancestral homes of the traders have been the focal point of prospering art, architecture and culture in the land of the royals.

Here's my ultimate Haveli-hopping guide through different cities of Rajasthan giving you a sneak peek into the history of these thriving cultural hotspots in the land of the royals.

The havelis of the Shekhawati region have set a benchmark for excellence in traditional art and architecture in Rajasthan. The Mandawa Haveli was built in 1896 by the 15th ruler of Mandawa, Thakur Bhagwant Singhji. The rich interiors with painted frescos, jewel-adorned pillars and ceiling are indicative of the prosperity of this business clan with ancestral havelis located in this trade route between Delhi-Bikaner.

Local Cultural Scoop: The Shekhawati region is also known for the locally-crafted solid wood furniture and the traditional Rajasthani Mojadi leather footwear. These can be your souvenir picks while visiting Shekhawati.

Jhunjhunu district's small Dundlod town is home to the haveli of Seth Arjun Das Goenka. The haveli was first constructed in 1875 and is an architectural marvel showcasing the life of the merchant clans of the region. The old artifacts, clay figures of merchants and traders depict olden times when the region was flourishing with trading communities that settled here. The haveli is separated into two different quarters, the mardana or male quarter and zenana or the inner female quarters.

Local Cultural Scoop: The haveli also serves as a museum giving a sneak peek into the lifestyle of the merchant community of Dundlod.

Built in the 18th century, Patwon ki Haveli is a complex of five havelis built side by side. The complex was constructed by Guman Chand Patwa, a famous trader of textile and precious metals. The ingeniously designed wooden ceilings and mud floors of the haveli still serve as a great means of temperature control inside the magnificent structure. The ornate paintings on yellow sandstone add to the grandeur of this cluster of havelis.

Local Cultural Scoop: Jaisalmer is known for the mirror-work embroidered garments, carpets, puppets and silver jewellery. These dexterously made handicrafts are present day symbols of Rajasthani craft across the globe.

The intricately-carved floral patterns and lattices represent the life and times of the 18th century royals in Jaisalmer. This haveli served as the residence of Diwan Mohata Nathmal, the erstwhile Prime Minister of Jaisalmer. It was commissioned to be built in 1885 by Maharawal Bairisal

Local Cultural Scoop: A clash between the two architects, who were brothers, during the construction of the haveli can be spotted in the architectural differences in the two sides of the haveli, which are constructed differently.

Alsisar Mahal is one of the many converted boutique heritage hotels in Jaipur that have preserved the splendour of the past. This mahal was built in 1862 and is traditionally owned by the Kachawa clan of Rajputs. The boutique hotel also hosts Rajasthani puppet shows and traditional dances to bring occupants closer to the culture of the region. Some of the must try food items during your stay here include the Rajasthani dal, baati, churma, ghewar and mawa kachori.

Local Cultural Scoop: Traditional perfumes (ittar/attar) at Bapu Bazar and lac bangles from Nehru Bazar of Jaipur make for some of the widely exported items from Rajasthan to countries across the globe. 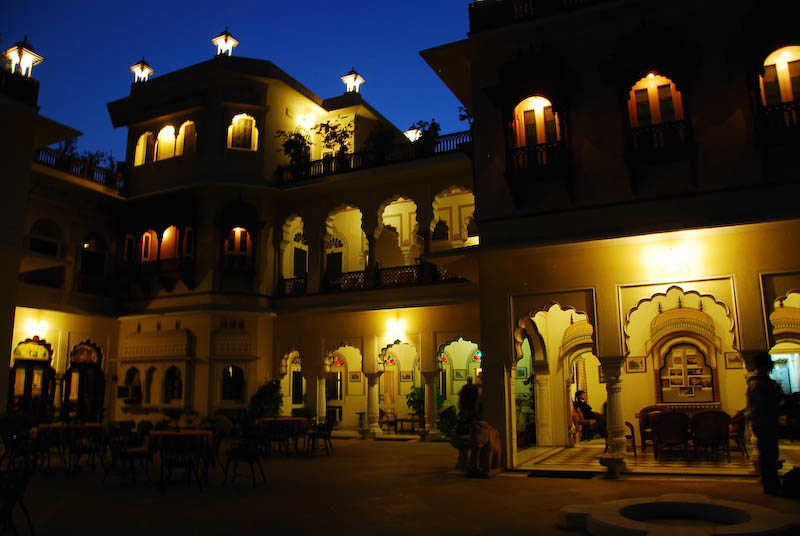 Erstwhile prime minister of Jaipur, Rawal Sheo Singh built the Samode Haveli around 175 years ago. This ancestral mansion was turned into a boutique hotel in 1988, opened for guests to explore the luxurious artwork showcased in every corner of the haveli. The intricately-painted dining room, airy inner courtyards and the elephant ramp at the entrance serve as symbols of the grand lifestyle of the Maharajas who walked down these courtyards. 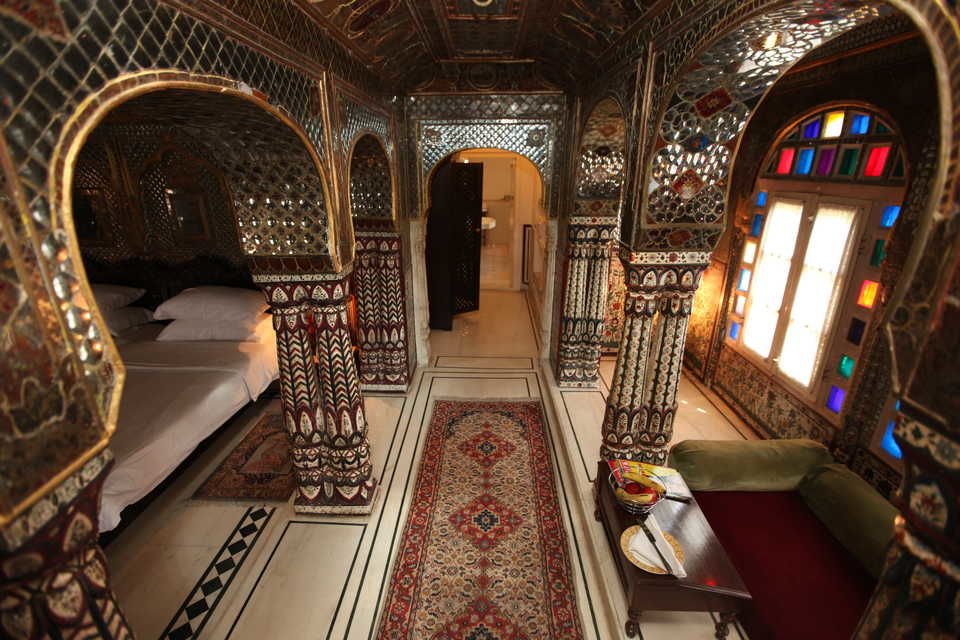 An important addition to the list of the havelis turned into boutique hotels is Piramal Haveli. Built in 1924 by Seth Piramal Chaturbhuj Makhania, this Rajasthani haveli showcases a more modern approach to traditional architecture. Seth Piramal was a trader of silver, cotton and opium and his haveli in Bagar is a Rajasthani-Italianate structure with gigantic European-style pillars connecting the eight rooms around a centrally-constructed courtyard. The murals on the walls are indicative of the British influence on the lifestyle of the wealthy local merchants and the craft they promoted through architecture.

Local Cultural Scoop: Witness the festival of Gangaur arranged by the Rajput families of Bagar during the month of March-April. 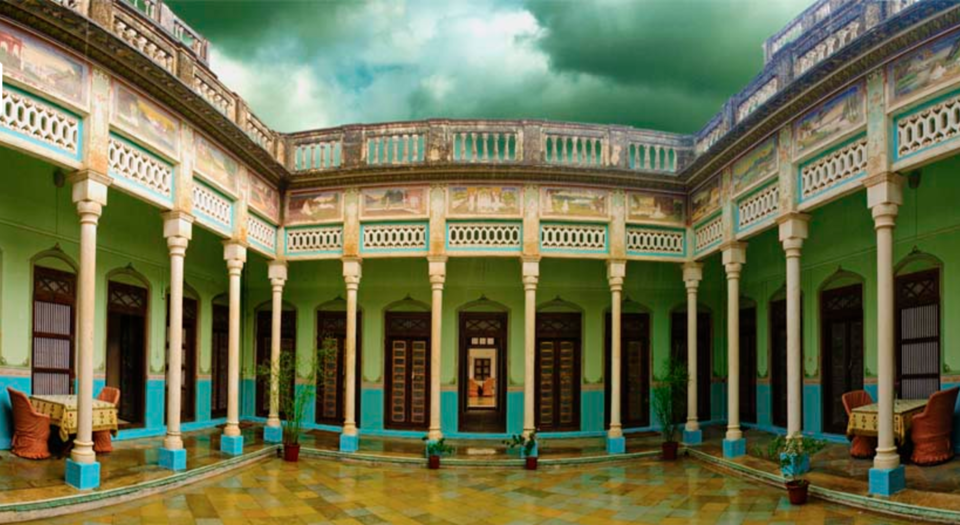 The historical capital of the kingdom of Mewar is home to the majestic Bagore ki Haveli. It was built by Amir Chand Badwa, the then prime minister of Mewar in the 18th century. The haveli is located at the waterfront of Lake Pichola at Gangori Ghat and the palatial structure is composed of more than 100 rooms, intricately-designed balconies and walls with murals indicative of the royal times.

Local Cultural Scoop: The haveli also has a museum showcasing the artifacts of the erstwhile dynasties such as jewellery boxes, costumes, vessels, hukkas and glasswork artefacts. 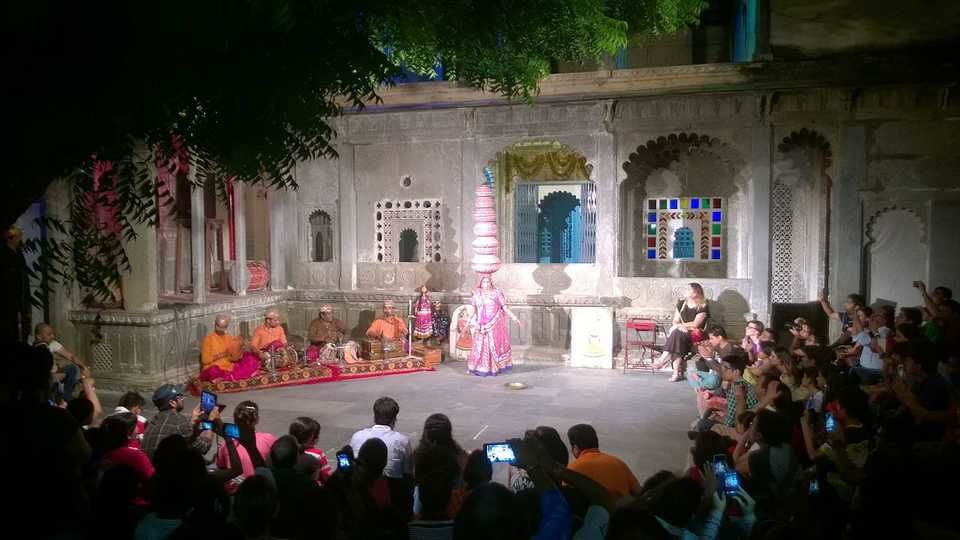 Exploring the land of royals through their ancestral homes can give you an inside scoop on the cultural nuances of this historical region of India.

Disclaimer: This article has been developed by Tripoto based on information available as of November, 2017. Travellers are advised to check current weather conditions, timings, prices while planning their trip.