Flight of fancy over Slovakia 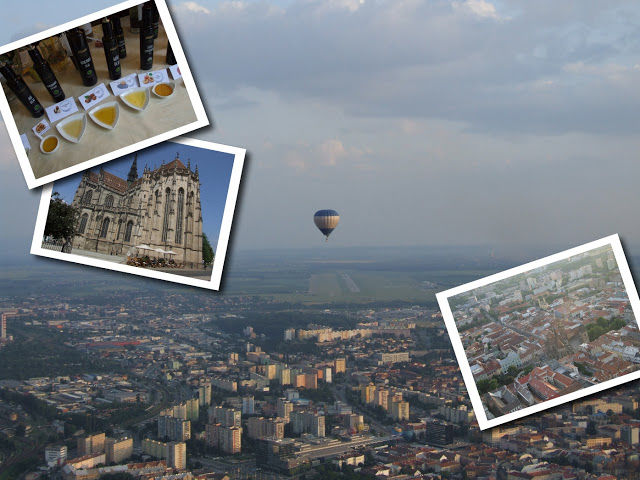 We had waited for the phone call all day, but it wasn’t looking good. The wind is too strong, the people at the airport’s control tower had advised, we’ll call back in an hour. And so it went, hour after hour until it looked as though all hope was lost.

Then, suddenly, at 7pm, the phone rang once again, get over here as fast as you can, we’ve been given the all-clear. Five minutes later, out of breath from the sudden dash from the hotel lobby, we were standing outside a shopping centre in the heart of the Slovakian city of Košice as a small army of workers busied themselves around us. Diesel powered fans blew cold air into brightly coloured canvases, ropes were checked and re-checked, giant wicker baskets were righted into position and burners roared into flaming life swelling the body of the canopies. “Ok”, the safety man shouted over the roar of the burner, “listen carefully”. He barked a list of do’s and don’ts; we nodded our agreement after each one, and signed our names releasing him of all responsibility. “Passengers!” someone else shouted and in a flash of hurried movement four of us were bundled tightly into a basket slung beneath a giant onion-shaped dome of brightly coloured canvas. The pilot, a large Romanian man named John, stood in the centre of the basket, raised a meaty arm above his head and a jet of searing fire propelled us into the air. Up, up and away

When the noise and the heat of the balloon’s burner (I hadn’t expected such heat) were quenched, the balloon rose silently into the evening sky.

It wasn’t my first time in Košice; two years earlier I had visited when the city celebrated its role as joint European Capital of Culture, when I had taken an instant shine to its fairytale good looks. But no matter how appealing the wide terrace-lined streets looked from terra-firma, the city took on a whole new appearance from the sky. Kosice coat-of-arms with the tower of St. Elisabeth's Cathedral in the background
The red-tiled roofs of the old town glowed with the richness of flaming coral; the gold encrusted gothic spire of St. Elisabeth’s Cathedral – the largest church in Slovakia – reflected the sinking sun’s rays in brilliant flashes, fountains played in mediaeval courtyards invisible from the ground, as cars, trains and people took on the appearance of mere toys.

Fading away behind and beneath was the green lung of the metropolitan park where for three days the city was celebrating its annual gourmet festival drawing visitors from across the country and over the nearby border with Hungary. We slipped silently over the Kunsthalle, a one-time urban swimming pool reimagined into a new life of art, music and literature.

Kosice from the air

John the pilot broke the silence and the leaping flame of the burner drove us higher into the cloudless sky. In our wake the other balloons from the convoy were rising slowly heaven bound.

Beyond the old city the red roofs gave way to commerce and industry. Further still and the squat blocks of the old soviet-designed dormitory towns, the homes of the workers who fuelled the city’s steel industry, were painted kindly in the last glows of orange sunlight. On a green hillside overlooking it all the ruins of Košicky Hrad – the triangular towered fortress whose mysterious origins the experts are still attempting to unlock – lay hidden in the thick forest.

For anyone who hasn’t experienced balloon flight the one thing which strikes you most is the silence. Because you are travelling on the breeze there is no wind to ruffle that silence. Rising from the ground you can hear the barking of startled dogs and even the voices of humans in normal conversation. John fires the burner again, breaks the quietness and we rise even higher.

Up here there is time to contemplate where you are. Beyond the city’s limits a wide flat plain unfolds in a green chequered pattern of crop, meadow and forest, until its gallop is halted, at first by the neatly rolling foothills and then the once volcanic mountains which embrace the city like a defensive wall. Beyond that wall lie the vineyards of Slovakia, another hidden gem awaiting discovery by the world, another adventure still ahead of me.

The sun has set behind the hills and the pink tinged sky is now alive with balloons; in the distance you see the flash of fire beneath the rainbow canopies and the delayed sound of the flaming burners. Beneath us in a forest clearing a doe and her fawn continue grazing, unaware of our ethereal presence in the skies above. Then as the balloon loses height, the forest gives way to tram lines of crops where a fox patrols between the corn rows and a rabbit sits unperturbed among the vegetation unaware of the danger which lurks so close. From up here the invisible becomes visible.

It is time to land and John knows what to do. We descended slowly towards a flat meadow in the distance. The expert pilot controls the burner, and with quick deft blasts of flame the balloon rises just enough to scrape the treetops and place us where we want to be. The landing is bumpy but we are down, back on terra-firma, our exploration of the sky complete.

The end of a once-in-a-lifetime experience

In the evening silence as the crew dismantled the balloon and packed up to leave I knew I had just experienced another once in a lifetime moment. You may not be lucky enough to experience the skies over the beautiful city of Košice, or over the green countryside of Slovakia, but trust me; you will love the ground just as much as I did. Citadela Wine Salon & Gallery – Experience an evening of wine tasting in a beautifully designed former bakery. Slovakian wine isn’t on every menu just yet, but it should be – www.citadelawine.sk

Visit Košice – All information on what to do, see and where to go in and around Košice can be found here – www.visitkosice.eu In 2013 Košice was European Capital of Culture - since the legacy has remained and grown.