Leh Travel GuideLeh TripsFriends With No Ends To Love And Caring November 25,2019

FRIENDS WITH NO ENDS TO LOVE AND CARING NOVEMBER 25,2019

I believe when we travel we not only get immersed in the beauty of the place but also the culture, food and people. I personally love to indulge in talks with local people around us whether it's a tea stall owner or a potter at a hotel. They have different stories related to life from their lenses.

When we visit a place we are full of praises of its natural beauty,culture,food and local stuff. But we often forget the local people there. Who touches our journey in every aspect right from stepping out of the aeroplane to hotel check-ins to buying local stuff.
My first brush with the local was when I landed at Leh airport and boarded the bus when I entered the bus first few seats were occupied. I didn't wanted to sit at the back. So sat at the vacant seat near the driver. As was I mesmerized by the beauty .I was like awww finally I am here.The driver politely greeted and asked us not to exert ourselves.
After collecting the luggage outside the airport we met Nazir and Altaf,people on wheel to drive us around for next 10 days.
Nazir was carrying a playcard with my name,when he saw me ,he smiled and greeted 'Jullay' and I also nodded   back with a halfsmile🙂. After loading our luggage the entire group got divided into three cars.
Nazir enquired about our comfort in journey and the locations we will be covering on our way to Kargil. It was all technical details. It was all normal chit chat among us.. When Nazir asked about our breakfast preference..we being vegetarians and no onion and garlic takers during navratri...was a really hard task to find such eatery .After search were brought to a roadside eatery in Nimboo ,though small but pure veg.We had a hearty brunch..We enquired Nazir about their food and he soberly replied it's done. They paid their own bills. Whenever I offered any dry snacks we had in car..he politely refused or on insisting took few pieces.At the end of first day we checked into our hotel and Altaf and Nazir made sure they we were checked in properly.Our hotel was a small property but it was full of amazing people who served us, right from the owner to the steward. Extremly sweet people just a call away at 2degree temperature. When I thanked them for serving us at this cold temperature,sonu smiled and said ,madam,this is nothing to minus 10 or -15 degrees. His words shivered my heart more than the cold wind blowing.
Next day we started getting familiar to our mascots on wheel.On our way to leh at the sight of mountains with colour changing vegetations green to red to yellow I was super excited. Whenever found anything amazing to my eyes..just yelled and got mad at the beauty to jump out of the car.Numerous of clicks followed.Nazir and his companions patiently stopped and never hurried although it became dark.

It was a long tiring day it was dark outside and we were quite and songs were playing it was soothing .It was two more hours of drive to leh. It was already 9:00pm.Then Nazir slowly asked ..do we have chewing gum.I felt he was tired and getting monotonous of driving in dark.Then I initiated talks with him. At first he was shy and replied in small sentences. When I asked him about his family he instantly became bright and showed his children's photo. At the mention of his wife..he blushed ,then everyone present participated in the conversation.He asked me whether mine was  a love marriage or arranged.On countering he said ,by looking at us( Aditya and myself)it seems love marriage,it was hard for him to believe that we were married for 18 years.We left his question unanswered and poked him about his marriage..he slowly opened up about his life and wife,after dating 8years and running away from home with his childhood sweetheart to get married.The full darkness outside cannot compare with the energy in our car..We were listening songs humming the words in our own tunes.jokes ,chitchat and fun with Nazir made us forgot to keep the pace of time.It seemed we reached Leh in no time.
Next day onwards there was a different chemistry with Nazir and Altaf. Kids grew found of them even we adults made them a part of us.Technical talks were replaced with emotions.Nazir Bhai( I fondly call him)helped me find some best coffees in ladakh.Being a coffee lover and an addict for a  cup of perfect  coffee it was fun to share my coffee stories with him.

Altaf bhai was a gem, in taking photographs he never missed any angles and patiently gave his ears to my kiddos..still my sons miss him.There were times he drove our car. ..shared his life and family story.He was full of praises for his wife for handling her job,home children and their education so well.He told there are times he is away for a month from home,doing trips.When I talked to them I felt though they are happy in their life and cheerful but a part of them longed for their family.Both of them were sweet and cheerful never tired or irritated .Believe me travelling with a big group and enamorous breaks and photo breaks never made them impatient.We travelled the terrains in dark but never felt unsecured.When I visited Turtuk local women working in fields offered us Thupka. Welcomed to her garden to pluck fresh veggie.

Their smile and talks were full of innocence.People were more realistic and optimistic. Although I was in love with Ladakh even before comming down but now I fell for its people more than the nature. Both the people accompanying us made sure we were comfortable and were specially very caring towards children.
Whenever I got down in water in shyok or in pangong Nazir Bhai made sure to be part of our madness .
Altaf Bhai never missed a click.At the sight of water and rocky boulders I was instantly mad.. enormous excited shouts on seeing the mountains and the colour changing landscape Resulted in numerous breaks with thousands of photos in comming days.
When we cooked at a local homestay Altaf Bhai helped in serving. At homestay we found that they would have dinner after us..my husband insisted and had food together.That day onwards we all sat together for breakfast and lunch and dinner.We were vegetarians..both of them never ate non veg during the trip..I often joked bhaiya aap Jain bangaye.Our relation was not of driver and customer.But of friends,who took care of us and roamed with us.

During trip Nazir shared that my numerous queries over the phone left him thinking of the crazy stuff in me and how they will handle. But he admitted he had never encountered a group like ours in his long driving years.
Lovely people with brightness for life despite their own problems.Its really hard to survive in such terrains in harsh winters.Their income is seasonal.once the tourist season is off they survive on their savings.At times months away from family,working harder for children to provide them a healthy life with education at good schools and colleges ,the thought itselfmade me sulk.But they were jolly and full of life.
On the day of departure I was left teary eyed. The feeling of leaving the loved ones  encrypted.we promised to stay in touch and hoped to visit sometime down the years when I will get old and come with my daughter in law,then Nazir would ask her, "how u handle Ur crazy mother in law," ...haha.we shaked hands and hugged and bid adieu to the wonderful people with whom I felt secured and at home. Not only I took back thousands of photos in my camera but lifetime of memories with Nazir and Altaf. It’s almost more than a month I am back from ladakh but we still share photos and chitchat over wattsapp.
I Who went as a starnger made  friends out of complete strangers. 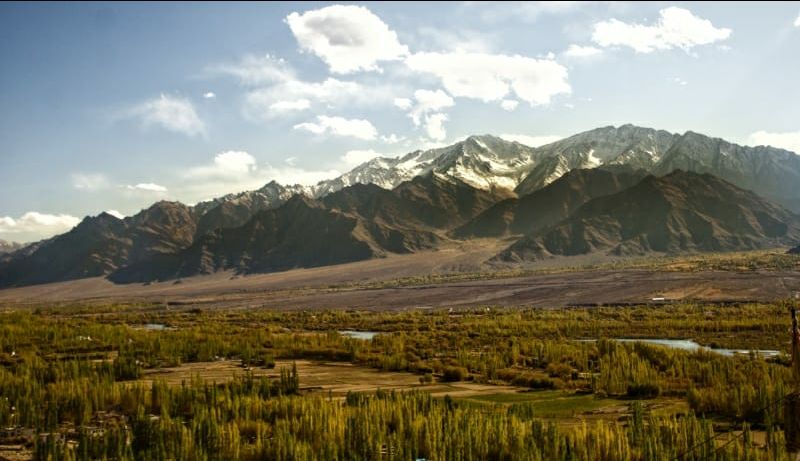 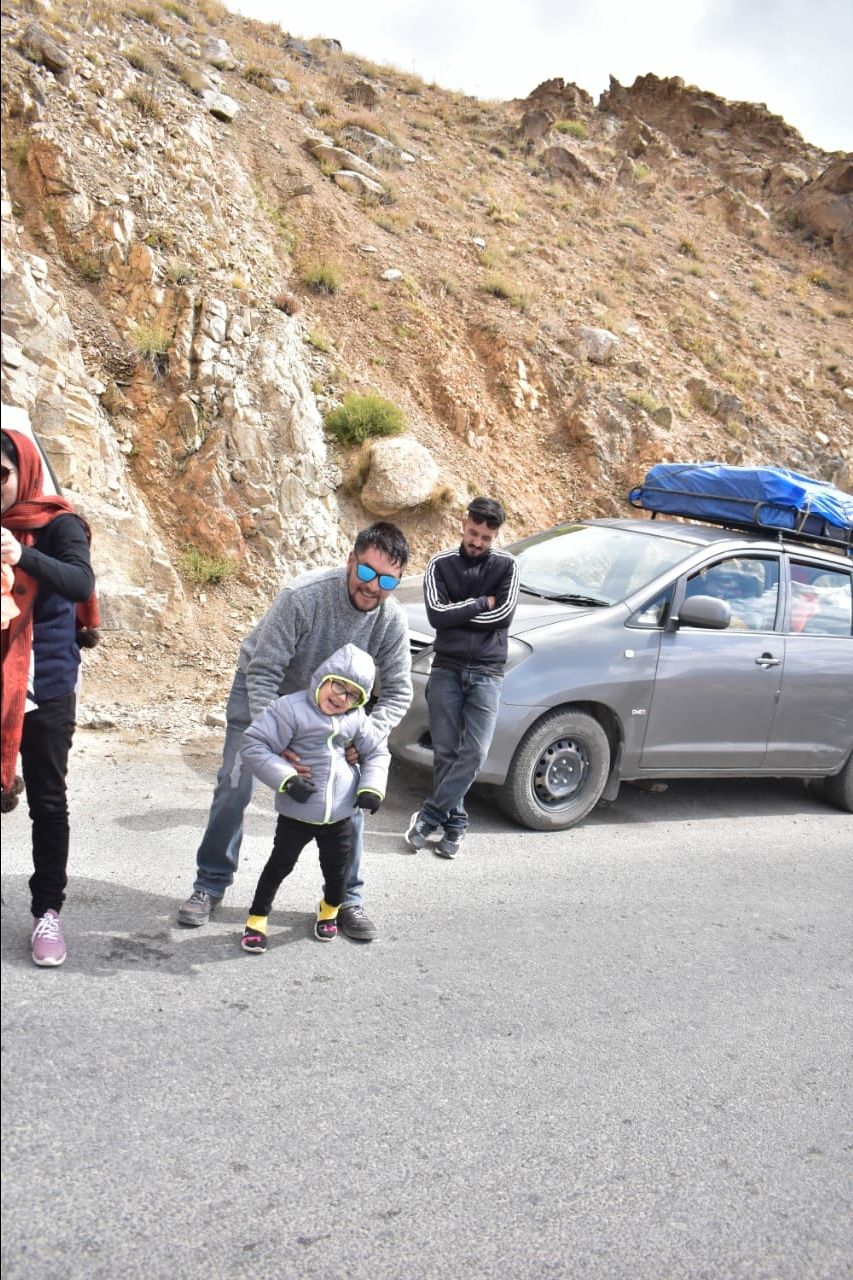 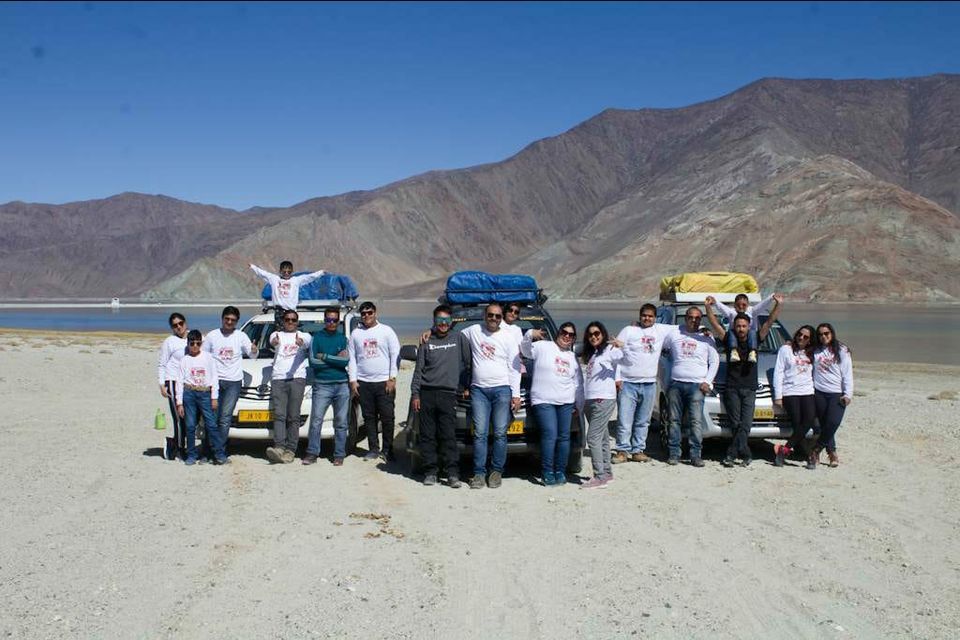 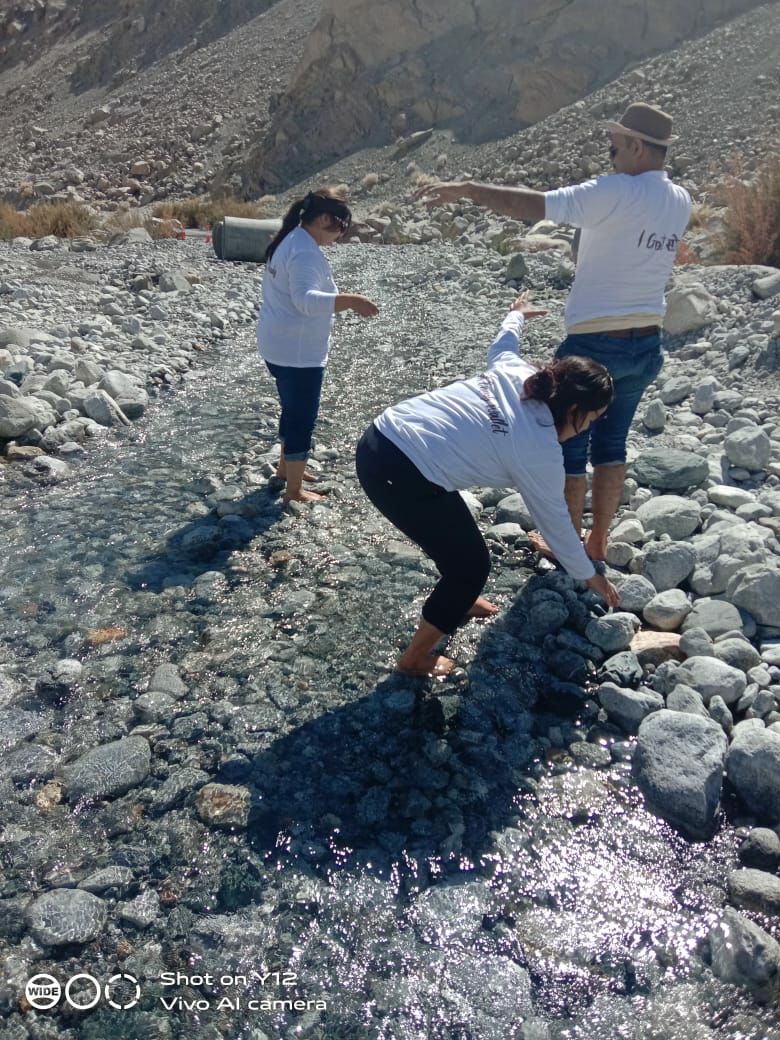 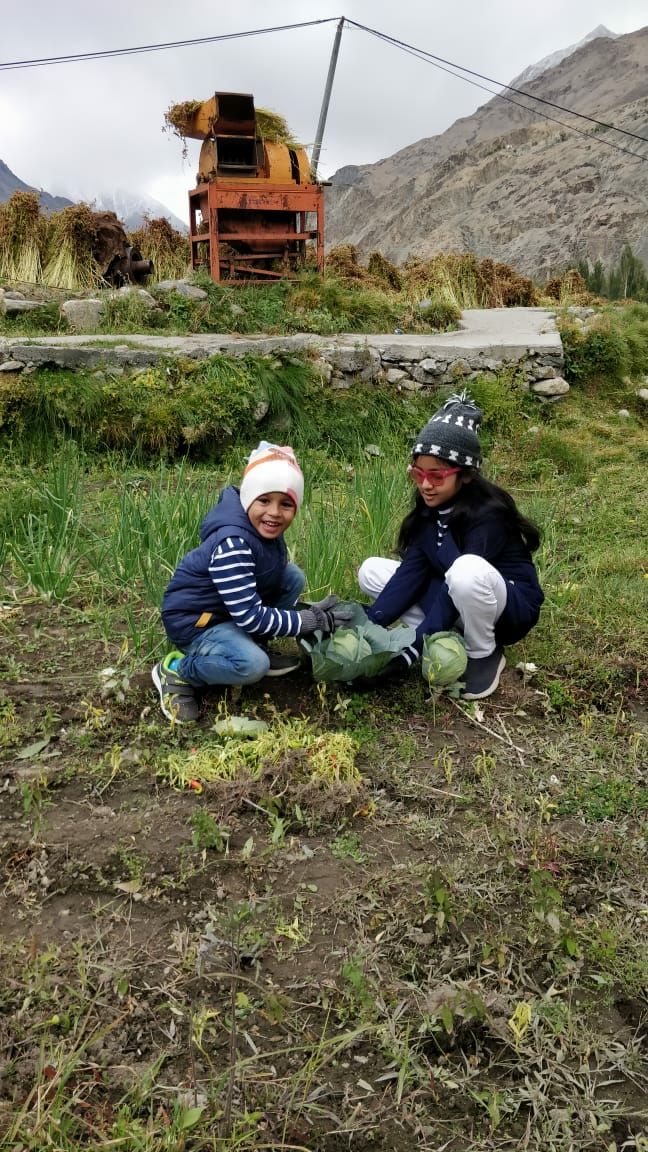 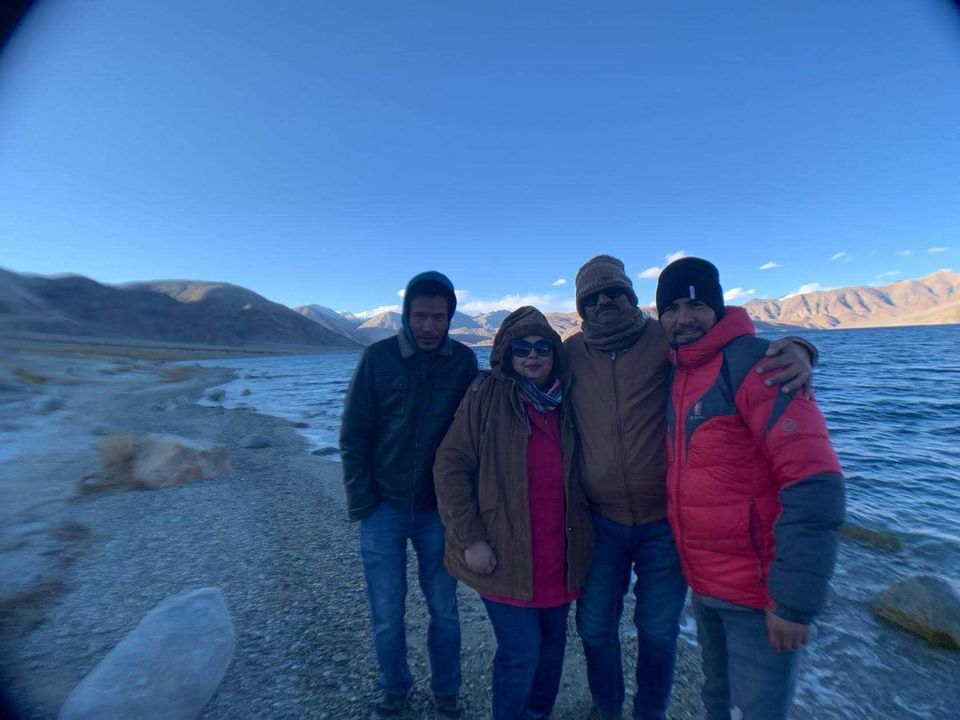 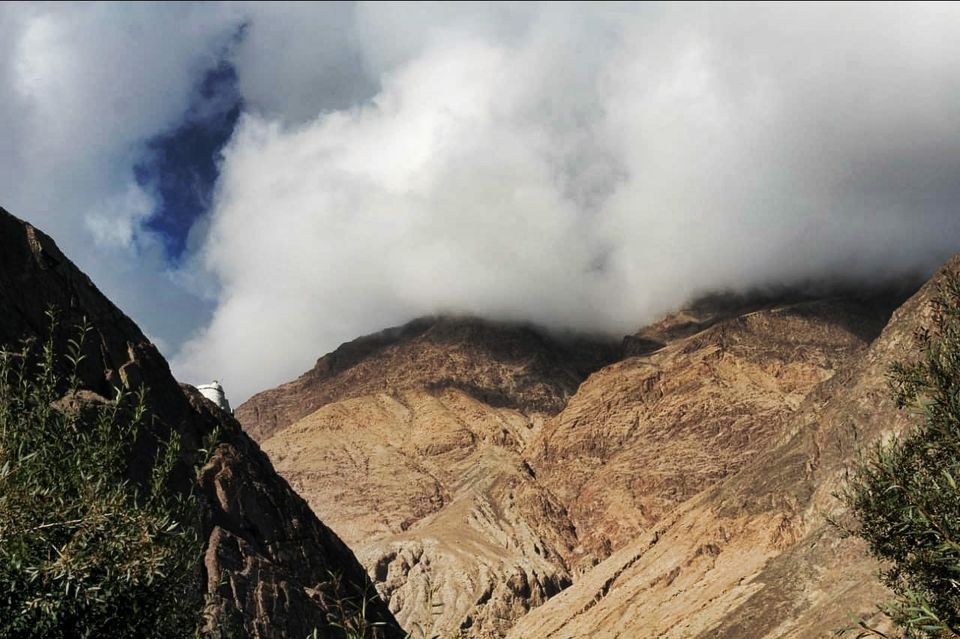 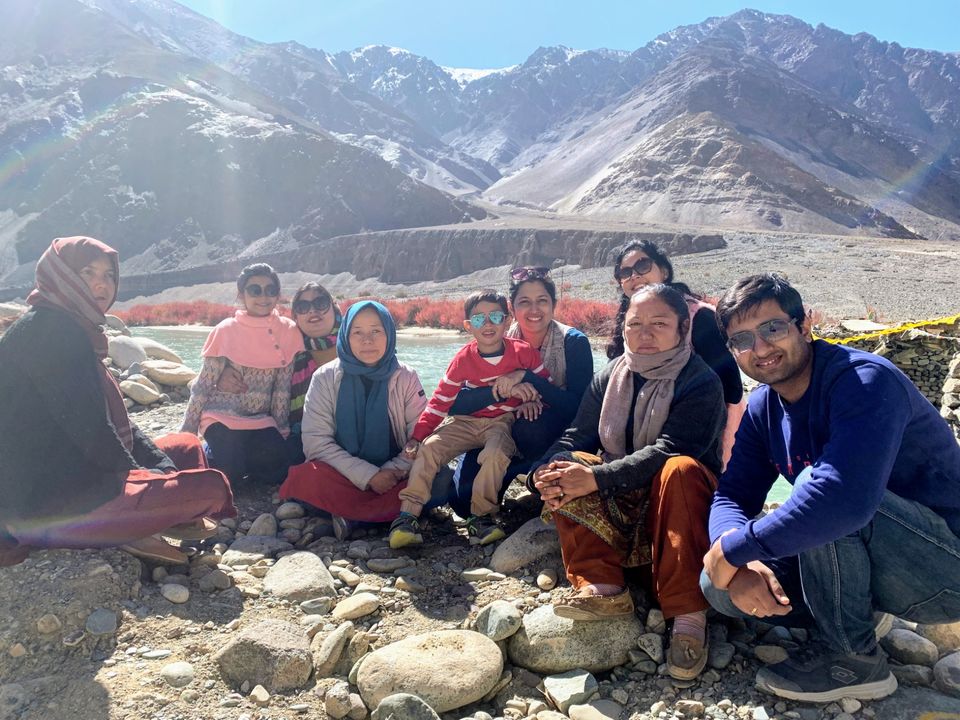