Ganesh Visarjan is the last day of the Ganesh festival. In Mumbai, it’s a day of long processions filled with pomp and splendour when the Ganesh idols are taken to the sea and immersed in the waters there.

Crowded, noisy yet full of life – with order in the chaos, the Ganesh Visarjan is quintessentially what Mumbai is all about! 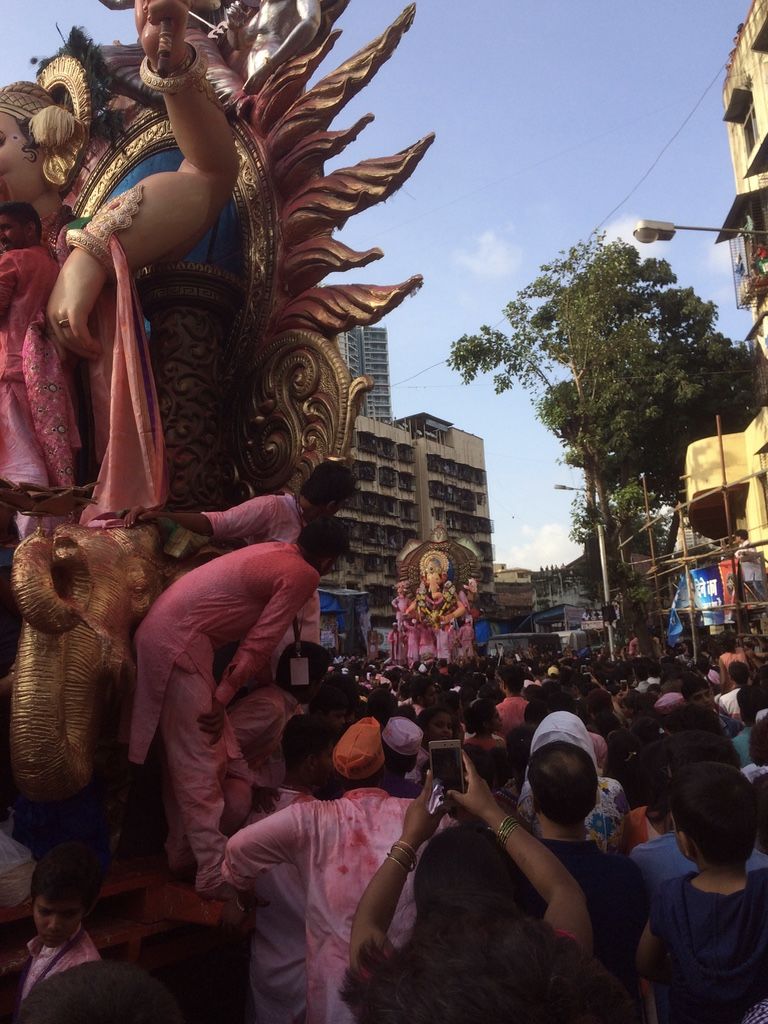 The streets of Mumbai turn into a mega congregation of people, dance, music and colour. 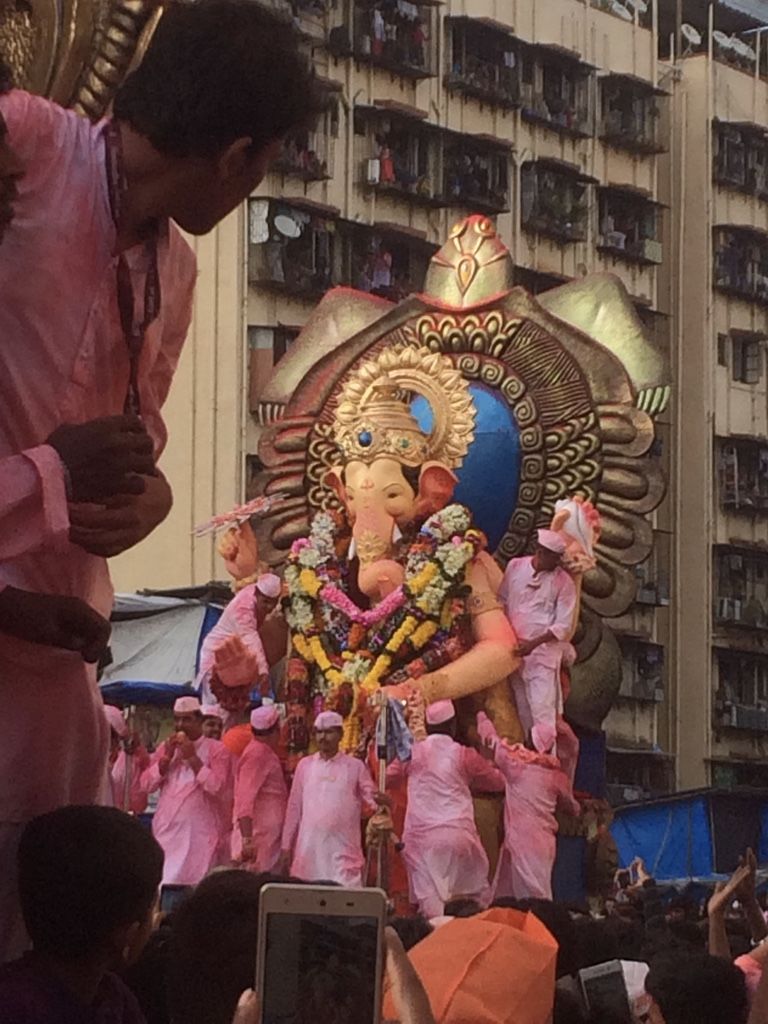 As the sun sets into the Arabian sea, more and more Ganesh idols show up for immersion. In the fading evening light, all you see is a sea of people.

The excitement and the energy defy how crowded the beach actually is. It feels like the Ganesh idols, resplendent with their charming demeanour, are showering a bountiful of blessings on the devotees.

The journey of the Ganesh idol from the beach to the sea is worth experiencing. The wheeled platform on which the idol sits is pulled by the organisers. This makes the idol rush towards the sea at breakneck speeds. However, at times the idol changes direction. A crazy scampering of the crowds follows, to get out of its way!

While the Ganesh visarjan day in Pune – a neighbouring city of Mumbai, is about culture and tradition, in Mumbai it is about the crowd participation and management.

It is also about “Lalbaug cha Raja” – the biggest celebrity of Mumbai.

Frenzy. The only word to describe everything surrounding the “Lalbaug cha Raja” (the king of Lalbaug).

During the ten days of the festival, this particular Ganesh idol is visited by over a million devotees. Those who can not make it in the ten days try to catch a glimpse on the visarjan day. 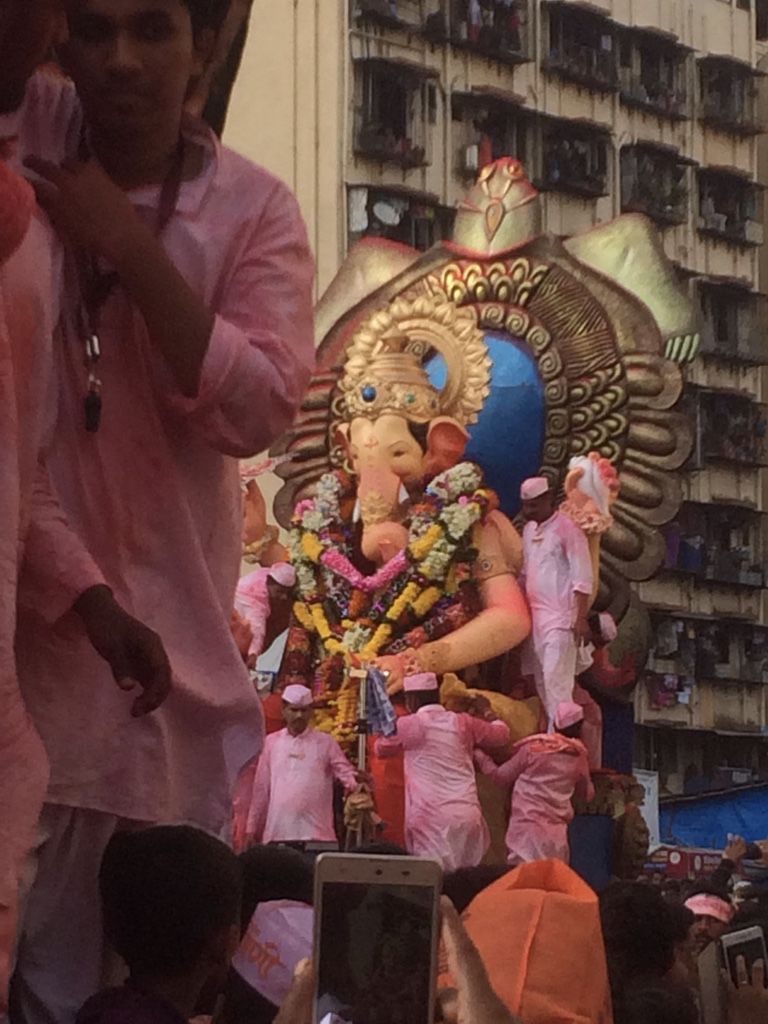 As the idol proceeds ahead, the organisers shower the crowds of devotees with garlands and sweets (prasad) as blessings of the Lalbaug cha Raja. Their expressions of sheer bliss on catching hold of these is a sight to be seen to be believed!

Managing the crowds of this magnitude (on the entire visarjan day and particularly for the Lalbaug cha Raja) is not for the mild hearted.

Hats off to the police, armed forces and the volunteers for a performing such an arduous job so well.

Each Ganesh idol has a story to tell

The Ganesh idols come in all shapes and sizes. Each one tells a story. This multi dimensional character of Lord Ganesh is what endears him to his devotees. As the night draws to a close, chants of “Ganpati Bappa Morya! Pudhcya varshi lavkar ya!” (see you soon the next year) fill the air.

By the glittering lights of Mumbai’s famous landmark, the Queen’s necklace, next to the Arabian sea, the city says its final goodbye to Lord Ganesh.

It is a great atmosphere. An experience we recommend to everyone visiting Mumbai.

Some tips for enjoying the Ganesh festival in Mumbai

Be mentally prepared for humongous crowds. You will be pushed around at times. Not necessarily by someone meaning harm.

Try to go in a group. And stick together. It is easy to be lost in these crowds and will be difficult to trace your companions if you lose sight of them. It is difficult hear the mobile phone ringing in such crowds.

If you feel like joining in the crowds dancing, join in where there are families and women.

Dress comfortably (including footwear) and modestly.

Do not carry valuables.

Carry water and some food with you. The restaurants in the areas surrounding the procession and immersion are closed on the visarjan day.

Accept that some customs and practices will sound unreasonable. But in the middle of the festival is not the time to challenge these.