Australia Travel GuideAustralia TripsGokarna - The Alluring Place Where Three Of Us Almost Died.

Gokarna - The alluring place where three of us almost died. 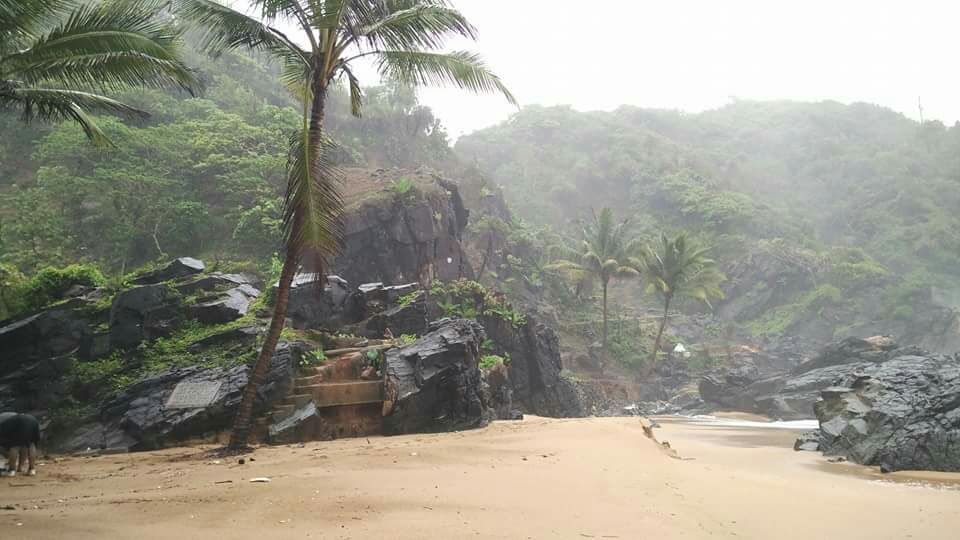 Though it seems like a scary trip, the adrenaline rush we had is unmatched. Trekking in Gokarna, in the monsoons is one hell of an adventure.

It was mid June when almost 20 of us signed up to go on this trek organized by 'The Great outdoors.' A bunch of strangers who had the common passion of hiking and trekking were brought together by the organizers to experience a unique episode.

We reached the Om beach at around noon after a half-day bus journey. Our destination that day was the Paradise beach, which supposedly was populated by foreigners and abandoned now as they were asked to leave. The Gokarna police evicted them as they assaulted many Indians who visited the Paradise beach.

Paradise beach is a secluded beach which is surrounded by cliffs on three side and the sea on the other. It had ruined shacks and graffiti all over. There is no direct leveled road to go to this beach, one has to hike for 3 kilometers from the Om beach, over the hills, in the woods and beside the rough sea to see the Paradise, which it indeed is.

The sea was at its highest violence level on that rainy day. We walked halfway from the Om beach when we reached the Hell's beach that does complete judgement to its name. Steep rocks which were being washed away by the waves every few seconds. It was hard to cross this obstacle without being washed away by the sea. A few of us including me fell into sea from the rocks and I thought it was the last day of my life. I held on to the slippery rocks not to get pulled into the ocean. I was pulled out of it by one of the organizers with just a few scratches.

A few more steps and we were there, The Paradise. It was a scenic beach. It was still raining when we put up all the tents and when done, it was the time to jump into the sea. I kid you not, all of had to be so careful not to get pulled into the sea by the strong currents.

Despite all the efforts, a man got pulled into the sea and had a hard time finding his was back ashore. He was flowing towards the sharp rocks when my brother, the organizer jumped in to save him. My heart slipped at the same moment when he slipped and fell on the rocks. I had an idea to go after him and I had to ignore it as it was stupid. I could not have possibly saved him and moreover, would put both our lives in danger.

After a few minutes of heart-in-the-mouth moment, my brother managed to save the man who had fallen but he himself wasn't to be seen. My heart stopped for a moment and then, there he was, walking out of the sea with valor flashing on his face. The man who he had saved ran to him, hugged him, and broke into tears of gratefulness. That is the moment when I was proud of my brother yet extremely angry. I broke into tears with the fear of losing him.

After this moment passed, we all rested in a natural pool that was a few meters away from the sea till the sun had set. It was still raining so we couldn't set up the fire and hence instantly passed out in our respective tents so that we can can be ready for the next day.

We started to the Sathodi falls the next morning. The hurdles were, a few kilometer trek, a delta to cross, a bus journey and a beautiful pathway. There was a dog which followed us all the way from Om beach till the moment we boarded our bus to Sathodi falls. And there we were, the beautiful Sathodi falls and none of us could resist to jump into the water despite the presence of dozens of blood sucking leaches. The leaches caught a few of us but they were promptly removed by the organizers. We did not want to leave the place but all of had to head home for our favorite Monday morning blues.

This was the end of our beautiful two-day trek in Gokarna. We all then caught the train and went back to our daily mundane lives.

Check this Picture Diary out and you will know what I am talking about.

SPONSORED
Want to book a similar trip?
I accept the Terms of Use and Privacy Policy of Tripoto.
SPONSORED
Related to this article
Weekend Getaways from Gokarna,Places to Visit in Gokarna,Places to Stay in Gokarna,Things to Do in Gokarna,Gokarna Travel Guide,
Tagged:
#gokarna#trek#hike#paradise beach#hell's beach#adventure#beach#rain#sathodi falls#waterfalls