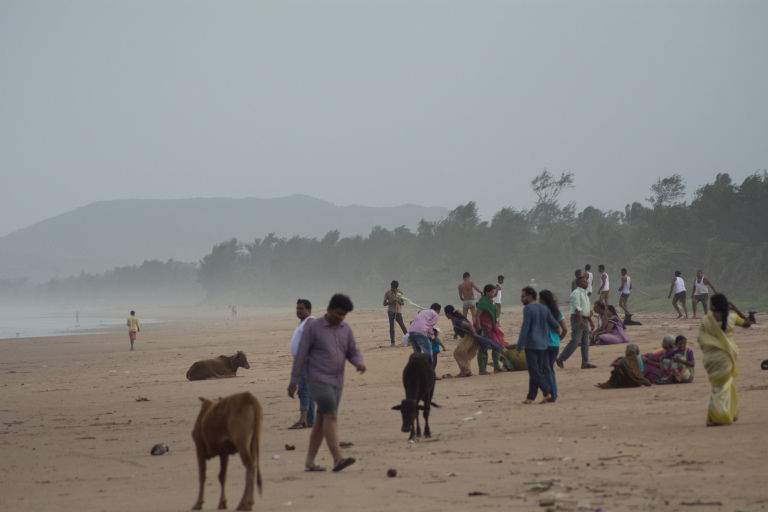 Gokarna, the place located on the north-western side of Karnataka facing the beautiful Arabian Sea. The place is accessible by road, and rail. The railway station is named as Gokarna Road (GOK). By road it is well connected to Mangalore, Bangalore , and Goa. The nearest airport to Gokarna is Dabolim (Goa) around 150 Kms.

The major attraction in Gokarna is the beaches. Some of the famous beaches are listed below

Temples like Mahabaleshwar temple , famous cafes like Namaste cafe are situated here. The place offers a lot of trekking spots. The beaches can be trekked from Paradise beach to Kudle beach (Paradise -> Half Moon -> OM beach -> Kudle Beach). On the shore beach we can see the famous Namaste Cafe. The Cafe was fully occupied by foreigners.

We can be able to see many foreigners along the streets of Gokarna. The streets are like a typical Brahmin Agraharam, with houses on both the sides leaving an sufficient amount of space for transport. Many short cut roads are also there. The entire place they wont be serve non-vegetarian foods. The hotels along the road provides very delicious foods but they are also within the budget.

After searching a bit about the place me and my college friend (Shyam), decided to travel to this place. Since we both are working in different location of the same company, we decided to meet at a common place - Mangalore .

We both reached there along 09:00 AM in the morning. We had about three hours left for boarding another the train to Gokarna, we decided to visit some place in Mangalore.

After speaking with some locals at railway station, we came to know about Panambur beach located at a distance of 16 Km from railway station. We took a bus to reach there. While we were about to reach the beach the rain started drizzling. The entire climate was awesome.

We went for walking for about one hour and we took sometime for taking some photograph. There was a hotel which sell some cold drinks eatables. We went there for getting some thing to eat. We ate some snacks and it started little drizzling. So we thought of going back to railway station for our train to Gokarna.

The train was late by an hour. We reached the place around 06:15 pm. We check-in to the hotel which we have booked. After refreshing we went to Mahabaleshwar temple. The temple consists of a holy cow inside the complex. Lord Shiva was the main god of the temple. After praying there, we went for Gokarna Main Beach which is just 5 minutes walk from the temple.

The beach was very chill and lots of people where there during the late evening time. There were small shops along the beach, which serves some good snacks and tea. We had our dinner there and went back to our room.

We woke up @07:00 in the morning. We went to the main beach again for taking some photographs. The beach during morning time was very crowded and peoples will be doing different kinds of activities. Their was a small Shiva linga along the beach. We saw a hill at some walkable distance form the beach. We both thought of climbing the hill as it will be good to see beach from the top view.So we started walking towards the hill.

Then we went back to our room after having our breakfast in a local hotel. The food served was really good and was in the budget. We checked out of our room and then went to a Backpacker's Hostel named ZOSTEL. The hostel was a kind of Dormitory set up and they also had private rooms available. It was our first time staying with them.The hostel was really good and it was facing the beach. From the top of the hostel we can see the beach very clearly.

The Manager at the Zostel was very friendly. They had a common room which we can use before check -in and after check - out. We waited their for almost 2 hours , before we checked in to our dorm. We relaxed their till evening before we decide to go trekking for the remaining beaches in Gokarna.

We started around 03:00 Pm from the zostel and started to walk towards Half-Moon beach. We went through the forest area, during which we were enquired by cops , asking us whether we have any alcohols or cigarettes or stuffs. Then after confirming that we don't have any, he let us pass through the area. We were stuck up in one place where the road to Half-Moon beach ends and the route through forest begins. We followed the map and went through the forest.

Suddenly it starts raining, so we lost our path and starting walking in some random directions. After walking for 20 minutes we reached to Half-Moon beach. The beach was very small. By walking across the beach for 10 minutes we will be able to reach Paradise Beach. As it has started raining, we skipped the Paradise Beach. We went inside a thatched roof for hiding from rain. We got a new friend named Nithish from Half-Moon beach.

We spoke with him for 30 minutes, after which he also decide to return along with us since he was also staying in Zostel. We trekked through another way and it was slippery as the mud started to erode and we managed to reached OM beach. By the time we reach the beach, the rain had stopped raining and the beach was full of people both locals and foreigners. We spotted the famous Namaste Cafe along the corner of the beach.

We went inside the cafe. We stayed there for one and half n hour as the atmosphere inside the cafe was astonishing. After that we came out of the cafe and went to some of the nearby rocks along the beach and sat there watching the waves and sharing our stories with our newly founded friend. We sat there and spoke until we realize the time was 08:00 pm.

So we left for the hotel in auto ,which we found for having our dinner. We don't have cash to pay in our hand as ATM was not working around Gokarna. So our friend paid the bill and we settled him later. Then we went to our hostel, where we spoke with the manager for an hour and went to rest for the day

We then left to catch our train back to Mangalore.

Gokarna was really place to chill, to have peace for mind and to place to visit once. We left Gokarna, not wholeheartedly but for life made us to move from that place.