Heaven on Earth....#nature #ladakh #should be on every traveller list

Wait for two years is finally over, we are off to the ‘Land of Passes’. For the time constraint we decided to fly to Leh from Delhi instead riding bike from Manali. Road from Manali to Leh is one among the most beautiful roads in India but riding via Rohtang pass may get challenging with tough weather conditions and less populated areas.

We boarded the early morning flight from Delhi, as we crossed the Delhi territory and flew over to J&K, the landscape changed down under. From concrete jungles to the snow capped mountains. The sun rising above the horizon from under the clouds striking the snow and illuminating the scene. 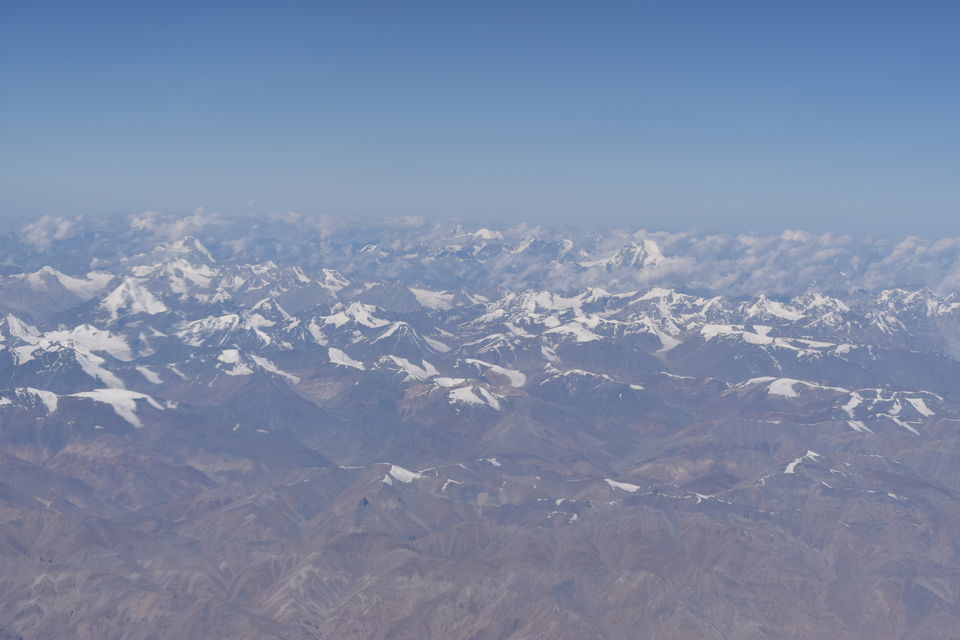 The guide was waiting for us at airport, the Leh airport is operated by Army and has tight security norms. On the way to hotel we can see the Mountain range all around and clear sky with chill wind flowing down the window panes. Our hotel was outside the city periphery, which makes it more peaceful and calm, the room window has a view of snow capped mountains and clouds casting a shadow on land. 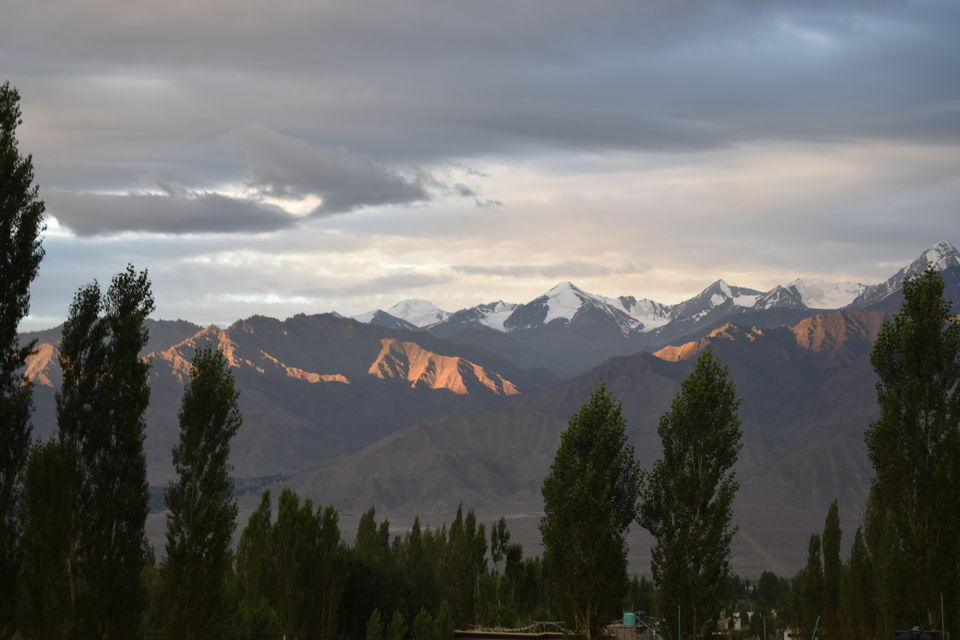 Leh is 11480 ft above sea level, to acclimatize to the high altitude and low level of oxygen rest is necessary on day one, drinking lots of water and also taking Diamox are advised before and during the trip.

After rest we headed to explore market in evening, Street side you can see ladies selling apricot fruit, carrots and some other fresh fruits/vegetables. You can shop for jewelry, souvenir, artifacts, woolen clothes to shoes; also there is Tibetan market from where you can shop for some antique locks, Buddha statues or the Tibetan bells. The things that tempted me most were Pashmina and Yak wool shawls and there were also beautiful embroided shawls, bulk of antique jewellery and hair sticks you cannot avoid to take off your eyes, bit of bargain is sufficient to get you the right price. 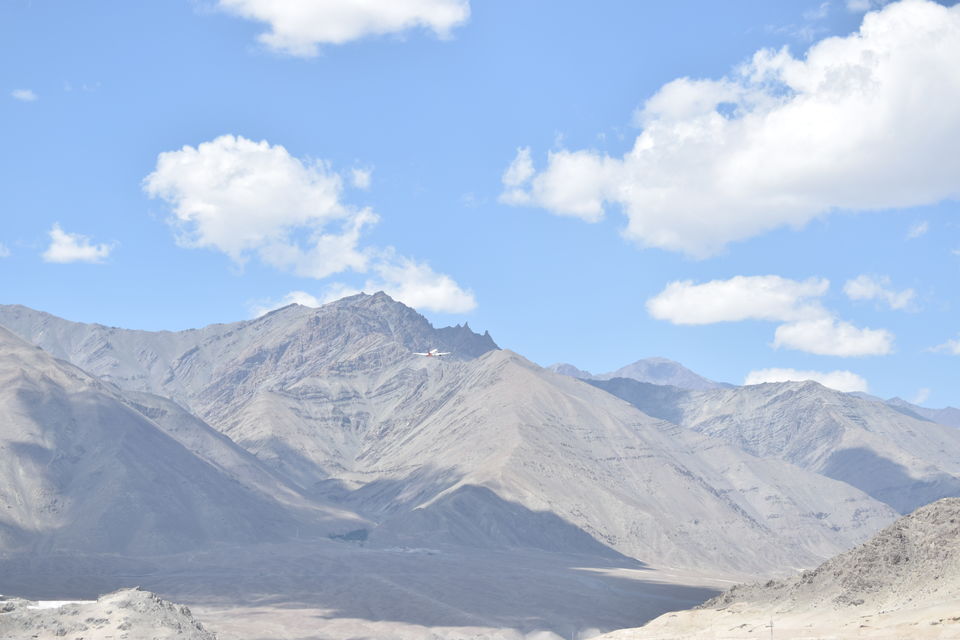 We tried on some local foods like Kashmiri kawa (a mix of kawa tea, saffron, cardamom and cinnamon) and Thukpa (Tibetan dish with noodles).

The day two started with going around the places in Leh. Make sure to keep sipping water(we used tang to keep hydrated). The sun rays are harsh at this altitude so carry sunscreen and sunglasses to protect your eyes. The early mornings and evenings are cold so carry along jacket for protection from cold breeze.

Hall of Fame- A place to feel Pride: It is a museum constructed by the Indian Army in memory of the brave Indian soldiers who laid down their lives defending the motherland in the Indo-Pak wars. You can see the memorabilia, eminent defense personalities with biographies, images and weapons used during the Kargil and other key strategic battles fought in Ladakh. And belongings of the enemy soldiers found at war site. All the martyr and the gallantry awards. Also there was a picture of MS Dhoni in army uniform taken during his visit to Leh.

Spituk Gompa: It is at the top of hillock striking a panoramic view of the Indus Valley. Prayer flags flutter all around the place. Gompa also houses a collection of ancient masks, antique arms, and an awe-inspiring image of Mahakaal. The face of the Kali image is kept covered and is revealed only at the annual function at January every year. We sat inside the gompa for a while, you can feel the peace within you.

Magnetic Hill: Defying the law of gravity. It has been noticed that when a vehicle is parked on neutral gear on this metallic road the vehicle slides up-hill.

Gurudwara: Built in the everlasting memory of Shri Guru Nanak Deve Ji the great prophet who sanctified the place by his sacred visit during the year 1517. It is run by Army official.

Confluence of Zanskar and Indus: On way to Sham Valley before Nimu village one can have this magnificent view of two rivers, they have different colors and flow. You can also go rafting here. 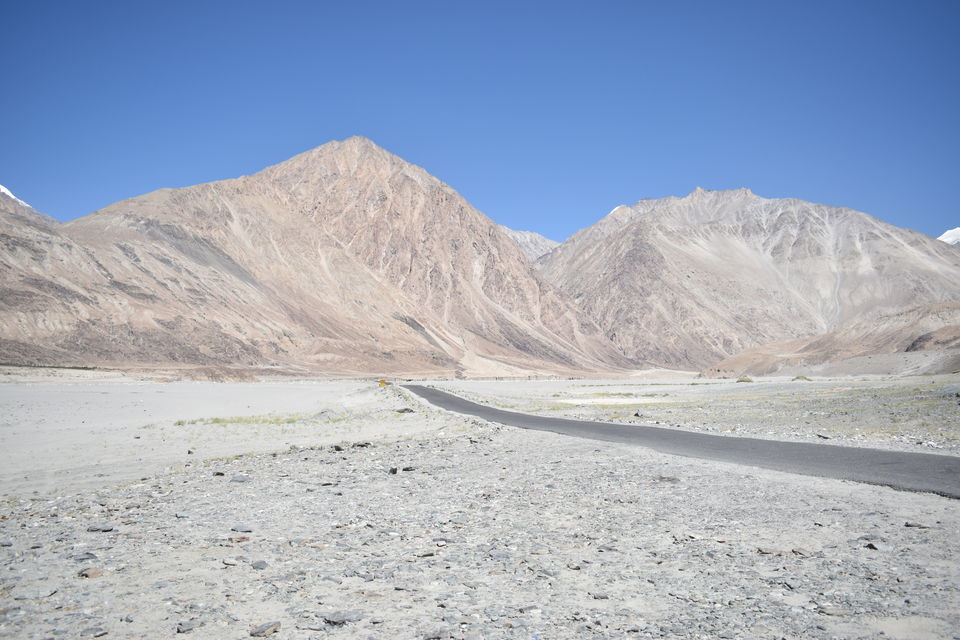 We are already engrossed in the beauty of Leh with some more picturesque view on the way, we next stops at Nubra Valley, Khardungla and the mesmerizing Pangong Tso. For more pics check out the insta and facebook page

Continue in next blog…… https://espirituelibre.blogspot.com/2017/08/drive-through-highest-motorable-road-to.html