A location suggested by many, visited by a few and a must go destination for every avid traveler - Hampi. Yes! The most searched historical place in Karnataka, situated in it’s North. Hampi is known for its two very contrasting characteristics, one, the mythological history of ancient monuments and second, the Hipster culture.

So, this year in August, the most awaited trip to this exquisite venue finally happened, with 3 very dear college friends. We left from Bangalore in the afternoon. The ride was enjoyable as the roads were awesome. But just when we were about to reach, our car broke down. It was dark so we had no option but to push it down as there was no chance of getting any help on the silent roads of Hampi in the night. Somehow we managed to accomplish the strenuous task and reached the city.

While trying to make some calls came another surprise, we realized there is no tower in our phones. After inquiring, we were told that the major stretch of the city doesn’t support majority of the networks (almost all). Standing in the middle of the road, completely clueless, we had no idea how and where to proceed. The mindset of doing things at the last moment (when they are super urgent) didn’t let us pre-book the hotel and so we randomly started searching, it took us around an hour to find a decent place to stay because it was a long weekend so most of the places were already occupied and the options easily available were not very desirable. I must admit the initial series of impressions of Hampi were not pleasant, something we never expected. Anyways, we dozed off after having dinner and few rounds of "the thing" which is must jab mil baithte hain teen yaar ;)

Next day in Hampi started with a fine morning, the lazy attitude did prevail for a while but then we quickly got ready and left for the expedition.

Our trip started with Breakfast at this well known restaurant named “Mango Tree”, not really sure of the cuisine it’s famous for as their menu was damn vast, but for us there wasn’t much thinking once the eyes caught hold of “Nutella Pancakes”. 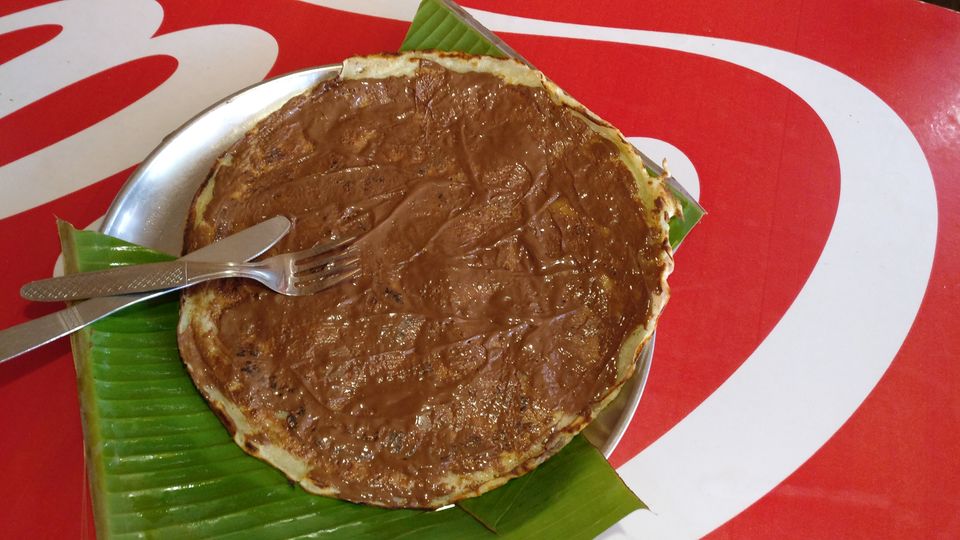 Had a yummy breakfast and a cup of good ginger tea and left for the ferry (boat) that would take us to the other side of the river. So the city Hampi is situated on the two sides of a river. The side we were staying in had the ancient monuments and the second side where we were progressing to, had the hipster culture (as I mentioned above and shown below :P).

The trip was even more crazy, believe me ;) 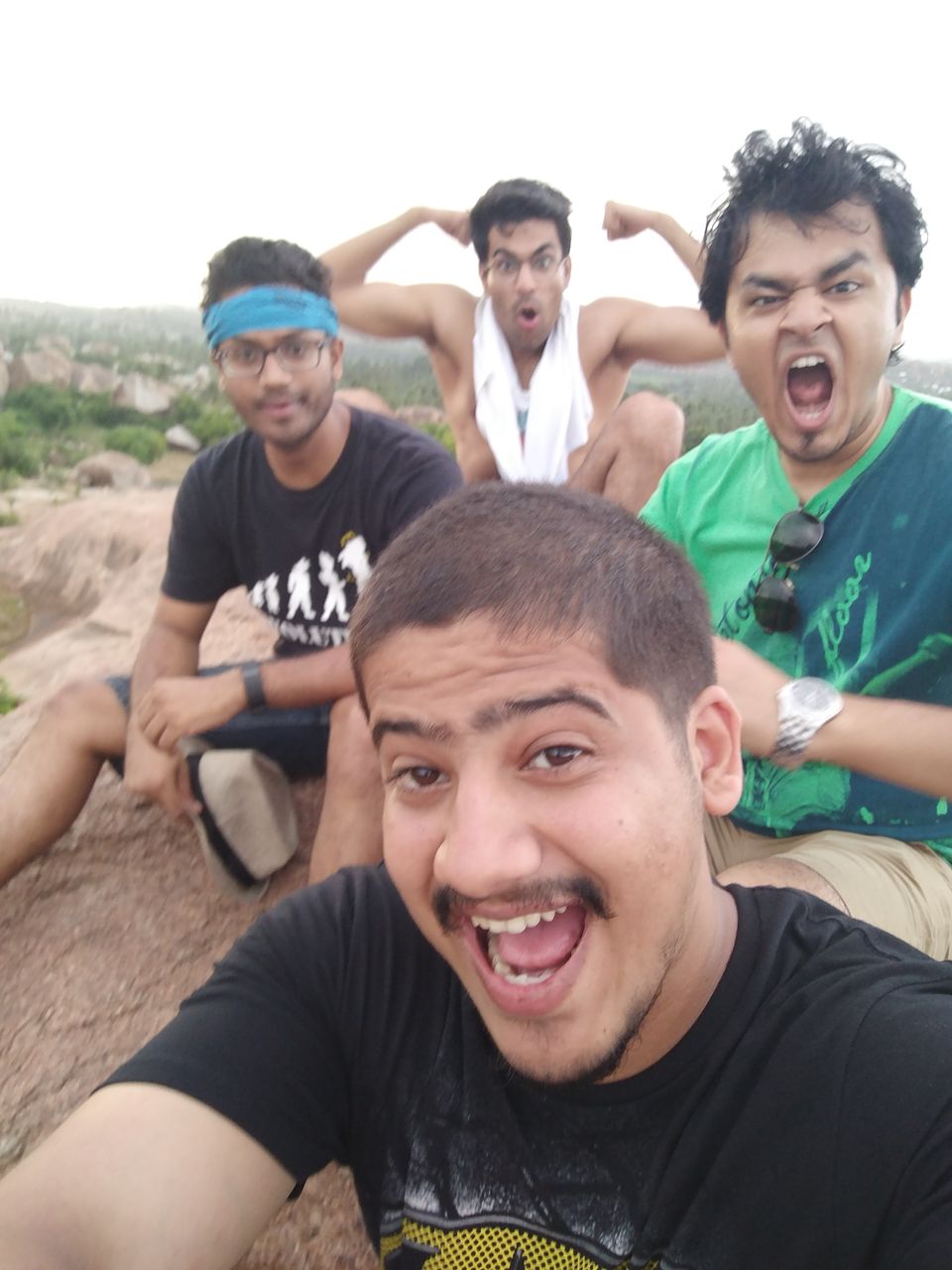 On reaching the other side, we hired scooters and the thrill began!

Arpit on his scooter, beside the dam 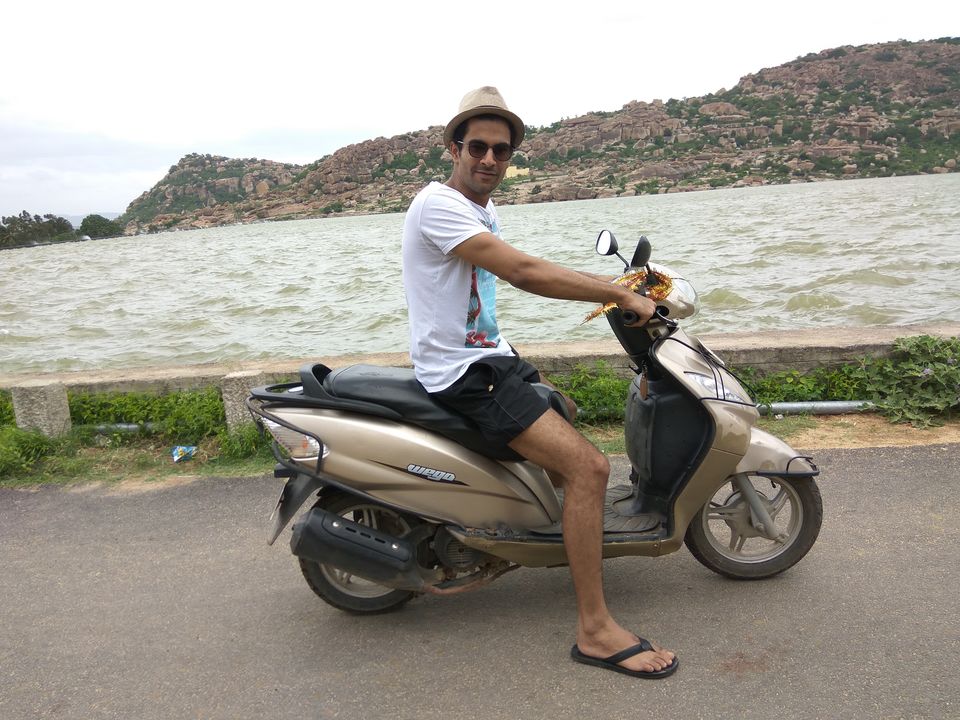 Roads were bumpy in the beginning, our adventurous ride took us to the first amazing spot - “The Overflowing Dam”. 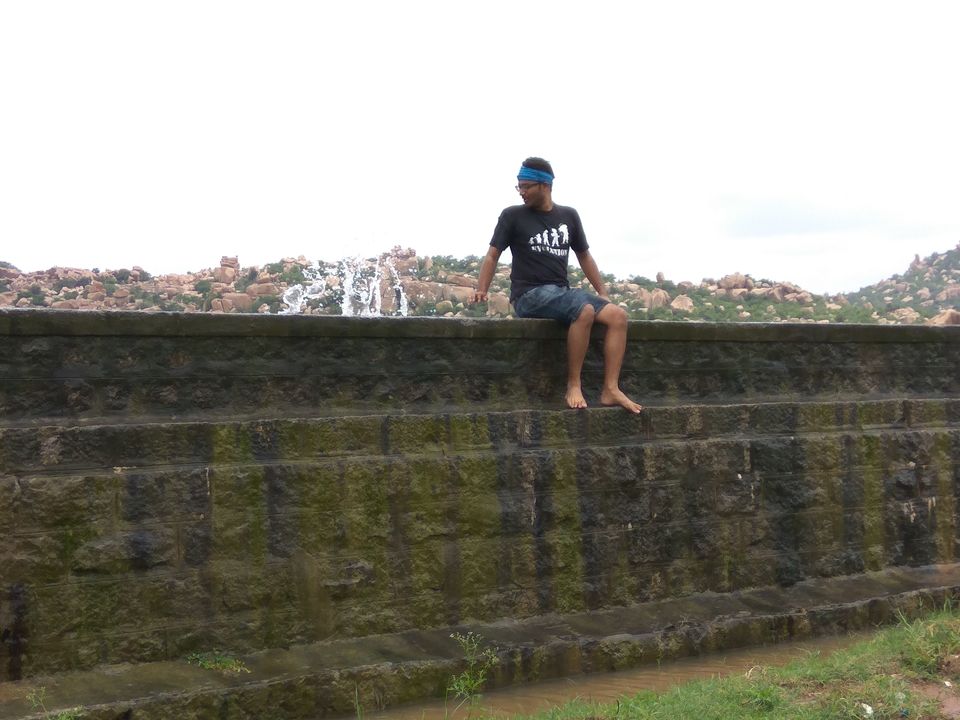 Water was literally sprinkling out on us while riding, giving us a hard time to maintain balance on the slippery roads but nevertheless, the feeling was exhilarating.

Moving on, we went boating in the Coracle boats. 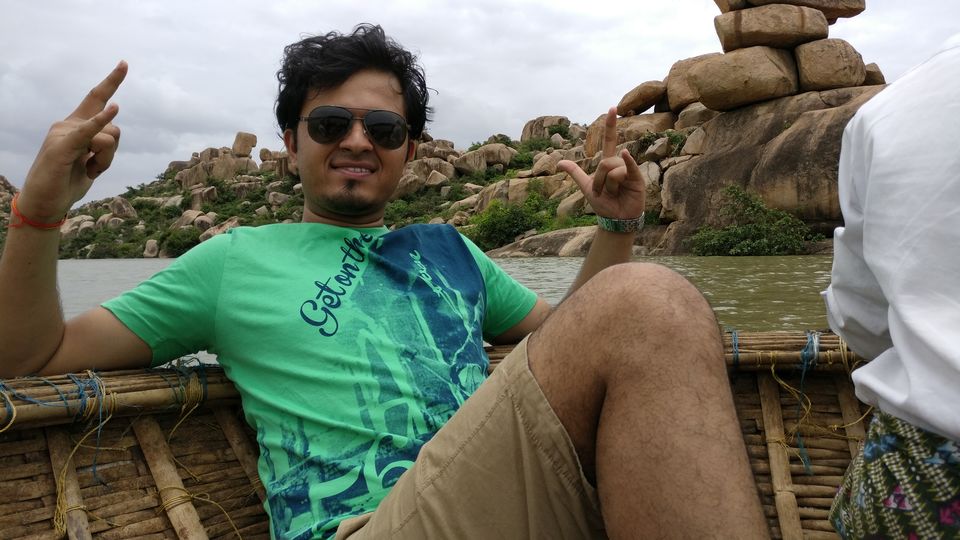 And then came the best part - the long ride on the calm and serene roads of Hampi. Riding on scooters at such an astonishing location feels heavenly and is really pleasing to the soul.

I'm not sure if the view is captured in any of the philims. If not, I wonder why! 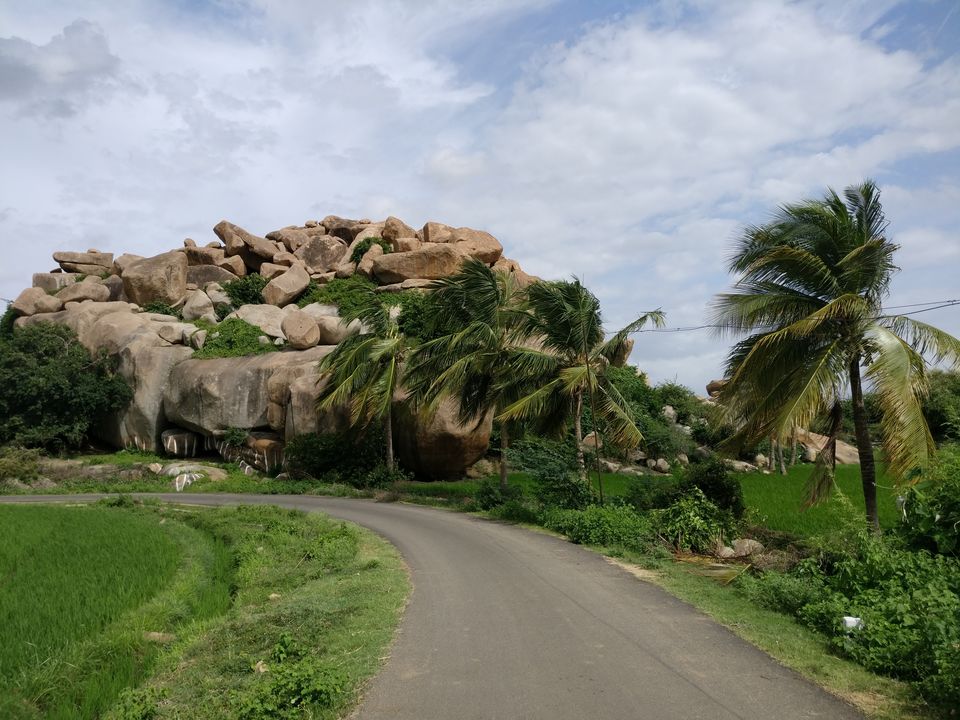 The ride took us to a cafe in the interior, surrounded by beautiful huts. In Hampi, there is a tradition of seating arrangements (mattresses) on the floor, so all of us took ours and relaxed for a while. The Greenery and the natural ambiance surrounding the cafe was fab, fully refreshing and worth the time spent. 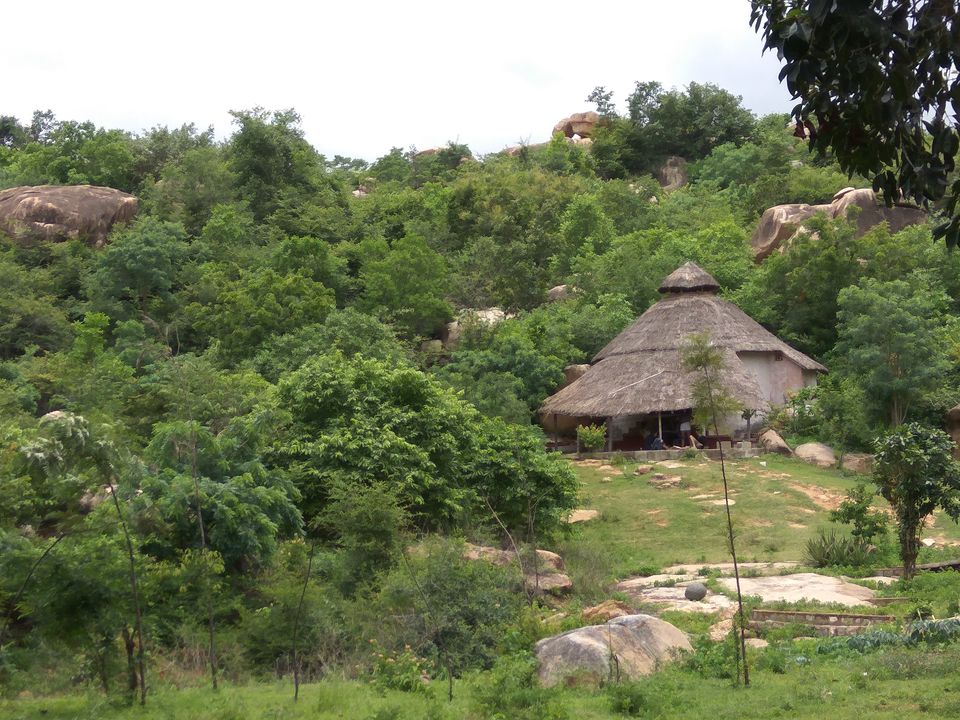 We finished our lunch and then left around evening for covering the nearby locations. By the time we covered few, it was time (5:30pm) to take the ferry back to the other side of the river because we were told that is when the “last ferry” departs.

On reaching the other side, our first exploration site was the Virupaksha temple, it is the main centre of pilgrimage at Hampi and has been considered the most sacred sanctuary over the centuries. 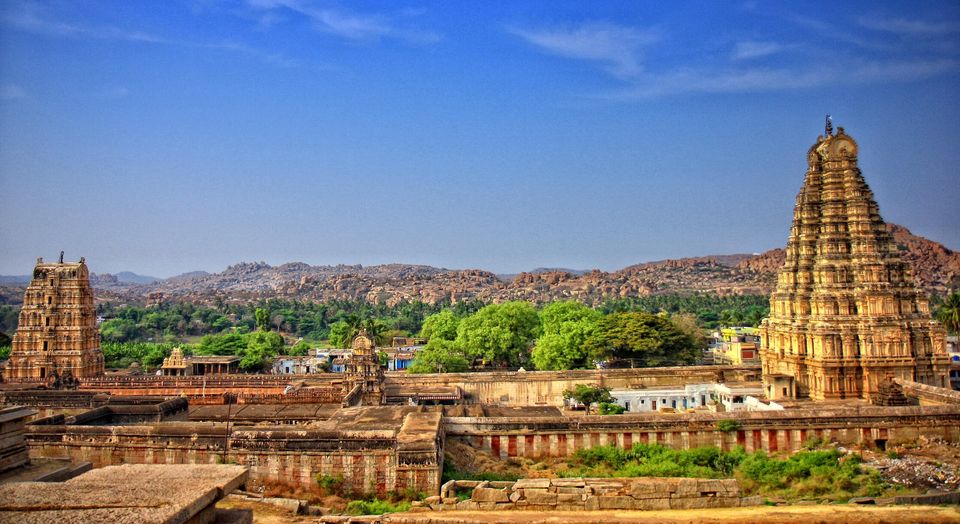 Beside it was a series of monuments built on a steep slope, the path took us to the peak where we got an amazing scenic view, a view of the giant boulders arranged in random order, as if they’ll fall any moment (and the brief thought was enough to give goosebumps). 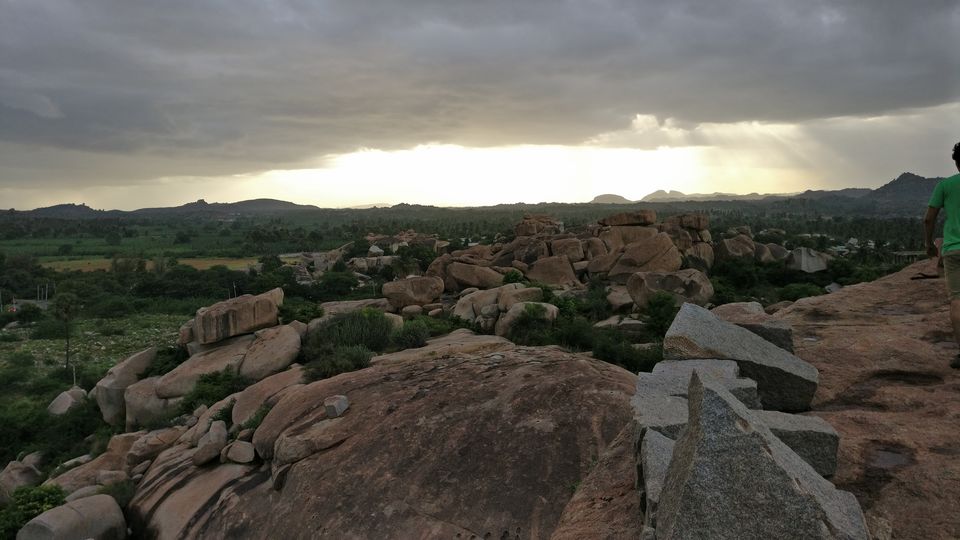 As the Sun started setting we began descending, slowly and steadily walking down the hill, the thought that our trip has almost come to an end started sinking in. After coming down back from the slope, we headed towards Mango Tree again, for dinner. The tiring day was followed by a very satisfying meal. Once we were done, went to the hotel, packed our bags, checked out and left for Bangalore.

I'd summarize my experience and the beautiful 2 day journey in simple words, “Hampi is an exceptional place to chill out, its calmness is nowhere to be found, as far as the scenic views and locations are concerned I’m sure you’d not see something similar anywhere else”. 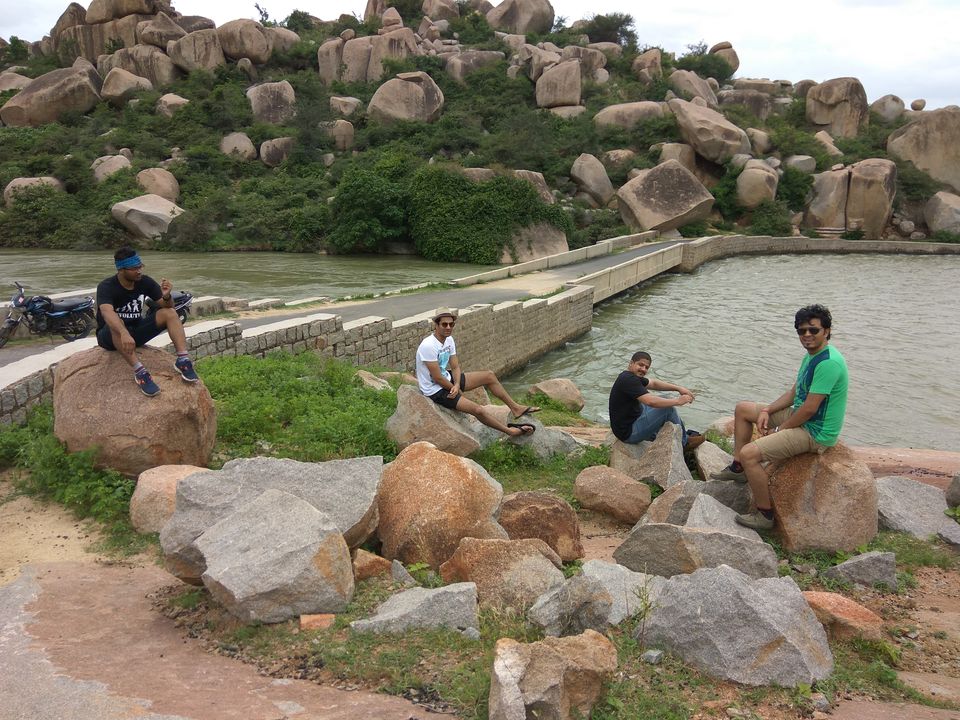