Highest, Biggest And Largest Places In India: How Many Of These Have You Covered?

Highest, Biggest and Largest Places in India: How Many of These Have You Covered? 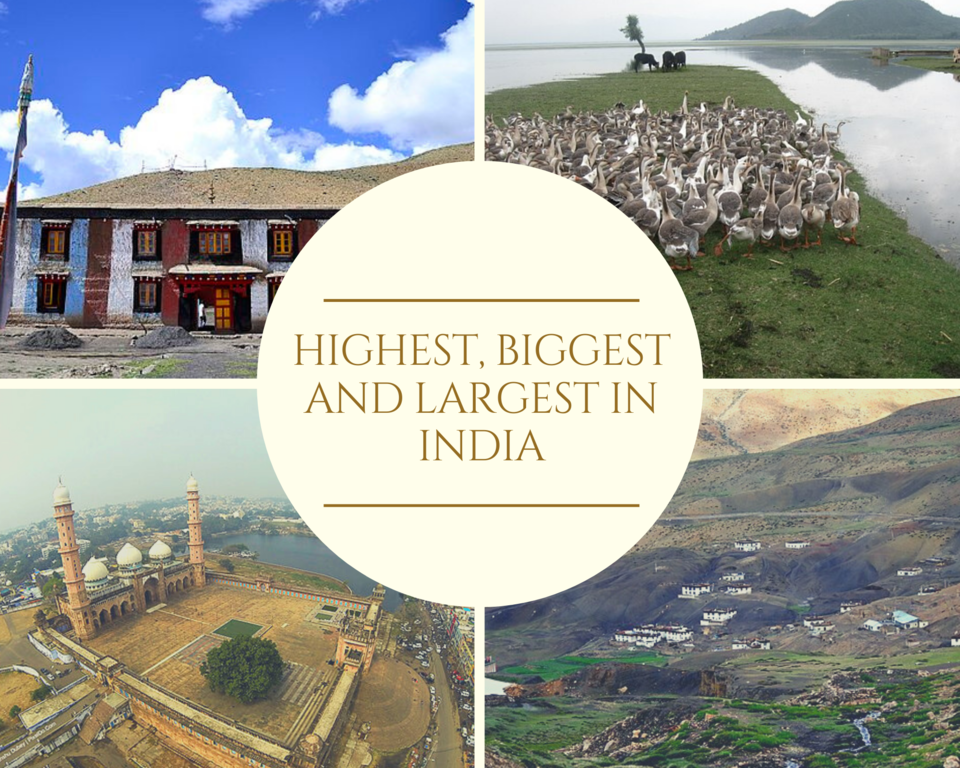 India is the country of extremes, and while a lot of foreigners, in the past, have tried to change its colours and flavours, it remains aesthetic and pure. Many wonders are peppered by nature and some are created by humankind, which wears the crown of being highest, profound, extended, most extensive and significant in India. You would leave wondering after knowing how closer and farther they are from you! Keep reading:

Komic is the highest village!

Perched in the spectacular Spiti Valley at an altitude of 4587 m, Komic is the highest village connected with motorable road in India. Not just that, the village is famous for its 14th-century monastery that's studded with historic murals, art and scriptures. The name Komic comes from the tale that says that well before the construction of the monastery, it was foretold in Tibet that a monastery would be built in the mountainous region of Spiti that will be in the shape of The eye of Snow Cock; hence the name - 'Ko' stands for Snow Cock and 'Mic' means eye.

It's connected with the rest of the world for only half of the year, while it is covered in snow for the rest. During winters, the temperature falls to -30 °C. It's sparsely populated, but popular among tourists for its beauty and two other nearby villages - Langza (the Fossil village of India) and Hikkim (the one with the highest post office in India).

Located in the Lahaul and Spiti district of Himachal Pradesh, Hikkim houses India's highest Post Office. The post office connects small villages in the isolated region to the rest of the world. The post office receives and sends postal letters and also acts as a savings account for the locals. For us, it is far away; for the inhabitants: Hikkim is home and the post office: their pride.

The Chenab Bridge is the highest rail bridge!

In the highly rugged mountain ranges and challenging Himalayan topography, the Chenab Bridge proudly stands at 358 m above the river. This makes the Chenab bridge not only the highest in India but also the whole world. It is located between Bakkal and Kauri in Jammu Kashmir. Presently, the bridge is under construction due to complicated terrain challenges. Once completed, it is going to be a boon for the locals.

Amarnath is the biggest cave!

Located in Jammu and Kashmir, the Amarnath is the largest cave in India. The cave is about 19 m depth (inward), 16 m in width and is about 11 m high. It houses an image of Shiva that naturally forms as an ice-stalagmite and is located at the height of 3888 m. It is an important pilgrimage shrine for its Hindu devotees, and people from all over India flock here just for a glimpse of Lord Shiva.

The holy yatra to the shrine is a 56 days long and arduous journey, but what is difficult if it ends with the name of god!

Wular Lake is the largest lake!

Kashmir is filled with the ethereal beauty of mountains, landscapes, and immense flora and fauna; it is no wonder why it is called "the Heaven on Earth". Surprisingly, it is also home to Wular Lake, India’s largest freshwater lake partially fed by the Jhelum river. The lake is kept at the height of 1580 m, 16 km in length and 10 km in breadth and is of great economic and environmental significance. It is known for its sustainable wintering sites for several migratory waterfowl and terrestrial species of birds. Alongside, about 60% fish yield comes from here for Kashmir valley.

Road at Umling La is the Highest Road!

The Border Road Organization has inaugurated the new highest motorable road at Umling la, which stands at the height of 19300 feet, even more than the Everest base camp. By being at this whopping height, it has surpassed the stature of Khardung la road at 17582 feet. The Umling La road stretches for 52 km and sits over Umling Pass. For adventure enthusiasts, who want to reach the highest places, you have a new benchmark.

This new road will help develop the socio-economic condition, promote tourism, help the army ferry troops and supplies to camps at ease.

The Taj-ul-Masajid is the biggest Mosque!

Situated in Bhopal, the Taj-ul-Masajid is the biggest mosque in India. It is one of the grandest and beautiful mosques in Asia. Considered as "the Crown of Mosques", it is a prominent landmark in the lake city. It is an impressive example of Mughal architecture whose construction started in 19th century, but could be completed till 20th century due to a lack of funds. The entrance was renovated with motifs that came as donations from the Emir of Kuwait in the memory of his loving wife.

Now that it's completed, it's sprawled over an area of 23,912 sq ft. It swaggers a broad pink facade, minarets, spacious courtyards and an inter-arched roof.

Now that you know, consider exploring more of India, from a new lens, with a new perspective, and come back perplexed.

Chat with us on Whatsapp to help us plan your next trip!

Want to be featured by Tripoto? Join the Tripoto Influencers Club now!