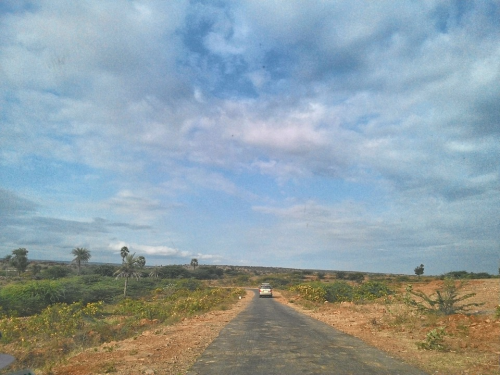 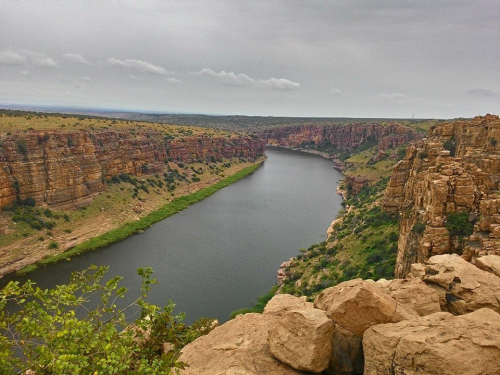 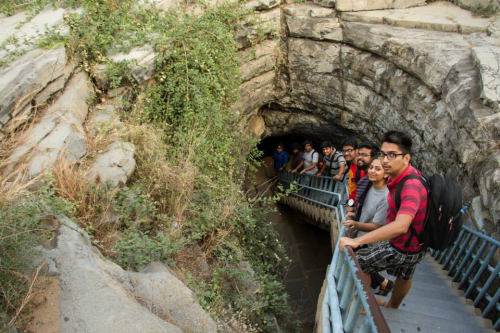 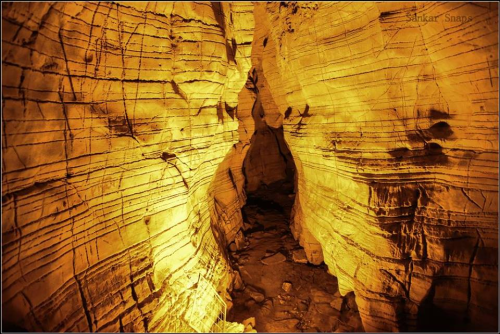 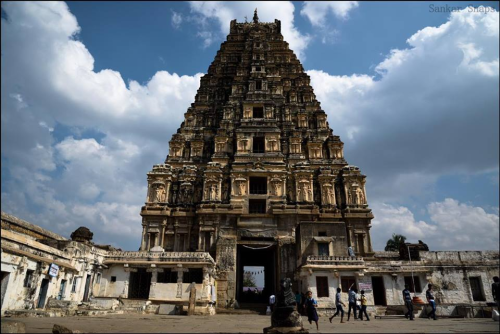 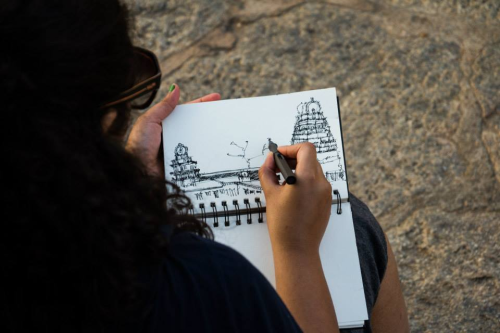 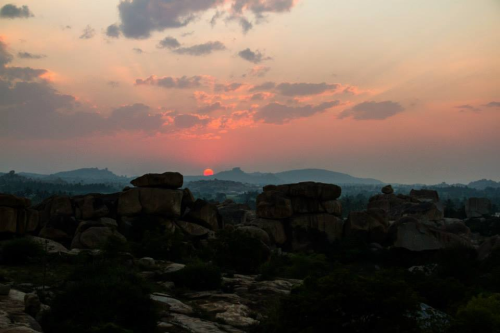 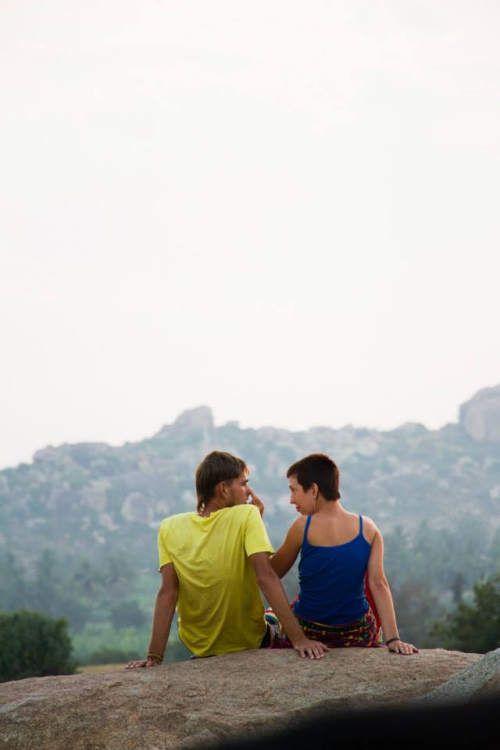 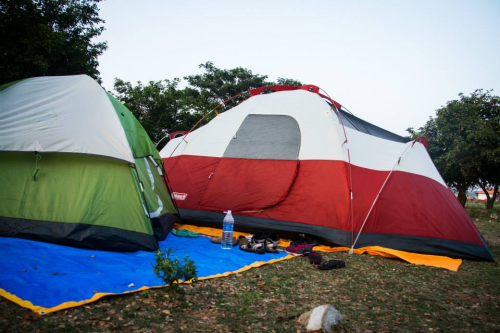 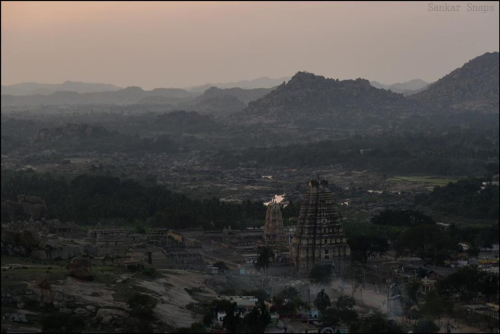 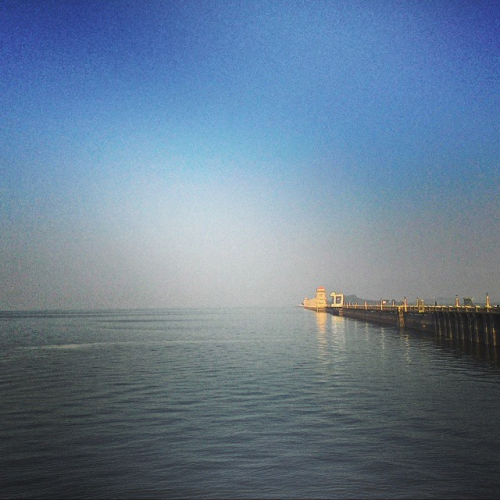 Hampi had been in my bucket list of places to travel for quite sometime, but due to various reasons the plan had never materialized. At last in November last year when I was thinking about my plans for bringing in the New Year, I decided I will plan Hampi for the New Year.

I told about my plan on the whatsapp group (we call ourselves the Rubber Band) and I got the nod from almost 10 people, who were all excited about the prospect of welcoming the new year whilst travelling! And thus started the planning for the trip. Since it was a long weekend and I didn’t want to restrict the trip to just Hampi, but also cover some places enroute, I got about checking the map and lot of websites for places of interest nearby. There are a lot of places around Hampi that are of historical importance. The place that really caught my attention was Gandikota, a ruined fort complex in Kadappah district of Andhra, some 250 KMs away from Hampi.

I made the travel itinerary in the subsequent week, dotting the places that we will be going to. Below is the email with the itinerary that I sent my friends:

Below is the itinerary for the New Year’s Hampi trip. Let me know if this is good. Drive will be relaxed onward and a little hectic during return. But we can definitely manage it.

New Year’s celebration on the way. We will try to reach Gadikota as much as possible by Midnight, if we start on time.

Visit Gadikota, as much as possible around Sun rise for the best views. Go around the fort, Have breakfast and proceed to Belum caves. Explore the caves and surrounding areas post lunch.

Around 5 PM we will start and proceed to Hampi.

Night halt – Around 11 PM find a suitable camp site before reaching Hampi and call it a day.

The next two days we will explore Hampi and adjoining areas completely. We can hire cycles in Hampi and go around the ruined city and take a hike to surrounding hills around sunset.

Stay: We will try and get some accommodation for the 2 days.

We will cover as much as possible in a relaxed manner over the two days.

We will start early on Sunday and visit the Tungabadra Dam and then proceed to Hospet and drive back to Chennai. It’s easily 11-12 hours drive with stops in between. We will plan so as to reach Chennai by late night on 4th.
By the 28th of December, we had decided on the final count of people who were joining. We were 10 of us in 2 cars (1 innova and 1 Swift), with 2 tents, (One 8 people tent and One 3 people tent), food, backpacks, and lot of camera equipment (thanks to one super awesome photographer/cinematographer friend).

On the 31st of December we set out from Chennai. We started at around 4 PM and were thinking of reaching somewhere close to Gandikota, late in the night so that we can catch the sunrise there. The route we had planned for was:

Chennai - Nellore - Badvel - Jamalamadugu - Gandikota - Belum - Hospet - Hampi - Tungabadra - Anantapur - Chitoor - Chennai
We reached Nellore around 8 PM and had some nice, spicy nellore dosas for dinner there. The road from Chennai to Nellore was superb, except at a few places. From there we proceeded further towards Jammalamadugu through the state highway. The roads from Nellore were in a pathetic condition and we struggled to move at more than 60 Kmph. The roads were hardly, if ever, lit and had a lot of potholes.

Around 11 PM we decided we should call it a day and camp somewhere. We were still a long way from Jammalamadugu and didn’t want to push any further since most of us were tired and we wanted to camp and celebrate the New Year in some village. So we stopped at the next village, some 10 KMs after Badvel. We found a nice cemented area to camp and pitched our tents.

We pitched the tents, the guys took out some beers and I took to my bovonto and we started our celebration. Somewhere close by, a bunch of youngsters from the village had gathered together, bursting crackers and shouting Happy New Year. We welcomed the new year in style, camping in an unknown village somewhere with barely any signal. I walked across the road to a point where I could catch a 2 point signal and called and messaged some important people, and after some chatting and pulling legs etc, around 2 AM I went to sleep.

After a short nap, at 4 we woke up and started our journey to Gandikota. Around 5.30 we reached a small town, where we took some tea and refreshed ourselves. A left from there, led us to Jammalamadugu. There were numerous Cuddapa quarries en-route and we stopped at one huge one to have a look! The quarry looked abandoned with a huge pool of water down below. The size was humongous!

At around 8 we reached Jammalamadugu, had an amazing breakfast (Idly, kara dosas, vada, poha etc) and made our way to Gandikota. The road and the scenery en-route to Gandikota is a treat to the eyes! Winding roads through vast barren land with varying terrain, we didn’t want the ride to end!

After a small glitch with one of the cars, which took an hour of our time, we reached Gandikota by 10 AM. We were the first people to reach the place that day. The entry to the fort was like entering a palace! We rode into the fort through the narrow road and parked our car inside (which we realized was a huge mistake) and walked up directly to the canyon.

The views at Gandikota are astoundingly beautiful and gives you goosebumps all along! I would suggest each on of you, who is in India or visits India to go to Gandikota! It’s just spectacular, all along! After some photo and video sessions (GoPro on DJI Phantom) we came back, only to find that the fort was now filled with people, owing to the holiday. And our cars, which we had parked inside were now completely blocked with 10’s of other cars and bikes and Autorickshaws. We had to wait, push, move a lot of vehicles to take our cars out, and we ended up wasting another 90 minutes of our time.

Once out, we had tea and cool drinks and headed to the APTDC’s restaurant and had some good meals and refreshed ourselves and set out to Belum caves, which was around 60 KMs away.

We reached Belum caves around 5 PM, right in time before they closed the entry. The Belum caves are huge. The entry point is a staircase going under ground, like into a well.

As we start walking in, you start realizing how huge and strange the place is. It is the longest cave structure in India, a whopping 3 KM long, most of which is currently closed to public. We took a guide along, who took us around, speaking a lot of sense and non sense and rushing us (since it was beyond closing time). We had fun making echos, shooting with the Sony A7s in zero light and making shadows etc.

By the time we got out, it was already dark and we decided to stay at the APTDC guest house just outside Belum. We kept our bags in, refreshed and went out to have some dinner and then called it a day!

We started for Hampi early the next morning. It was a long, 200 KMs drive through good and bad roads. We crossed the ultra tech cement factory which resembled the reliance city in Jam Nagar! So huge and full of lights, it looked very fancy from outside!

We reached Hampi around 11 PM. We parked our vehicles and headed straight for lunch in one of those crowded restaurants.

Then we went around the town for quite a bit. Started with the famous Virupaksha temple, taking time lapse videos, pictures and documenting the wonderful history of the beautiful temple through pictures and videos. We spent quite a bit of time within the temple. I sat in one corner and meditated for a while, refreshing myself!

Beside the temple was the Hemakuta hill, a small hillock with some structures on it. This was one of the many sunset points in the city.

We spent the rest of the evening on the hill, taking pictures and relaxing with one of the most beautiful sunset views ever!

The place was extremely romantic and attracted a lot of young couples during that time.

It was dark by the time we came down the Hemakuta hill. We decided to camp out and since we had to look for a place, and since there was no vacant camping spot inside Hampi, we took our cars and headed outside Hampi, looking for a camping spot. We drove for around 6 to 7 KMs when we saw a deviation to the left. Luckily for us there were lot of vacant plots in this area. We went a little inside and chose a spot and decided to camp for the night.

The weather was extremely good. A few of us went to Hospet and got dinner for the group. We had a superb dinner and then pitched the tents and called it a night. Camping there was a brilliant experience, with the moon and stars giving us a surreal blanket! It is not in the hotels or cosy beds that one gets peace, it was here, in the open, being one with all!

We woke up the next day, packed everything and left for Hampi. We parked our vehicles and took turns to get refreshed. One quick note about the public toilets in Hampi; they were extremely clean and ultra modern! It was surprising to see the toilets maintained so well!

After getting refreshed, we went to have brunch. This time we chose a lesser known restaurant in one of the market roads. Had a decent continental brunch, after which we set out to visit the Queen’s bath. Every monument in Hampi had it’s own grandeur and history! The sheer scale of the monuments and it’s perfect engineering leaves you speechless and in awe.

We visited the following places that day:

We ended the day on top of the Matunga hill amongst hordes of monkeys, with yet another beautiful view of sunset over the entire Hampi city! It was a glorious view.

We descended down the hill around 7 PM after the sun was completely down. Hungry and thirsty we took directly to a restaurant. Ate to our heart’s content, drank (some special drink which shall not be named here) and then went back to the camping spot. We told a final bye to Hampi before leaving, vowing to come back, for we had still a lot left to see (the other bank of the river).

The next morning we started at around 7 and visited the Tungabadra dam and reservoir, which resembled an ocean.

From there we started our journey back to Chennai, stopping for breakfast in Tungabadra town (sumptuous breakfast on the roadside) and driving through the beautiful roads of Anantapur. I reached home by around midnight.

It was an extremely memorable trip with a bunch of like minded souls. Loved every bit of it and the places we visited were all par excellence. This route definitely shall be done again in a more relaxed way! Hampi and Gandikota have been etched in memory forever!

This travelogue was first published by  RUSTIC RAMBLER .