How I survived my first bear encounter alone and unscratched

Yosemite is a beautiful national park located in California, US. It boasts magnificent scenes of mountains and waterfalls and exhilarating hikes suitable for every level of fitness. 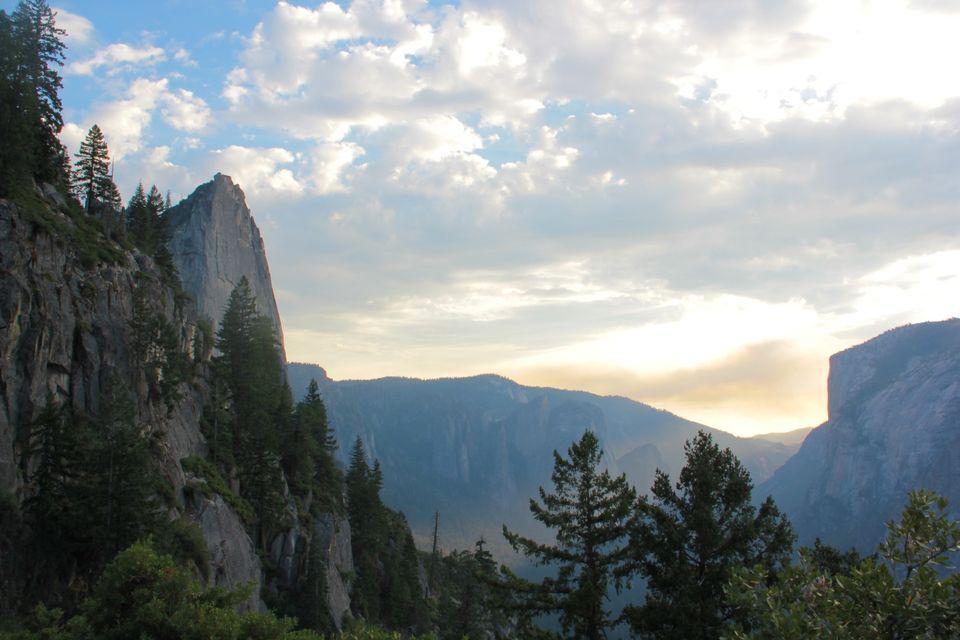 Filterless photo i took on a hike

There is one more thing this park is famous for: Bears.

Bears roam around every area of the park and encounters are quite frequent, thus the facilities are accommodated with things you wouldn´t find in many other places, like bear-proof bins, bear-proof knobs and billboards such as this one: 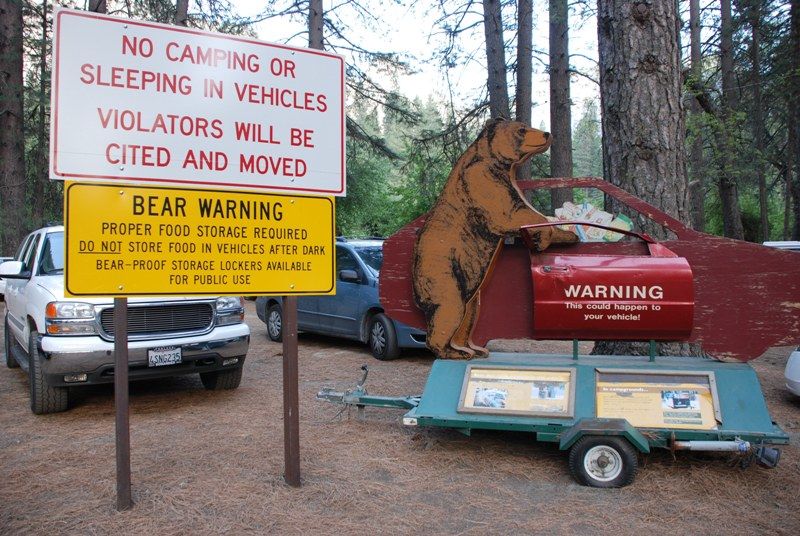 The relationship between visitors and bears is so well stablished that bears have learned quite well how to get food from the unaware humans. There is a list of car makes and colors who bears will often target as they have proven to be good source of food in the past. I swear I’m not making this up, the bears know which cars are usually filled with food and will break the windows of those cars to get what is inside of them. So leaving food on the seats of the car is strongly advice against.

I got early morning to the park and for a couple of days I hiked through absolutely beautiful scenery such as this one: 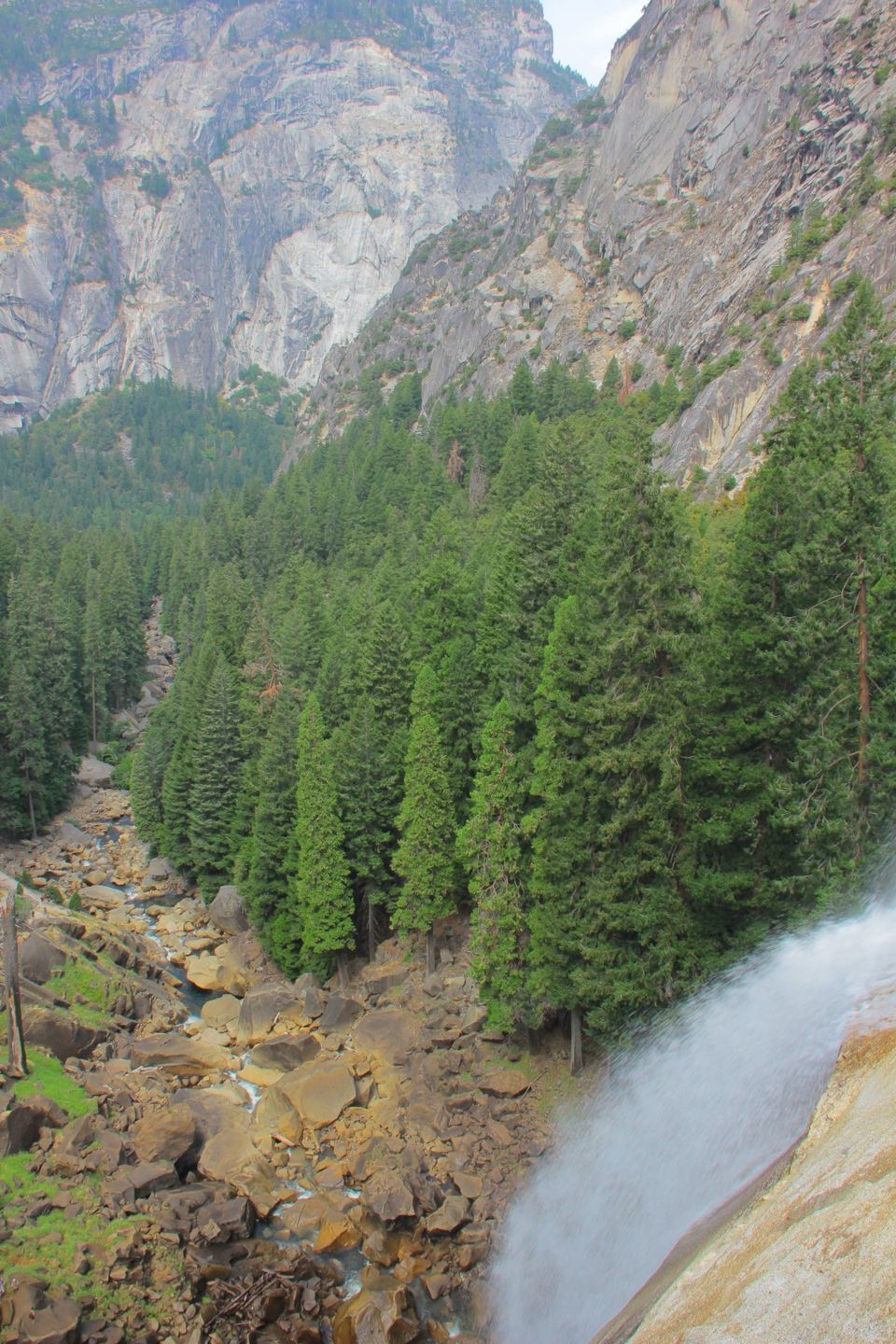 On the second day I took the car and went driving to my next destination, Lake Tahoe, some 200 kilometers away. I passed through deserted valleys full of immense feeling, every time I see places like this I wonder what it is it like to leave it all behind and live in a place like this, full of nothing and everything, a time alone with nature and myself.

As I was passing this places I was thinking what if I camp here? A night under the stars away from the city! So as soon as a I crossed someone on the road, a Harley Davison rider, I asked him if he knew how safe was to camp in the area, he said he had an RV just next to the road and there were no problems whatsoever, he said there were bears around but they usually stay away from people.

I don´t know if what you read made you think ‘oh! An awesome night under the stars’ or ‘Damm no, a night in the wilderness with bears around you’. I´ll tell you, for me the spell of the place made me think the first one, but then when things unfolded I thought the second one along with ‘what the hell was I thinking?’.

So I found a dirt road leading 1 kilometer away from the highway, where a communications tower was set up. I drove until I found a barrier I could not pass with the car, but could be easily walked across. It was getting dark and I felt I was doing something wrong, but I walked until I reached the antenna complex. There was a small building, it was dark inside and there was a huge padlock on the entrance. I screamed hello several times to check for an inhabitant, nothing came back. I decided to climb up the outer stairs of the complex and I reached what it looked like a small office, again locked with a padlock. Darkness was taking over the place and I knew setting up the tent in the dark was harder, so I started going back to my car. 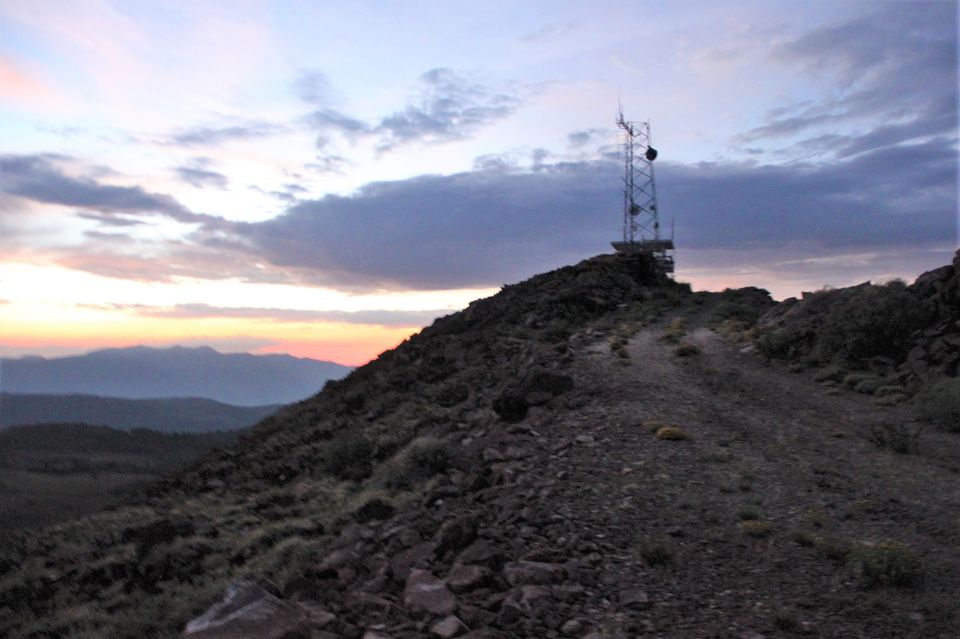 The actual road, after the barrier.

On the road there were sounds, I couldn´t see far but I knew I was not alone, a bear? A rabbit? A rat? I had no clue but I was scared and the torch of my cellphone did not shed light far away. I rushed and I got to my car, what to do now? What if a bear attacks my tent? What if no one hears me? There was no one around for at least 2 kilometers, would I get help? I thought again and I decided I was being irrational, after all the guy said the bears usually stay away from people, maybe that would be the case. I decided I would stay there (because anyway I was still 3 hours away from the next town), but I´d stay in the car in the backseat, and so I set myself up and fell asleep.

It was around 2 am when I woke up, there was something outside my car, I could hear footsteps close to the window, it was heavy, the sound on every step told so. For a few minutes there was no sound, I thought my head is making this up, but then the footsteps would start again. I was petrified, not daring to make a single movement afraid of drawing the attention of the animal outside, the images of bears breaking into cars running wild on my head. It kept on circling the car, slowly but steady, it seemed to know what it was doing and it was just scaring me, waiting till my nerves run out to attack.

I waited and waited and hoped the animal went away, I knew if it were to attack I had little chance against it, maybe I could turn on the car while it tried to break in, maybe I could hit it hard with my naked feet, maybe I could outrun it in the open. Half an hour into this game my patience was running out, the footsteps stopped for some minutes and I raised my head and looked outside. It was pitch darkness, there was no moon and no public lights to rely on, I couldn't even see two meters away. I decided to turn on the torch and point it outside, wrong, the light bounced on the window and still I wasn’t able to see anything outside. I was scared. I laid down and the footsteps started again, I could hear my heart beating harder and harder as I thought it saw my torch and at any moment it would put its paws on my window to look into the car. But then I remembered the car keys in my pocket, slowly I reached for them and I decided to press the honk button, maybe it would drive the animal away, maybe it would make it attack, but i needed this situation to stop. I pressed the button and the sound was loud and echoed away, to my relief, this time I heard the footsteps going away and finally I sighed in relieve.

I thought that would be the end of the night, but just before the dawn I heard a plastic noise inside my car, it was like the pack of cookies on the floor of the car was being open. I turned the torch on to find a small rodent the size of my foot staring at me, quickly I jumped out of the car and I started to take the things out of the floor. It was gone, turns out it entered through the ventilation ducts under the seat and was chewing the plastic package, I didn´t know my car had become and animal shelter. Just another lovely night on the road, right? so I thought I had enough and as daylight was finally coming for this long, very long night, I went on my way, the whole day repeating to myself, ‘what the hell was I thinking’. 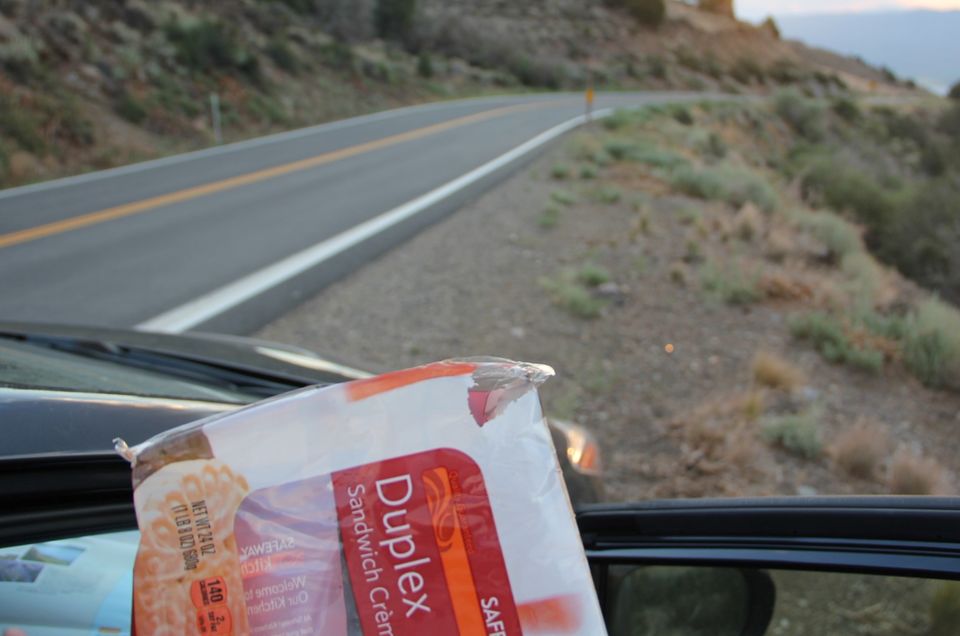 The bitten package. The top right corner was actually opened by the rodent

This article is part of the series: 20.000 kilometers across the US. You can read the first article here