India Travel GuideIndia TripsHow We Hitchhiked Our Way To Hampta Pass Trek — Just The Two Us.

How we hitchhiked our way to Hampta pass trek — Just the two us. 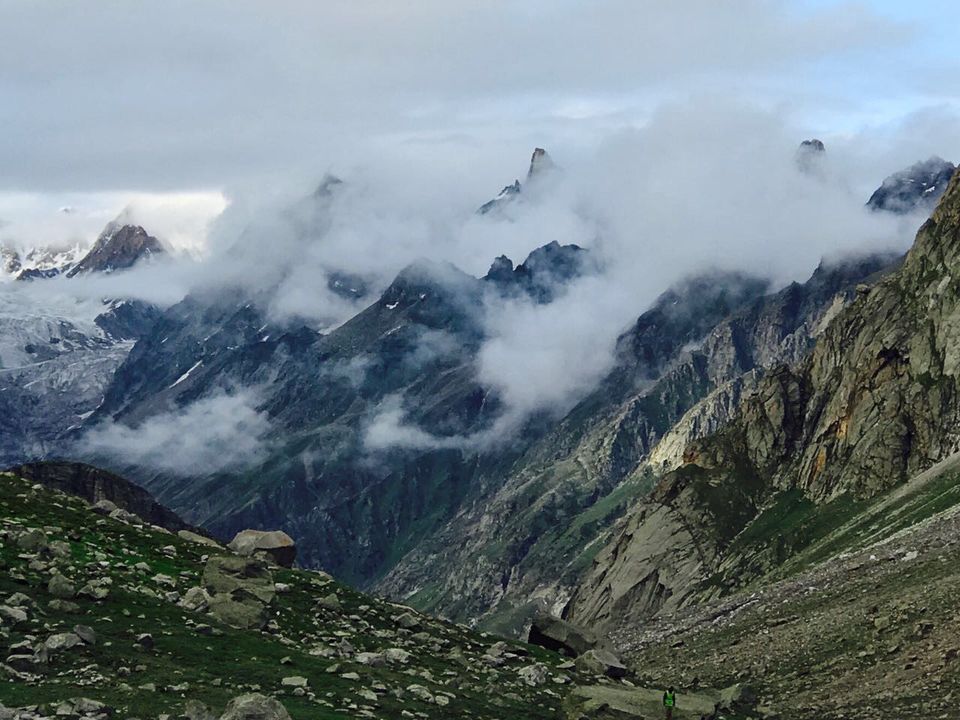 Some travels are unexpected, in a way that they challenge you not only physically but also mentally.

Well our trek jolted our emotions at every point, the beauty of Himachal’s landscape and the warmth of the people.

We wanted to make it a raw experience and trek on our own with minimal support.

Our journey started from Delhi, where we took a HRTC bus to Manali. According to our plan we would find a way to get to the base village of Hampta pass trek which was Jobra (The locals call it Jobri) . However, there was no local transport to the place as it is a private road built by a company. On the Manali bus stand we happen to meet a local who after talking to found out was also a guide with Indiahikes(Ravi). He offered to help with transport, till Jobri through his contacts. We were lucky to find him, he also paid for our short bus journey as we moved closer to the base village.

Even while on the local bus, Himachali people welcomed us with there warm smiles. The feeling of having arrived in the mountains.

We took an Alto to the trek base which was around 18 kms from Manali, and looped through 42(yes 42) hairpin bends. With every bend, the mountains grew larger and the views ever so mesmerizing. There were apple orchards all along with green and reddish apples adorning the trees.

After traveling for a while we reached our Start point, bid adieu to our young driver who was quite able and smart (owned an iPhone :P ).

We started our trek from Jobri, our plan was to reach Chika for the day which was around 4 km. The trail was beautiful with the Rani Nalla (water stream passing next to us) as we moved on.

The picturesque mountains greeted us across all ends, kept us completely engrossed. We met people from different groups and walks of life through our hike.

We reached Chika around 3 PM and searched for a place to put up our tent. a group of trekkers who were from the Kailash rath group offered to use a place near their tents graciously. We camped along with them and also interacted with these guys who were pretty friendly, a guy from airforce, few people who owned a business and had traveled from Gujarat to attend the trek.

They offered us their food and also some help in terms of route of the trek. We decided let’s trek along who wouldn’t want company in the mountains

Day 2 of the trek we moved from Chika towards Balu ka ghera. The trek saw us trudge through waterfalls, pass green meadows and interact with some wonderful locals along the way. We had some yummy rajma rice in lunch and laughed along the way. The camp was beautiful. We put up our tents and went to see a glacier close by. Walked on it, little that we know we will have to walk on 3 4 of these the next day when we were to summit Hampta Pass. We clicked several pictures on Day 2 and had chatty conversations about life all of us stuck inside one tent.

We started next day towards our destination the Hampta Pass. We had to climb snow patches which were pretty vertical and having never done it before, felt a bit nervous without crampons. After walking a few kms it started raining heavily mixed with the cold made it tougher for us, but was a hell of an experience.

We reached Hampta Pass around 1pm after a long trek but saw no views, the cloud gods didn’t show mercy ;)

Since it was getting a bit cold we decided to trudge on to our next campsite Shea Goru. The campsite was beautifully laden with small flowers ???? ???? ????

The views were splendid and we were greeted by yummy Rajma chawal, food to die for on the trek definitely. Took a quick nap and later explored around the campsite took countless pictures.

This was the last day of our trek as we moved to the Spiti side of the trek, Chatru. Hampta pass as you know is a cross over trek from Kullu valley to Spiti valley. After trekking about 5kms we were encountered by a patch of snow which had a steep downward slow and was pretty challenging my shoe slipped at one point thought would slide down but didn’t :P

This trek helped me gain confidence, interact and meet new people. Would never trade anything for experiences.

NOTE: I urge you all to take a local guide when trekking in unknown territory. Some experiences cannot be had without a local.

As much as you can.

As far as you can

As long as you can.

Life’s not meant to be lived in one place.