Jerusalem Travel GuideJerusalem TripsIsrael: A Drive Back In Time In The Land Of The Gods

Israel: A Drive Back in Time in the Land of the Gods 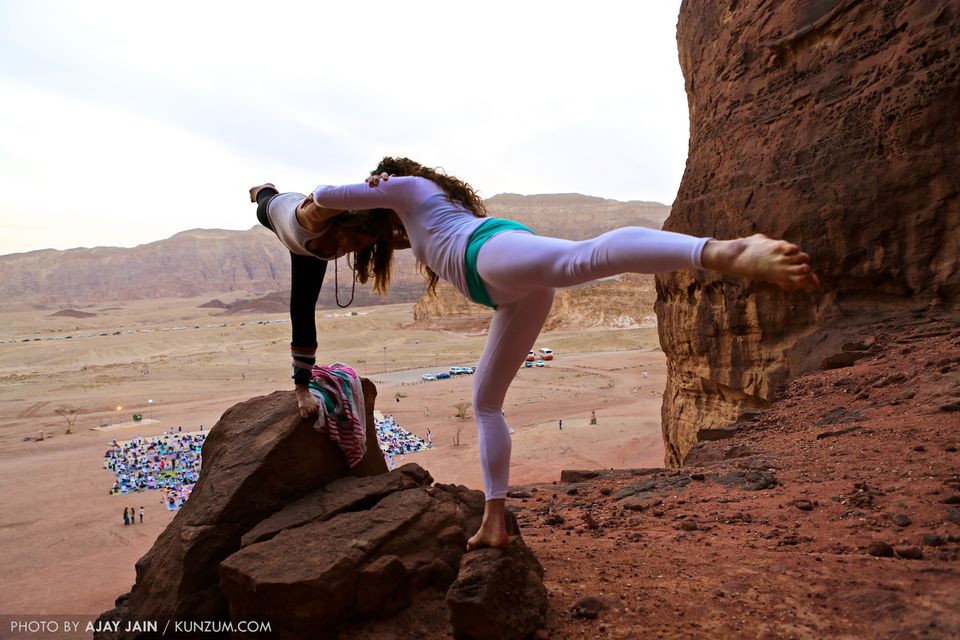 You heard me right. Israel is as much a travel destination as any other wonderful spot on the planet. Shed your doubts and book a flight.

The immediate concern, not unnaturally, may be one of safety. What we hear in the news need not be taken with much alarm. It is life-as-anywhere-else in much of the country. I drove across the country for 10 days and cannot wait to share the stories. And am restless to go back again at the earliest opportunity.

Israel has much of what a traveller desires – stunning landscapes and man-made structures, awesome food, shopping, history, culture and adventure. Above all, its people are warm and friendly – with a zest for life and living. Their circumstances have not made them bitter; rather, they seem to believe in cherishing every moment they have.

If this is not enough, here are 7 attractions to prompt you to plan a holiday to Israel in the near future - enough to feature the country in the Kunzum 100 Great Journeys. The list is incomplete – I have to go back for more.

The Drive, the Walks, and the Food

The best part of my trip was the pace we set. I was fortunate to have a great guide, Ron Harari, who took me around in his van. We started from Tel Aviv and covered Eilat, Timna Park, the Dead Sea and Jerusalem before returning to Tel Aviv. Driving around is the best way to see the country – there is so much along the way that the drive seems the destination itself. And when you are not driving, it is best to walk. As much as you can. There is little and big stuff at every nook and corner of Israel that you would miss if you were not on foot.

And the cherry on the top? The food. I am a vegetarian, and it is not often that I travel overseas and come back delighted with the food. The Hummus, the Pita, the Falafel, the salads – there is all this and lots more for those who love to eat. The cuisines on offer can be reason enough to visit Israel.

Eilat on the Red Sea

The Dead Sea is literally dead. In contrast, The Red Sea is as alive and rich as any place can be. I was there for only a day, but I realized I can plan a complete holiday in Eilat itself. It’s extensive beaches invited me to laze around, and gaze at adventure seekers getting thrills in and on the deep blue waters of the sea. Visitors and locals could never seem to have enough of adventure sports including wind and wave surfing, sail boating and parasailing. Then there were those taking leisurely rides on paddle and banana boats. I missed out on snorkelling and scuba diving to explore the Coral Reef Reserve, as well as a chance to swim, dive and be photographed with a friendly family of dolphins at the Dolphin Reef. But I did have time for seeing the wonders of the sea world without getting wet at the Coral World Underwater Observatory. Its collection of pools and aquariums are an expo of sharks, corals, sea turtles, and all kinds of rare fish and other life in the oceans. I literally had to be dragged out by my guide – but not before I managed to pick exquisite replicas of a sail boat, an anchor and a star fish at the souvenir shop. I feasted in Eilat’s restaurants – you get the best of cuisines from across the world, but had no energy and time left for bargain shopping. Eilat is Israel’s only tax free zone.

Can you imagine performing yoga with a group of hundreds under a full moon sky in a desert surrounded by cliffs and windswept structures? That’s what I witnessed at the Timna Park, known for its stunning landscapes and a fascinating history. Drive, cycle or walk around and see a naturally cut mushroom shaped rock, a spiral hill, arches and other strange formations that Nature carved out. The park has the remains of the world’s oldest copper mines – going back 6,000 years. This is where people first learned to use copper or, for that matter, any metal leading to a technological revolution. Egyptians established significant mining interests here. The annual yoga festival was held against the backdrop of Solomon’s Pillars; these sandstone pillars were named after King Solomon due to an earlier mistaken belief that copper mining activities in the area were a part of Solomon’s activities. If the yoga in the desert was not mesmerising enough, dinner and soulful middle-eastern music at the artificial Timna lake was truly the perfect end to the visit.

The Dead Sea, the lowest point on the planet, is a must for every visitor to Israel. I had dipped, actually floated, on the Jordanian side of the sea a few years back. You cannot sink in it no matter how hard you try; trying to swim is not a good idea either. It’s black mud is believed to have therapeutic and rejuvenating qualities for the skin – apply it if you want to. I didn’t. And don’t allow even a drop of the water to enter the eyes – it causes a burning sensation. And tasting the water will leave a bitter taste for a while. For me its blue waters, though lifeless, were beautiful enough. The rising and setting sun giving the sea a golden hue, and a near full moon reflecting in its waters, only made it more enchanting.The Dead Sea in Israel

Every country has stories and legends that all its citizens know of, and they can never tire of recounting these to all those who care to listen. Such is the story of Masada, a UNESCO World Heritage Site near the Dead Sea. A palatial Roman style fortress on a hill approached by cable car, it was built by Herod, King of Judea. Masada is famous for a story that sure gave me goosebumps. To put it concisely: In 66 A.D., the Great Revolt of the Jews broke out against the ruling Romans, and a group of rebels lead by Eleazar Ben Yair fled to Masada from Jerusalem when most was lost. The Romans laid siege to the fortress to break down the last remaining resistance in 73 or 74 A.D. Figuring they could not hold out against the overwhelming Roman Legion, Eleazar Ben Yair convinced all 960 men, women and children to take their own lives than be subject to the humiliation and shame of being Roman slaves. Only two women and five children survived whose accounts tell us of this history. Every Israeli has grown up listening to stories of this bravado.

I found the fortress fascinating, especially when my guide Ron was showing and telling the unfolding of history at various sections that remain. If we didn’t have to move on, I could have spent hours looking at the scenery around: the Dead Sea on one side, and cliffs and the desert all around.Inside Masada, near the Dead Sea in Israel

When we drove into the city, I was expecting a war-ravaged city, one in half a ruin. Even now when I think about it, I am surprised how beautiful and well maintained the city is.

The city is not called the centre of the world for nothing. It is the birthplace of three major religions – Judaism, Christianity and Islam. No other place on the planet has been creating history every minute since its inception as Jerusalem has been. The city seems like a walkthrough of recorded history of mankind – archaeological sites, synagogues, monasteries, churches, mosques and museums are to be found in abundance.

I can write reams about Jerusalem – much more has already been written, and no single literary work can claim to be an all-encompassing guide and record to the city. Time was again not a luxury, and the Old City had to be priority. It is striking to see some of the holiest shrines of the three religions standing adjacent to one another – people from all over the world make a confluence here out of religious or touristy interest. Christians have the Church of the Holy Sepulchre, supposedly the spot where Jesus was crucified, buried and resurrected. The Western Wall is considered the most sacred in Judaism. And then you have the Dome of the Rock and the Al Aqsa Mosque for the Muslims. The energy touched me, prompting the question: Why cannot there be greater peace and harmony when common people are happy to practice their faiths next to each other?

I got a panoramic view of the city from Mount Scopus; the more popular Mount of Olives had to be skipped due to a volatile political situation while I was there. Our guide took us for a walk to the Machane Yehuda open bazaar giving us an insight into lives of the locals – going about shopping for food supplies, offering prayers, socialising over a game of backgammon, and feasting at eateries of all kinds. Jerusalem too deserves its own itinerary; there is so much to see and do. Next time.

We got only a few hours in Tel Aviv, located on the Mediterranean Sea; the Old Jaffa district here is an 8,000 year old port city. But within this time too I managed to come back no less impressed than with the rest of Israel. Walking around the cobble-stoned artist quarter, I felt like buying half of what was on offer. Going through its flea markets was like being in India; much of what was on sale had come from India. Time did not permit me to book a boat and head out to sea. But I did manage a coffee at one of the many beautiful cafés overlooking the waters as the sun set, making the environment surreal. And then it was time to drive to the airport.