Have you ever seen a place and felt the way as you do when you listen to your favorite piece of music? Chopta in the state of Uttarakhand performed this feat effortlessly. I was oblivious to the presence of this magnificent place until my father proposed to drive there during my stay with a friend in Gopeshwar in the mid-June. An elixir like wind flew across my face while I admired the mountain peaks that concealed and revealed itself with the help of the mist. I gawked at the establishments located in these peaks that seemed out of reach and wondered about the inhabitants there who perhaps lived in the company of clouds. At the end of a two hour ride from Gopeshwar via Mandal we reached Chopta which serves as the starting point for the Tungnath-Chandrashila trek. The dhabas there cater to some of your trekking requirements.

Ten minutes into the trek I realized that I had highly underestimated the difficulty level of the trek by perceiving the 5km distance in terms of the plain terrain which speaks volumes about my inexperience in trekking. However, the paved pathway and benches on the way makes it easier. After three years of negligible work out, the physical exhaustion resulting from the hike felt surprisingly good. The surroundings stirred the Alice in me since the flora and fauna that marked the place make up their own wonderland. Various sources tell me that the flora I witnessed was pine, oak and rhododendron(buransh) and I also remember my father calling the pastures bugyal. The green color of the landscape flooded my eyes and soothed my senses. On our way we stopped at a shack to feast on chai and parle-g, the comfort food to ward off exhaustion. In another half an hour, we reached the Tungnath temple.

The temple is situated at a height of 3680 m above sea level which can be attributed to the Pandavas if one believes the myth that it was built by Pandavas post the bloody Kurukshetra war in an effort to absolve themselves of the sin of killing their own brethren. It is the highest shrine of Lord Shiva. Even though I wanted to hang out with an amiable dog I met at the temple, I went inside the sanctum to satiate my curiosity. While we were looking at the other shrines in the temple, it started to drizzle. Since the weather didn’t seem favorable to continue trekking, we seeked refuge at a hut which offered food along with warm hospitality. Aloo ka parantha served with sabzi cooked using the local produce of green vegetables made for a delectable meal and gratified our taste buds. The heat from the burning firewood and the aroma of food provided some relief from the biting cold. Half an hour elapsed before we decided to continue our journey uphill.

We had to proceed through a narrow, uneven path behind the Tungnath temple where the stones were still wet and slippery from the rain. The path got steeper now and I could feel the lack of oxygen. As we reached closer to the peak, the meadows were adorned with pastel yellow flowers and when I turned around to capture them, it seemed that they were vanishing into the mist. We were overcome with sheer joy when we reached the peak. Perhaps my spirits should have been dampened by the sight of fog covered mountains of the Himalayan range but I stood there spellbound glancing at the ethereal beauty that I was in presence of. However, we were also watched over by a crow that perched on the topmost stone on the temple that had been built there. While we were breathing in the divine air and hoping that it would undo the effects of the toxic air, the fog started clearing a tad bit. And even though we could not distinctly see the numerous mountains (some of them being Chaukhamba, Neelkanth, Nanda Devi and Kedarnath) that form the Himalayan range, which was more than I had ever seen. Honestly, it takes pictures to refresh my memories of the trek but the serenity I experienced seeped into me and shall always exist within me.

The downhill journey took about 30 minutes or a little more. With every step I took I could feel my leg muscles aching which was a fair price for the splendid experience I had.

(The pictures I clicked do not do justice to the place. As sacrilegious as it sounds to me now, I was avoiding the use of camera a teeny bit perhaps because of occasional complaints I receive from friends who ask me to click them).

Chandrashila peak is located in the Garhwal region of Uttarakhand. Chopta serves as the starting point to reach Chandrashila which involves around 5 km of trekking. People mainly undertake this trek because of its moderate difficulty level, to visit the Tungnath temple which is the highest shrine of Lord Shiva and to gaze at the breathtaking view that the peak offers of the various snow-capped mountains in the Himalayan range. However, I won't be surprised if someone visited this place to wake up in the presence of sheer beauty and seeking to resolve inner conflicts in the Wordsworthian fashion. 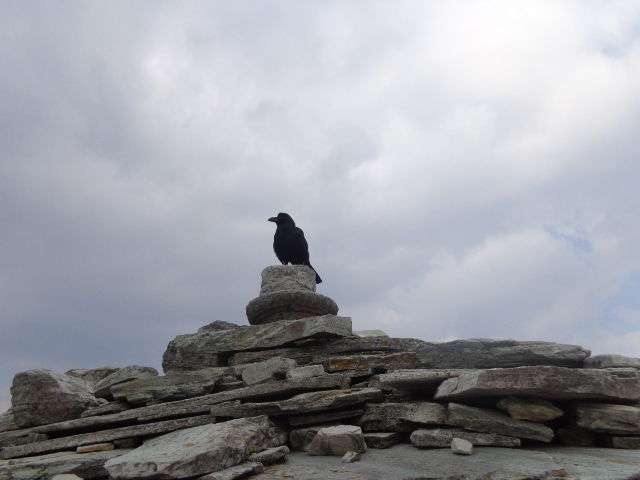