Jordan: A Country Of Wonders | #100Greatjourneys

Jordan: A Country of Wonders | #100GreatJourneys 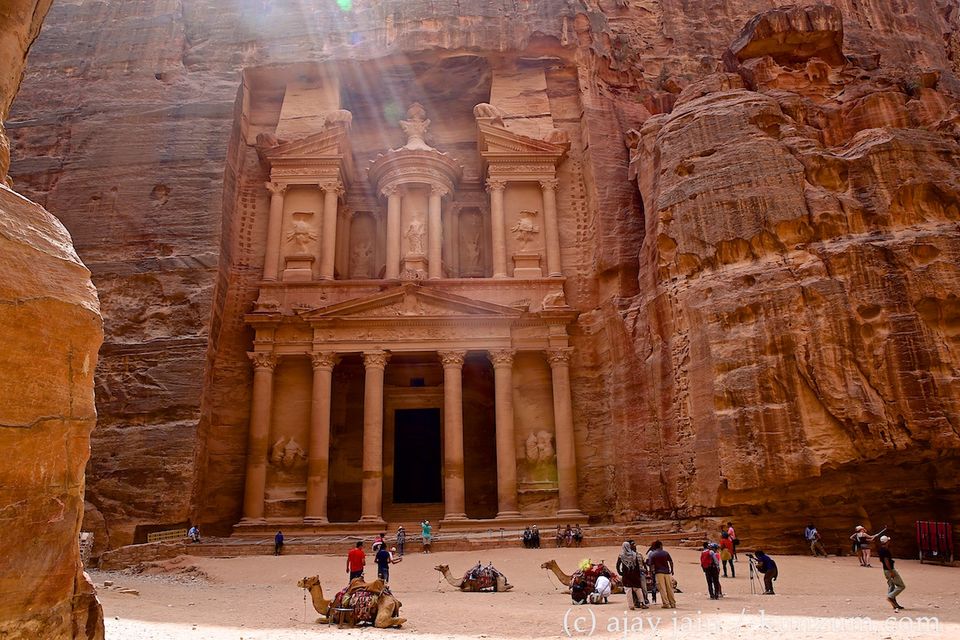 I have been to Jordan twice and can go back a few more times. Not just to re-visit the wonders I have already experienced but also to discover new ones. And to meet even more Jordanians - they are a wonderful lot to put it simply.

Despite being surrounded by noisy and quarrelling neighbours, Jordan bought its peace decades ago. It is literally an oasis of calm where multiple nationalities, religions and histories co-exist in harmony. The country its proud of its heritage, and its manmade and natural wonders. A destination fully deserving to feature in the Kunzum 100 Great Journeys.

This is likely to be the day you land in the capital Amman, located on a hill between the desert and the fertile Jordan Valley. Depending on the flight timings, you may or may not have time and energy to go around the city. If you have the evening free, head to The Citadel. In any case, go for a traditional Jordanian / Arabic meal in the evening - you will love the cuisine. Sleep well at night.

This will be your first full day of excursions. Head to Jerash - one of the best preserved Roman provincial towns in the world. You can easily spend half a day here. Drive to Ajlun Castle from there - an hour should be enough for the visit. Head back to Amman for an evening at The Citadel if not done the previous day. Spend the evening on Rainbow Street for a restaurant and bar crawl - it is ok to feast while on holiday.

Start the day with religious tourism in Madaba, Bethany and Mount Nebo. After a few hours there, head to Petra, truly one of the wonders of the planet. How the Nabataeans carved such a gigantic city out of rock faces confounds the mind. You can never get enough of this UNESCO World Heritage Site. Recommend you spend all daytime hours here - and then go in for a night viewing too; the latter is not always an option as it is open only on select days of the week. Walk the short market street of Petra town in the evening, and grab a bite in one of the many restaurants there.

Spend the full day in Petra, and also make a side trip to Little Petra - it is, as the name suggests, a smaller version of Petra and has its own charm.

Head to the Red Sea port city of Aqaba - for a day of water sports and snorkelling to get a closer look at corals. Spend the night here.

You could spend the morning out in the sea in Aqaba. And then drive to Wadi Rum for its maze of monolithic rockscapes rising upto 1,750 metres from the desert floor. T. E. Lawrence of Arabia and Sharif Faisal Bin Huessin based their headquarters in Wadi Rum during the Arab revolt against the Ottomans in World War I - those who have seen the film Lawrence of Arabia will know. Wadi Rum was in the news again recently - depicting the planet Mars in the film The Martian starring Matt Damon.

Wadi Rum is best enjoyed in the evening when the sun is setting - if you can, spend the night stargazing in one of the camps in the desert. Head to the Dead Sea if not staying overnight here.

Spend the last day of the trip floating lazily in the Dead Sea - the lowest spot on the planet. You could be here for a few hours or overnight; don’t forget to get yourself pampered in one of the many spas in hotels along the sea. Head out to Amman from here to catch your flight back.

JORDAN: OVERVIEW OF ITS ATTRACTIONS

Located on the highest hill of Amman, The Citadel or the Jabal al-Qala’a gives a bird’s eye view of the city and also a sense of the history of the region. There is evidence of settlements going back to the Bronze Age (3300 - 1200 B.C.). Excavations there have revealed numerous Roman, Byzantine, and early Islamic remains. You can spend hours here but the most striking sights are the Temple of Hercules and the Ummayad Palace. Seen in this image are the hand and elbow fragments of a colossal statue from the Roman period with the Temple of Hercules in the background.

This 6,000 seater structure was built in the 2nd century A.D. when Amman was known as Philadelphia. Many cultural activities still take place here.

The Graeco-Roman city of Jerash, formerly Gerasa, is situated in a fertile valley, less than an hour’s drive north from Amman. Known as the ‘Pompeii of the East’ for its extraordinary state of preservation, Jerash is the largest and best-preserved Roman city outside Italy. It was hidden for centuries in sand before being excavated and restored over the past 70 years. Its outstanding architecture is clearly visible in its paved and colonnaded streets, soaring hilltop temples, handsome theatres, spacious public squares and plazas, baths, fountains and city walls pierced by towers and gates. If you are lucky, you might get to see mock chariot races or a performance in one of its theatres. Every year, during July, this ancient city comes to life when the annual Jerash Festival of Culture and Arts takes place.

Ajlun Castle (Qal’at Ar-Rabad) was built by Saladin’s general in 1184 AD to control the iron mines of Ajlun, and to counter the progress of the Crusaders by dominating the three main routes leading to the Jordan Valley and protecting the communication routes between Jordan and Syria. It is a fine example of Islamic architecture dominating a wider stretch of the northern Jordan Valley. It is perched high on a hilltop surrounded by pine forests and olive groves. Close to Ajlun is Anjara, a Christian pilgrimage site where Jesus Christ, his mother Mary, and his disciples passed through and rested in a nearby cave now commemorated as the Church of Our Lady of the Mountain.

Madaba is one of the most memorable places in the Holy Land. Dubbed “the City of Mosaics,” most of which are at least 1,400 years old. The most famous of them is the vivid Byzantine mosaic map of the Holy Land (c.560 AD) in the Greek Orthodox Church of St. George. It contains over two million pieces of stone tesserae and is believed to have taken six years to make. Clearly visible on the remarkably detailed map are Jerusalem, the Dead Sea, the Jordan River, Jericho, Nablus, Hebron, the Nile Delta in Egypt and southern Lebanon. The image here shows a part of this map. You can walk the streets of the town seeing artisans making, repairing and restoring mosaics. Buy some for yourself.

Two millennia ago, the area opposite Jericho was identified as the place where Jesus Christ was baptized by John the Baptist, making it one of the focal Christian pilgrimage sites. The area known as “Bethany Beyond the Jordan” has been discovered between the Jordan River and Tal Al-Kharrar (St. Elijah’s Hill), not too far from Madaba. A cave was discovered where John was living when he baptized Jesus. It is from this hill that he ascended to heaven in a chariot of fire. Findings from the early 1st century AD confirm the site was inhabited during the lives of Jesus and John the Baptist.

Moses is believed to have been buried at Mount Nebo and it is therefore the most revered holy site in Jordan. When atop this mountain, one can see as Moses did the vast panorama after leading his people from Egypt across the Sinai Desert to the Promised Land. The view encompasses the Jordan River Valley, the Dead Sea, Jericho, and Jerusalem, often referred to as the Holy Land. Mount Nebo’s first church was built in the late 4th century to mark the site of Moses’ death. It remains a place of pilgrimage for Christians as designated by Pope John Paul II.

If there is a man-made wonder on this planet, it is the Nabataean city of Petra going back 2000 years. Your trip to Jordan cannot be complete without Petra. The journey into Petra starts through the Siq, a very narrow gorge, about one kilometre in length, flanked on both sides by towering rock walls that reach a height of 70 metres. At the end of the Siq is the Treasury (the Khaznah) with its massive façade carved into the solid rock face - this is the defining image of Jordan. The rose-red city of Petra lies beyond, with its endless tombs and temples, its huge theatre and fascinating high places.

Petra was an important junction for the silk, spice and other trade routes that linked China, India, and southern Arabia with Egypt, Syria, Greece, and Rome. The Nabataean Kingdom existed for centuries, and Petra became widely admired for its refined culture, massive architecture and ingenious complex of dams and water channels. Ultimately, however, the Roman Emperor Trajan annexed the Kingdom. By the 14th century, Petra was completely lost to the West, and so it remained for almost 300 years. Then in 1812, a Swiss traveller, Johann Ludwig Burckhardt, persuaded his guide to take him to the site of the rumoured lost city. Secretly making notes and sketches, he wrote: “It seems very probable that the ruins at Wadi Musa are those of the ancient Petra.”