Karahunj - The Prehistoric Stonehenge of Armenia 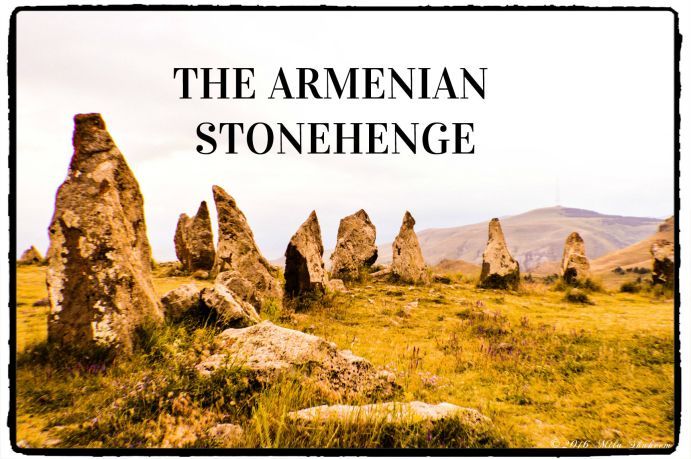 We have heard, visited and even learned about the Stonehenge of Wiltshire, England, as an Astronomical Observatory built 3000 years ago. But Armenia has a much earlier version of the Stonehenge to be proud of. They are the Karahunj - located in the Syunik Province of Southern Armenia, in the city of Sisian. Archaeological evidences show that these pre-historic megalithic structures are in existence since 7500 years, which mean they were built even before the Stonehenge and the Pyramids!!

These stones are perched upon a mountain plateau and the place can be best reached if you are driving a 4X4 as the pathway uphill is hardly drivable. Ours was not a SUV,so had to park downhill and then hike up to reach the Stones. I would suggest to hike this little distance enjoying the beauty of the mountain surrounding and the beautiful scent of lavender, poppy and many other wild flowers wafting in the wind. It's a sight you would want to save in your grey forever.

Karahunj was our final destination (while returning from Tatev to Yerevan -Sisian falls enroute) on our tiring long day trip from Yerevan. Karahunj is accepted as one of the oldest monuments in the world, though I'm not sure if it is an UNESCO Heritage Site. Some archaeologists claim that the purpose of these structures were as Astronomical Observatory while some claim that they were Necropolis.

We entered the fence to the vast field of greenery and lots of tall stones that has been numbered (by the archaeologists) and placed in a particular fashion. Most of the stones have moss and what not growing on them... and the stones are reddish in color. Some stones had circular hole cut into them - probably some sort of viewing point. The tourist info center guide explained that the stones are aligned in a certain fashion & degree to comprehend the stars, solstices and other astronomical calculations. Visitors are not allowed to touch the stones.

Karahunj is composed of several groups of structures and separate stones that make up the megalithic monument of the complex, which includes the central circle made up of 40 stones, northern and southern wings, north-eastern road, and a cord crossing the circle and separately standing magnificent stones made of basalt with their height ranging from half to three meters and with their weight up to ten tons. Stones of Karahunj were brought from the nearby stone mine of Dar river canyon. They were raised and moved through by means of the woven ropes and yoked animals and holes were opened in the rocks of the observatory and astronomical instruments were prepared there. (Source: Slav Travel)

The sunset at this wonderful spot was captivating (my camera did no justice to that) but the increasing strength of the wind and dropping temperature forced us to depart from this ancient site (even though the guide was willing to allow us beyond the visiting hours). He was excited to have (two) Indians visit the site and said hardly any Indian had visited this site except for some of the University students from Yerevan.

I was elated to have visited such an ancient site, be mesmerized with the wilderness and surrounding natural beauty.... Plucked a handful of poppies without being sued (Lol), took great selfies with the lavenders and bluebells.... And lot of memories back with me...

I suggest to include this site in your Armenian itinerary rather than limiting yourself to the monotonous itineraries...

Caution: Keep a shawl or cardigan handy when you visit this site. (Do not get tricked by the climate in Yerevan on the same day as different parts of Armenia has different climatic conditions). Wear good footwear to facilitate your hike up the unpaved road.