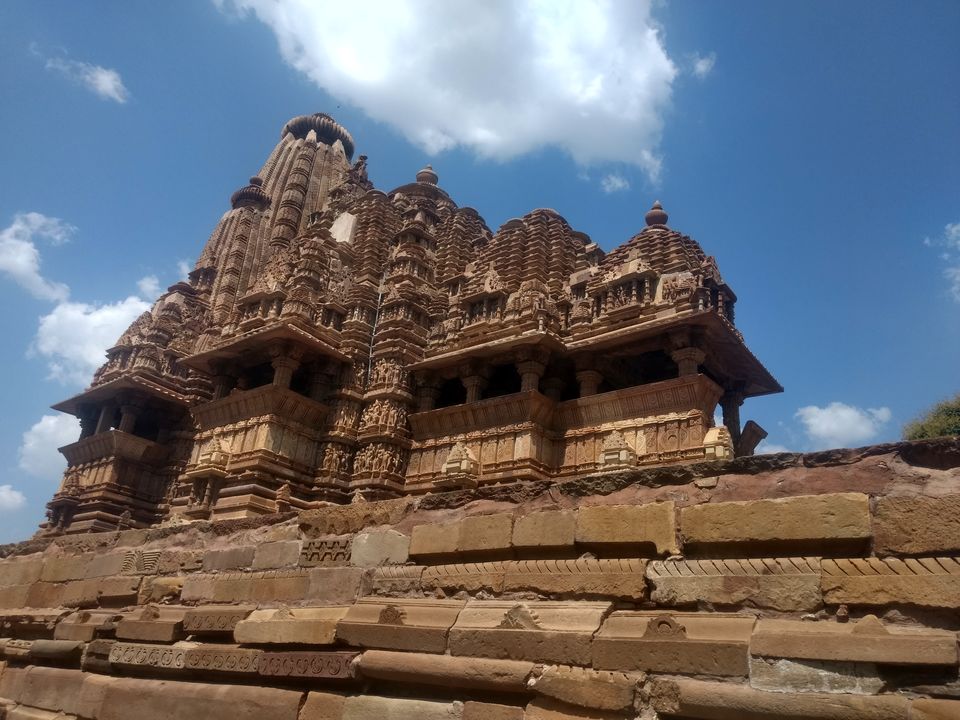 Soonafter my birthday on 26th of September , 18 ,It was time for me to leave with my friends on 27 September to Khajuraho we all over quite enthusiastic to visit the place because a lot of stories go around. We boarded Udaipur Khajuraho Express(19666) from Gwalior Junction Railway Station Platform no. 1, the train has its origin from Udaipur and had to reach Gwalior at 1:40 pm but it was delayed for about 30 minutes, me and my friends reached the station and one of us got the general ticket for the train costing 120 bucks each. Train came along and we sat down on the empty births waiting for the ticket checker to come ,as soon as he came we got our tickets made by paying the extra charge and allotted four seats.It takes around 8 hours to reach Khajuraho , the train runs late around the areas of Mahoba generally.

POINTER- Always take a general ticket by the name ‘superfast’ to avoid any kind of penalties.

We reached Khajuraho around 8:15 pm , the station is small yet beautiful having temple like architecture used ,maintained and properly cleaned up.We got down and started to look for transport, In Khajuraho there are government authorized Autowalas who have fixed rates i.e 150 but you can always bargain. I and my company took the auto and we reached city center area where all the budget hotels are lined up, we stayed at ‘JAIN HOTEL’ and went out for dinner at the ‘HOTEL SURYA’. The day was exhausting and we slept .Early morning around 7:00 am we left the hotel and had poha around the corner which was paisawasool.

POINTER: The railway station is in the outskirts ,one should be careful and alert enough.

POINTER: The eastern group is exclusively related to Jainism.

From our hotel the western group was around 1 km only so we walked the distance, On the main road , besides the path towards the Matangeshwar Temple lies the counter of A.S.I counter for tickets ,there is entry fee of 10INR and 500INR for the foreigners.As soon as we took the tickets a number of government certified guides came along for helping us with the sightseeing.We started to talk and to our surprise they all were trained by our institute only (IITTM GWALIOR DEALS WITH THE GUIDE TRAINING PROGRAMME) ,seeing their fluency and command over the history architecture and culture of the place I was quite motivated but still fearful for the next day as it was I who was going to conduct a walk as leader at the Kandariya mahadev temple.Our group visited the Vishwanath Temple which is to the right side as we enter ,the temple is dedicated to lord Shiva and has a nandi shrine just infront of the temple.Enoying the scenic beauty we moved towards the grand and most fine Kandariya Mahadev temple , laxman temple was our last stop the most temple with rich and most exotic sculptures out of the group .Later we sat down near an eatery inside the temple complex and had Maggie (all time favourite).

It was evening time we moved out I also purchased a booklet which was pretty informative and deals with the detailed description of the temples and the history of Khajuraho.I along with my friends decided to have some street food we had chowmein from one of the stalls nearby ,then appe(south Indian stuff) we also had golgappe and dahi puri (which were totally a disaster). So now as I already mentioned above that I had to deliver a walk the next day so I started gathering all the information which took around 4 hours to be honest but I was all set for the big day among the big people( the tour guides of Khajuraho were to be present next day),I woke up early frankly could not sleep the whole night .

All of us got ready and again had poha at the corner ( 20 INR ONLY) As I arrived I saw one of my friend from Panna who came all along to the walk.It was 8:00 am and all the people gathered and I began the walk with the brief history of Chandellas the makers of the temples who were one of the Rajput clans who claimed to be the descendents of ‘ Chandra kula’ descendents of the moon and ruled over the central part of India for about five centuries. They are famous as the kings of ‘ jejakbhukti’ old name of Bundelkhand.There are a number of folklores carried from generation to generation , the famous one is the ‘story of Hemavati’.As and when me and the group reached the temple , the history culture architecture just flooded in.

POINTER: The architecture of Khajuraho temples is based on hindu philosophy of DHARMA, ARTHA, KAMA , MOKSHA. The sculptures carved are full of richness and profuse. Precisely there are four divisions of the sculptures;

• Cult images based on Shilpshastra

As we moved into temple premises which we call it mandapa and ardhamandapa ,there is a white marble shiva linga which is worshipped in devsthan. The temple is made out of red sandstone and interlocking mechanism.After three hours of delivering the walk content , leaning and understanding the best about about Indian architecture and iconography from the renowned Anurag Shukla Sir I felt satisfied and overwhelmed by the respect and hospitality of all the people.

• Largest and loftiestamong all the temples with a height of 31 metres.

• Originally it was ‘panchayatana’ like the typical Chandella temple but now for subsidiary shrines donot exist.

• The temple is the representation of the abode of lord shiva i.e Kailash.

• Temple has around 800 carved sculptures.

The day ended on a happy note with the refreshment served by the Khajuraho tourism .Soonafter we reached the hotel and checked out of the hotel around 12 in the noon and reached railway station by an auto at 60 INR only (shocking). I quickly checked the earliest of the trains and came across the Jhansi Passenger (51822) We reached Jhansi Junction around 7:00 pm the train travelling on a general ticket in a passenger train was quite a challenge .All day hungry we took some handy stuff from the station and got the general tickets upto Gwalior which costed 60 INR per person, Gwalior Barauni Mail(11123) just arrived via Kanpur and we quickly grabbed the seats as the train goes empty from Jhansi and reached Gwalior around 10:30 ( hell of a journey it was), reaching Gwalior was sigh of relief as we booked an Ola auto and reached our college.

The temples of Khajuraho are the depiction life, reliogion and sex(generation of life )

Sex is considered as a sacred tie and society had no stubborn stigma about it from the times of Rig veda.