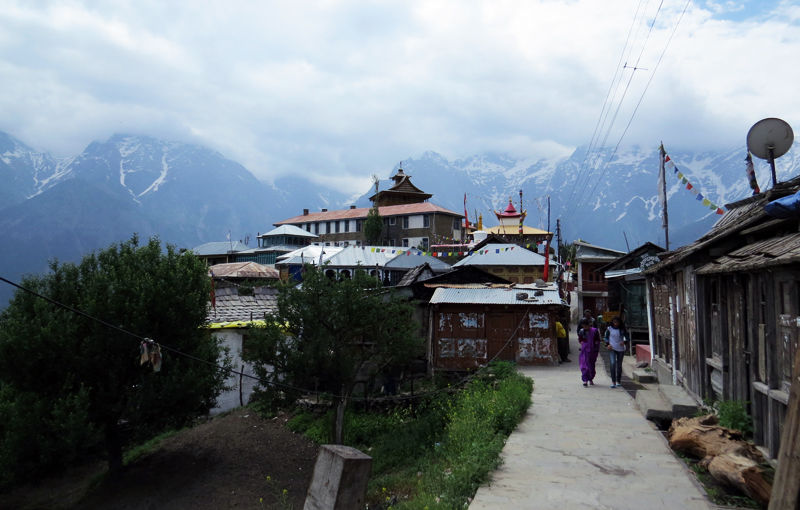 The road passes through half-tunnels 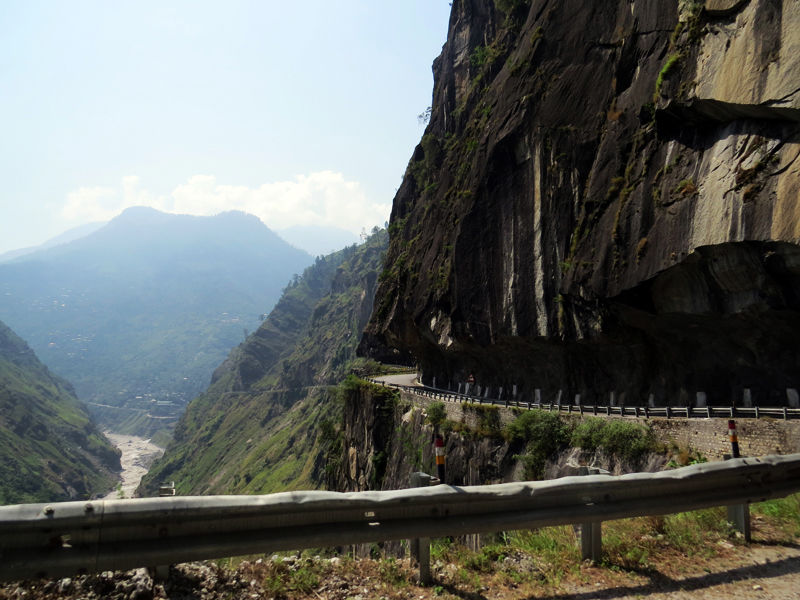 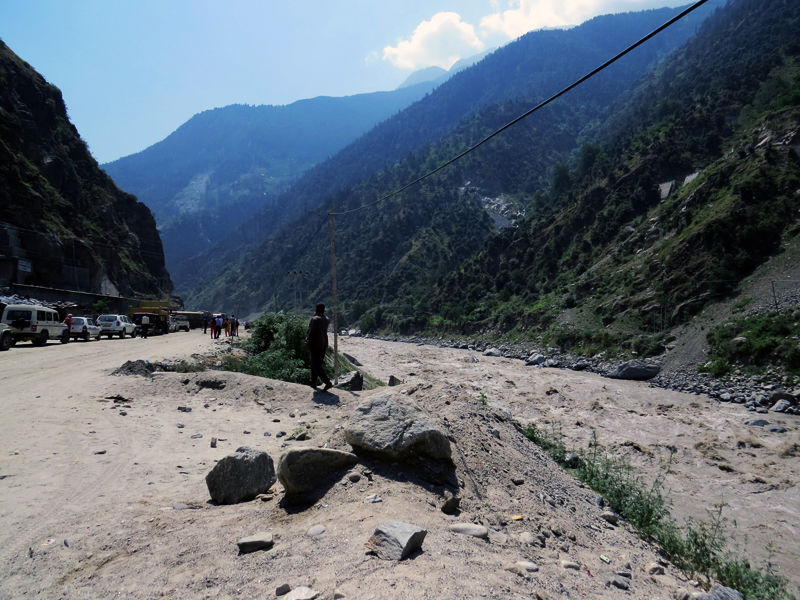 The winding roads to Kalpa 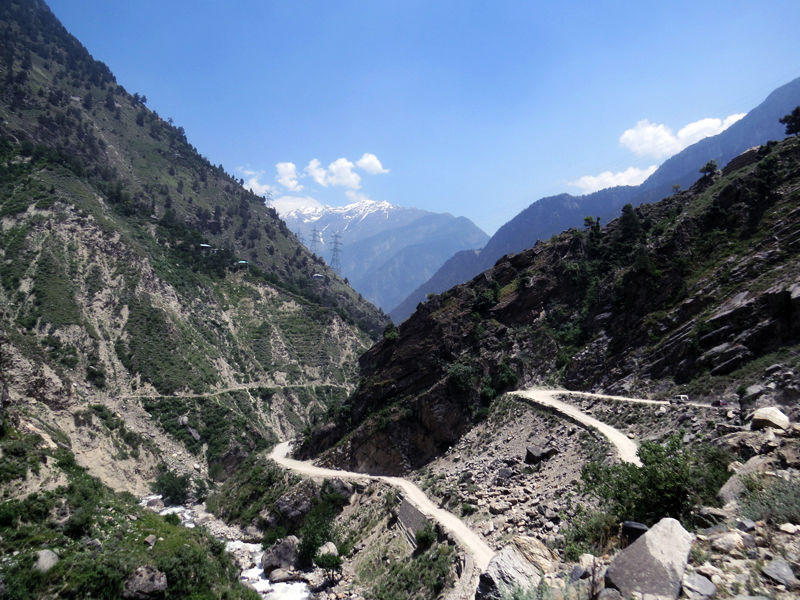 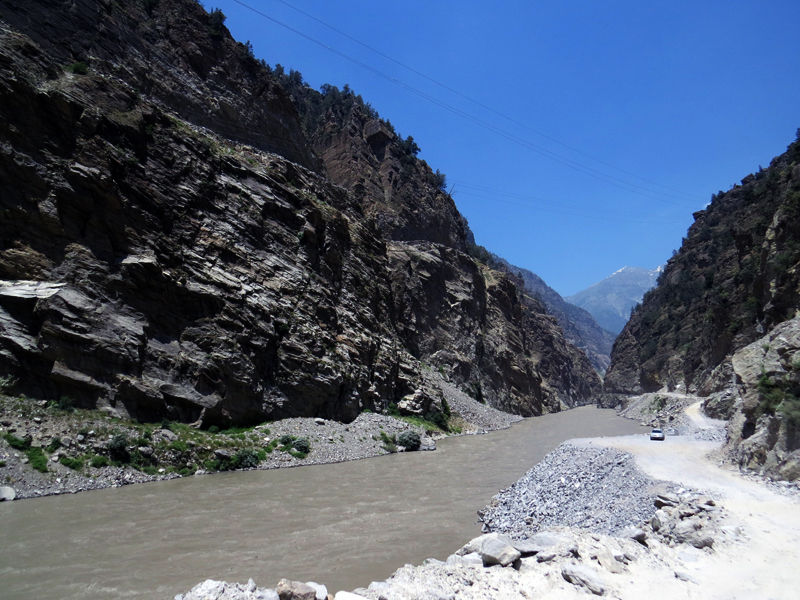 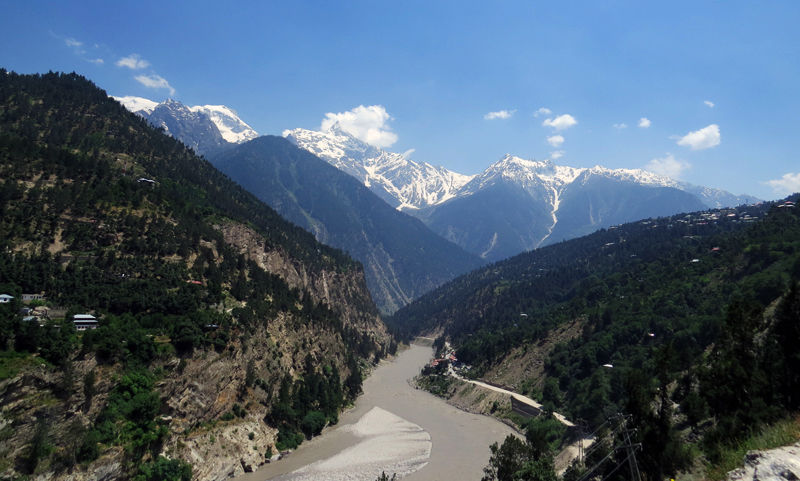 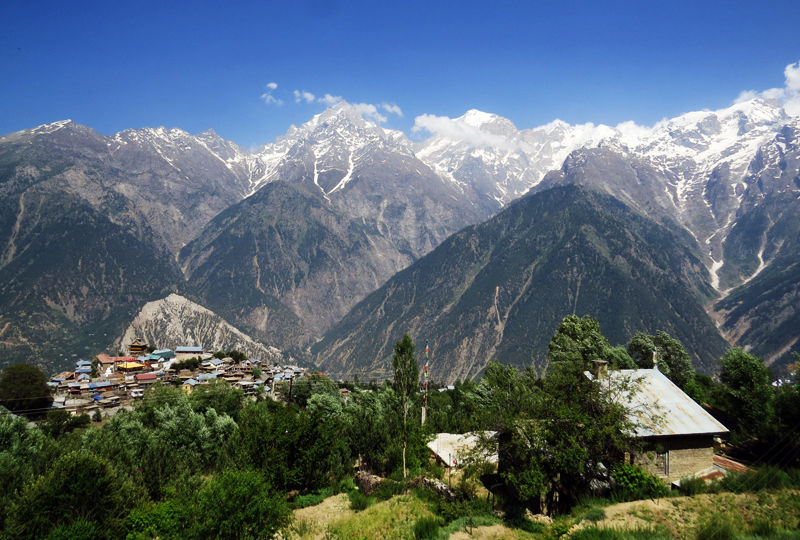 The procession of Lord Brahma Vishnu 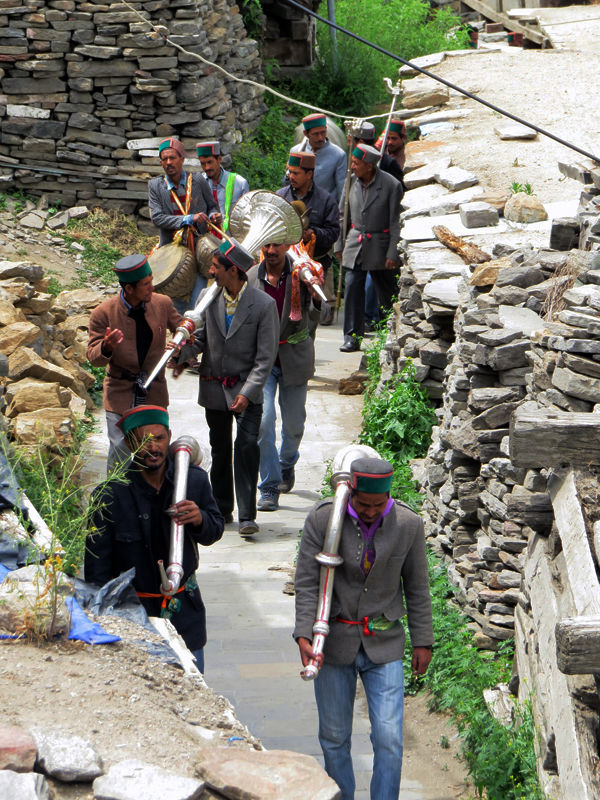 A Kinnauri woman at work 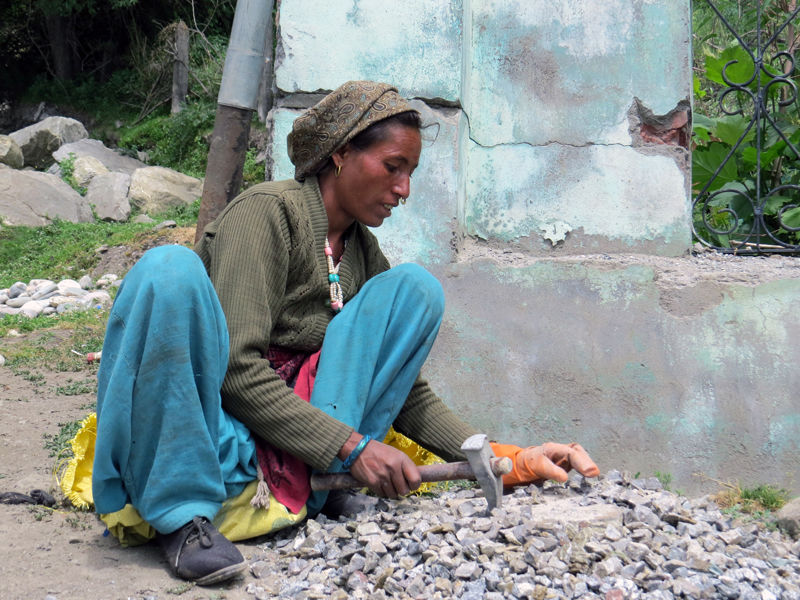 The road from Sarahan to Kalpa is one of the most beautiful Himalayan roads one can encounter. It passes through the most verdant of stretches as well as some of the loftiest of mountains with the mighty Sutlej roaring along in its deep valley below.

On some stretches, the road passes through ‘half-tunnels’, with the rocky overhangs sheltering the road from above. Sometimes it becomes a complete tunnel for a couple of metres.

The distance is not too long, but an invariable break happens at the 1000MW Karchham Wangtoo Hydro Electric Power Station on the Sutlej, 71km from Rampur. A permit has to be taken somewhere up the road and cars are released only at a one-way direction.

The Sutlej flows a few metres below the road surface here and there are a few shops where one can pick up packets of snacks. From Karchham, the road climbs further up the Sutlej valley and within about 10 minutes, the snow-capped peaks come into sight.

The road comes down to meet the Sutlej once again about an hour later in one of the harshest of stretches. But once you cross over to the other side, the landscape turns magically green and stretched across the horizon, in all its glory, the mighty Himalayan peaks of Kinner Kailash come into view. 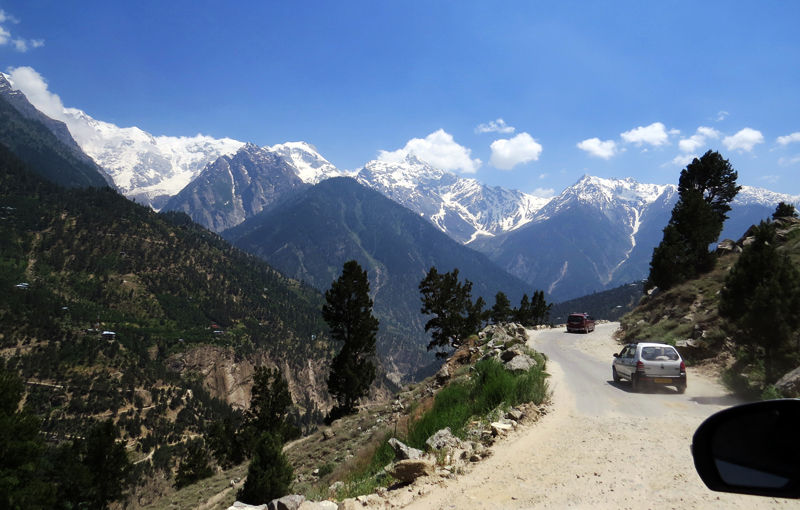 It still takes about half an hour to reach Kalpa, but the mountains will never let you out of sight and no Himalaya-lover can look away either, even for a second, from its heavenly beauty. Our hotel, Rakpa Regency, was right on top of Kalpa, offering a grand view of the Kinner Kailash, which the entire village offers anyway.

Kalpa, which used to be called Chini till the early 1960s, is a small hamlet that was important because of its location on the old Indo-Tibetan trade route. Those days are over and Kalpa makes a living out of apple orchards and tourism. Surrounded by ‘chilgoza’ pines—even the nuts of which are eaten by locals—Kalpa comes under Reckong Peo, the headquarters of Kinnaur, but is mostly famous for its second-to-none view of the 21,300-feet Kinner Kailash peaks.

Coming to myths, the tales of Banasur, which I narrated in my previous post on Sarahan, are famous here, too. Legend goes that Banasur, who was a devotee of Lord Shiva, summoned him through his prayers atop the Kinner Kailash peak. Shiva appeared in his Nataraj (dancer) form and Banraj appeased him by keeping up with his ‘tandava’ (dance of death) by playing a thousand musical instruments using as many hands.

The legend continues that Banraj installed a ‘shivling’ (representation of Shiva) atop the Kinner Kailash. The reason why at least two peaks in Himachal Pradesh are named after the sacred Kailash peak in Tibet is that they are all shaped like a triangle, which represents the ‘shivling’. Hence they are considered Shiva’s abode. One is Kinner Kailash and the other is Chamba Kailash or Manimahesh.

These peaks are sacred to Hindus and Buddhists alike. And just like the kora or the parikrama (circumambulation) of Mt Kailash, it’s done at Manimahesh and Kinner Kailash, too. The Kinner Kailash parikrama trek is said to be one of its kind.

I spent the entire afternoon gazing at the beautiful Kinner Kailash, which is reputed to change colours at different hours of the day. Unfortunately, I saw only one colour. Maybe the treat is for the faithful, not for faithless wretches like me who run to the mountains only to soak in their timeless beauty.

And beautiful it was. Dazzling under the sun this moment…hiding behind a veil of clouds the next…playing hide-and-seek through the mist…turning golden by the light of the setting sun… I gazed at the mountain till it got dark and I could see no more. Regardless of the post-trek exhaustion, I set the alarm and caught the sunrise the next day. We sat on the balcony and watched and watched, till it was time to leave. 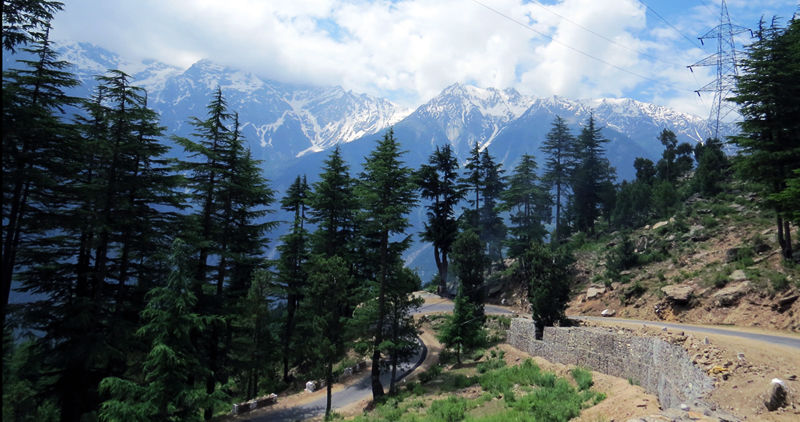 Before driving out of Kalpa, we went down to the old village of Chini. There’s a monastery there, which is reputed to be a century old. It is a modest structure but was closed. As we inspected the monastery unhurriedly, we heard something breaking the inherent calm of the place.

It was an ‘orchestra’ of sorts, combining horns, drums and cymbals. The monastery is located on a platform raised a couple metres above the road. On peeping out from the edge, we saw a procession of musicians following a man holding a decorated object reverently. It was obviously the procession of a deity.

I asked a couple of men at the monastery about the procession and they told me it was of “Lord Brahma Vishnu”. It was striking since Brahma and Vishnu are two different gods, two of the highest in the Hindu pantheon who make the Holy Trinity along with Shiva.

I felt the musical instruments used in the procession had striking similarities with those used by Tibetan Buddhists. But the two men denied it vehemently. “These instruments are all local. There’s no outside influence,” said one.

The procession snaked its way down the road and disappeared from sight. We came out of the monastery and walked a bit down the roads of the village. Somewhere down the road, we came across another small shrine with the emblem of a snake carved on the wall, above the door. The shrine was closed but Kalpa surely had some interesting things to offer.

Though we could not visit it, about 3km from Kalpa is Kothi, which has a temple dedicated to Goddess Chandika. Few venture there, but it’s certainly worth a visit if you have the time.

As our car left Kalpa, right at the edge of the village, we met the religious procession again. Some of the musicians looked at us as we drove past. Suddenly it all seemed like another country to me, so far removed from the chaos, commotion, madness and pollution of Kolkata.

The music of the devotees of Lord Brahma Vishnu kept ringing in my ears as the car wound its way out of Reckong Peo. And we kept watching the magnificent Kinner Kailash for as long as we could until it vanished from sight as the car sped towards our next destination, Chitkul, the last Indian village on the frontier with Tibet.