Kuari Pass : I got sponsored by Tripoto and IndiaHikes 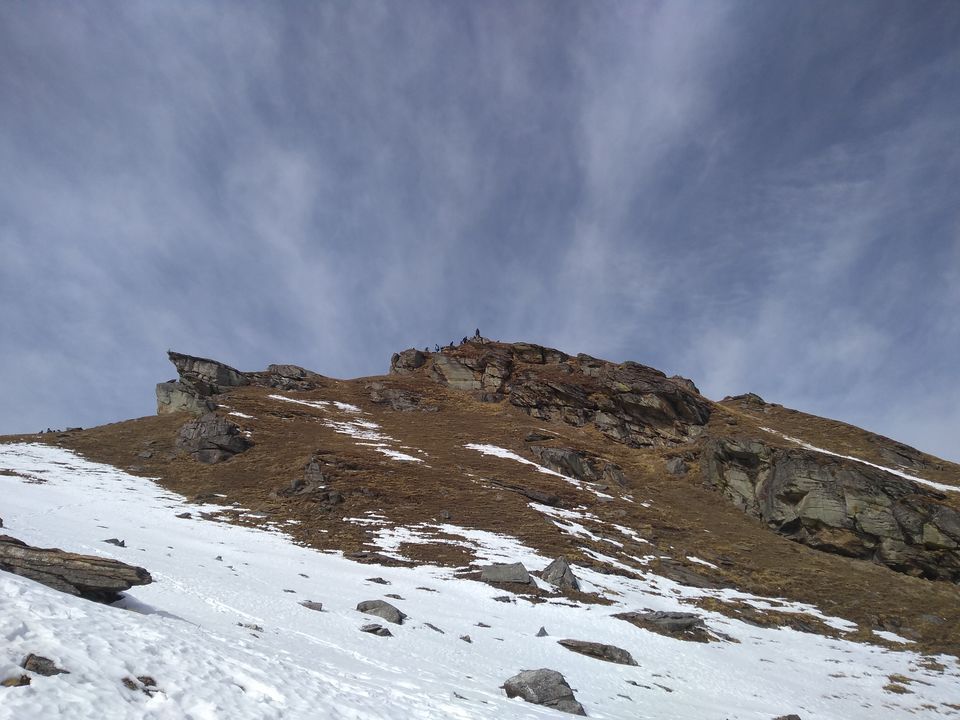 It takes a lot of effort to win a Tripoto contest; sleepless nights, a full month of spirited writing, keeping the competitive spirit in you, penning down things when the ideas of how to approach your blogs comes to your mind, mind blocks- hours of just staring at your screen and writing absolutely nothing down, hard work so to say. Even after all this you may not win, I re frame you would be lucky to win.

I was lucky enough when I won an all expenses paid trip to Kuari Pass for being the 2nd topper in the leader-board list for the most credits achieved in the month of June.

I had booked my trek almost five and a half months before I was going on the trek.(24-29 December) It was a long wait that I had to go through and excitement increased with each passing day.

It was not all smooth sailing to the trek day there were reports of cancellation of Har-ki-Dun trek for the season. It was followed by more bad news stating that the recent batch to Kuari Pass had their trek cancelled due to an unexpected snow storm. It was a roller coaster ride of emotions and the trek had not even started. Fingers crossed the weather cleared and the trek was a go-go for now.

I reached haridwar at 3:30 am in the night with the plans of spending the time at Har ki Pauri till my cab time of 6:30 am.

Before that though I had a promise to keep I had to capture pictures of the train tracks of Haridwar Railway Station. 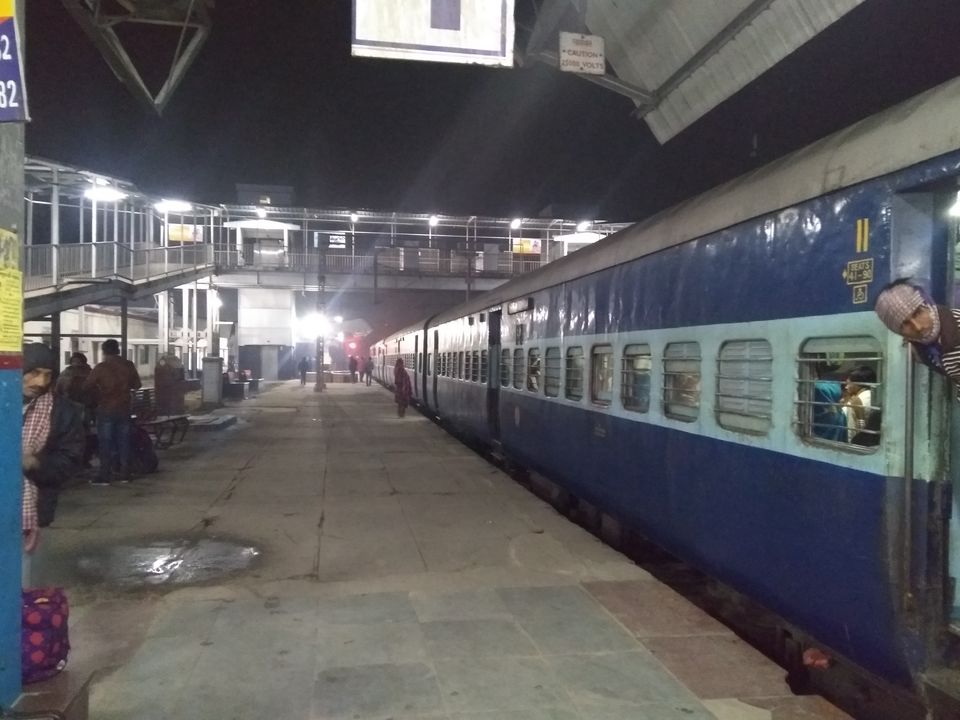 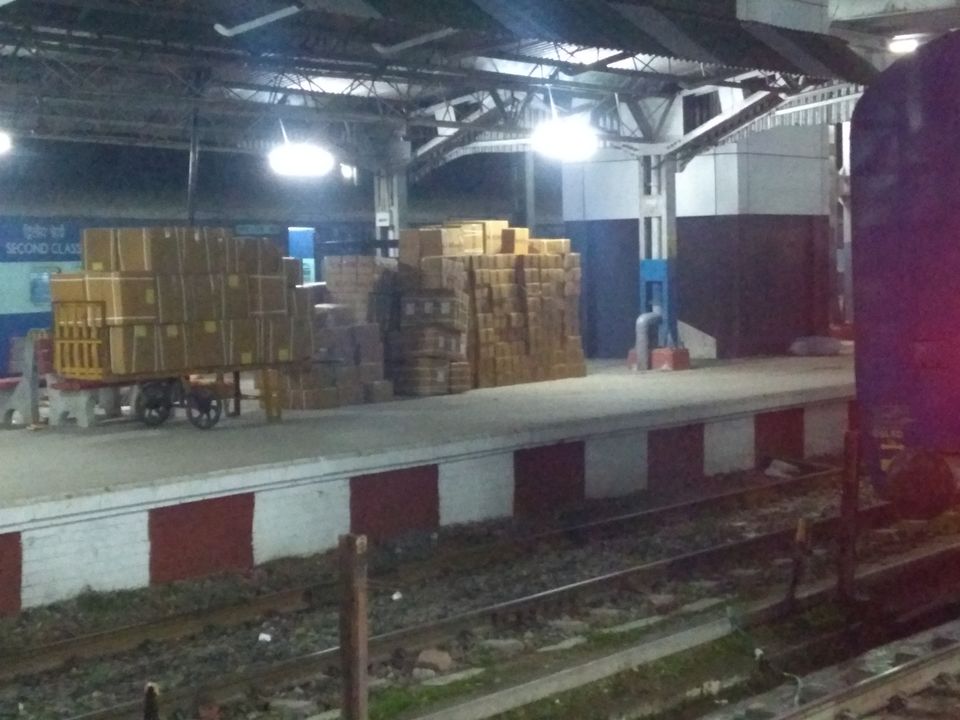 The streets were silent, there was a religious presence even in the police stations which had its own share of god's idols.

The thing with being a traveller with a backpack is that you are asked a lot of questions by the locals. "Where are you from?"- was the commonest of them all. My response for which had changed to "Dilli" from "Delhi".

There was a cover of fog in Har Ki Pauri, there were chilly winds. It was cold and we hadn't even reached the cold part yet. The religious spirit of the people was such though they dipped their bodies in that stone cold water of the eternal ganges leaving only the upper body dry, a few didn't even do that. 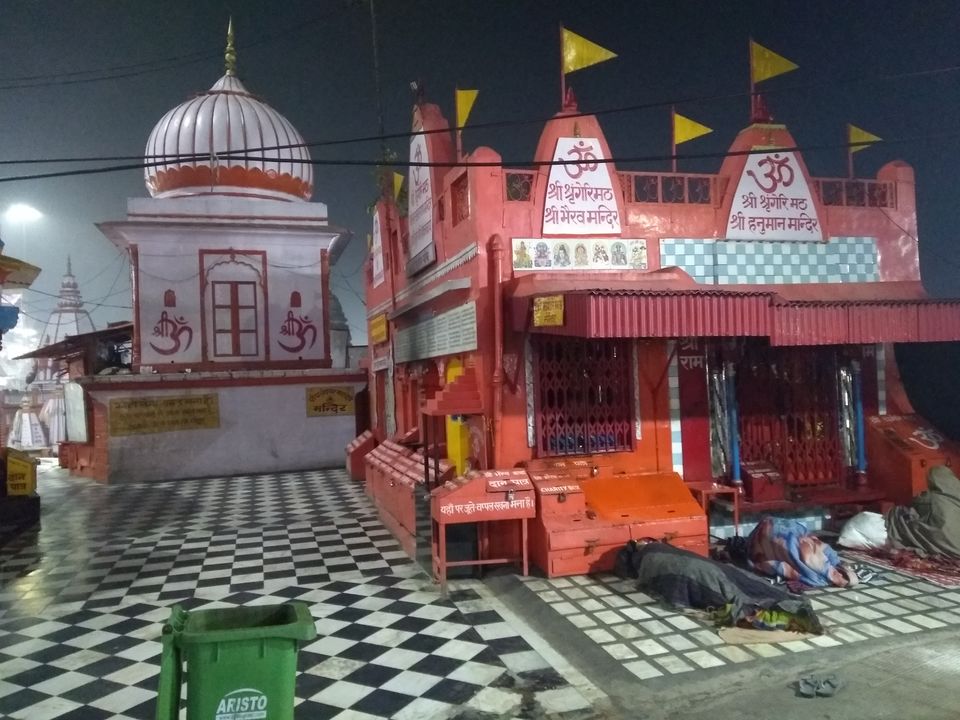 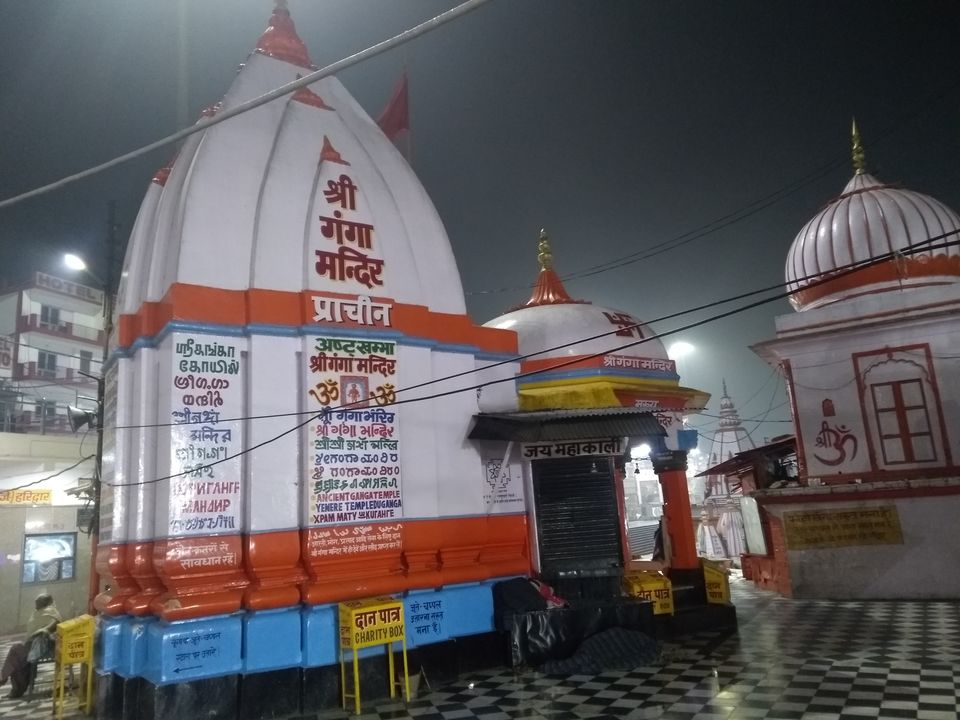 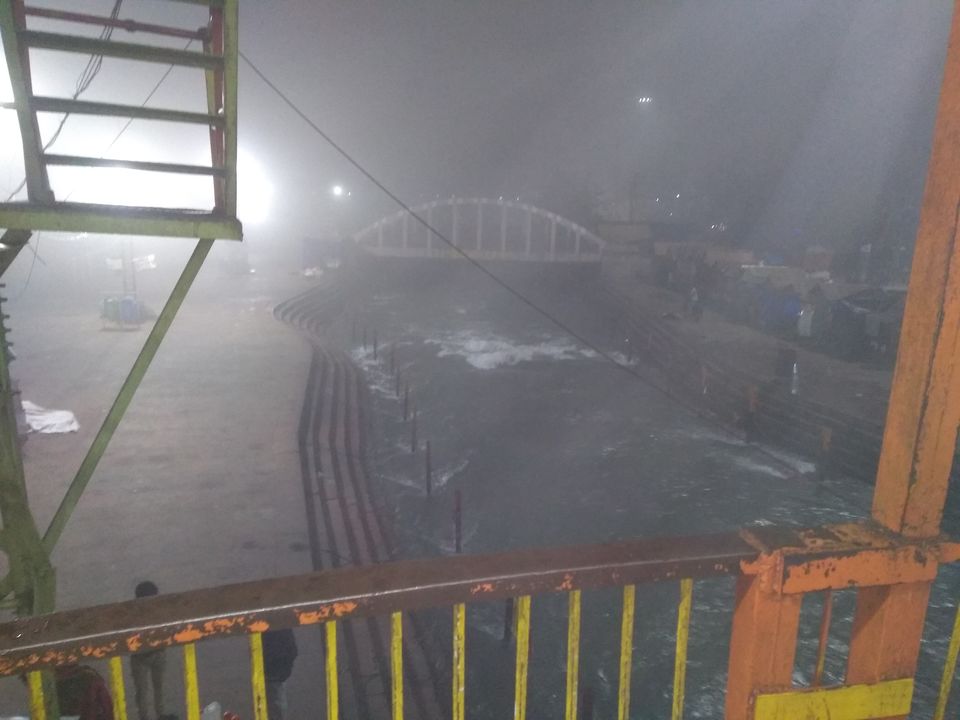 PS: The starting time of ganga arti is 6:30 am even if a website tells you otherwise don't pay attention.

I headed back to join my company of 22 for an 11 hour journey to Joshimath. The views along the way made it seem like a fairy tale that adults read; majestic snow-covered mountains with sunlight shining on the top of the peak, clouds appearing as rivers in clicks, two of the most holy rivers Alaknanda and Mandakini combining to become the eternal ganges at Rudra Prayag. 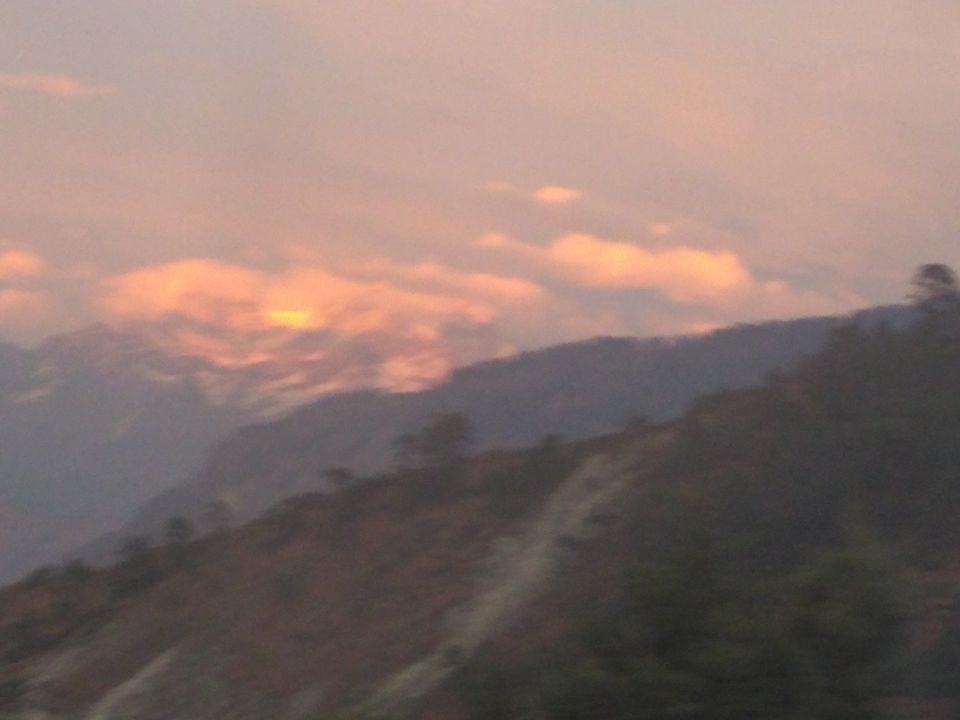 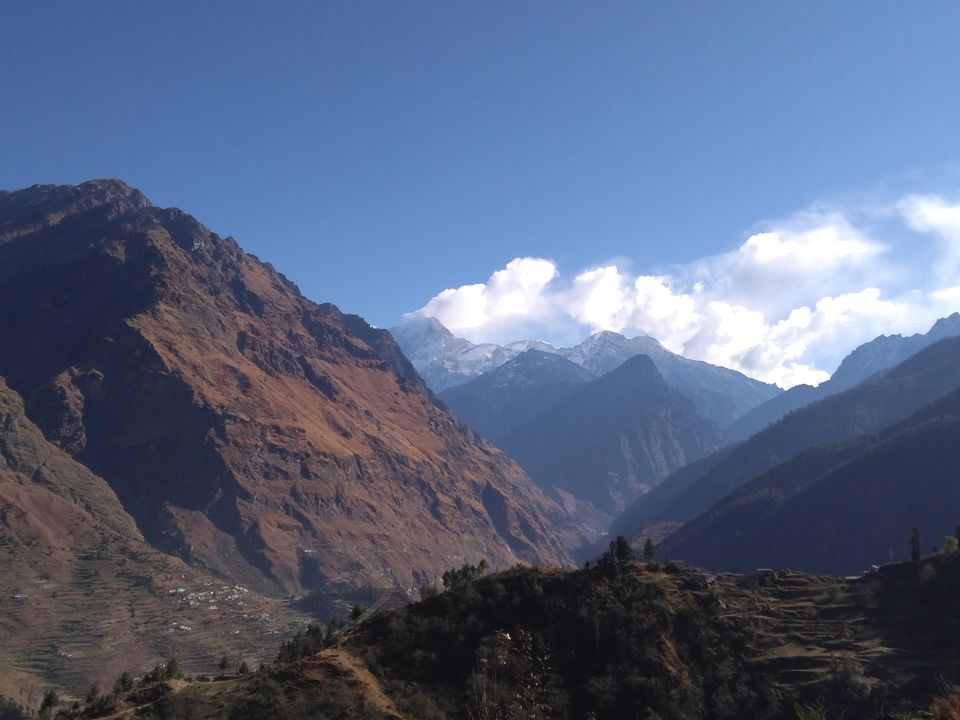 We were settled into our allotted rooms after reaching Joshimath. There were mouth watering snacks that awaited us to complement the welcome drinks. Oximeter readings and pulse checks followed. Dinner and sweets were served as if we were in a rush hour and that we were; “Sleep early, Wake up early”.

The next day we were woken up nice and early and we started of on the right time with excitement filled in each of us 22 souls.

Dhak was the starting point for the trek. Due to some unavoidable circumstances we were not able to take the usual itinerary.

Every experienced trekker would tell you that the hardest part is starting up. The experienced ones are able to handle themselves while the beginners have difficulties, they were helped out by the trek leaders. 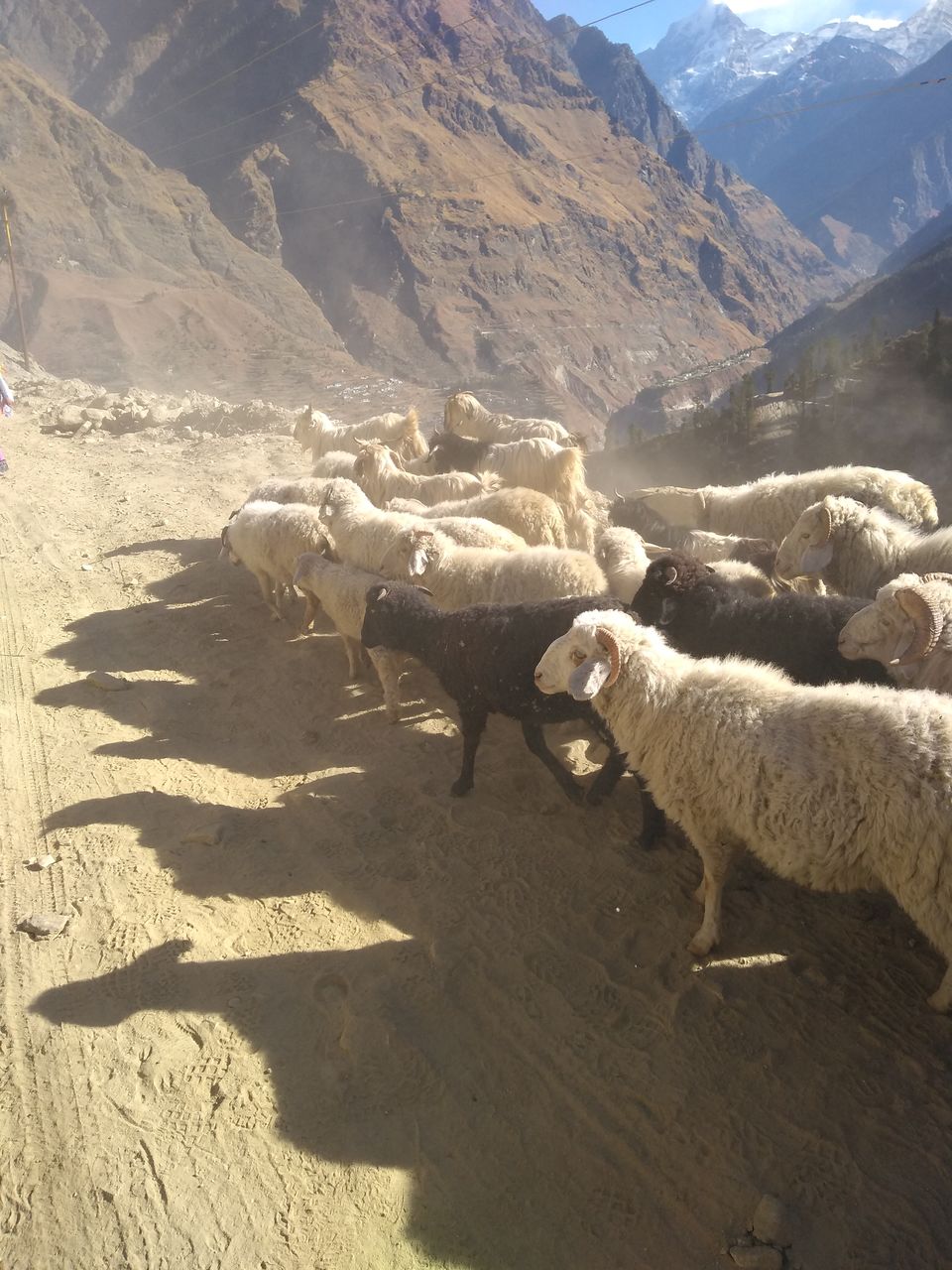 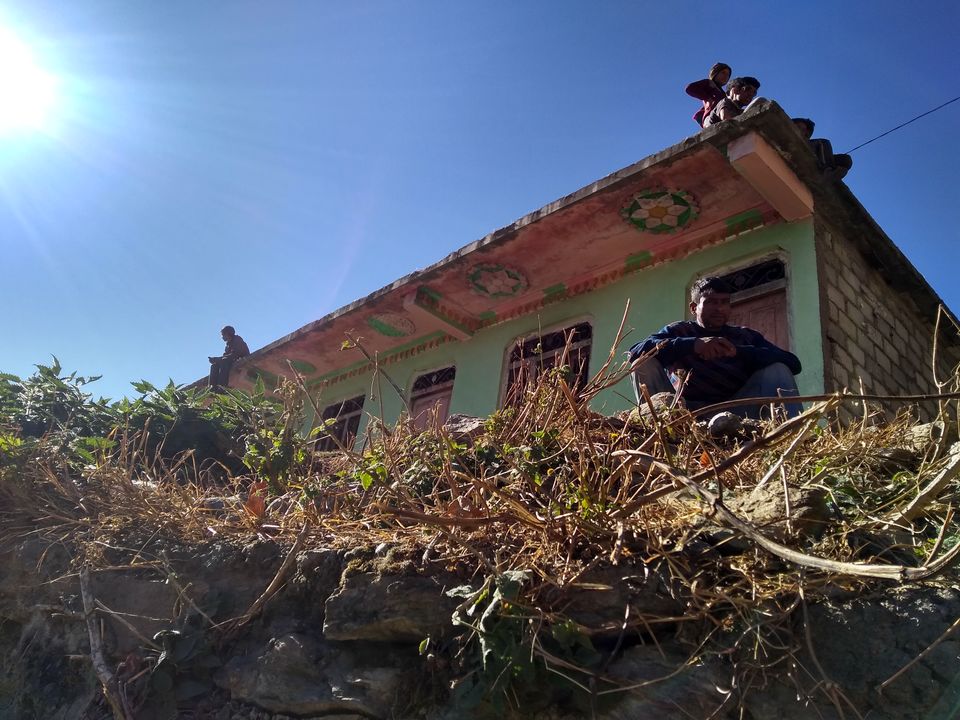 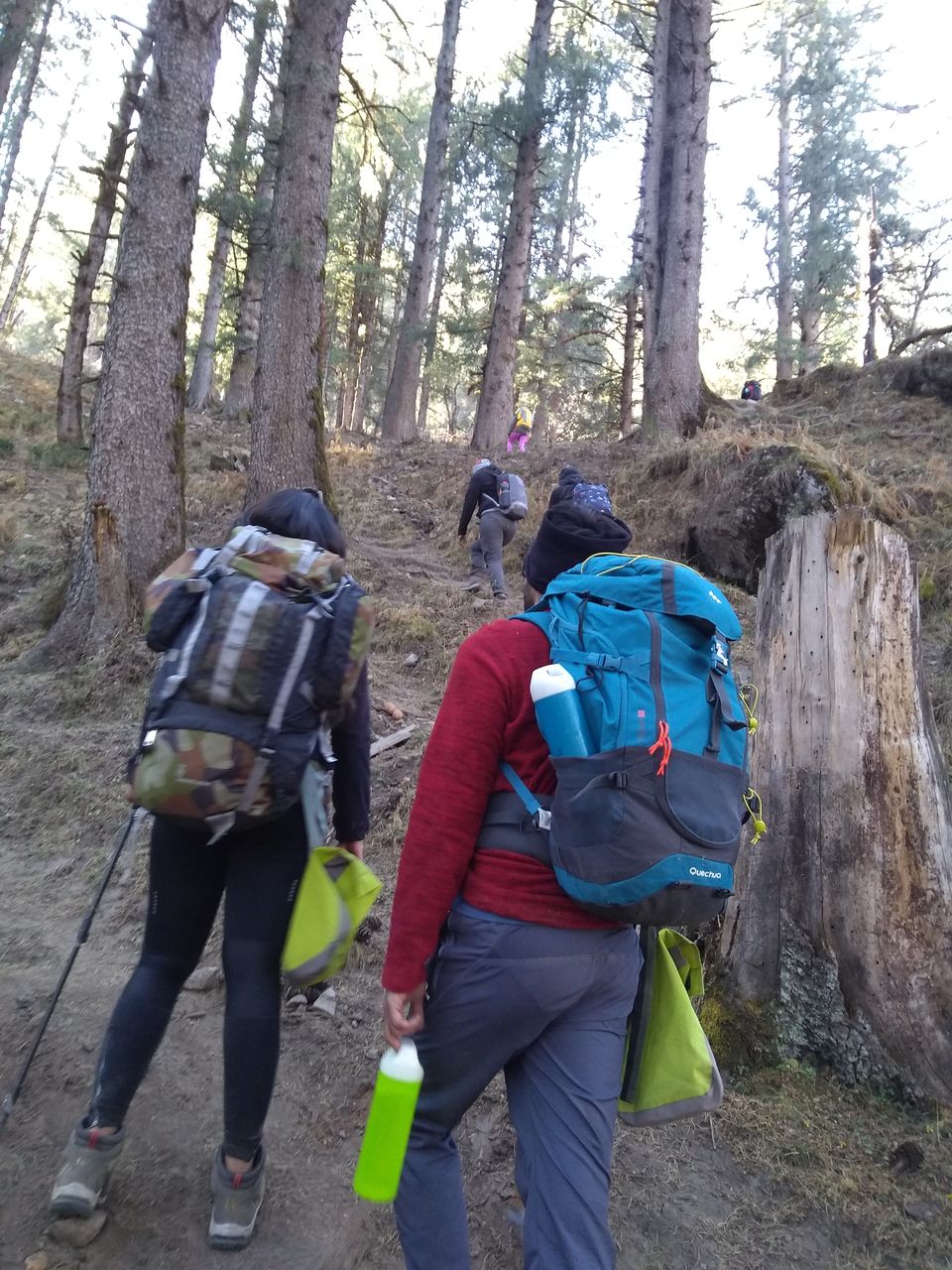 Beauty was surrounding us from everywhere with tall peaks from the starting, long strenuous walks had to be taken in order to reach the target destination. Some of the team struggled in stages but overall it was a very satisfying performance.

Our first base camp was akhrot geta, it took us four hours to reach the camp. I was very fortunate to find the only Akhrot in Akhrot Geta. Patches of snow could be seen on the base camp, with all white as our eyes were set on the next day's journey. 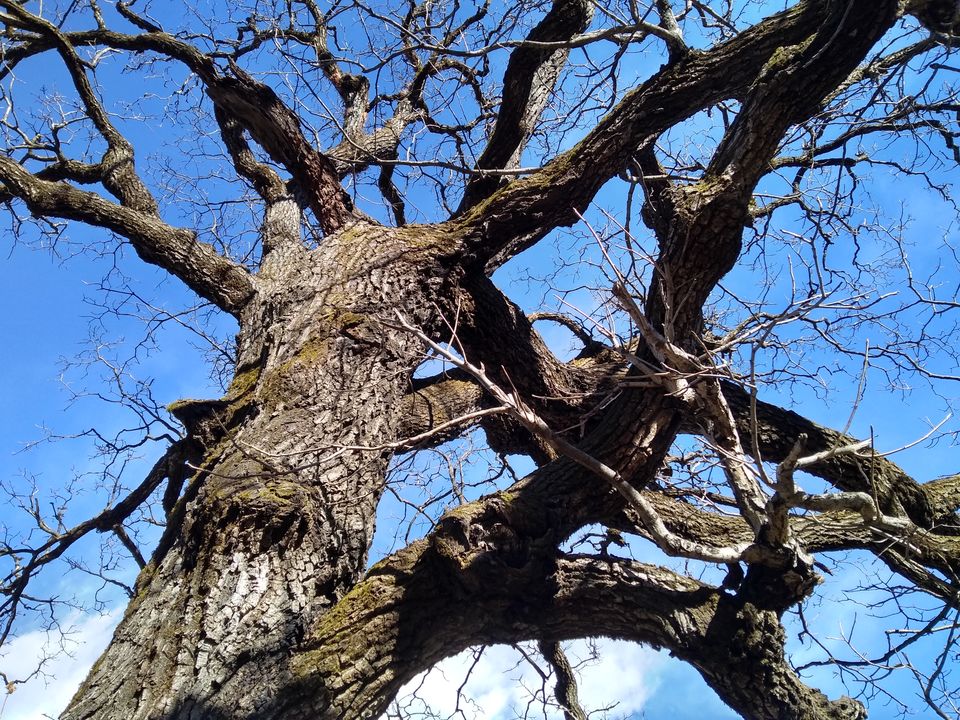 The views of all the ranges could amaze you in more ways than one, all the major mountains - Hathi-Godha, Kamat, Dronagiri could be seen as isolated peaks, serenity could be sensed. An entity not commonly seen on the treks.(isolated peaks)

The following hours were the real rush hours instructions flowing everywhere- learn how to pitch a tent, snack time, wear your warmers, tea time, dinner time and after all that we finally had time to ourselves. We spent the time playing tent games, the best part was almost the whole team joined in including the 60-odd year old man and the trek leader.

Our tired bodies went to sleep the next day.

An early start was the order of next day and we didn't have any packed lunches to go with us. A shorter trek was on our hands that meant. The trek was mainly on the familiar of the terrains, we trekked on patches of snow but only in short phases.

The difficulty level was a lot lesser than the previous day, consecutive days is not easy for a beginner and it took its toll on one. He had made some basic mistakes- he did not follow the instruction of taking small strides and overcooked; the other one he didn't take diamox which is a must for a first timer. This resulted in his oxygen level dipping, colour of his face had also foregone, life seemed to be gone from his body. He had to be put on oxygen for when he reached the campsite. He was put on oxygen and a constant check was kept. 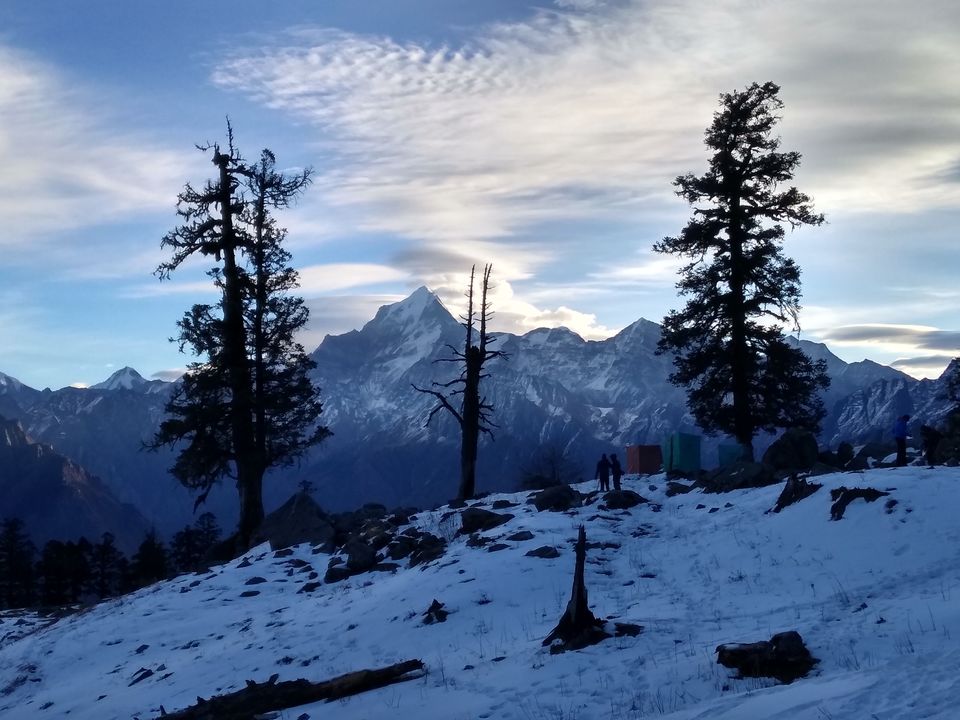 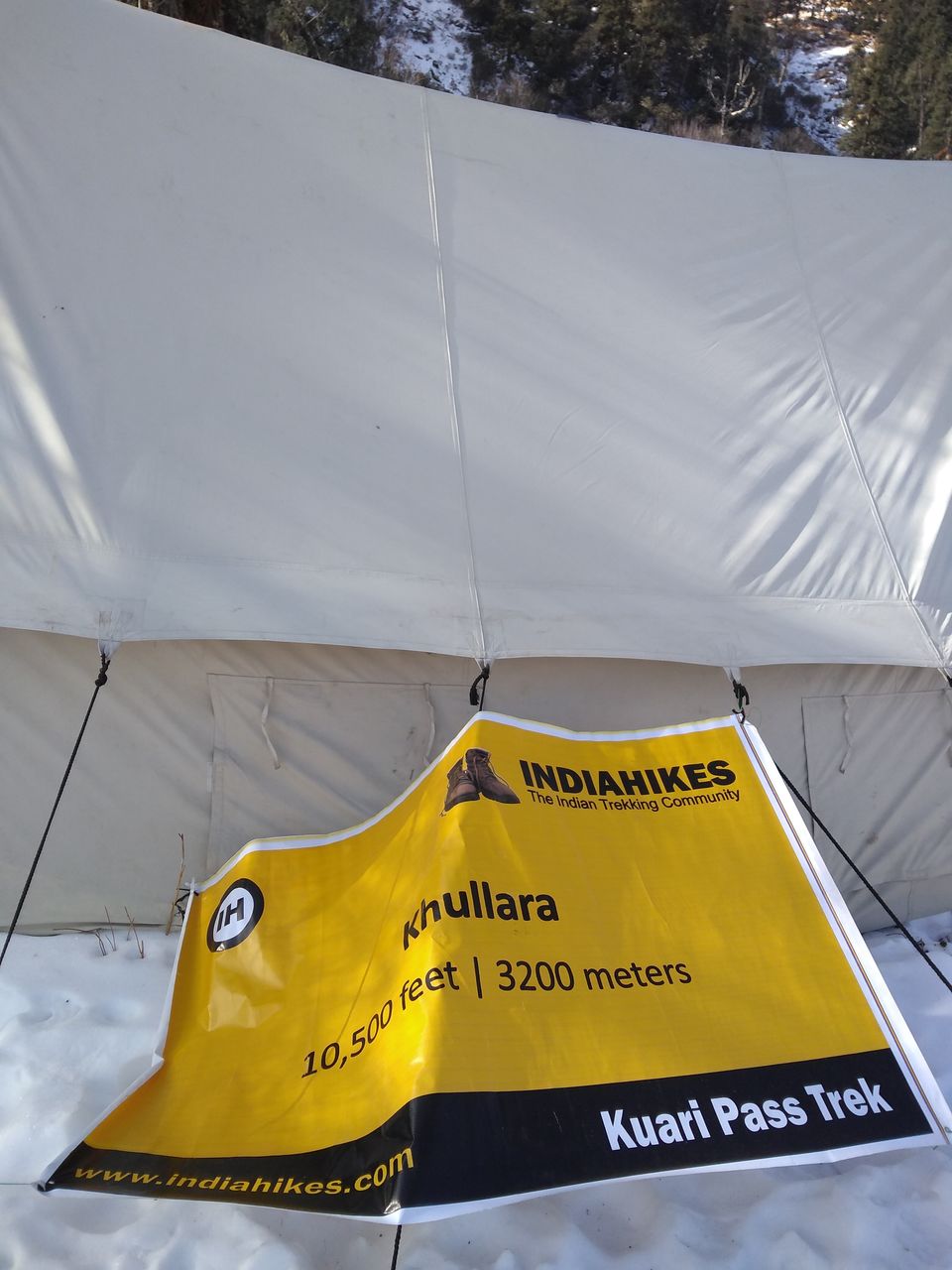 The rest of us took to the same routine that we had undertaken the day before. The highlight of the day was my visit with a group of nine to venture to a cliff, finding our own place and spending quality time to witness the wondrous multi-coloured tents in the white background complementing the tranquil Himalayas. 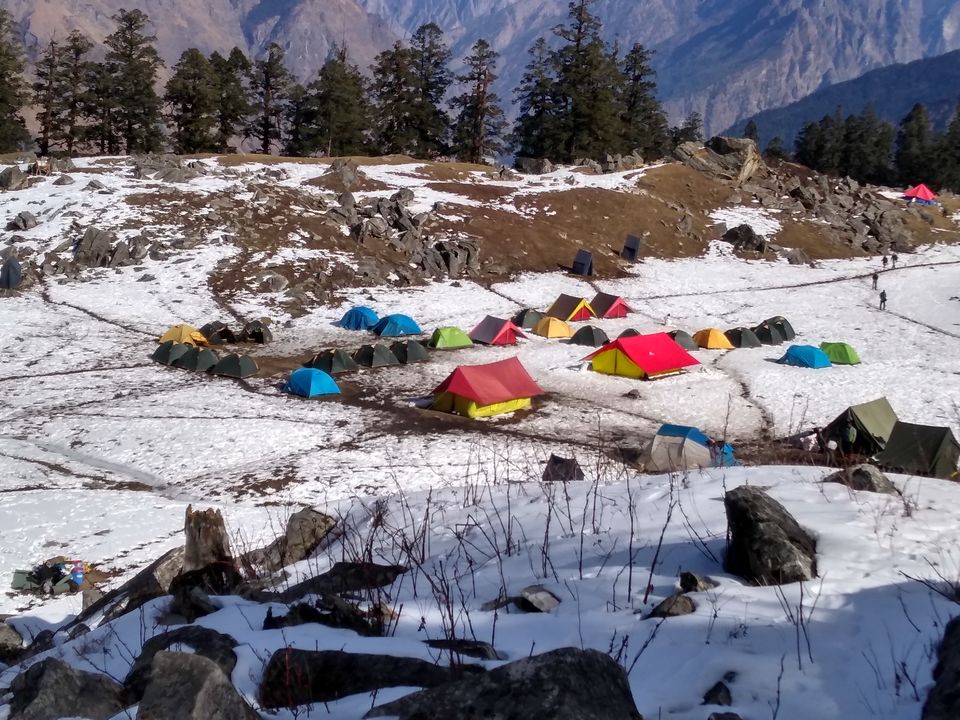 Nothing could be done for our good friend he had to be sent down with the other group. We stared off with a spring on our steps and micro spikes on our shoes for this was the day that we were going to make our way to Kuari Pass. There was rush hitting me as I made my way from the last of the pack to the front of the pack in no time.

Snow could be seen as far as eyes could go. We were going to leave behind the mountain range that had us so engrossed in the past few days. It had not disappeared though when there came a point that we had the best panoramic view of the range. The order of the day were the multiple group clicks, this one was the first of many. 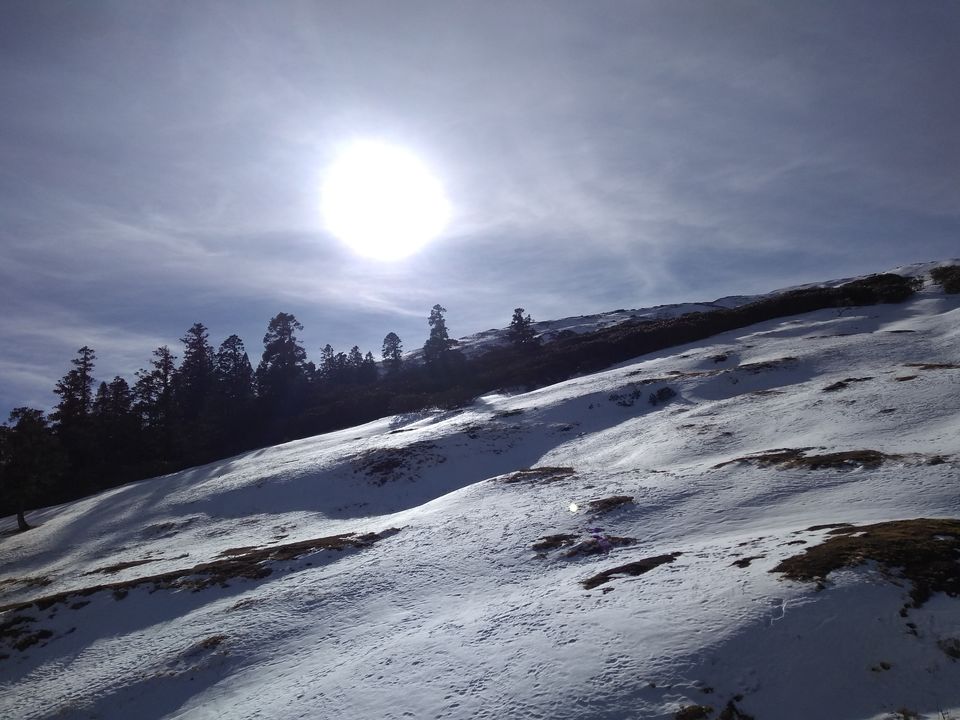 Kuari Pass had wearied us down but all that tension had gone now, our bodies felt relaxed. We were going to get enlightened it seemed.

Kuari Pass was a trail taken by Lord Corzun and it is named so because of it's untouched virginity in those times.

The relaxation of completing the trek reflected the next day, the day we were finally going to set our eyes on Nanda Devi, the highest peak with it's presence only in India.

Snow started to fall on us but not due to the mighty nature's vertical fall but from a horizontal range, snow fight !!! 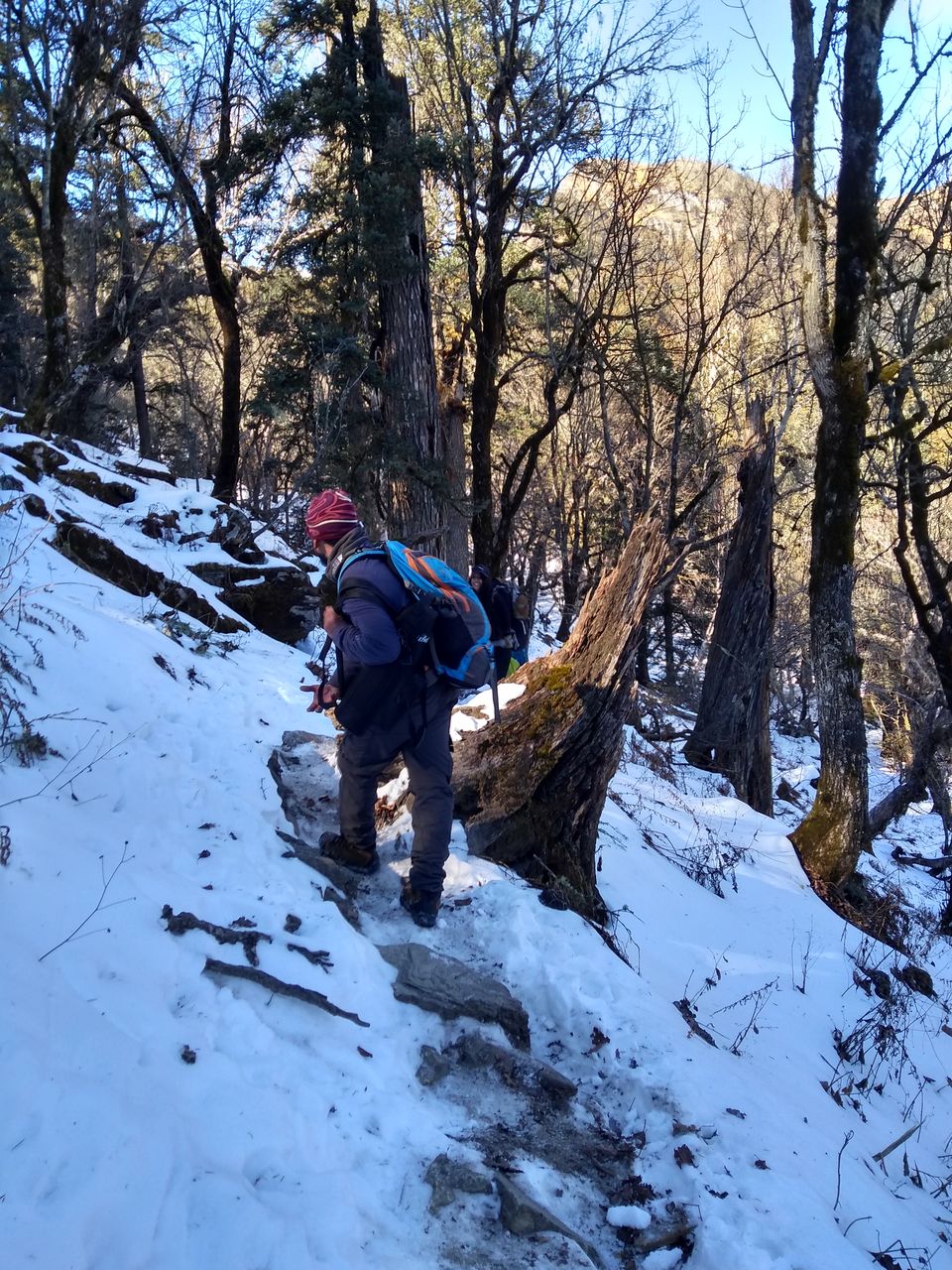 We were moving slower than usual but that was not due to the fun we were having, it was due to the five people that joined us from the other batch. They didn't feel like going to the top; their energy resources had exhausted and the stamina was not up to the mark.

We finally reached Tali Lake and there she was standing in her magnificence- Nanda Devi. Nanda Devi was all covered in mist when we arrived, gushing winds cleared it for just that worthy singular instant. In that moment all your life could be seen written, how the clarity of goals are imperative to success. 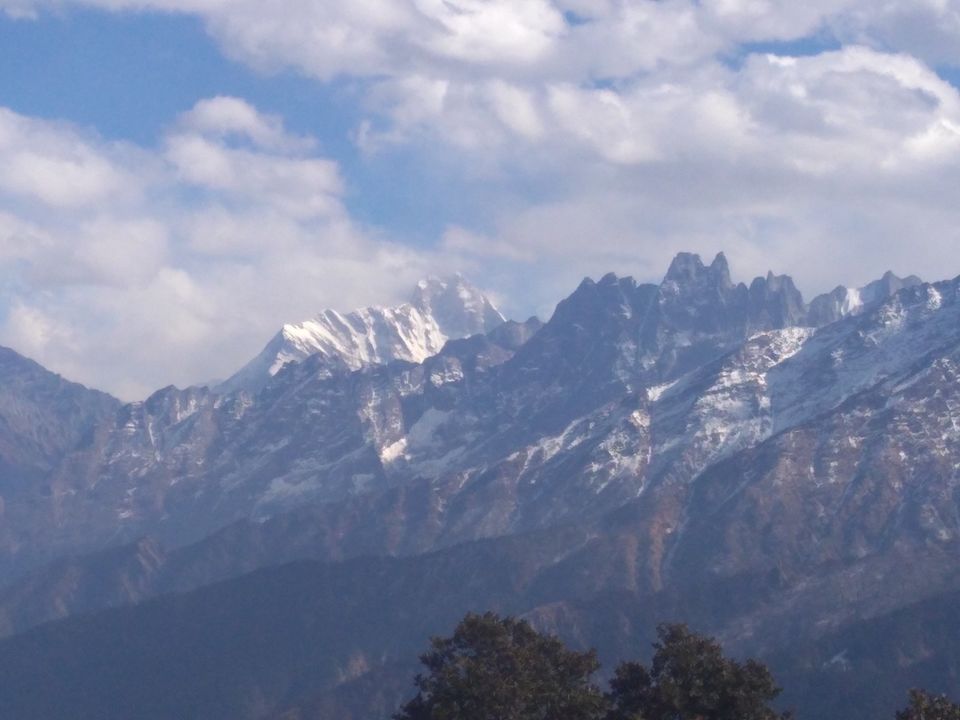 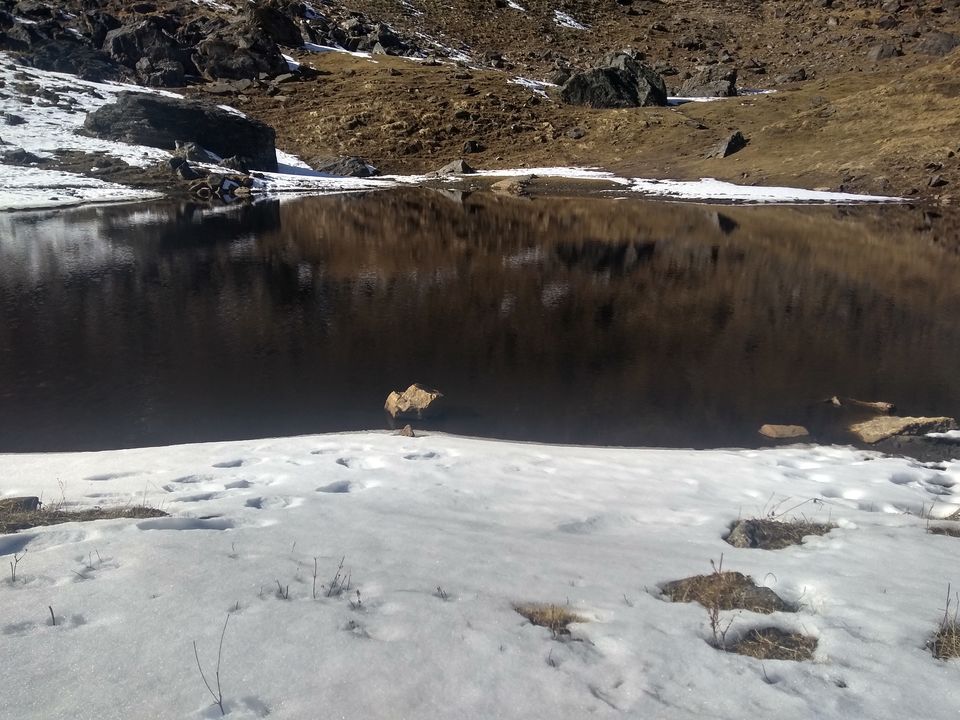 The route was down-slope but it was not all down-slope for me. I had to bring another person from the other batch home. It took a significant toll on me. Eventually we got down but that was not before nightfall.

So the day that started of with all the fun finished on a gruesomely challenging note. The return route to Delhi was set the next morning.

I had a wondrous time and I would like to specially thank Indiahikes and Tripoto for it.