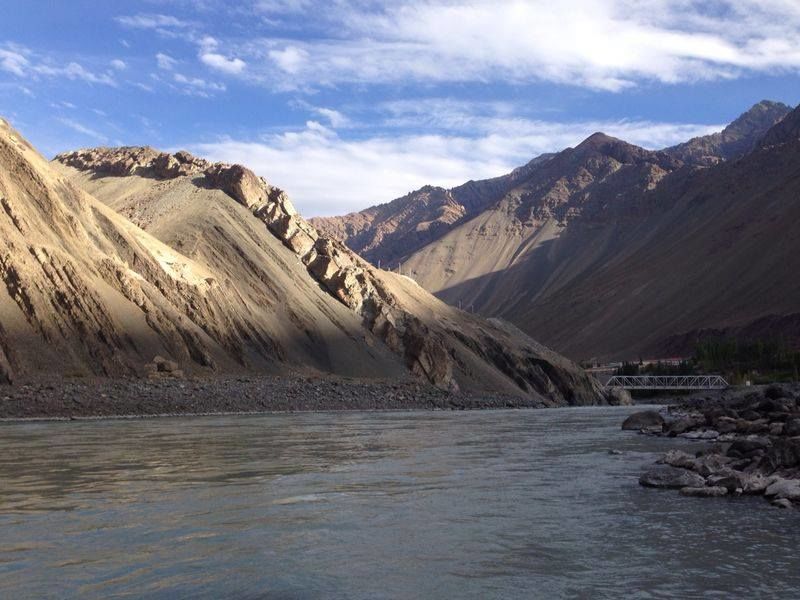 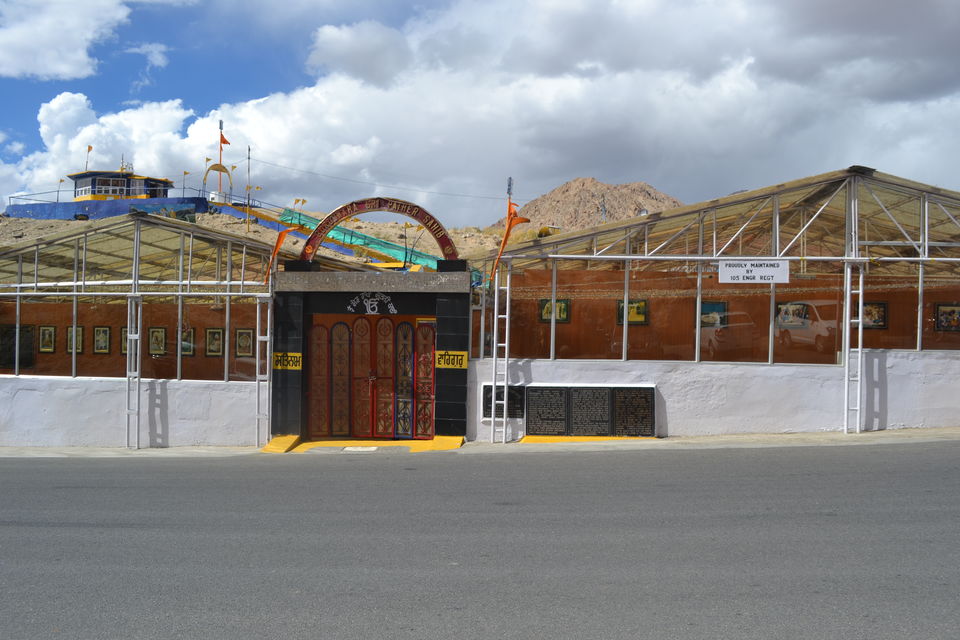 The sight of double humped camel at Nubra Valley 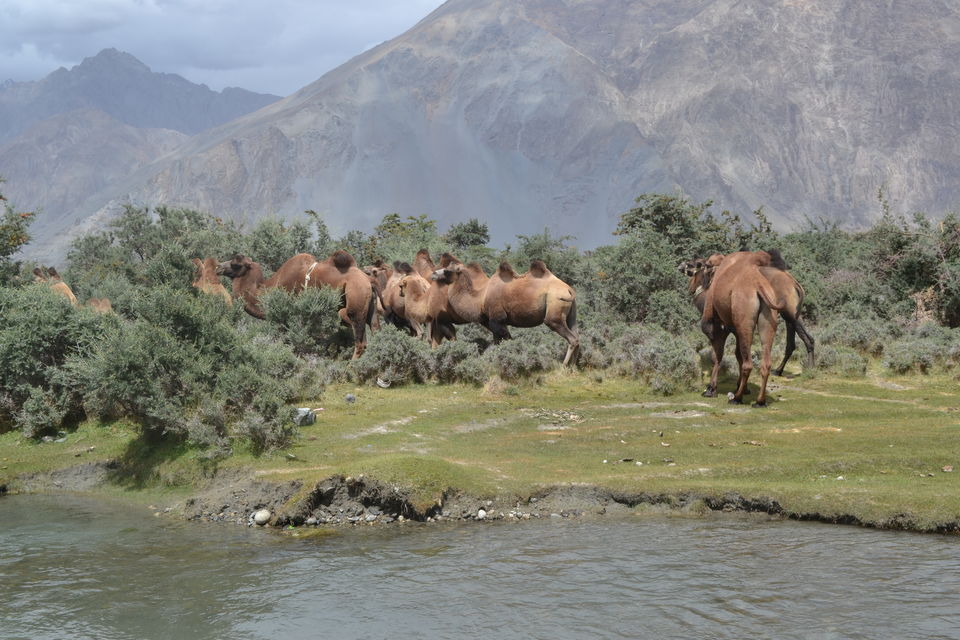 It was the moving home for us 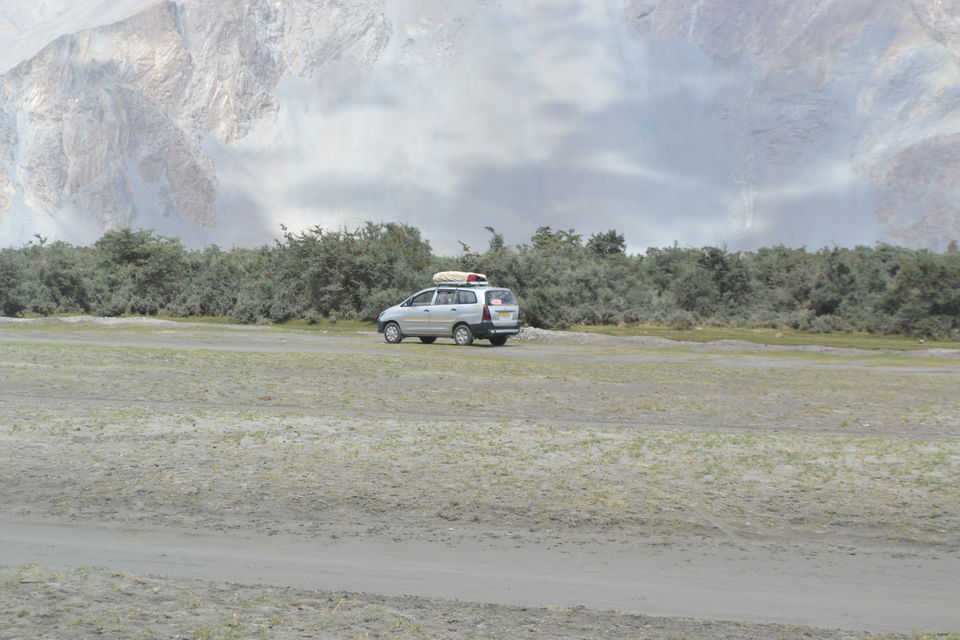 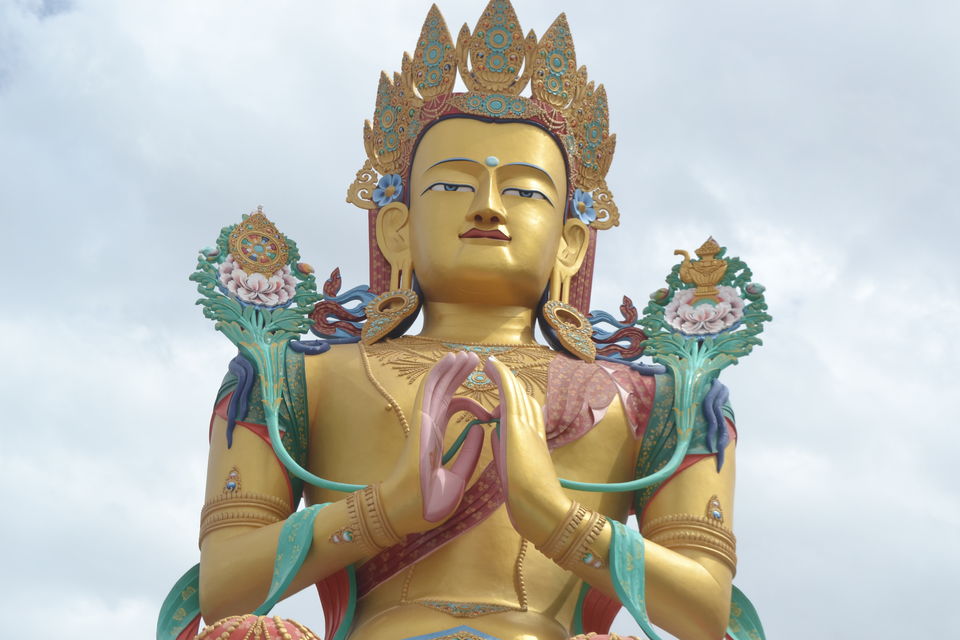 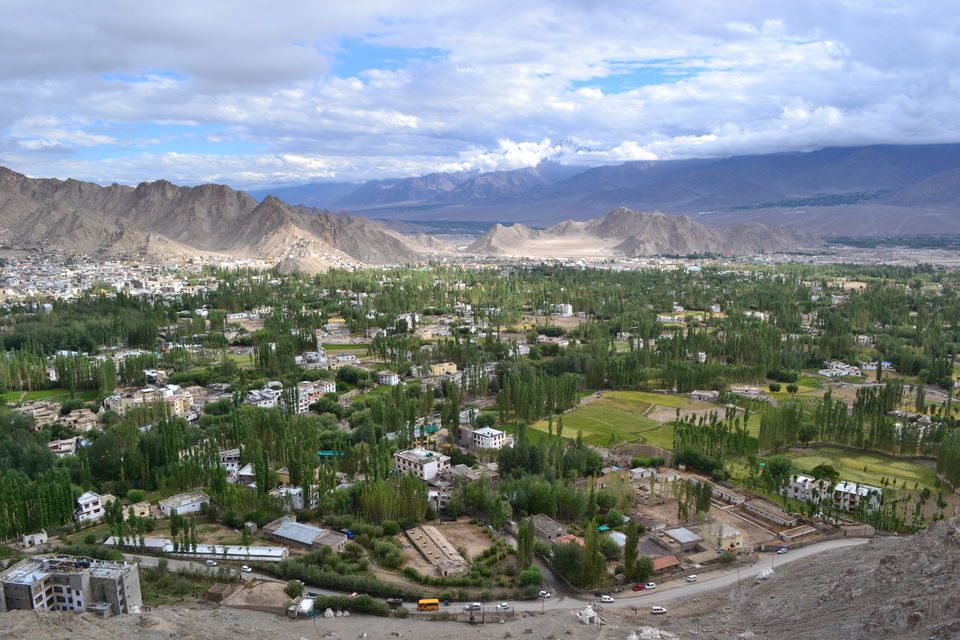 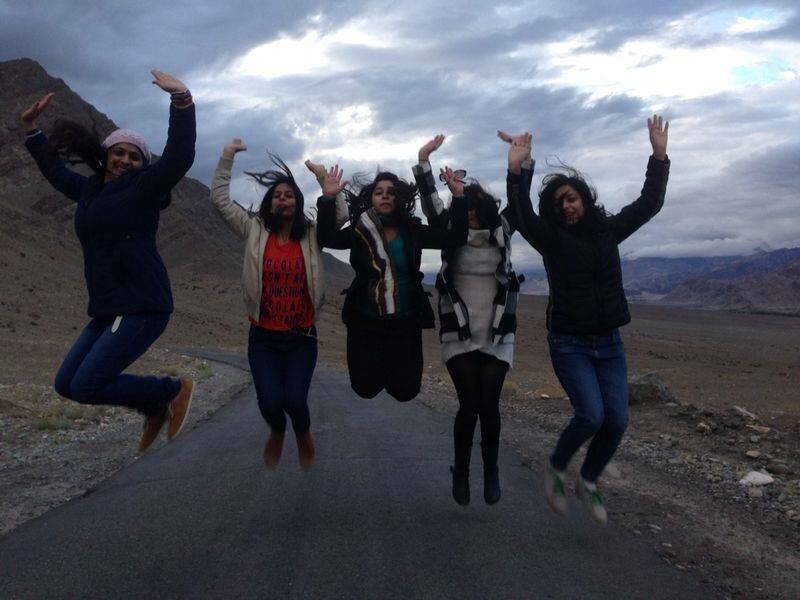 Local's chalet! our shelter for one night. 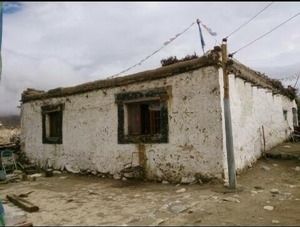 Sitting at height making a perfect sight! at Nubra 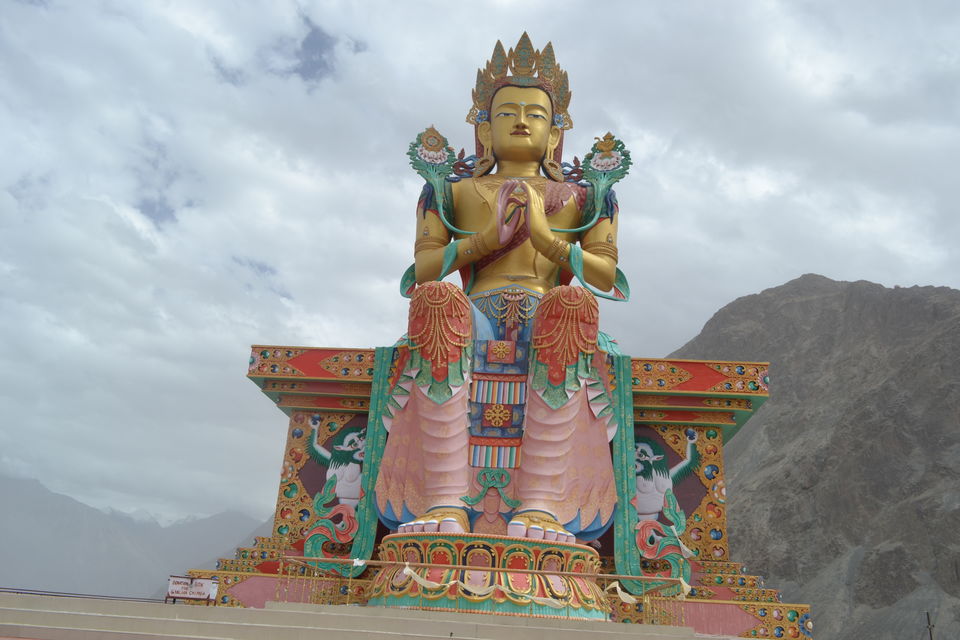 It was like the normal house party on the weekend when one of us jumped at the idea of doing a Leh trip. We quickly calculated the cost and started searching for the flights. Since we were five girls and none of us knows riding bikes so flight was the only option left. Nevertheless, it was one hell of a trip. Yes! A biking trip is still in the bucket. We packed our bags light with a handy first aid kit by keeping AMS (Acute mountain sickness) and weather in our heads. We hired a taxi (Innova) with Ladakhi driver and probably the best thing happened to us. He was the guide, the photographer, negotiator at hotels, and savior at times (we got stuck in a landslide and he managed to provide us a shelter) - all in one.

We landed Leh to the spectacular view of wobbly mountains and a clear sky. All being girls, we could not hide our excitement, blaring and taking selfies. Security personnel had to come to stop us as taking pictures at the runway is not allowed. After checking in to the hotel Chube (booked via MakeMyTrip), the entire day was kept low to acclimatize, resting and roaming locally. Evening spent by checking out some of the good restaurants on the old fort road of the city and Gesmo became our favorite place to binge. Don’t forget to try Thupka and the local delicacies like the one made of Yak milk.

At the very first day of excursions, we were spellbound to see the surreal beauty around. Needless to say, it’s the photographer’s paradise. Enroute Alchi, there were two stops for us; Magnetic Hills and Pathar Sahib Gurudwara. Magnetic hill is truly magnetic and you get to see a perfect view of infinite clean roads.

The Gurudwara is situated on the Leh-Srinagar highway. It was created in the memory of first guru, Guru Nanak Dev ji. The only place which was crowded but quiet.

Alchi Village has a famous Monastery and is 70 km. from Leh, situated on the banks of Indus River. The Monastery is calm and surrounded by so many shops for antique pieces. On the way back, the confluence was the stop for us where the two rivers Zanskar and Indus meet creating a breathtaking view.

They say, “It’s all about the journey, not the destination”. It’s true when you are with your friends, packed in a cozy SUV, the travel songs on and the majestic view around, who wants to reach early?

We witnessed the highest motorable road in the world, at an elevation of 18,379 ft., the Khardungla pass which was a spot in itself surrounded by the snow clad mountains plus clear blue sky. It was a hell of a beauty.

With the striking view of changing landscapes every hour, we reached the Diskit monastery; the oldest and largest monastery of Nubra Valley. It has the highest statue of lord Budha. The view from the roof is thrilling. We drove further to Hunder to experience the sand dunes with the double humped bacteria camels around. It was my favorite spot; you can be just lost in the serene view of sandy, Rocky Mountains. Overnight stay was in Nubra Ethnic Camp in Hunder. It is a must recommended as they serve you the best food buffet ever. Next day while returning, landslide gave us the adventurous night. It was snow all around, dark and drizzling; everybody was rushing to the nearest village in a hope of getting shelter for that night. Our driver somehow managed to get one for us and we spent that exciting night at a local’s chalet. They served us the Maggie and were quite a good host to us. The roads were cleared the very next morning. We took a sigh and headed to Leh.

The real roads to heaven truly down from the fairy tale is here going towards the Pangong Tso lake, which is situated at a height of about 13, 900 ft. You get craving to capture each and every spot on the way. After taking a halt at Changla pass, the third highest motorable mountain pass in the world, we reached Pangong in just 4 hrs. All credits to our champion driver. It was a delight to the eyes. The lake is clean, peaceful and divine charm. We sat for a while soaking up the beautiful view of lofty mountains, aqua blue lake and taking pictures all around. Had lunch from one of the food joints there and drove back to Leh.

Last day, we relaxed and did the local sightseeing, covering Shanti Stupa and Hemis.

Shanti Stupa is situated on a hilltop, from where you can get the glimpse of the whole city. Here you can relax and take a sneak peek at the Buddhism culture.

Unlike other monasteries, Hemis is not very far from the main village. It is 45 Km from Leh. Again the sparkling roads, prayer flags on the way which is a common sight throughout Ladakh steal the heart. There I convinced few little cute monks for some clicks. Argh! It was a difficult task though. Yes difficult since they were just running here and there out of shyness.

Evening, we spent walking down the market streets, checking out restaurants, local shops and interacting with the locals. We left Leh with a promise to come back to experience more and taking lovely memories along.

HotelsMap
“Traveling. It leaves you speechless then turns you into a storyteller” – Ibn Battuta The quote is truly pertinent when it comes to the Ladakh Valley. Ladakh is different. It’s different from the routine tourist places, has no hustle bustle, raw nature, and less crowded. As if god himself has pulled down his own canvas for us to walk on. It takes you to nature's lap and make you witness the picturesque landscapes and, of course, the sugary Ladakhi Locals. A lot has already been written and said about the traveler’s paradise on earth. Everyone has their own story to tell and I am no less.
SPONSORED
Want to book a similar trip?
I accept the Terms of Use and Privacy Policy of Tripoto.
SPONSORED
Tagged:
##Leh##Ladakh##hunder##diskit##gesmo##double humped camel##pangong##nubra##hemis##Itinerary##Ladakh Itinerary##nubra ethnic camp##leh itinerary by air#Road Trip#nature#Culture & Arts#adventure