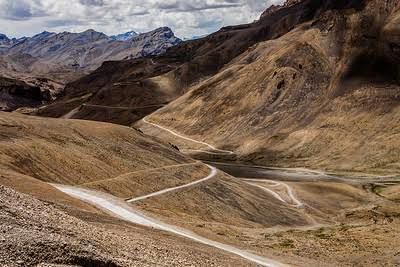 The Leh-Manali Highway is a high mountain road situated in India. It spans over a length of 479 km (298 mi) among the Himalaya mountain range. It passes through some of the world’s highest mountain passes in the world, with a mean altitude in between 2 to 3 miles above sea level. Uncertain weather, high altitude, extreme cold and no civilization for miles make this a very treacherous track. Carry extra fuel and feel close to heaven.

This road connects Leh in Ladakh in Jammu and Kashmir state and Manali in Himachal Pradesh state. It crosses some of world’s highest passes including averaging well over 17,000 feet. The journey from Manali to Leh takes about one full day by jeep or two days by bus. It’s accessible for cars and trucks during several months in summer only and its highest elevation is 5,328 m (17,480 ft) at Taglang La mountain pass. Because of the important position of Ladakh between China and Pakistan this Highway plays an important strategic role for India, which results in the maintenance of the road by the Indian army itself. In addition to the spectacular landscape the life on and next to the road is diversified because of a wide variety of people frequenting it. Construction workers from other parts of India are working for better road conditions during the summer.

This road is usually is open for only about four and a half months in a year in summer between May or June, when the snow is cleared by the Border Roads Organisation of Indian army, and mid-October when snowfall again blocks it. Avalanches and heavy snowfalls can sometimes block some sections of the road and can be extremely dangerous due to frequent patches of ice. Conditions can change quickly and be harsh. Road closures can be frequent, so check conditions before traveling to this area. Tourists from all over the world, as well as a growing number of Indian tourists use this road for the scenic impressions of the mountains. Truck drivers transport their cargo to Leh and back to other parts of India.

It is part of the National Highway 3. The trip on this road includes a lot of dangers. The road itself, with trucks and buses that sometimes travel only at 15 to 20 km/h due to the road condition. This is not the most comfortable drive in the world. This is not helped by the fact that some of the roads have drops to the side of a good few hundred metres. You can observe crashed and unlucky vehicles cover with rust down the slope somewhere... And some of the passes are really spectacular, especially if you have to wait on the side of the road for a truck to pass... The road is one of the most complicated and challenging roads in the world, with snow, never ending traffic jams, landslides and terrain making the journey exceedingly difficult.

Due its climb in elevation over thousands of feet, and pass through remote areas, it is important when driving in these conditions to be prepared. Owing to the rarefied atmosphere (low air pressure) at high altitude, less oxygen is breathed in and many travellers experience altitude sickness or acute mountain sickness, causing acute mountain sickness: headache, nausea, dizziness and vomiting. Ladakh is a cold semi-arid desert. It is cold along the highway even in summer (June onwards); the days are warm in bright sunshine but the nights are very cold. Check weather forecasts before leaving home, and remember that it becomes cooler and often more prone to storms at higher elevations.

The road has been improved the last years. Currently it’s mostly asphalted. It’s incredible what kind of vehicles are using the road - from tankers and goods lorrys, army trucks to whatever else comes along with a motor in it, or without the motor, as some cyclist do. The road, built and maintained by the Indian Army, plays an important role in the movement of armed forces in Ladakh. It's cleared by the Border Roads Organisation (BRO).

Proper preparation is essential to having a safe, enjoyable trop on this road. Due to the remoteness of the area, take special care to ensure that your vehicle is ready for the trip: inspect all tires and make sure they are properly inflated, check all vehicle fluids, replace worn hoses and belts, empty your RV's holding tank and fill the water tank, purchase groceries and supplies. For the vehicle, bring at least two full-sized spare tires mounted on rims, tire jack and tools for flat tires, emergency flares, extra gasoline, motor oil, and wiper fluid and a radio. It is also advisable to carry chocolates, glucose or other high energy food on the journey and spend only a little time at the high mountain passes.