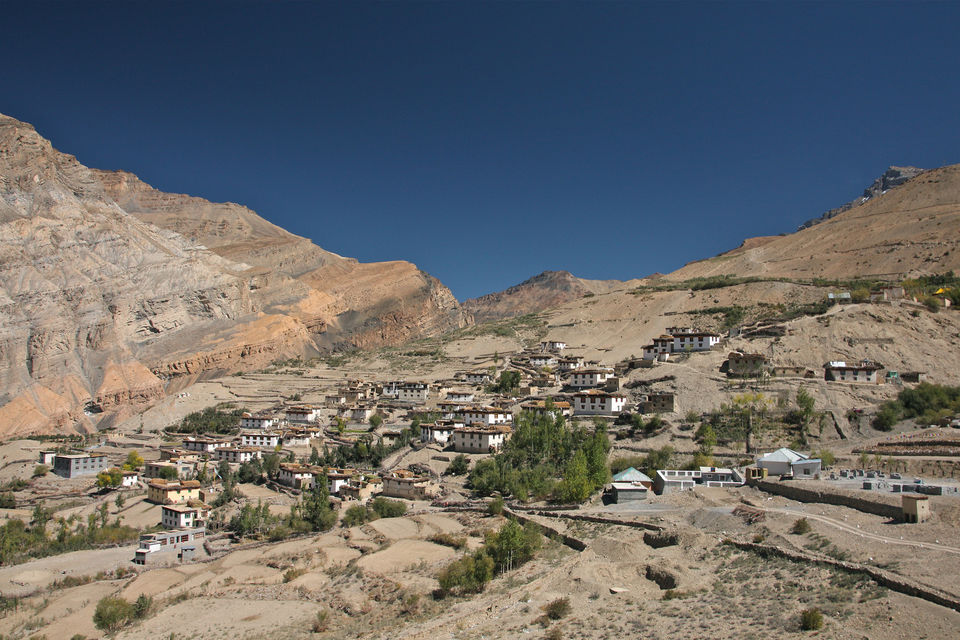 Spiti Valley!! Known for its “beyond amazing” landscapes, rough terrains and a tough accessibility, it is one of the most loved places for travelers who like less-commercial and partially explored destinations! Spiti is not just a District or destination to explore; it is an emotion which can truly be felt by a lucky few! It casts a spell on you and once you have been here… You will forever have a part of you wandering here!!

I assume that those who are planning a Spiti trip or been there are total lovers of solitude and like to unravel mysteries and be mesmerized! If you are seeking comfort and looking for grandeur, this article isn’t for you!

One such mystery lies in the lap of Lingti Valley (Between Tabo-Kaza) known as Lhalung!

Lhalung Monastery also known as “Golden Temple”, is supposedly the oldest monastery in the Spiti region, in fact one of the oldest in the entire religion… It is believed that the monastery had suddenly evolved all by itself after a willow tree was planted in the 10th century CE! The same willow tree (supposedly) is still in the compound of the monastery and is worshiped by devotees! It is said that earlier it was a proper functional gompa with a lot of monks staying and studying there… But after 17th century it has been lying barren. And the natural forces of Spiti valley have ruined the other structures except the monastery! It is so amazing that even the structures and idols in the monastery haven’t been dusted since ages and it is preserved in it’s “purest forms”!

“Lhalun” means Land of Gods and Lhalung Devta is the head deity of all the Gods of the region.. Legends also have that the color of the mountains around the monastery changes depending on the mood of the Deity.. Red when angry, blue when hurt and yellow when happy! When it was built, it was a Chosor, an ancient center for learning and debate… But with time the rulers have changed and Lhalun is now a small village with 45 houses.

The most amazing thing about the monastery i found was its barrenness and yet a an aura of something powerful! It’s a small building attached to rock surrounded by ruins of structures. I met a German lady with a tour guide who was explaining her about the existence of this place of worship, and that is how i came to know as well!

The irony is that most travelers who go to Spiti valley, don’t visit this monastery, even the cultural travelers! It’s micro size and non-popularity doesn’t make it any less amazing, rather I believe that is more of a reason to explore the village and monastery as it has a number of mysteries hidden which tells amazing stories!

How to Get There??

It lies in Between Tabo and kaza. An hour drive from the Dhankar Monastery. We chose the Tabo-Kaza route..

Most people traversing this route know about the Dhankar Monastery and Lake and visit there.. Just before reaching Sichiling, you get a right turn towards a road connecting to Dhankar Gompa. With beautiful numerous hairpin bends.. Crossing them you reach the new building of the Dhankar Monastery and a guest house! It’s a beautiful one and the view is amazing. Below this lies the Dhankar Village (which used to be the district capital of Spiti before Kaza) and the old Dhankar Gompa is extremely mesmerizing.

When here, you must visit the monastery and go for a short trek to the Dhankar Lake!! The lake is beautiful and picturesque and the tiring one and a half hour trek is totally worth it! Spend a while at the lake and come down to the Monastery. You may stay at the guest house or at a local home-stay if you wish to explore more.

Now instead of going back to the main road, continue on this route towards Lhalung Monastery. You will cross small villages like Tulse Pena and reach Lhalung in an hour.. You can spend a while there, make a wish at the willow tree and explore the village. Leave Lhalung and continue on the route beside a Spiti river tributary.. You might feel lost as there is bare minimum human civilization… Cross Rama Village and in a while you would be on the Highway to Kaza!

If you wish, you can take another right from a little ahead (near Lidang) on the highway towards Demul or Hikkim and Komik!Which are another mysteriously beautiful places Spiti has nestled within itself!

The Roads are almost magical. Great effort of the government to maintain them! And the entire journey is picturesque. This little stretch of Lingti Valley that we cross is going to remain etched in mind forever. You might also spot animals like deers, kiangs etc on the roads! From Harsh mountains to riverbeds, from natural rock shapes to beautiful farms and houses!! These are just to 2 of the “Must Do’s in Spiti” for a traveler.. It has engulfed many amazing secrets in its pocket, yet to be explored by mankind!