Mahabalipuram - The Architectural Marvel of Pallavas 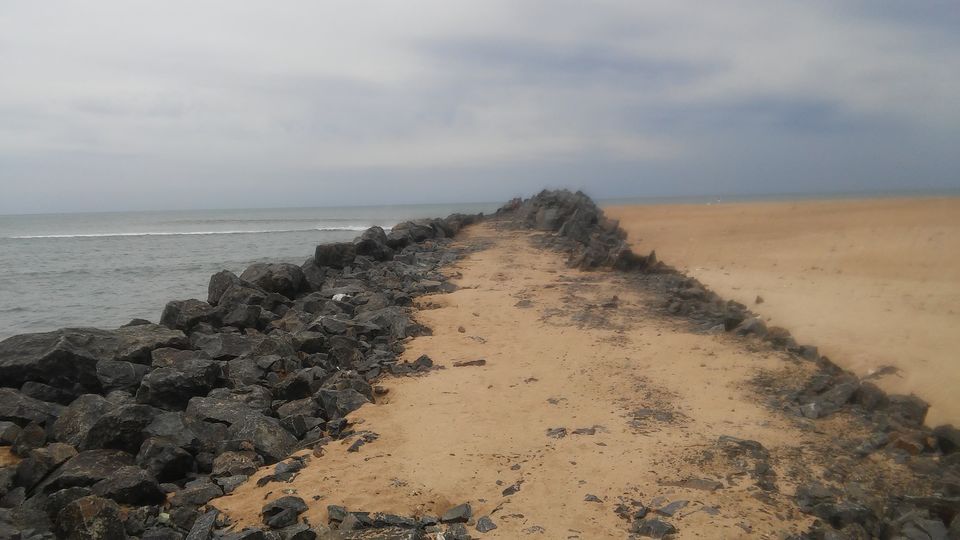 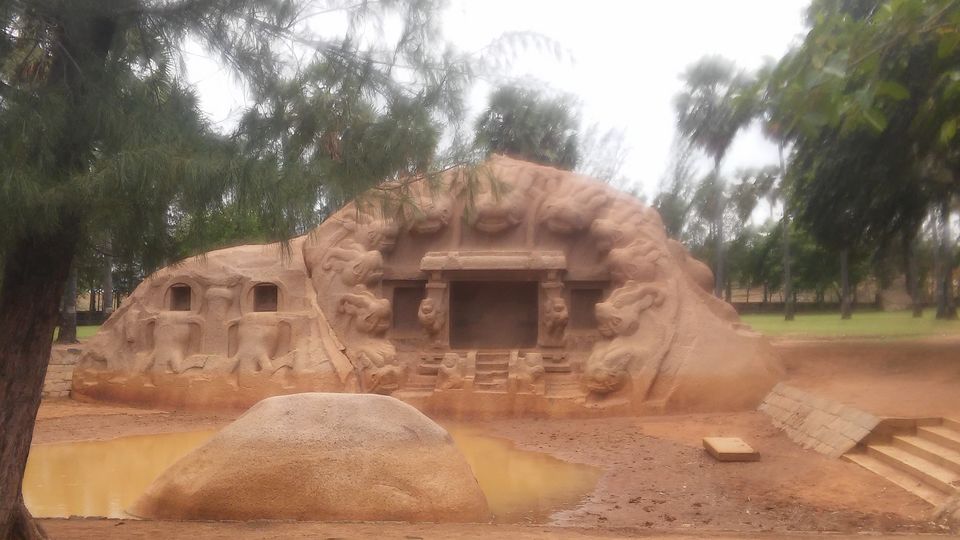 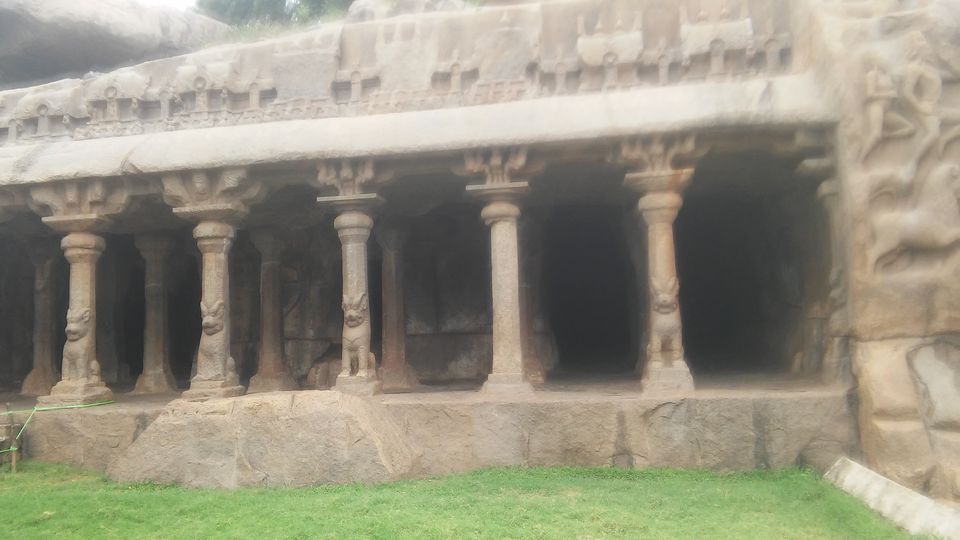 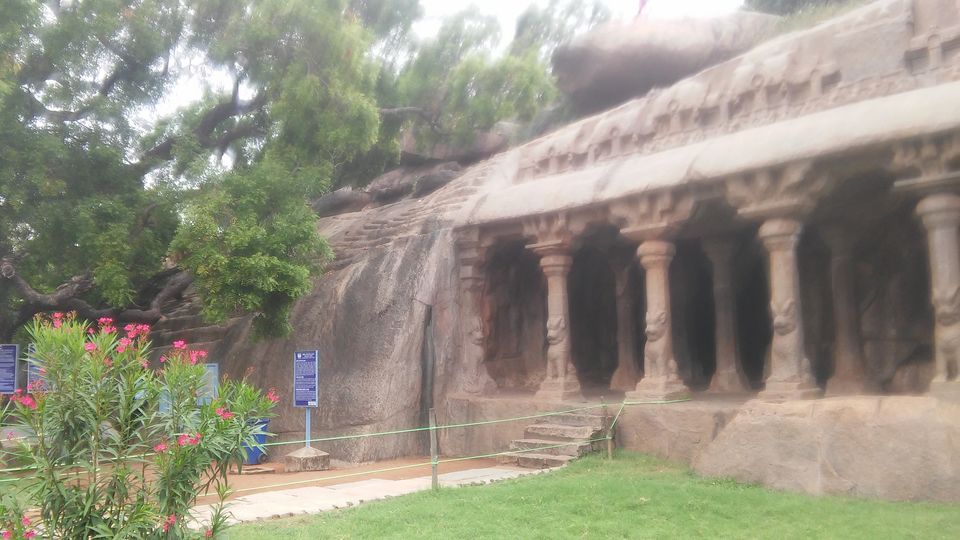 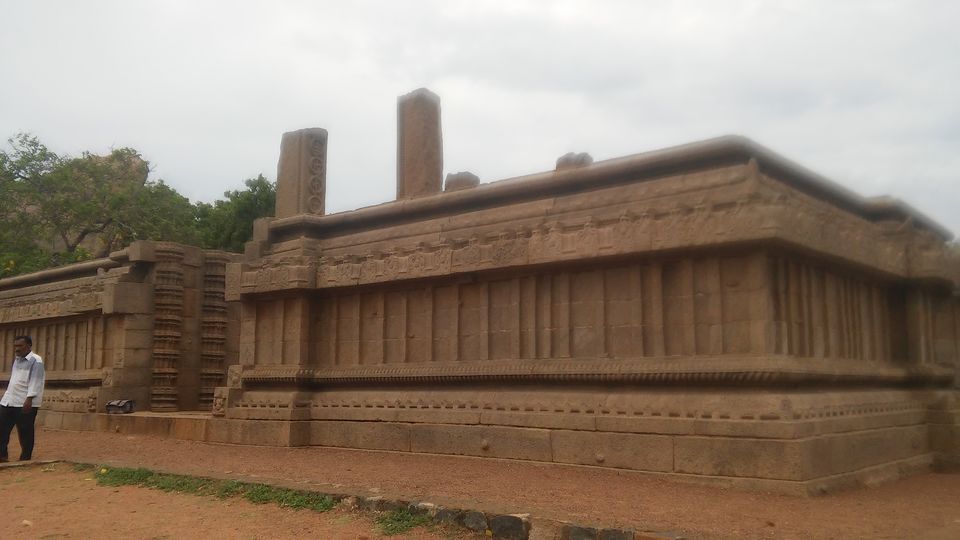 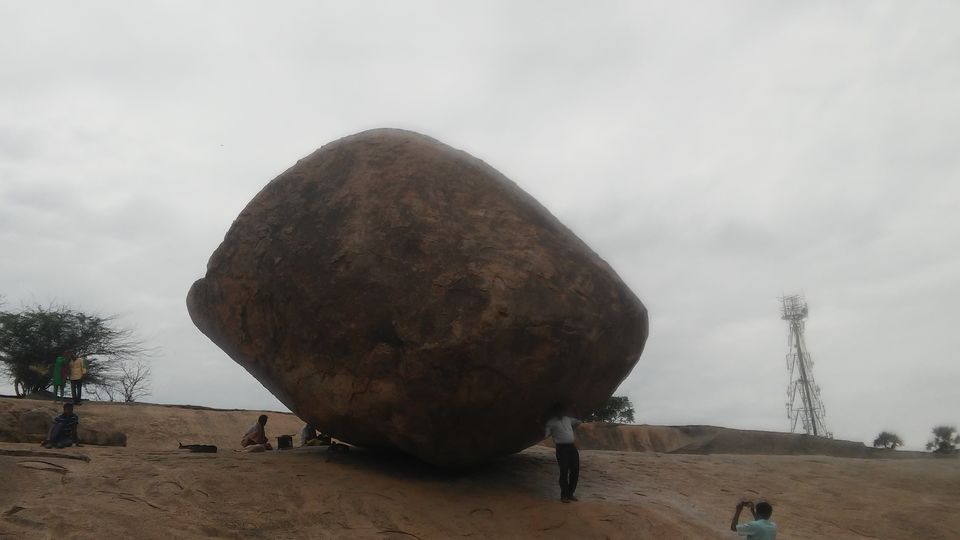 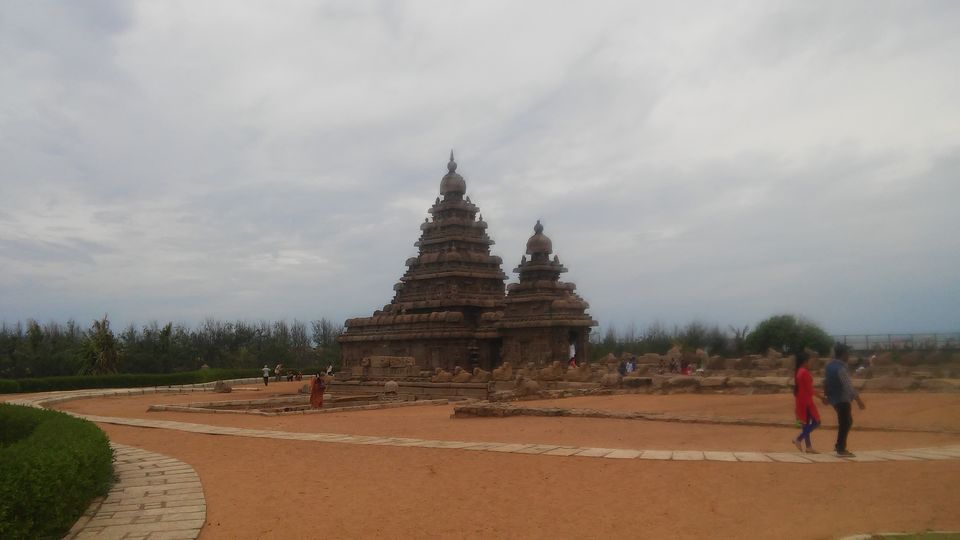 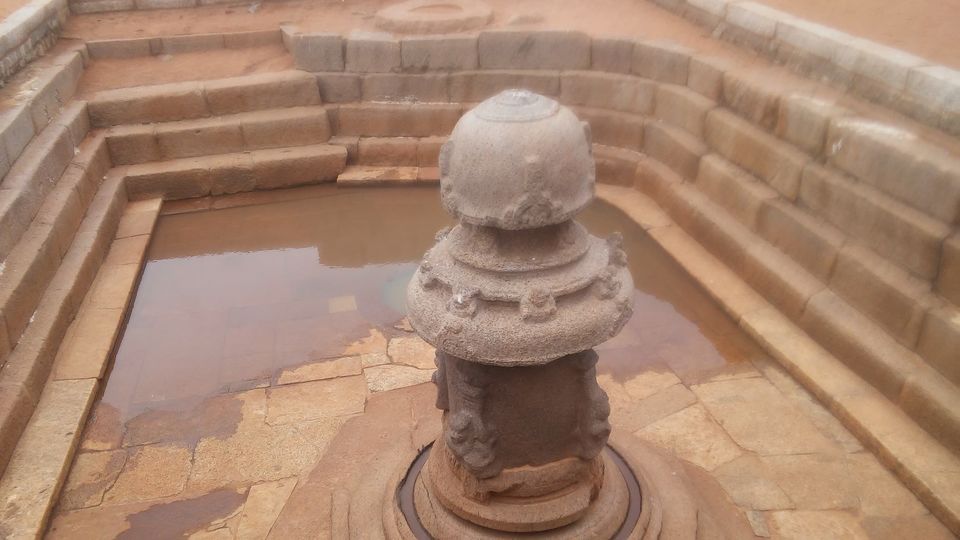 Sky view from inside shore temple 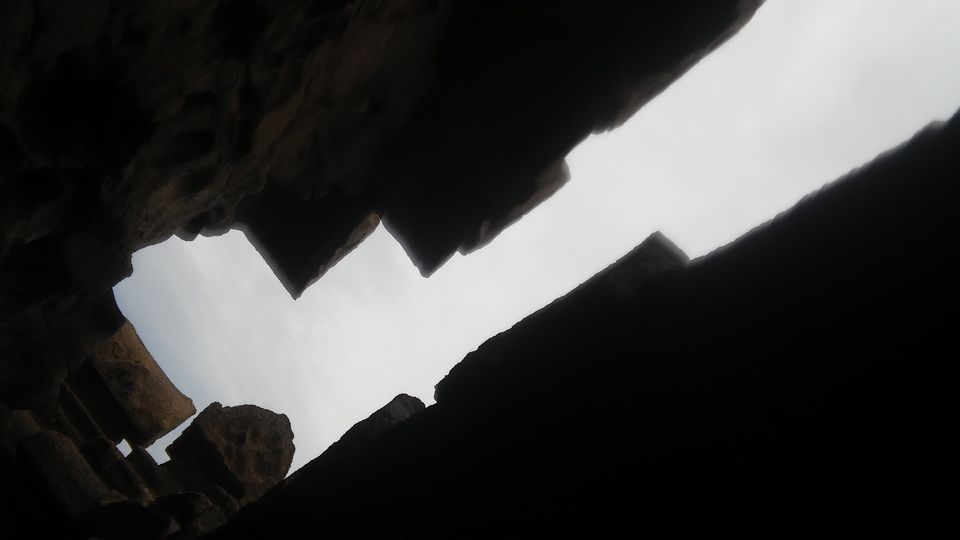 View of Sun from the temple 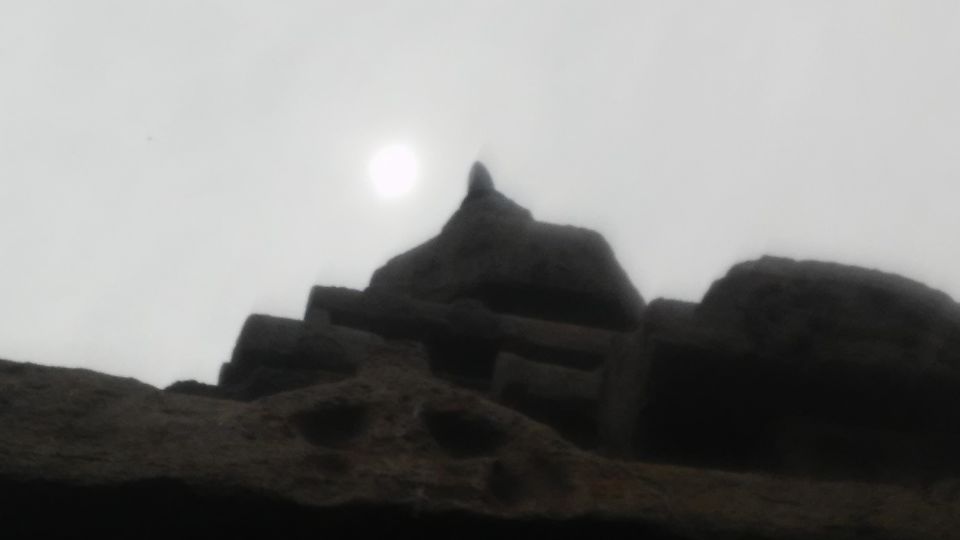 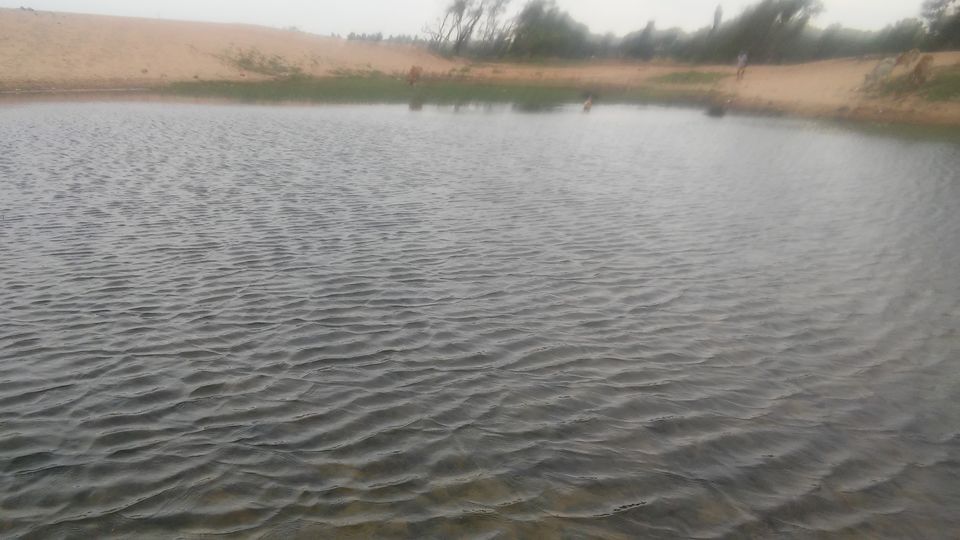 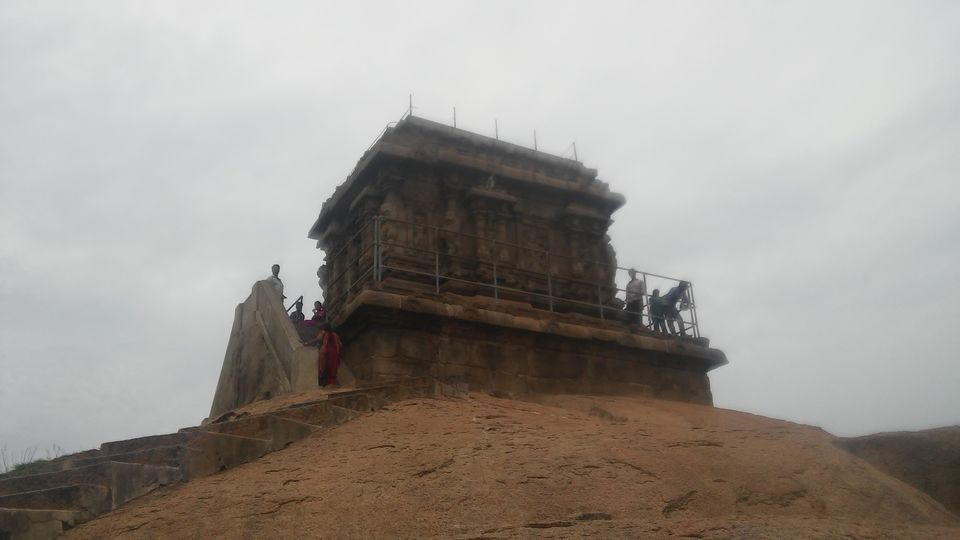 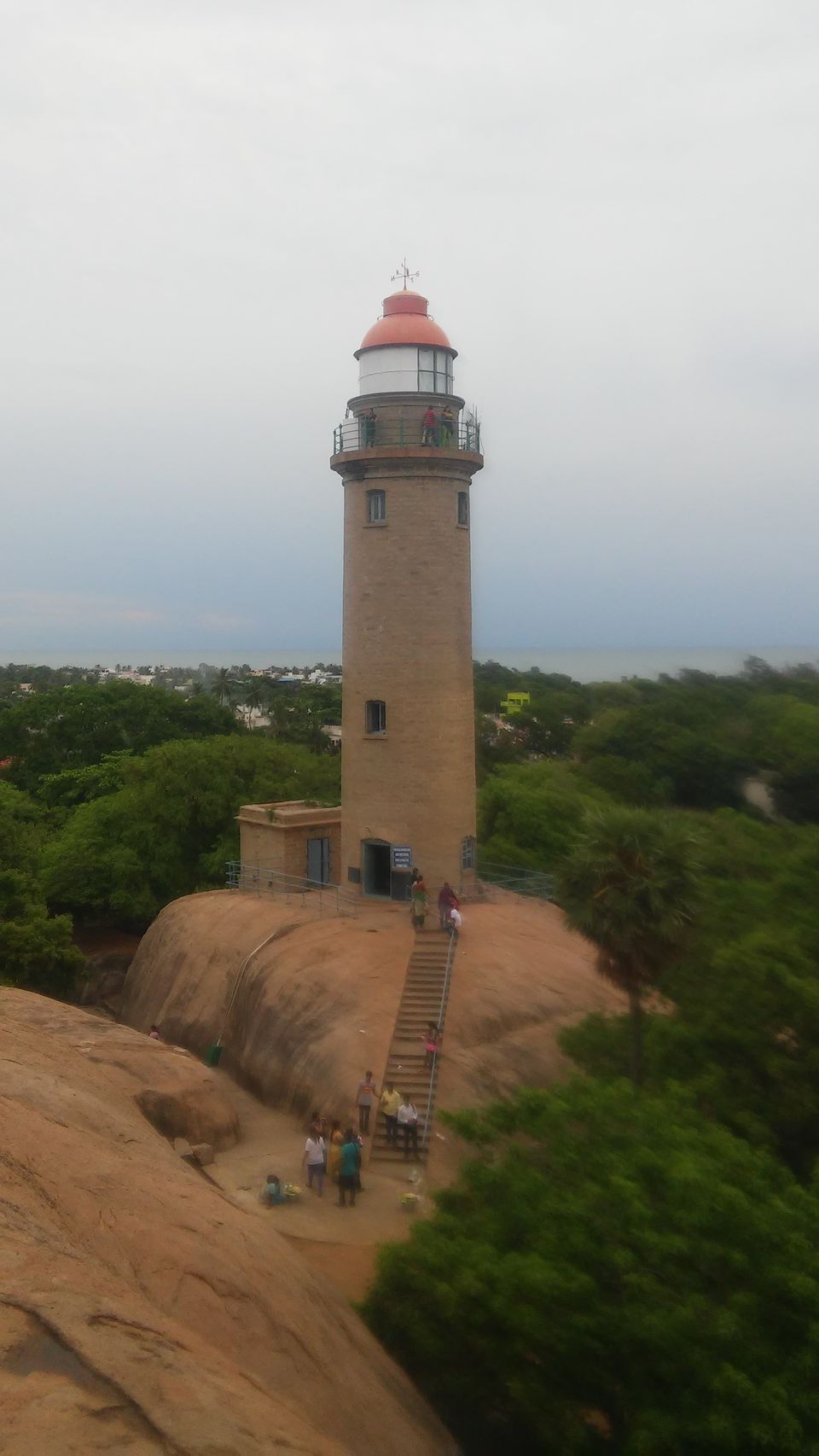 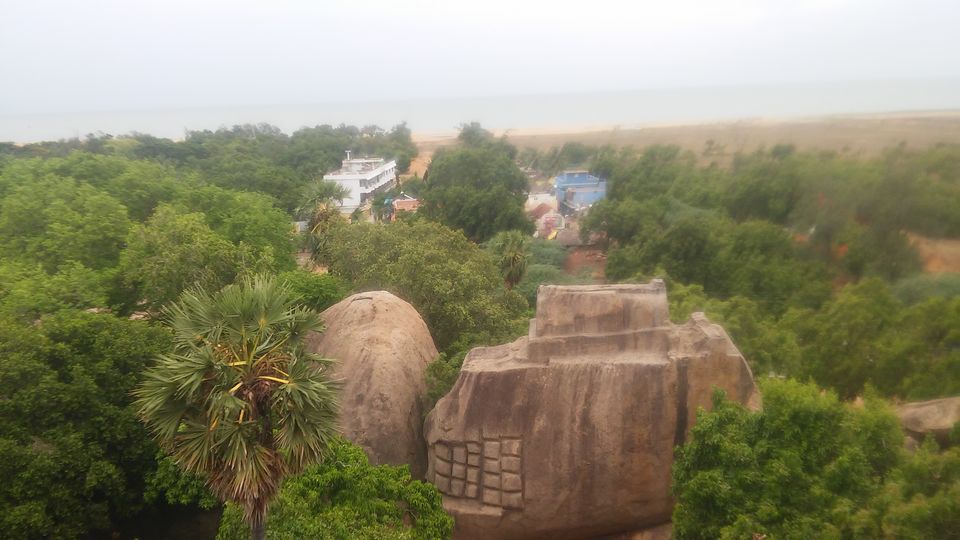 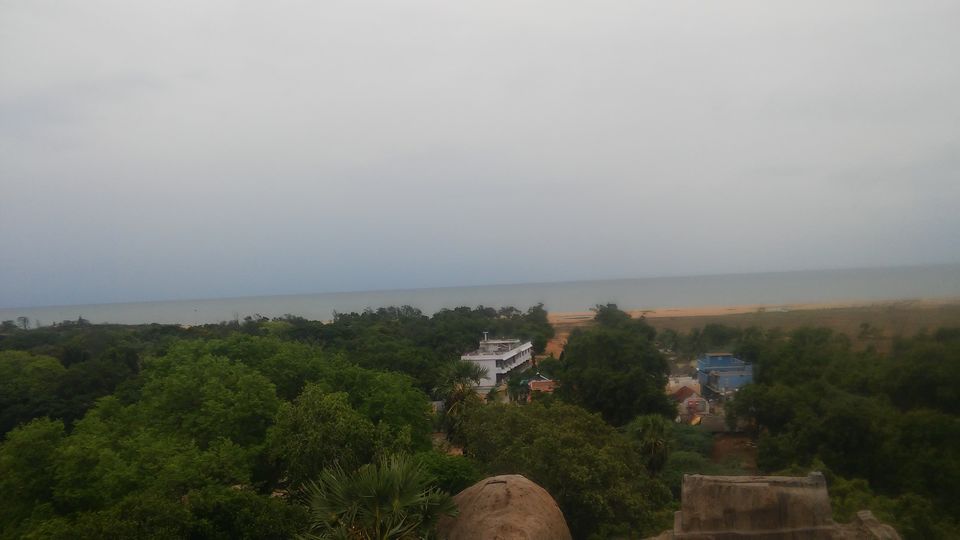 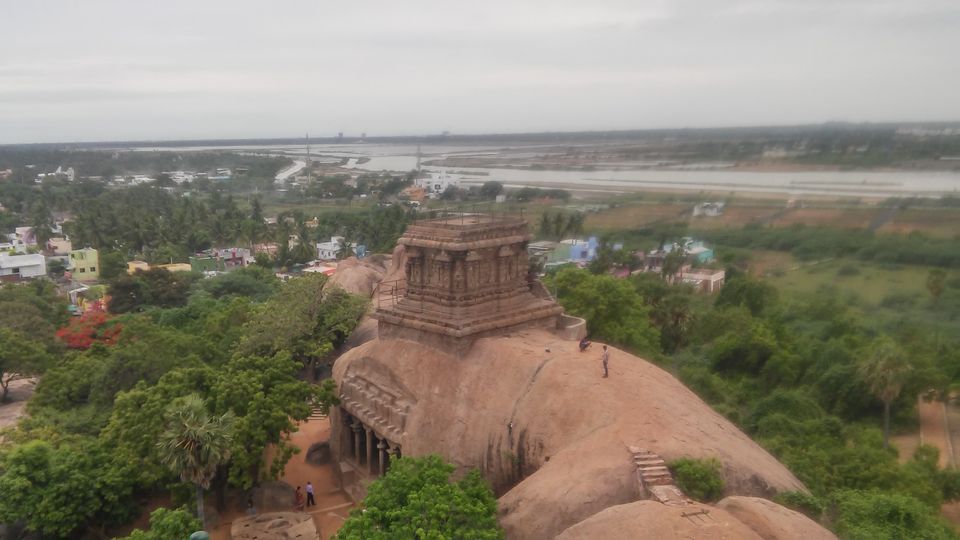 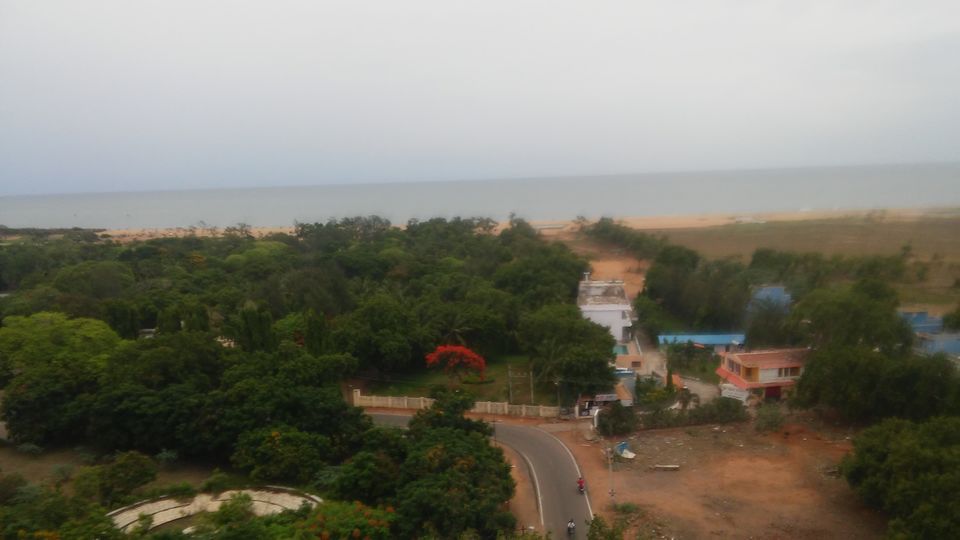 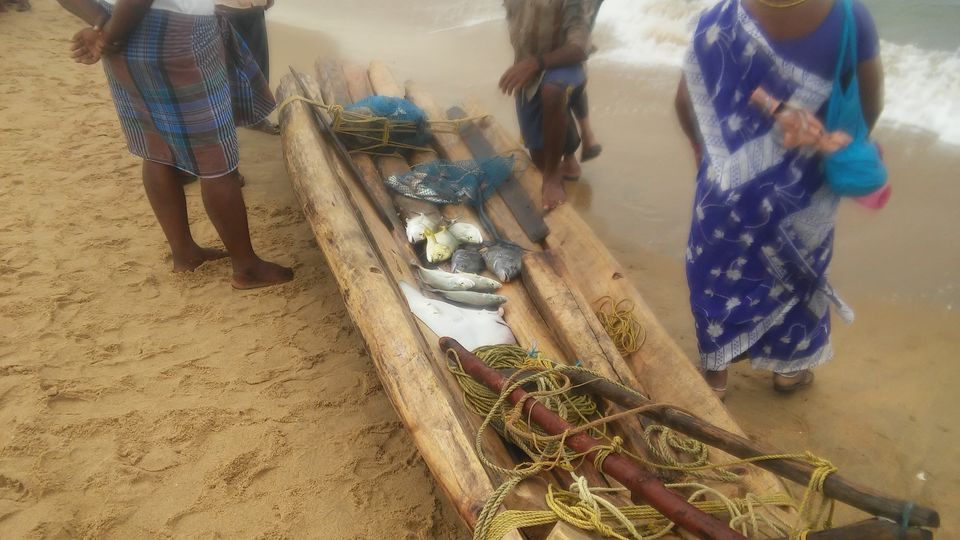 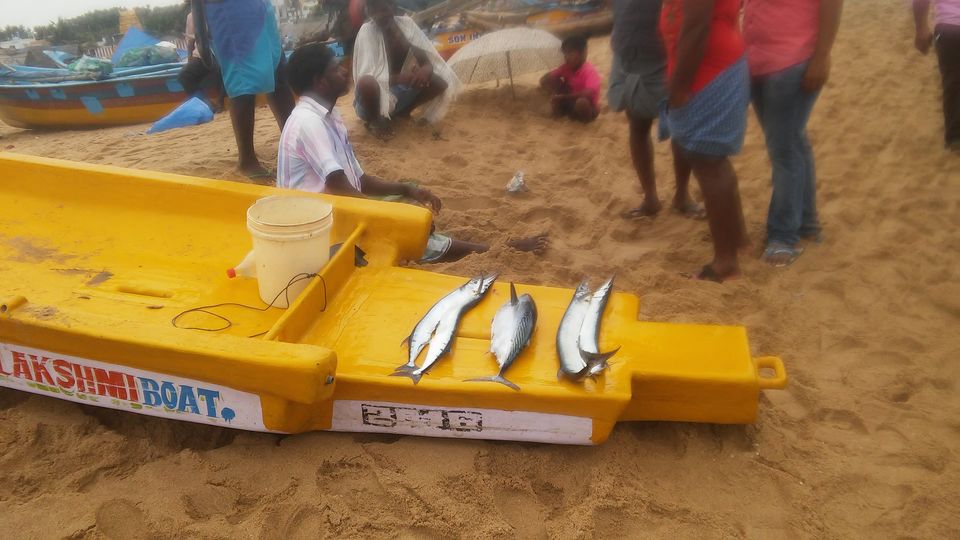 Mahabalipuram or Mamallapuram, a Pallava era town in the East Coast of Tamil Nadu and 55 Km from Chennai is the best play to spend one full day when you a get a days leave from office. Since I got leave from my office my mind decided why shouldn't I go for a bike ride in the East Coast Road and spend the day in Mahabalipuram. After navigating heavy traffic in the busy Rajiv Gandhi Salai, I proceeded in the scenic East Coast Road. In between I decided to stop at many places which gave a wonderful view of the sea. The first such place was "New Beach" near the "Vivanta by Taj" resort. To reach the beach one has to take a left after the muthukadu boat house bridge. The location is not available in the Maps and you have to search for Taj Vivanta. Once you reach Taj vivanta, you need to go straight past Vivanta and there are directions which leads to the Beach

New Beach,Kovalam - New Beach is a small and a beautiful beach 31 km from Thiruvanmiyur. It gives the view of the East Coast Road and the Siruseri IT park. You can ride your bike into the beach. Cars have to be parked in front of the beach. After parking my bike inside the beach I followed the rocky path which goes few meters inside the sea. The beach is silent as many people do not know about the beach, unless you are Google Maps freak. Be careful when climbing on rocks. After 30 minutes spending there I again started from the place and the next stopped at Tiger Caves before Mahabalipuram

Tiger Caves - Tiger caves 18 km from the New beach and 4 km before Mahabalipuram are  rock cut caves built by the Pallavas and series of natural rock formations. When you travel along the East coast road there is a board in the left side of the road which shows the way to Tiger Caves. There is no entrance fee but you have to pay parking fees with no tokens given. The caves are located in midst of sprawling lawn well maintained well by the ASI. This place has less visitors compared to monuments in Mahabalipuram as people are not aware of this place. Moreover there is nothing much to see inside except a single cave with some rock cut sculptures and of course annoying couples who occupy the benches inside that place. However there is a beach behind the caves which is calm and very serene and you can spend some quality time in that beach. After starting from Tiger caves my next stop was Mahabalipuram.

MAHABALIPURAM - Mahabalipuram or Mamallapuram, a World Heritage Site  is a Pallava era town which is 55 km from Chennai. Once you enter the Mahabalipuram town which is a right deviation from the East cost road you get a feel as if you are entering into the Pallava kingdom. Mahabalipuram is famous for rock cut architecture which can been through out the town. Shops with huge rock cut sculpture is a testimony of the uniqueness of Pallava architecture.

Arjuna's Penance:- Arjuna Penance is a huge open air rock carved out during 600AD. There is no entrance fee to that place. This is said to be the place where Arjuna one of the Pandava brothers did penance to get the Celestial weapon Pasupastra from Lord Shiva. It measures 30 meters in width and 15 meters in height and is full of life size figures.  Its so huge that it is difficult to take a single picture of the whole place

Krishna's Butter Ball:- The icing on the cake goes only to the Krishna Butter Ball which is the main attraction of all the places. It is a 5 Diameter and 250 tonne huge balancing rock standing on a slippery area of the hill. You can imagine how a rock is stationery in such a place for more than 1200 years. There are many theories about the rock but still there is no final conclusion about how the rock was formed. No doubt this is one thing which defies laws of physics

Trimurti Caves:- Trimurti cave temple is rock cut temple dedicated to the three murthy's of Hinduism; Shiva, Brahma and Vishnu. There are three sanctums with three idols. The left one being Lord Brahma, the right being Lord Vishnu and in the middle the Lord Shiva. Trimurti caves is entirely different in architecture from the remaining monuments in Mahabalipuram

Mahishasuramardhini cave:- This rock cut cave made of granite is devoted to Goddess Durga who got the name Mahishasuramardhini after slaying the unconquerable demon Mahishasuran. However I couldn't see anything as the sanctum was closed with a lock. However you can spot some sculptures of elephants and lions around the cave temple. The Lighthouse is behind this cave

Shore Temple:- Shore temple as the name suggests is located in the Shores of the Bay of Bengal built by Narasimhavarman II, the greatest of the Pallava Kings. You have to pay Rs. 30 for the entry ticket and Rs.10 for the bike parking. The present temple is said to be the one of the seven Pagodas of Mahabalipuram out of which six submerged in Sea. However after the Indian Ocean Tsunami in 2004, few other rock cut temples and scriptures built during 7th to 8th century were discovered. There are totally three shines in the temple the two being to Lord Shiva and the one to Lord Vishnu. The big shrine is devoted to Lord Shiva and two other small shrines belonging to Shiva and Vishnu. Vishnu is found to be in reclining position inside the shrine and is said to be the first one to be carved. You get magnificent views of the sky from inside these shrines

Mahabalipuram Beach:- Mahabalipuram beach is just on the right side of the shore temple. The beach is usually little crowded during the weekdays. One can walk a kilometer on the right side of the beach to reach a pier where the boats are docked. You get to see cows and pigs drinking water in a pond inside the beach. Do not miss to have hot bajjis and pani puris sold by the vendor in the beach. You can also go for a horse ride

The Five Rathas:- The Five Rathas devoted to the Five Pandava brothers, Dharmaraja, Bheema, Arjuna, Nakula and Sahadeva. Each if them is unique and has different layout made of granite which has stood the salty winds and the Indian ocean tsunami. There is even Draupadi Ratha which is the last one after the Pandava Rathas. Near the Dharmaraja Ratha there is an independent stone sculpture of the Nandi bull. Since I was really tired I couldn't go inside and has a view from the outside the gate. However I paid for the parking unnecessarily. After the Five Ratha's I proceeded back to Chennai. The next place I always wanted to visit is the Kovalam beach which is 25 km from Mahabalipuram.

Kovalam Beach:- Kovalam or Covelong as its called colloquially is a small fishing village in the East Coast Road. It is one of the places where there is a surfing school. There are lots of buses to Kovalam via East coast road or via Kelambakkam in the OMR. The beach was very serene and bustling with Fish sellers and tourists. The advantage of visiting this beach is that you can buy fish which was just caught from the sea. You can see many boats speeding to the sea shores and people surrounding the boats and bargaining with the fisherman to buy fish. This is a perfect place to capture the business of selling fish, the way people bargain for fish. After taking some snaps I left this place and proceeded towards my house via the Old Mahabalipuram Road or OMR avoiding the busy ECR stretch

6. The group of monuments in Mahabalipuram

8. Indian Sea shell museum, the biggest museum in India- opposite to Five Ratha's