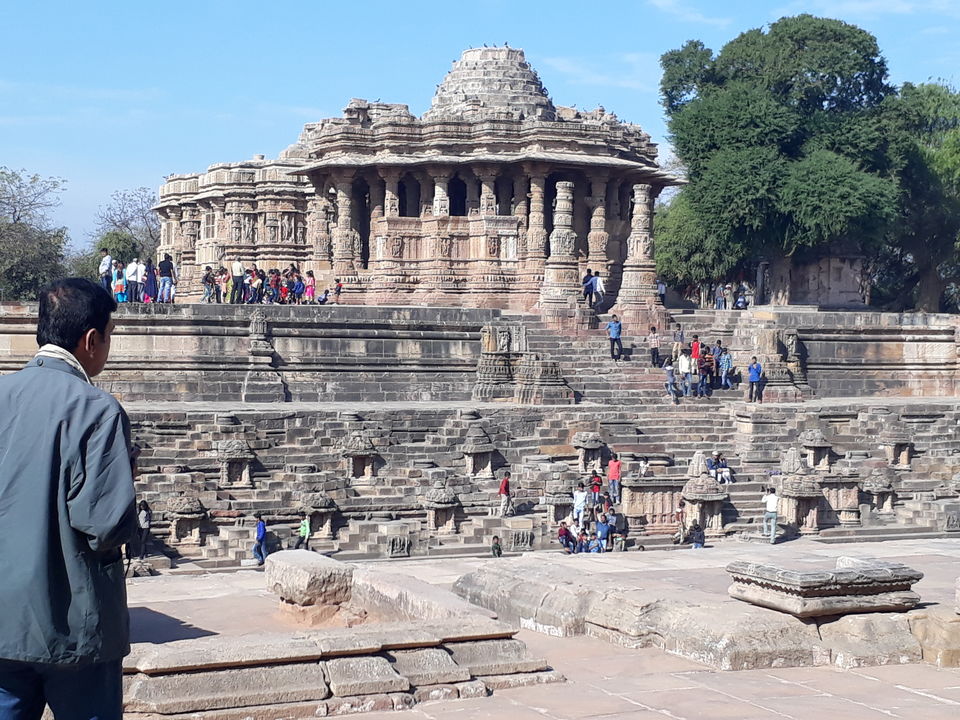 After watching the advertisement by Amitabh Bachchan promoting Gujarat tourism two places mentioned by him made us curious . The first one was the Sun Temple at Modhera and second Rani ni Vav at Patan.

Taking into account the two connecting holidays alongwith the weekend, we decided to visit these two spots which we were unaware of until the Gujarat tourism promotion ad. After doing a bit of research we realised that these two places could be visited keeping Ahmedabad as the base. Since we had not covered Gujarat yet as a part of our travels,we decided to foray into Gujarat by visiting two places of historical importance.

Since travelling by road could take almost an entire day to reach Ahmedabad (Mumbai -Ahd is 526 kms ) to save time we decided to travel to Ahmedabad by the Shatabdi Express which leaves Mumbai at 6.15 am and reaches Ahmedabad at 1.30 pm. The travel is also quite comfortable with breakfast and lunch being served on the train. After checking in into a hotel at Law Garden we decided to explore Ahmedabad in the afternoon ( Read my blog on Ahmedabad for details)

Next day we left for Modhera which is approx 2 hours by road from Ahmedabad by a hired car.The Sun Temple is a Hindu temple dedicated to the sun deity Surya located at Modhera village .

It was built after 1026-27 CE during the reign of Bhima I of the Chalukya Dynasty. No worship is offered now and is protected monument maintained by the Archaeological Survey of India. The temple complex has three components: the shrine hall ( Garbhagraha); the assembly hall ( Sabha Mandapa) locally known as Sita Chavadi and the reservoir ( Kund) initally called the Surya Kund but now called the Ramakunda. The halls and the exteriors have intricately carved exterior and pillars. The reservoir or the kund has steps to reach the bottom and there are numerous small shrines alongside in the kund.

The edifice is an example of architectural artistry at its creative best, with every inch of its exterior carved exquisitely with motifs of the Hindu pantheon of deities, apsaras, blossoms, birds and animals.

The inner sanctum that once housed the idol of the Sun God( it is believed that the idol was made of Gold and was taken away by Mohammed Ghazni) is dark and was so designed that at solar equinoxes ( 20th March & 21st September ) , the idol and the sanctum would be illuminated by the first rays of the rising sun.

The SabhaMandapa is a structure with an octagonal form with 52 pillars (equal to the number of weeks in a year) with carvings depicting scenes from Hindu epics like the Ramayana and the Mahabharata. The exquisitely carved pillars portray scenes from the Ramayana. The exterior of the temple is also intricately sculptured and the beautiful assembly hall is carved with scenes from the Mahabharata. On its outside walls are some carvings of amorous couples similar to that at Konark or Khajuraho.

The Surya Kund or the Ramakund is the temple tank with an awesome interplay of geometric patterns laced with pyramid shaped stairs to take you down to the water level. 108 miniature shrines are carved in between the steps of the tank divided by four levels.

There are also bigger shrines with idols of Hindu gods and goddesses like Shiva ,Ganesh,Vishnu ,Sitladevi intricately carved in stone in between the steps.

A flight of stairs from the Surya Kund leads you up to a pair of tall stone pillars forming a gateway (actually an archway with the arch missing) leading you to the Mandapa. The temple is an architectural wonder. No mortar or cement was used to join the stone bricks, instead they were interlocked together to create a structure resistant to earthquakes.

Many of the sculptures are defaced due to invasions by ruthless conquerors. However the temple with its remaining carvings and sculptures is still worth visiting. The time taken to sightsee this temple is 2-3 hours.From here we proceeded to Patan which is 45 minutes away from Modhera. The trip to Modhera & Patan can be completed in a day before returning to Ahmedabad in the evening